Home Berthon Blog ‘A feat of survival, sleep deprivation, and a desire to take on the world’s toughest seas’ – Volvo 70 SANYA LAN

‘A feat of survival, sleep deprivation, and a desire to take on the world’s toughest seas’ – Volvo 70 SANYA LAN 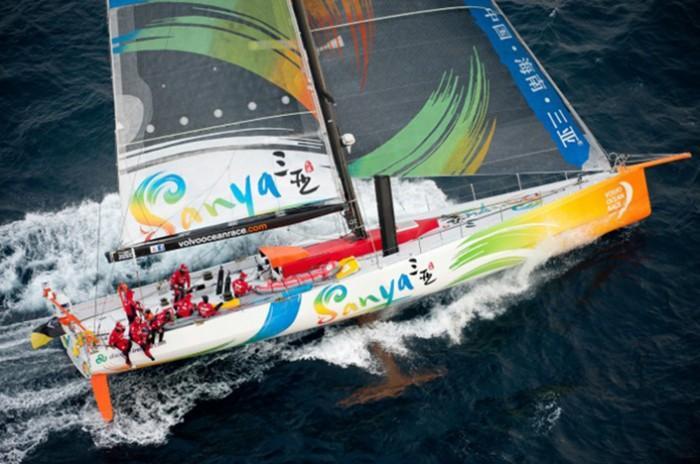 The myth has it that the Volvo Ocean Race started over a beer in a Portsmouth pub. The years fly by and yet it is still a feat of survival, sleep deprivation and a desire to take on the world’s toughest seas in a competitive environment. When Robin Knox-Johnston came home a hero in 1969 having completed the first nonstop circumnavigation, an idea spawned over a pint or two. Guy Pearce and Anthony Churchill were convinced that there was potential for a crewed race following the trade routes around the world.

Skippers were press ganged with the lure of adventure and tropical sailing, the Royal Navy were sold the idea of running the race and in 1971, over many pints of his brew, Colonel Bill Whitbread of the brewing family was persuaded to be the headline sponsor. In the first issue of the race, 17 yachts with 167 crew in total left in 1973 navigating with sextants and dead reckoning heading to Cape Town. The yachts were mostly Bluewater cruising yachts of the time, and although there were paid skippers, the rest were adventurers and stepping into the unknown. Stories unfold from this first race of 6 bottles of wine per day and crew having their own cabins. 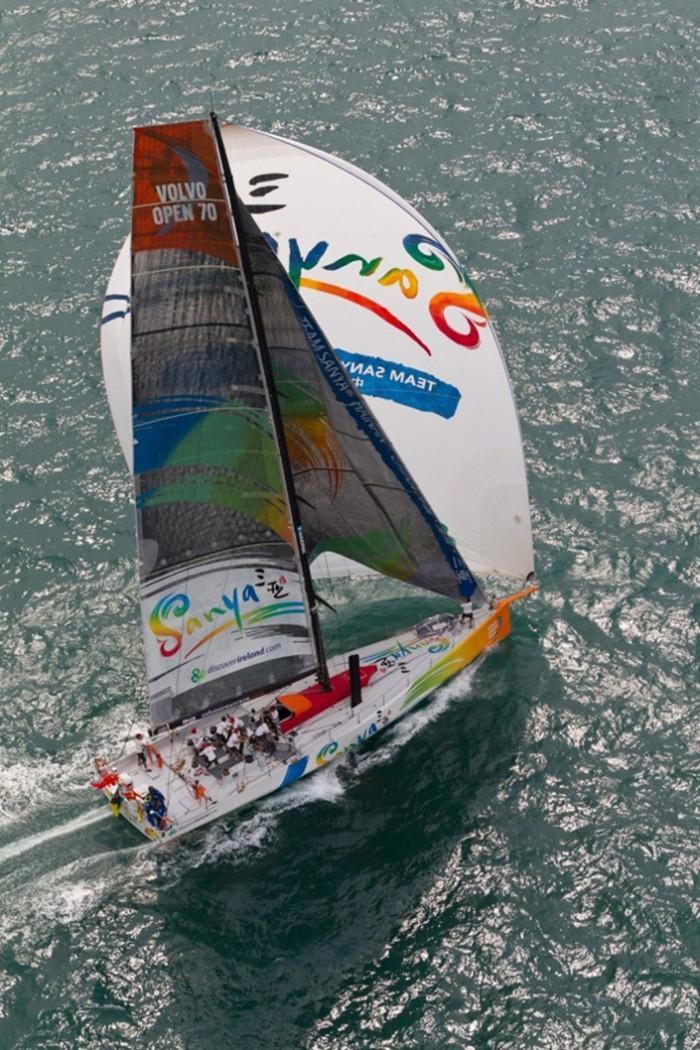 Fast forward four decades of technology, development and commerce, and the yachts now are double the speed, with half the crew; they are now close to achieving 600 miles per day. They are built using the same materials more often found in Formula One cars and space rockets. The course is now less of the trade routes and more a tour of the commercial partners of the race; such is the necessity in the more commercial sports world. The yachts are now built and owned as a marketing exercise, as opposed to private individuals in an adventure of a lifetime.

TELEFONICA BLUE was built by Telefonica, the Spanish Telecoms giant as a huge effort to win the 2008/2009 edition of the race. She was built in Carbon and Honeycomb laminate with every effort to make her the fastest and lightest yacht in the class. She was built in tandem with TELEFONICA BLACK, a joint entry in order to trial against each other to fine tune performance before the start of the race. All went well, she showed excellent promise in the inshore events, winning 4 out of the 7 races, and won two of the offshore legs, to come in 3rd overall. 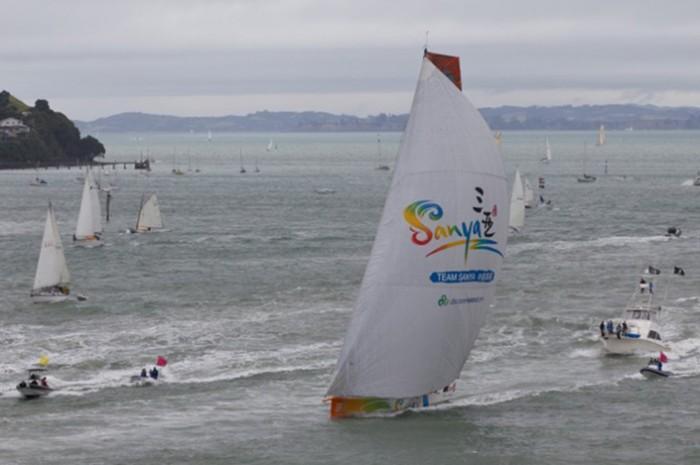 Team Sanya were the Chinese entry for the Volvo Ocean Race in 2011/2012 skippered by Mike Sanderson, the outright winner of the 2005/2006 race. The team was funded by the Sanya government as a promotional exercise, and included a stopover in Sanya, the “Hawaii of the Orient”.

The course for the 2011/2012 Volvo Ocean Race was radically changed from previous incarnations, due to mounting commercial pressures and partners all over the world. The new course to accommodate China, Middle East and others became more suited to light wind yachts than the previous course featuring heavily in the Southern Ocean.

As the team was a very late entry for the Volvo Ocean Race, the project for Team Sanya was to purchase the best yacht from the previous race. Thus Telefonica Blue was purchased and sent to the UK for a refit. 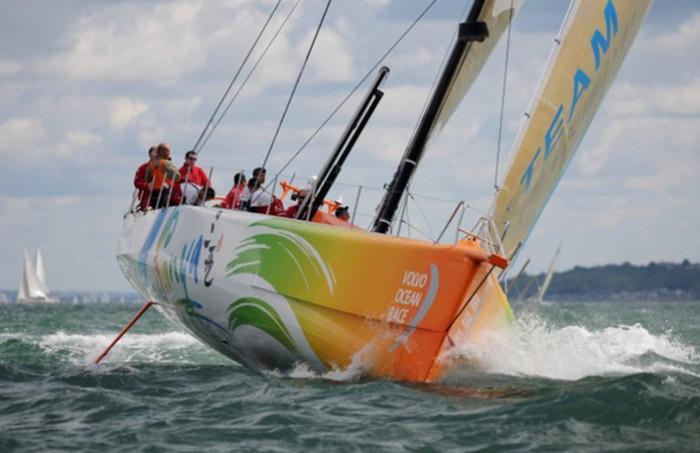 She emerged as SANYA LAN. The team was not only late with the purchase of the yacht, but also with the hours of data and sail development that had been undertaken by the other teams prior to the start. Thus they were always on the back foot from the start.

Volvo 70’s are proving to be amazing IRC offshore yachts, delivering fast and fun sailing yachts for the same price as a new IRC 40 ft yacht. Running costs are of course higher, but they have proven to be able to run on modest budgets, and adventure charters are also gaining popularity. 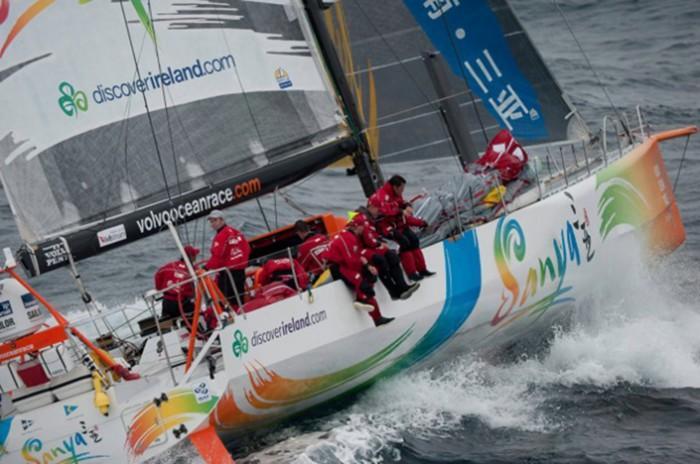 SANYA LAN is now available exclusively through Berthon, who have over the years been very involved with the Volvo Ocean Race and the teams. We have sold many of the Whitbread Maxis, the Volvo 60’s and the Volvo 70’s, some more than once!

Sanya Lan Volvo 70 has now been sold, but please contact ben.cooper@berthon.co.uk for more information on other Volvo 70’s and Performance Yachts available from Berthon International or use the Berthon Brokerage Search  to view all our race yachts