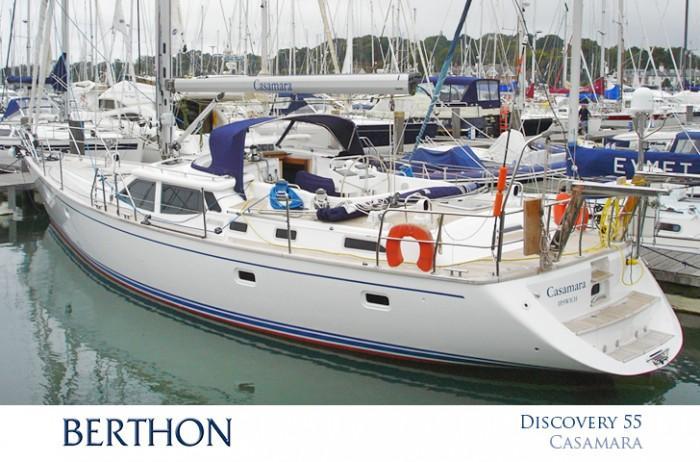 Perfectly formed for blue water, she has form as an ARC contender and also for participation in two ARC Portugal’s. Conceived, built and equipped for easy shorthanded family sailing she has been much updated in this ownership and this is why –

From the Owner’s Perspective

CASAMARA in action during the 2011 ARC.

They allowed me to evolve from Day Skipper to Yachtmaster and I even skippered my own yacht in the 1979 Fastnet.  I have fond memories of them all and the learning curve has been immense.

Prior to buying CASAMARA, it was my ambition to skipper my own yacht in the ARC, and I quickly identified that the Discovery 55 was the perfect yacht for the expedition with her build quality, short-handed sailing abilities and nav. table visibility whilst underway. She is also solid, graceful, designed for bluewater sailing and easily managed by a husband and wife team.

I certainly did not want to have to rely on a professional skipper (I am a bit of a control freak) and I also have a great group of friends with lots of sailing experience.

So, I started the process of commissioning the build of a new Discovery 55′ when I had a major stroke of luck.   CASAMARA popped onto the market, having been highly specified for world cruising, but her first owners’ change of plan meant that she only had a sail to Gibraltar and then back to Lymington to be sold, beneath her keel.  She was just what I was looking for and she was immediately available!

So in April 2010, we had our maiden sail aboard CASAMARA to St Peter Port for VAT reasons and then back to the Medway River.  CASAMARA (also known as CASY to her friends) has subsequently achieved the programme below –

This all adds up to around 20,000 nautical miles – not as much I would have liked as family and sailing a desk still exist.

Throughout all these trips, I have always felt safe and secure with CASY, she always brings a smile to my face and we are never short of crew to sail her – a testament to CASY rather than my skippering skills!  She has taken me through some foul weather and has always been very forgiving if I have made a poor decision – and there have been a few!

I have had to make very few changes to her but I have upgraded the cooker, installed electric loos (my family are not good pumpers!) and she now has aircon throughout.   She is an easy yacht to look after and to maintain and a Tardis when it comes to storing kit.  She is also easy to manoeuvre and park, especially in reverse.  She is ready to go immediately and I am leaving the EPIRB, liferaft, parasilor, brand new rib and a host of spares to allow someone with a similar dream to leave ASAP.  I am also happy to assist with handover and advice 24/7 as I love talking Casamara!

So why am I selling her?  Well….  I have been seduced by a newer and larger sister, a Discovery 67′, which myself and my wife are planning to sail around the world in, between 2018-2020.  We are sticking firmly with the Discovery ethos – the build quality, after service, the ability to sail shorthanded, and the view from the nav. station and in the saloon whilst underway and at anchor… I could go on and on…

CASAMARA is a Berthon Collection entrant and is ashore at Berthon in Lymington where she can be viewed 7 days a week.