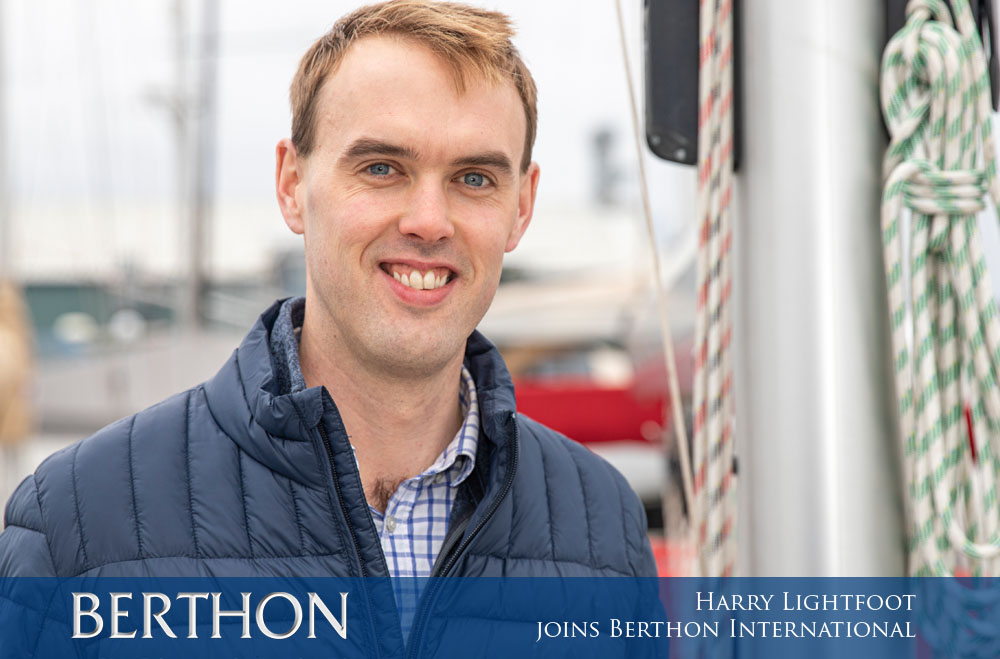 Berthon International welcomes Harry Lightfoot to the Sales Team with immediate effect. Harry was previously the New Sales and Brokerage Manager at Discovery Shipyard, and therefore passionate about and an expert on all things Discovery Yacht Brokerage and Southerly, and a valuable addition to the Berthon crew.

Harry grew up racing Oppies and later RS400s on the River Alde in Suffolk. His yacht brokerage career started in 2016 when he and his now wife moved to Vancouver. There he sold American and European brands of both power and sailing yachts and progressed from racing the River Alde to racing round Vancouver Island by day and skiing by night. During his time in Canada, Harry dealt with a vast variety of yachts, gaining an invaluable knowledge of the world of yacht brokerage.

Three years ago Harry moved back to the UK and joined Discovery. He also got married, and become the owner of an enchanting dog called ‘Banzo’, settling down in the New Forest to start a family. His experience at Discovery has given him a deep understanding of the management of new yacht sales and whilst at Discovery he expanded the brokerage arm of the business, specialising in Southerly Yachts which he successfully marketed and sold internationally.

Harry’s time at Discovery was cut short unexpectedly for reasons that we all understand.

“We have all known Harry since Discovery moved into their Sales Offices in Lymington. We have always had a good relationship with him and as Berthon are proactive in the sales of pre-owned Discovery Yachts we have always kept in touch. The move to integrate the Southerly brand into the Discovery offering is very interesting and having Harry’s knowledge of Southerly is a great asset for us at Berthon.

Team is everything for us and Harry has the same approach to client service and passion for yachts as the rest of us. It is the glue that binds us together.”

“Berthon is the natural next role for me, I am looking forward to working with the whole team and especially moving the Southerly brokerage forward with such a reputable company.”