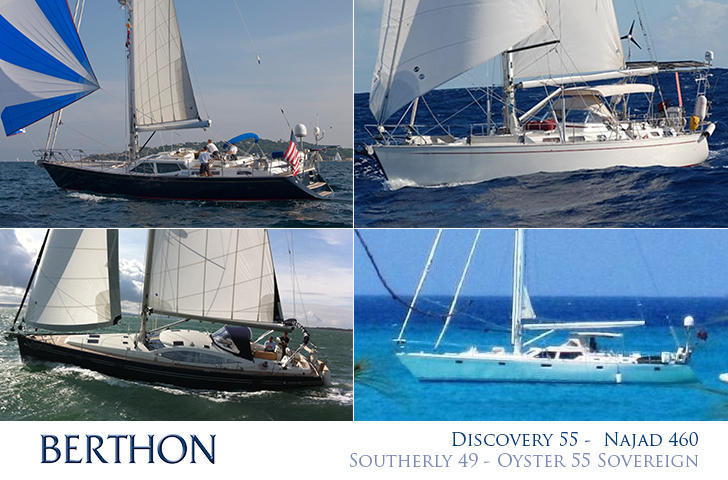 We are well known as the brokerage house that specialises in the sales of blue water cruising yachts.  This month we thought that we would feature 4 mile munchers that we have for sale at the moment in the 45’ to 55’ range – and here they are: 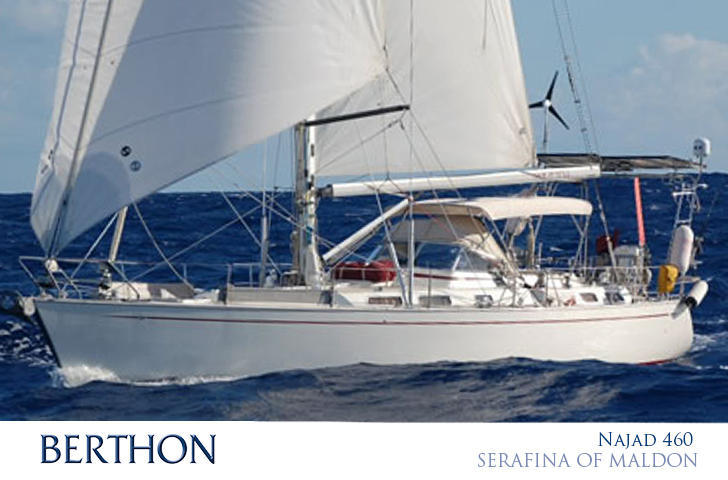 The Island of Orust in Sweden produces some outstanding yachts – Hallberg Rassy, Regina of Vindo, Malo and Sweden Yachts, and of course Najad, to name a few.   Not all these great yards have survived the recession and the vagaries of currency movements, but what remains constant is the superb standard of build and the longevity of the yachts that are born in this small peninsula.

SERAFINA was hatched in 2007 and is a Judel Vrolijk design giving her a slippery sailing performance and sleek good looks.  She comes with the trademark Najad maroon graphics and faultless mahogany joinery below decks, which is virtually unmarked. 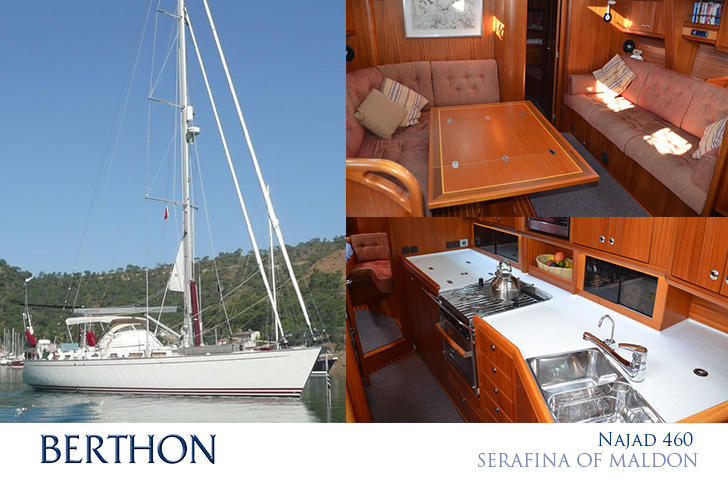 She also has a first rate layout for a couple to sail the Seven Seas aboard with a generous aft cabin, linear galley and huge and comfortable main saloon.  Forward is another generous double cabin with en-suite heads for guests.

Her cockpit offers secure sailing with a fixed screen for protection on those long passages on your way to somewhere stunning.

Furling everything makes her manageable and she has safe, secure decks.

Her inventory features every possible bell, whistle and flute for blue water work from genset to Aqua tow gen to watermaker to Fleet Broadband – and on it goes.

She is ready for her new owner and new adventures and can be seen live at our Lymington HQ. She asks a modest £297,500, so click here for the details – Najad 460 – SERAFINA OF MALDON 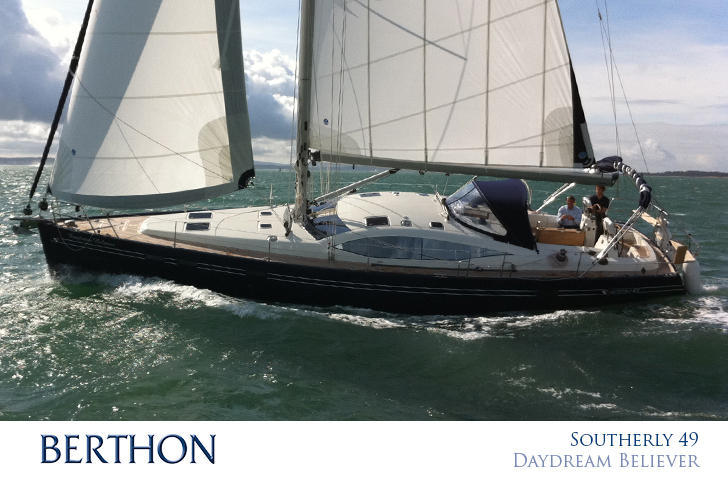 Barely five years old, the Southerly offering from southern UK with variable draft has stacks to recommend it, allowing you to puddle jump as well as to manage blue water cruising.  DAYDREAM BELIEVER is #3 of her series and has a smart dark blue livery and looks great with her unmistakable Rob Humphreys lines.

She has been sparingly used in the Mediterranean and Northern European waters and has a great specification with everything from genset to full Raymarine gear.

Her rig is in-mast with a North wardrobe and she has a self tacker which is perfect to sailing 2 up. 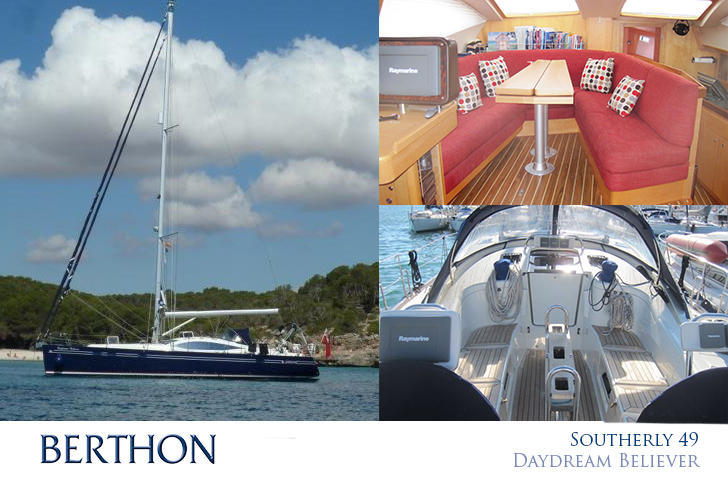 Down below her light wood interior is very airy and she has a genuine decksaloon where you sit down and see out.  There are 2 double cabins aft for guests with a heads compartment at the bottom of the companionway and the owners’ stateroom is forward and is frankly, massive.

Recently reduced in price to a meek £325,000, we feel that this dark blue yacht offers a great deal of blue water potential.  She is rare being recently built in 2010 and is good to go and can be seen in Lymington, literally any day of the week.  Click here for the details – Southerly 49’ – DAYDREAM BELIEVER 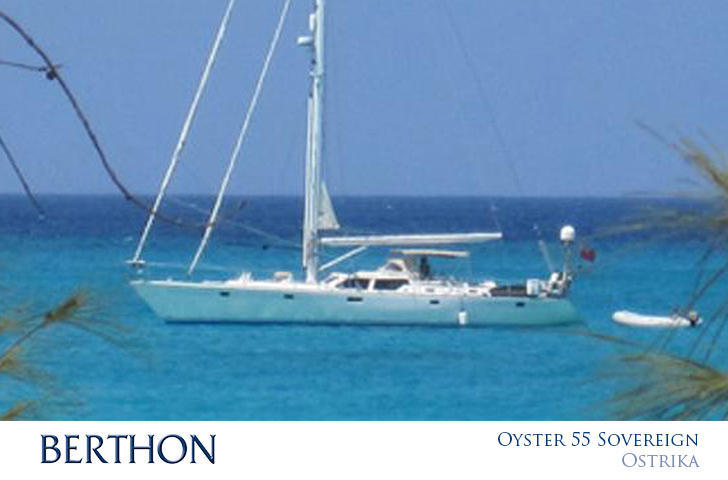 From 1994 this is a yacht that we know well.  The Oyster 55’ from Holman & Pye’s design board is a bit of a legend.  The sisterhood have cruised to every conceivable part of our planet and they have done so in security and safety and without fuss.  As such, they are perfect for blue water adventures, large enough for family sailing, and compact enough that having crew is not an imperative.

From 1994, OSTRIKA has an American Oak interior.  She crossed the Atlantic after launch and cruised in the Caribbean during our beastly winters, spending the summers ashore and tucked up in Trinidad.  Maintained carefully, she has a Northern Lights genset, Hood cutter rig with furling everywhere and plenty of powered winches. 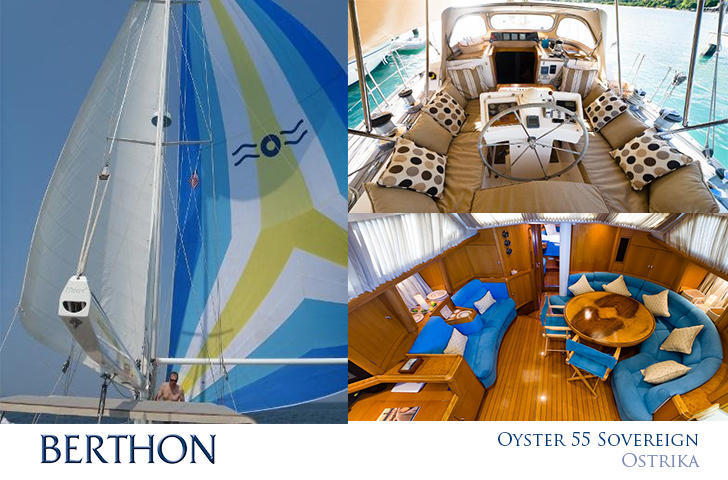 And the trump card is that she was refitted in 2013 and is only now on the market because of a change of plan which has meant that the next adventure is cancelled.

Layout has the vast main saloon, 2 guest cabins and a suite for the owners at the blunt end.

She is long legged, capable and still looks current with her Oyster Sovereign styling.

Lying in Newport, Rhode Island which is the perfect jumping off point for a summer’s cruising on the East Coast of the USA, the asking price is only £275,000. She is an enormous amount of rat race escape capsule for the money.   Click here for her specification – Oyster 55’ Sovereign – OSTRIKA 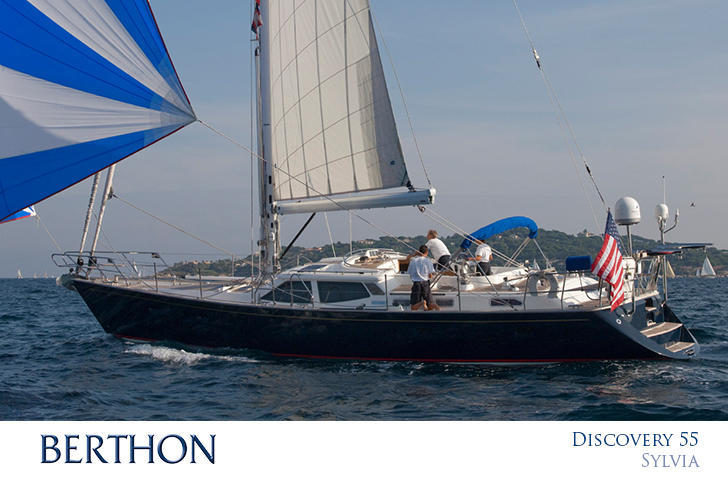 From 2008, she is #23 of this iconic sisterhood and launched in 2008.  The first Discovery 55’ to get wet was in 2000, and the class is still in production and still winning hearts and minds – and given the clever design details, sweet lines from Ron Holland and great build quality, we’re not surprised.

In her first ownership she did the Caribbean circuit and more, always with a skipper to keep her gleaming.  She has a maple interior that still looks new and Ken Freivokh’s influence can clearly be seen with the interior finishes, door and galley furniture and with the colours used. 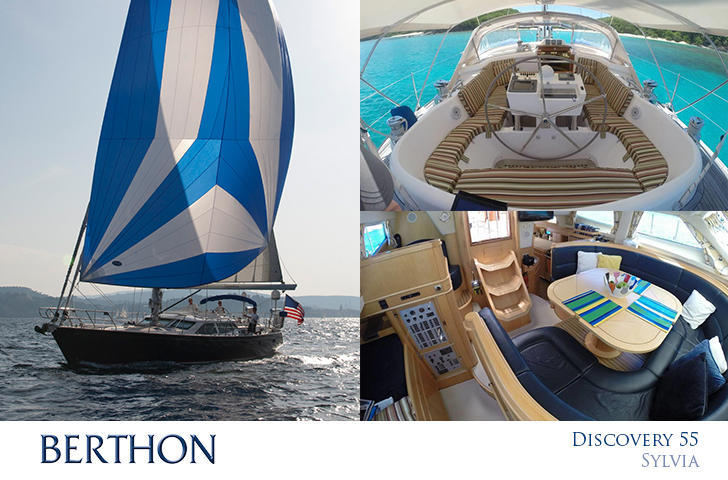 SYLVIA was possibly the most expensive 55’ ever to launch with her powered rig, upgraded entertainment system, cellar, great electronics, additional watertight bulkhead and more.

In this ownership she has also been skipper maintained, and used for just 6 months a year in the Caribbean.  In the summers she was put to bed on the East Coast of the USA.

The Discovery 55 is designed for a couple to circuit the planet aboard should they wish.  The owners’ cabin is large for a 55’ footer and the galley is fab which sports vast refrigeration and plenty of stowage for long distance cruising in remote areas… she has a proper sit down and see out deck-saloon and a chart table with great visibility for watch keeping in comfort out of the weather.  There are 2 guest cabins with separate head and shower and they have stacks of stowage so, if you do have guests aboard, the 3 day rule and fish thing need not apply.

Recently reduced in price to £615,000 + VAT, she is an epic blue water cruising yacht and you are invited to visit us at the Shipyard in Lymington to have a gander. Click here for the spec – [OFF MARKET]