News on Discovery Yachts – from Berthon and JE Marine 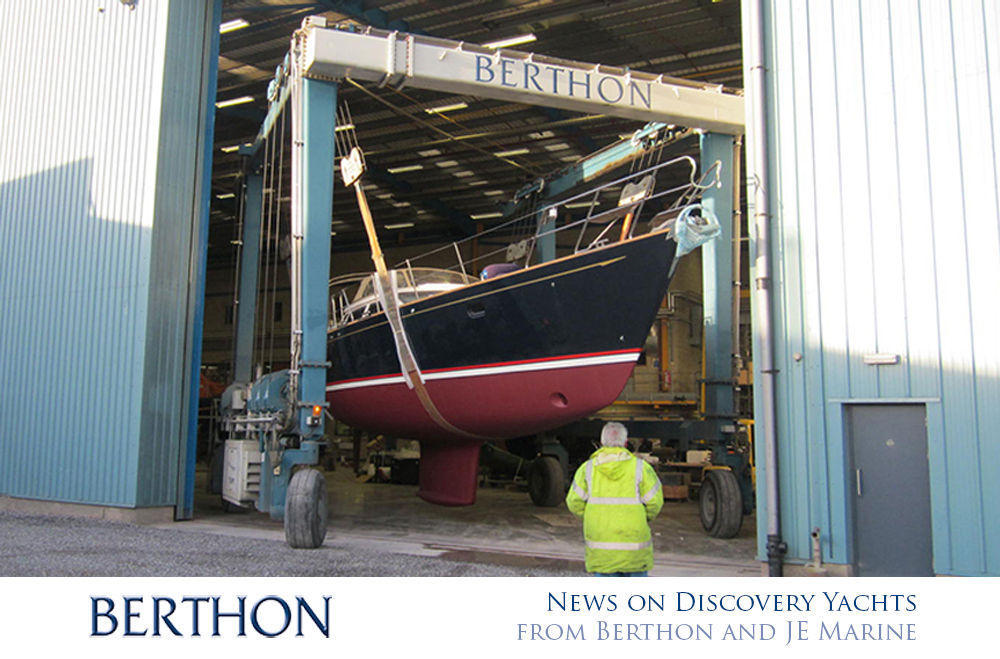 Here at Berthon we have been selling and refitting pre-owned Discovery yachts for over 10 years. Benchmark blue water cruisers, their owners sail them far, safely and in great comfort. The fleet continues to cross oceans and to munch miles.

During their lifetimes they need to be serviced, refitted and sold as well. We have intimate knowledge of the brand and are super enthusiastic about these special yachts. We continue to work closely with John Eustace of JE Marine, who is well known to all Discovery owners, as the go to man for the `Discovery Knowledge’.

John has had a busy 6 months supporting the Discovery fleet – 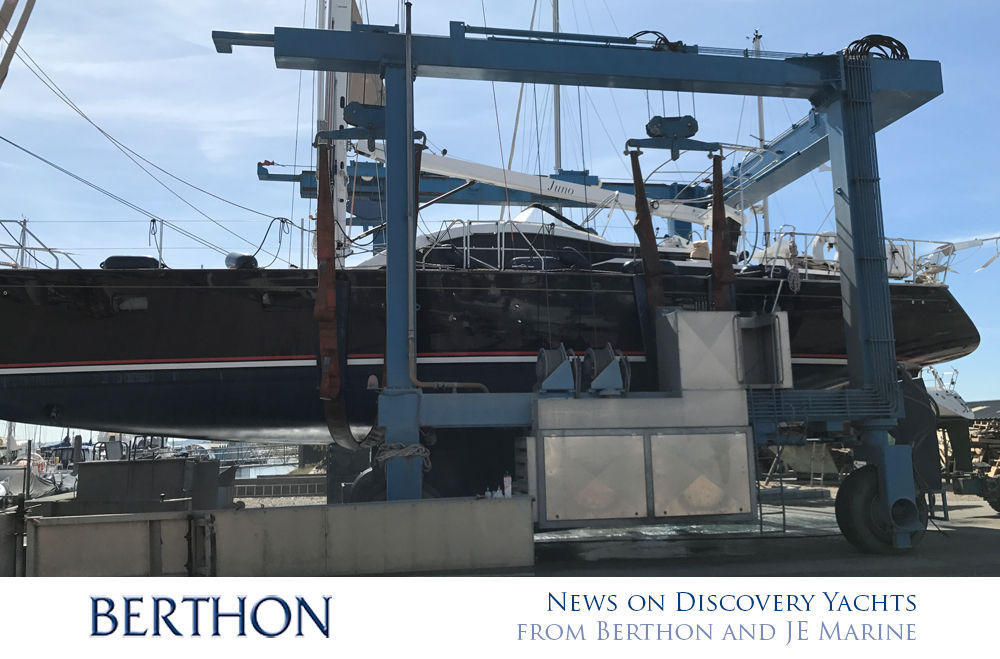 Starting with a planned Eastwards Transatlantic, Discovery 57/07 JUNO was prepped in the Bahamas followed by a short leg to Bermuda. The boat was then handed to PYD to bring her back to Lymington where she has currently been residing at Berthon Marina. This winter will involve a small refit carried out at Berthon with John’s input before heading to the Med for the summer of 2018. 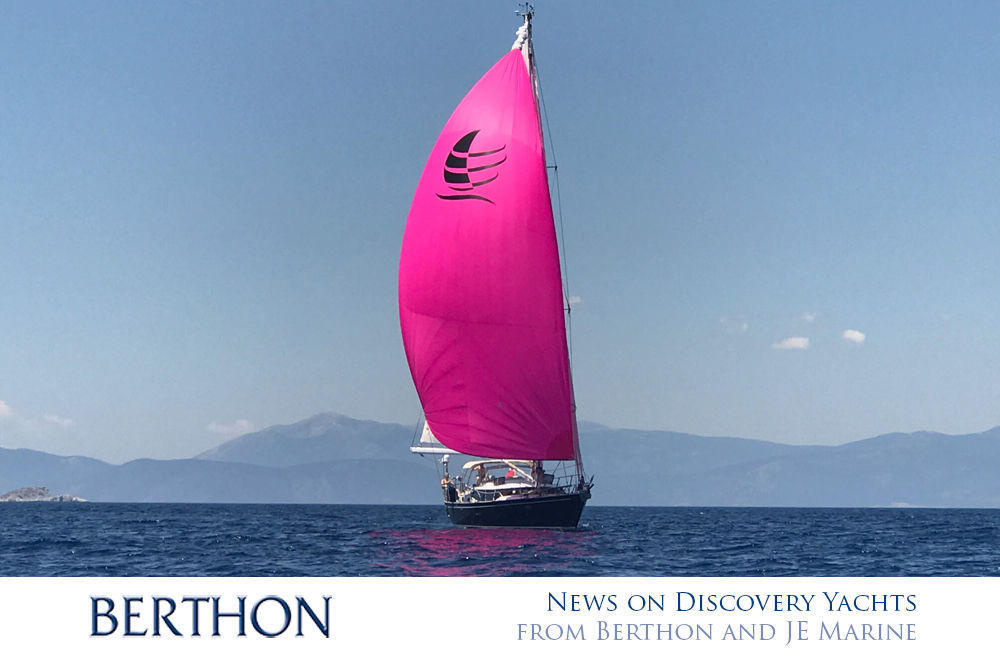 Other jobs for John have included maintenance work on 55-19 in Greece, preparing a 55 prior to Berthon completing brokerage exchange, launching 57-04 after a winter in Montenegro and included familiarisation training, assisting in the delivery of 55-046 from Palma to Athens, sail training in Mallorca on a 58, and moving the race yacht Caro from France to Palma and back, which is a yacht with which Berthon is also involved.

Most recently was the biggest challenge in getting a large amount of equipment such as pushpits and life rafts made and shipped out to Montenegro. Here the boat was worked on and then lifted out and winterisation completed ready for the 2018 season. 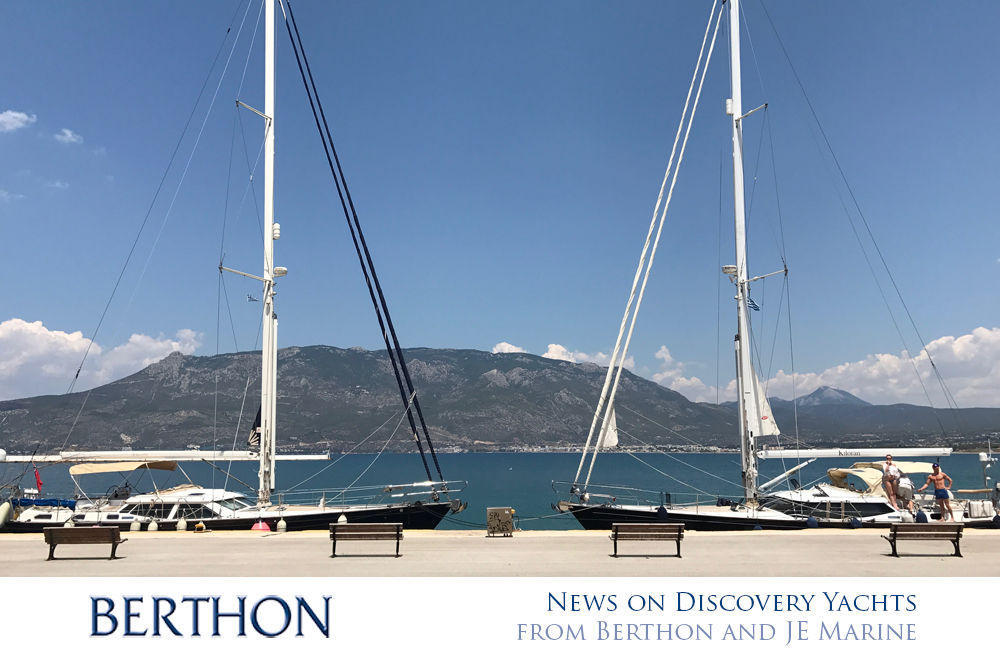 This year John and JE Marine have been the go to people for most Discovery owners in supplying spare parts for their yachts and requiring in depth knowledge. One example was an owner emailing on Sunday for a part and it being delivered in person on Wednesday in Palma.

Berthon and John agree that our clients need the best support, technical knowledge available and the correct parts quickly sourced and dispatched so that cruising hold ups are minimised.

John is still rushing with two more delivery trips to go this season for Discovery owners, one to Malta and one in preparation for the ARC from Gib to Las Palmas.

At Berthon we have been busy with brokerage Discovery sales. We have found new owners for – 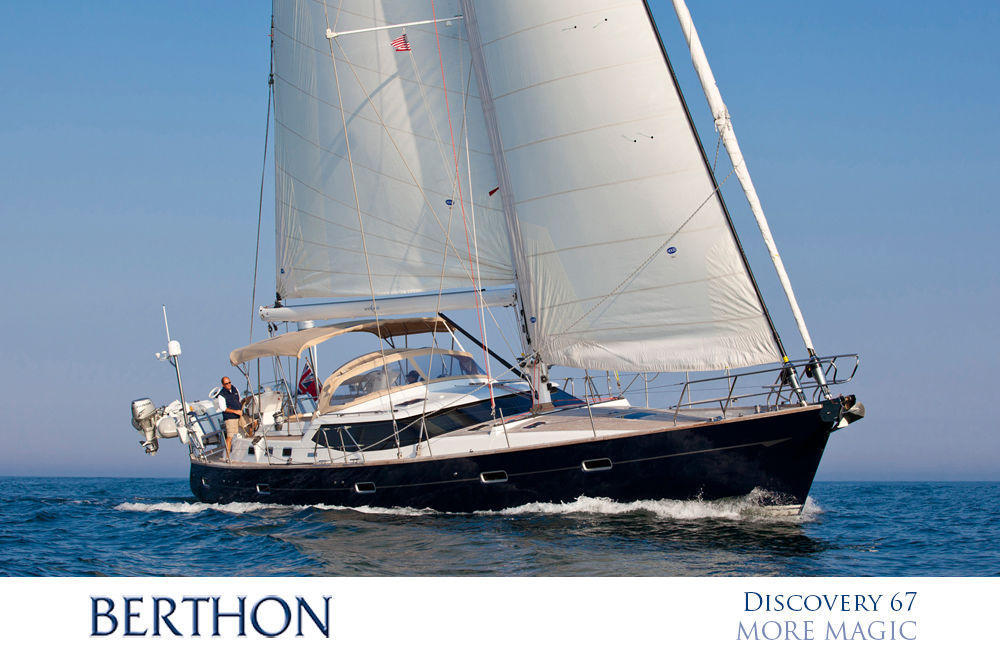 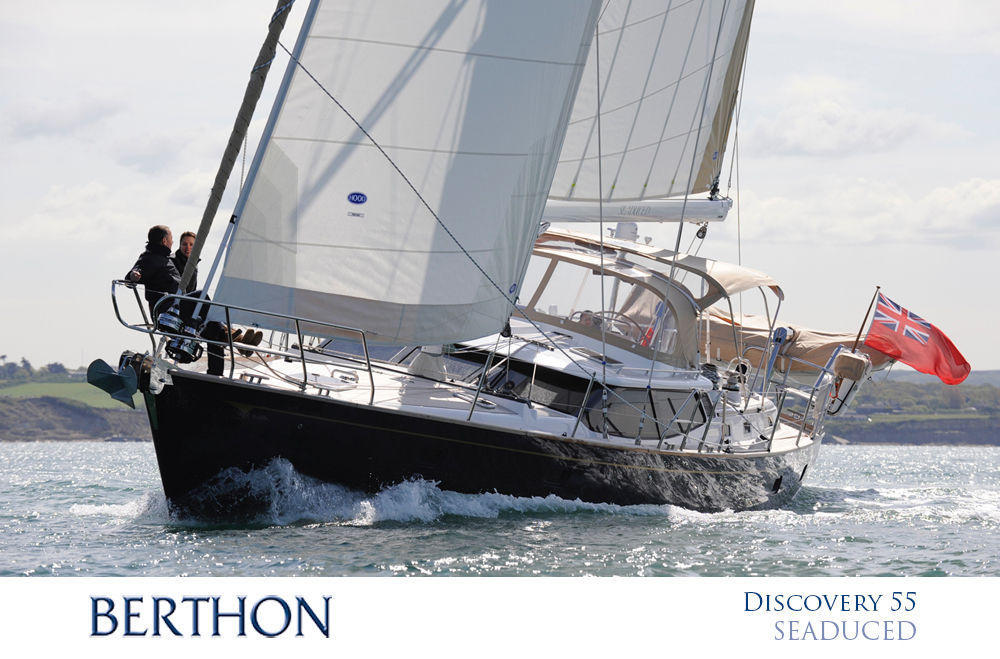 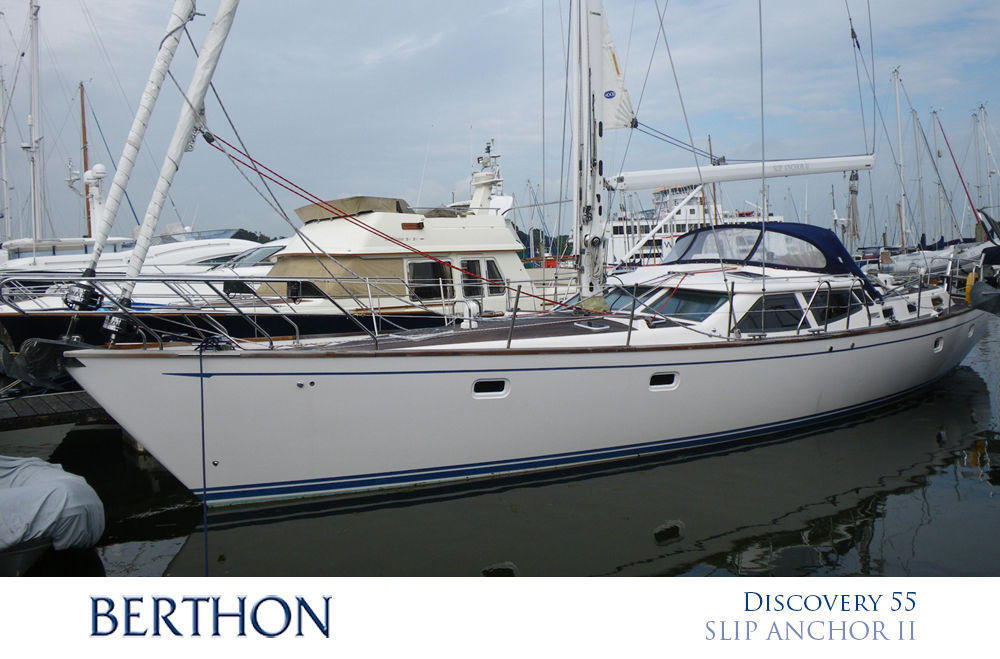 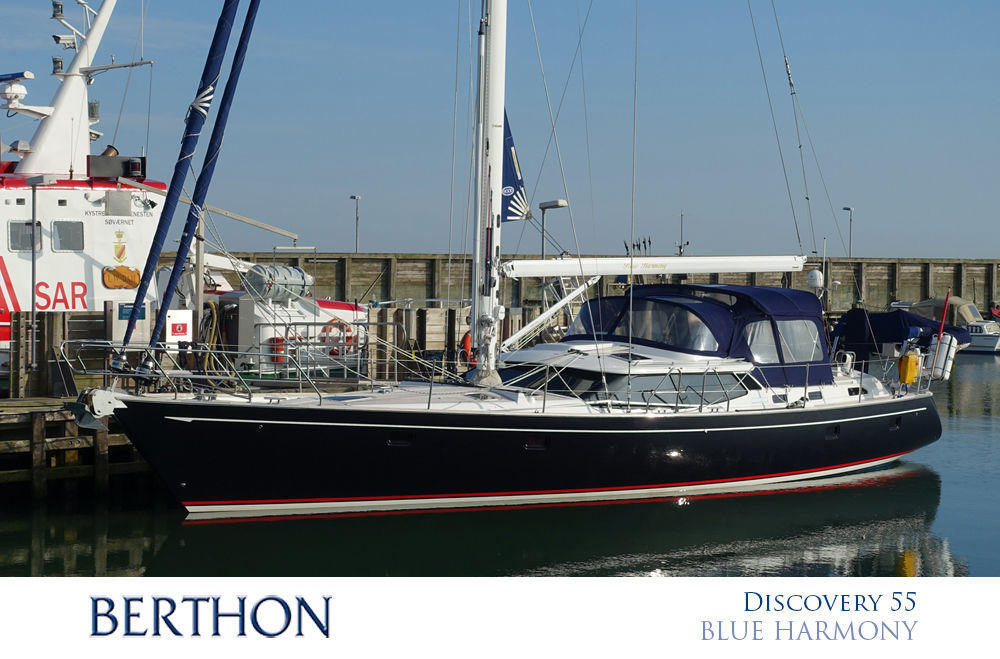 As ever, we are able to offer those members of the fleet who are looking for new adventurers. 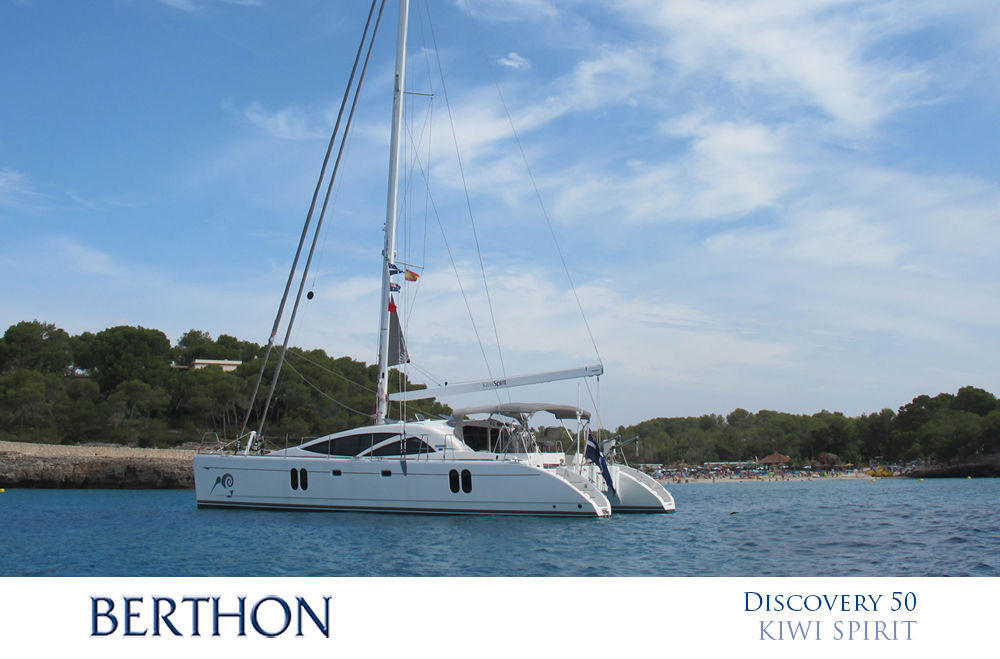 2010 from the doyens of yacht building in Marchwood, Bill Dixon provides the design magic. Long legged blue water yacht with a proven track record and one which unlike many of her kind, looks good from every angle. Prepared for a planet circuit which will sadly not now come to pass. 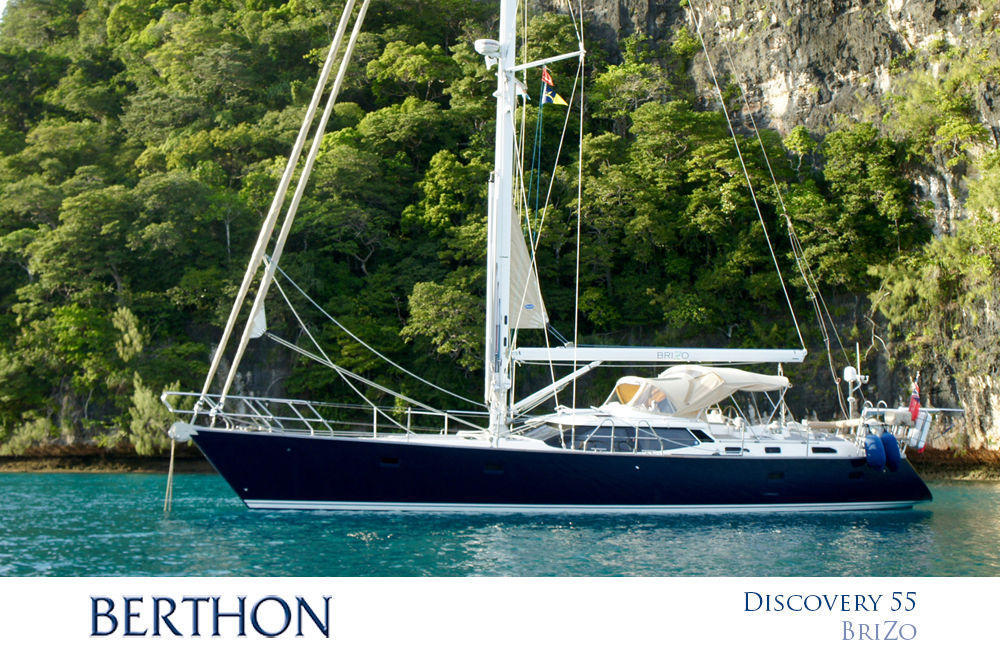 2011 blue water yacht from the Disco contingent. Spec’ed for serious mile munching for her current cruising duo, she is also full of nice touches like flush hatches and custom fittings downstairs. With new sails this year and gleaming from top to tail. 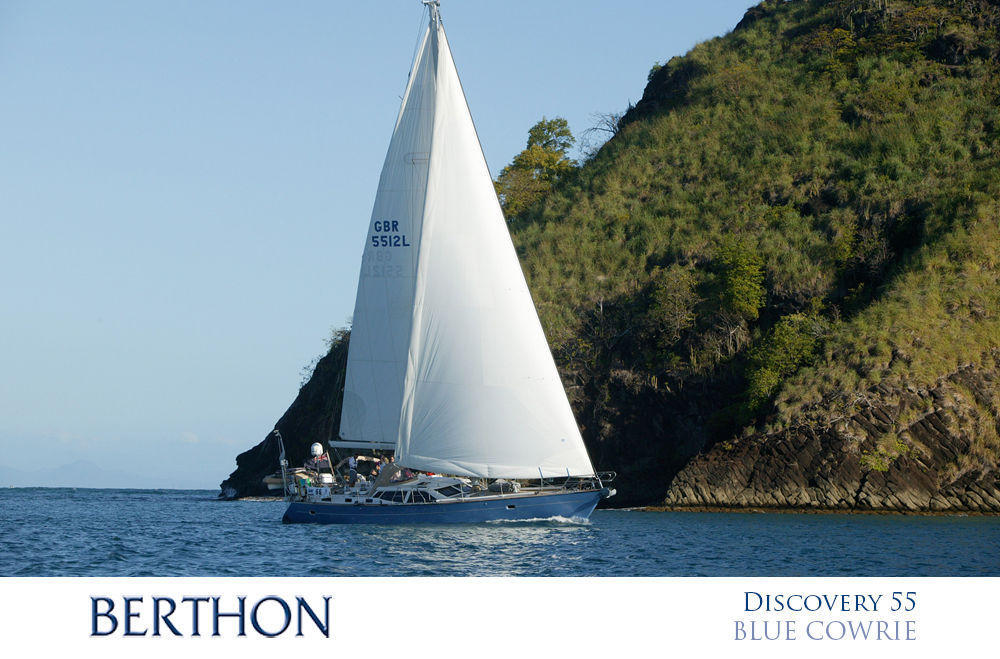 Handsome mid-blue Disco that we have known since the egg in 2006. She is with her original sailor. Holland and Freivokh’s magic aboard what is a benchmark blue water yacht, her owner is a talented architect so check out the myriad of unique and massively clever features that he specified. 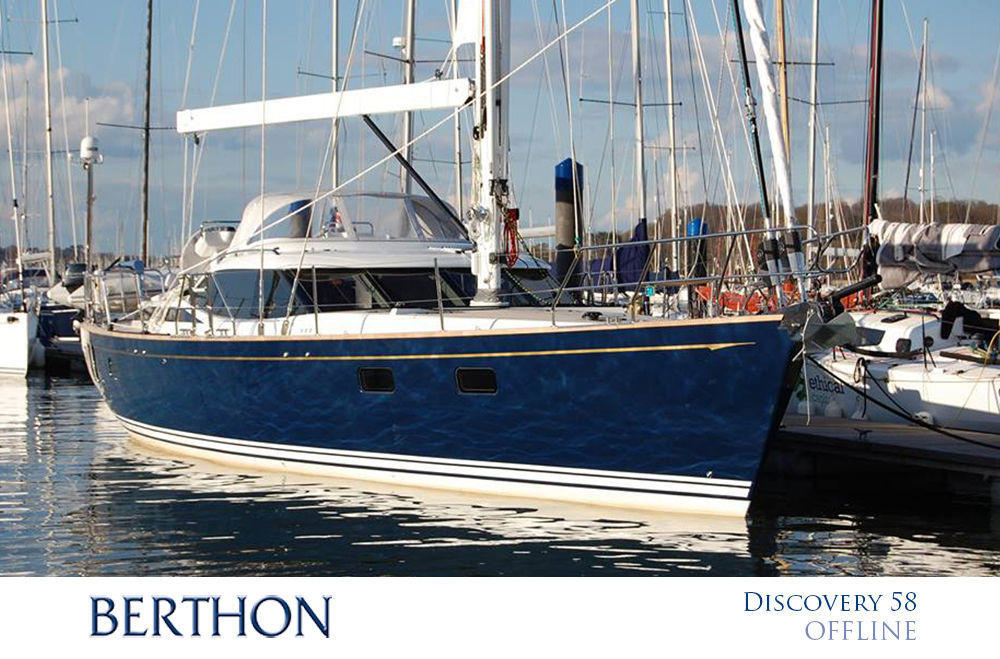 Ron Holland and the wizards in Marchwood in 2015, she comes with a splendid dark blue livery and a proper deck saloon for carpet slipper sailing. Her twin wheels and rapacious cockpit are however, rather more glamorous and she comes with masses of blue water kerfuffle to fit her for a planet circuit.

(13-03-19) Discovery 58 OFFLINE has been sold by Berthon. John Eustace of JE Marine worked with us and is a fount of knowledge when it comes to all things Discovery Yachts. Read on for pre-owned Discoverys that are offered by Berthon, at https://www.berthoninternational.com/berthon-blog/fair-winds-and-good-sailing-to-discovery-58-002-offline/.

Our big blue sheds, at Berthon, are a familiar location for the Discovery fleet and we have carried out pitstops big and small to many of the Discoverys on the on water today. 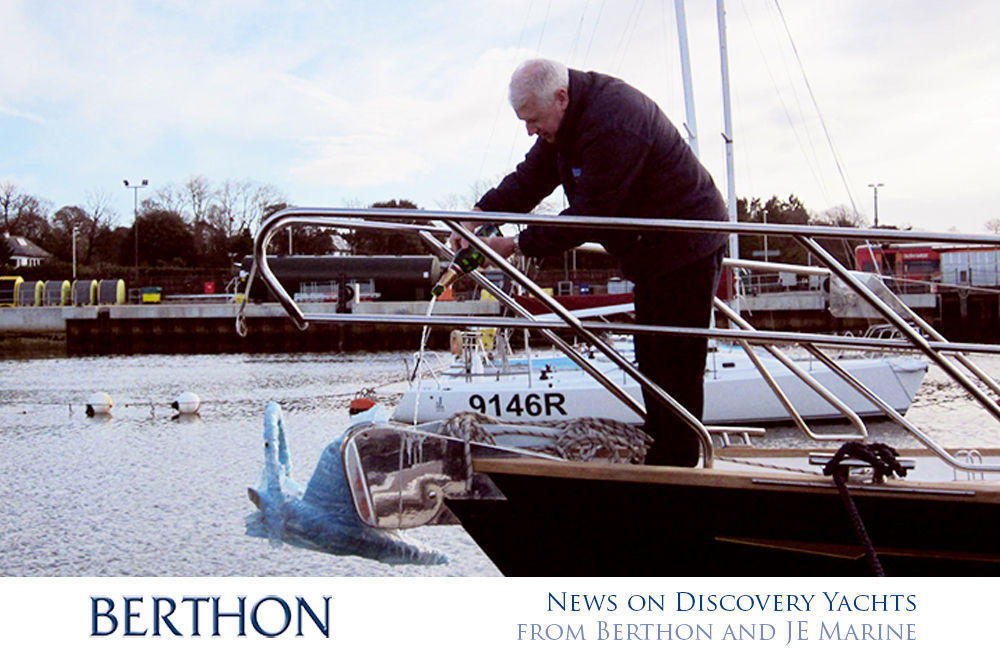 We wish Discovery 55 PAMELA well as she leaves for her world cruise on the ARC and World ARC this autumn. Fully refitted by Berthon she is gleaming.

Other recent occupants of the sheds include MORE MAGIC, for a spring pistop and systems upgrade, and very recently SLIP ANCHOR II for work to fit her for a winter cruising programme

John Eustace and Alan McIlroy from Berthon will look forward to seeing those Discovery owners who are participating in the ARC+ and ARC and will be there to assist with maintenance and preparation for the Rally. As ever we always love to hear about your future plans, whether they involve going far, a refit, ongoing service or selling and buying, you will find us super Discovery centric… Alan and John will be in touch with those owners participating this year to make a date for dinner, with you all, before wishing you bon-voyage.