Boréal is not afraid to forge its own path and these distinctive aluminium cruising yachts have gained a strong reputation over the past 15 years by proving their nautical capabilities and taking families all around the world to sunny or icy destinations from the English Channel to Antarctica! The Boréal 47, is a successful evolution of the Boréal 44 and over the last few years the 47 has fast become a very popular yacht with the yard in France now having a three year waiting list for new build.

Boreal 47 LUMINA, is now ready for a world voyage with the current owner at time of build carefully choosing the right equipment for such a trip. She has the added benefit of a shoal draught giving the option to dry out, from the doghouse there is great visibility while sitting at the navigation desk and likewise in the raised saloon. Not often for sale on the brokerage market LUMINA offers a new owner an as new boat throughout and an opportunity to set sail today.

LUMINA was my dream yacht when I commissioned her for delivery in April 2018, and she still is. There is nothing I would change. She sails well in a wide range of conditions and is incredibly robust and comfortable in a blow; you can do night watch from inside the doghouse and the next day dry her out on a beach or explore shallow anchorages that leave others scratching their heads. Aluminium construction and a swing keel means greater safety.

We cruised her to the Stockholm archipelago for a 3-month sabbatical with a family of 5 and would have continued our trip indefinitely had time and school allowed. The extensive and well considered storage really helps. She is also of a size that two can handle easily and without resorting to hydraulics and electrics that might fail. She has been equipped for a round the world voyage (including preparation for generator and electric winches would make retrofit easy) but has been far too lightly used thanks to COVID and life’s twists and turns. The latter mean that our circumnavigation is deferred as I have started a new business which requires a lot of time and attention that I can no longer devote to LUMINA. I would, however, happily buy her back at a later date, as we will greatly miss her. 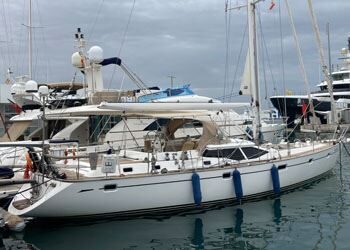 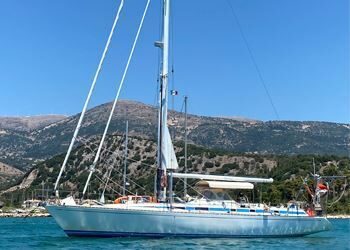