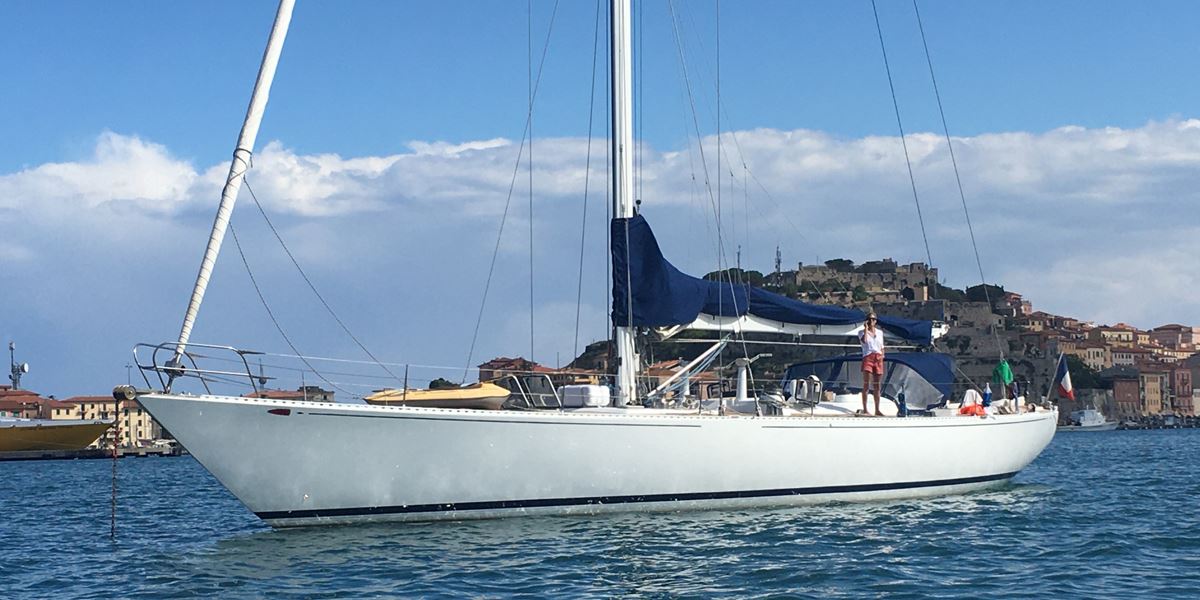 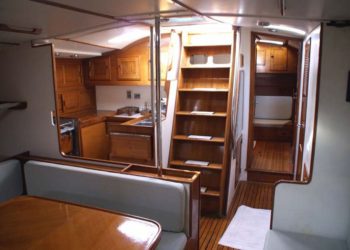 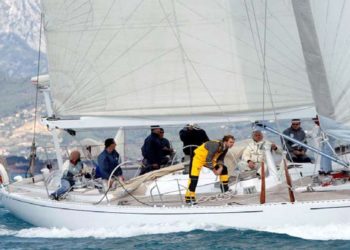 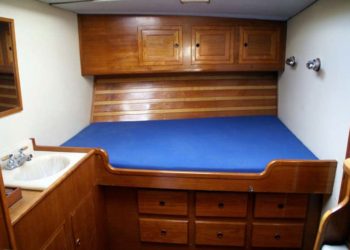 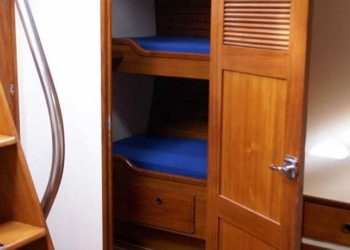 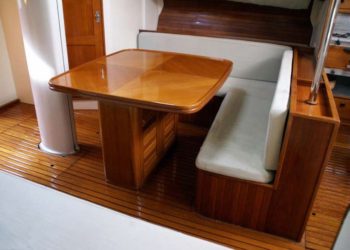 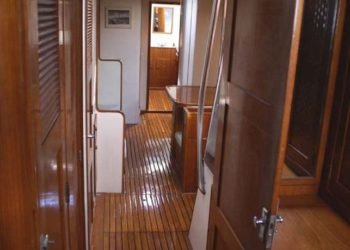 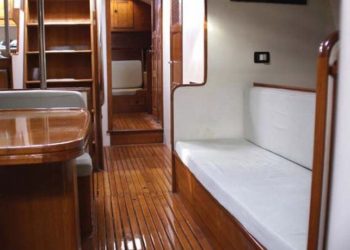 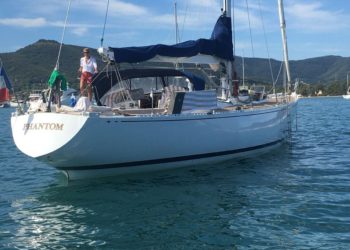 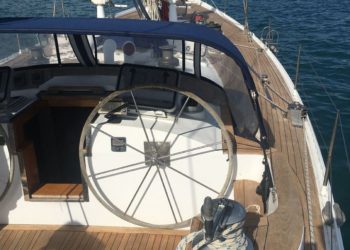 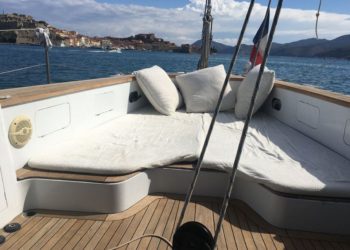 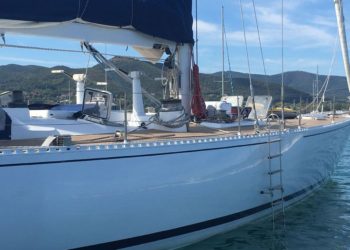 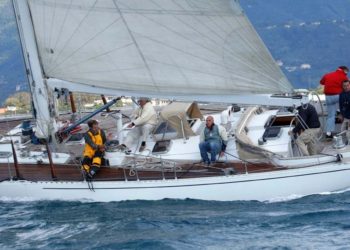 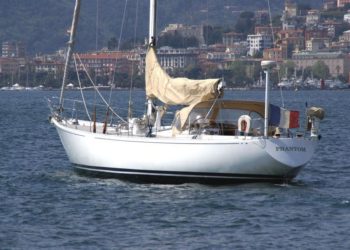 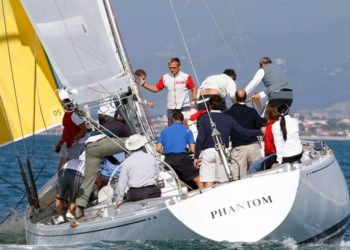 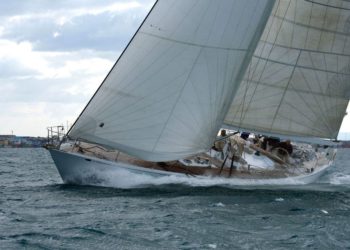 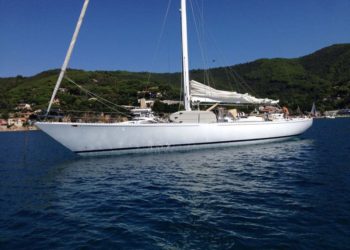 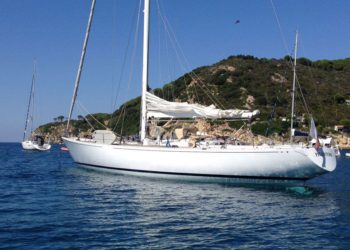 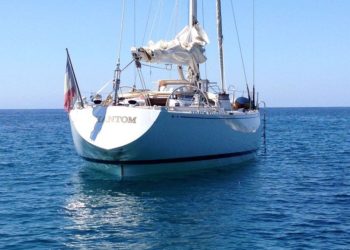 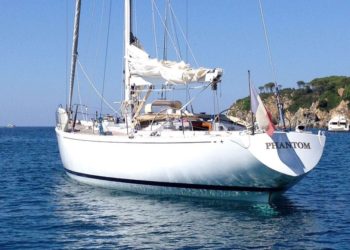 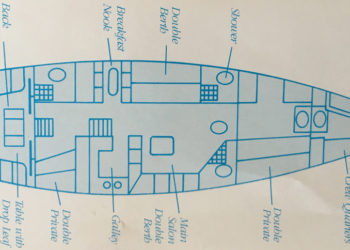 PHANTOM is an ocean sloop built by the Canadian shipyard Cuthbertson & Cassian in 1973. Established in 1969 by two designers, George Cuthbertson and George Cassian, the yard was distinguished by a series of design and construction techniques, many of which were innovative at the time of the company’s formation. PHANTOM was built using a balsa and fibreglass sandwich construction, although commonplace now, this was cutting edge technology at the time, and she was very carefully built. This method allowed the builder to decrease weight and increase the rigidity. Some previous examples, such as HELISARA (by Herbert Von Karajan) and GRAMPUS (by Angelo Rizzoli), were already famous for good results using the same technique.

She was the first example of a custom-made product from Cuthbertson & Cassian. Production had previously stopped at 61 feet, so measuring in at 66 feet, PHANTOM’s length was considered unusual at the time of her build and indeed the flagship of the yard.

She had some bold design choices: twin wheels, rails for adjusting forestay, four winches for simultaneous trimming of genoa and spinnaker, masthead rig with very high aspect sail plan and shaft position moved far forward, which was the direction yacht design has moved toward in the preceding decades to the yachts we have today.

Unusually for yachts of this era, and due to the deck layout aft, she has a large and sociable cockpit, which is uncluttered and offers an excellent blank canvas for options of seating and entertainment for cruising and an efficient workplace for racing.

A modest refit to optimize the deck layout with modern sail handling systems would make her really quite spectacular.

The yacht changed hands in the 1980’s and the boat participated in the races on the East Coast, Miami, Florida and the Caribbean, gaining top positions in the ’84 editions, ’85 and ’86 of Key West race week.

PHANTOM was then bought by French ship owners in the ’90s in the Mediterranean and based in St. Tropez. Her current owner bought her in 1996 and, between 2004 and 2006, the Cantiere del Carlo shipyard of Viareggio carried out the complete restoration of her interior and deck, in order to make her the most livable boat for cruising and easier to sail with a small crew. She has a much cleaner deck layout and the primary winches are now powered making maneuvering much simpler.

In recent times, she has taken part in Mediterranean Regattas, racing on the water with her contemporary Maxis, BENBOW, HELISARA and GRAMPUS. She has taken part in ten races on the Upper Tyrrhenian Sea and some Viareggio-Bastia-Livorno regattas, where she is frequently recognized for great performance and managing to stand up to the most modern yachts she competes against.

PHANTOM really is something special. She is a fast and safe cruising yacht, with a large amount of provenance, recently completely restored and ready to sail again to the next owner who will benefit enormously from the current owner’s not inconsiderable expenditure on her. A ground-breaking yacht at the time, she still gives the edge over her contemporaries and will be the envy of many on the classic yacht circuit. 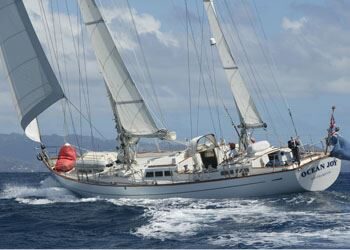 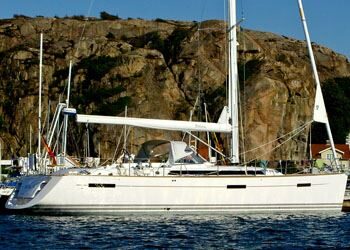