MERRYN was specified and built for her current owner who is a most experienced yachtsman. She has been specified for fast, blue water cruising. It was important that she could be handled shorthanded and that the detailing of all the systems and cosmetics were to a high standard. The owner visited the yacht during build to ensure that his Brief was delivered. MERRYN has been a reliable and robust yacht in his ownership, delivering fast passage times in a manner that was comfortable for her crew. She has always been meticulously maintained and is only now being offered for sale as her owner’s cruising programme is complete. The combination of Judel/Vrolijk design and Italian yacht building make her an attractive package.

The owner employed the well-known surveyor Bill Dunlop of Marintech to oversee the build of MERRYN and he visited the yacht on 2 occasions during build and was involved in the build process. 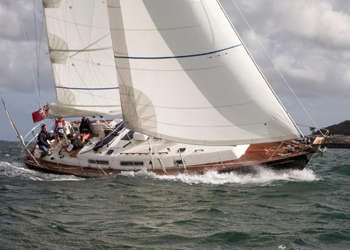