The Hallberg-Rassy 54 was introduced in 2006. A total of 44 yachts were built between 2006–2012. The HR-54 is a more modern looking yacht compared to its precursor, the successful Hallberg-Rassy 53. The HR-54 offers graceful lines, a foldable swimming platform – providing easy access and a huge space, a sun deck at the aft cabin coach roof (free of winches and other deck gear) and an easily accessible & very comfortable cockpit with improved angling of the back rests and flush mounted teak. In addition, the interior includes new design features such as the entrance stair, two sofas, the modern colour combinations and the floor is in one level throughout the yacht. Hydraulic sail handling and electric winches makes sailing possible by one person or a couple. The oversized engine (180 hp) together with an efficient bow thruster makes harbour manoeuvrings safe.

Hallberg-Rassy 54 POPSY is an exceptional yacht. It is one of the most well taken care of yachts that I have seen. POPSY was built in 2008 but was delivered in 2013 to its first owner, who used the yacht lightly in the Scandinavian waters during summer time. When the current owners bought POPSY in 2017, she was almost in condition as new but missed some of the equipment that the current owner wanted to make POPSY into his standard.

Systems such as the engine, generator, seacocks, rigging and the hydraulic system had a full check/service. Since the autumn of 2017, POPSY has been cruised in the eastern Mediterranean for about 3-4 month per year. During time of no use, she has been fully covered and has been under an excellent professional maintenance schedule. In 2019, POPSY was updated with solar panels and a new generator and was sailed to Holland, where it is currently located in a heated show room.

The general condition of POPSY reminds me more of a demo yacht than a yacht that has been used. The equipment list is superb. POPSY is equipped for and ready to do any type of sailing. 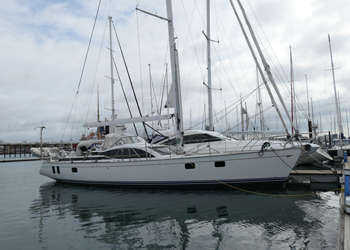