Designed by Andre Hoek to be a voluminous yacht with wide beam, medium displacement and moderate draft. She offers a spacious interior with upper and lower saloons, large galley, good engine room, owner cabin, two double guest cabins and very good crew accommodation forward for four with dinette. The cockpit area is well protected by the imposing deckhouse. She is rigged as a cutter with a fairly tall mast and 410 m2 of sail area – she sails well.
The yacht was nominated for the 1998 International Superyacht Design Award.

As Aeolian she was enjoyed as a private yacht and did charter. Under this ownership, in 2007/8, the yacht had a very substantial refit, carried out in Camden, Maine. This included major upgrades like new teak decks, new salon windows, fresh paint on hull, superstructure, mast and boom; new main engine, generators and more. In excess of 1.5 million euros was spent.

Sold on in 2011 she was renamed WHIRLWIND and was enjoyed as a private vessel. Her registry was changed to Isle of Man and Pleasure Yacht. She cruised the Mediterranean, Caribbean and USA. In 2016 she returned to Europe and in 2017 finalised her EU importation with tax paid status gained in Malta. In March 2017 she was sold to her current owner who retained the name but changed her to French flag. Since then the yacht has been based in the south of France and seen light cruising use. The owner had been a serial motor yacht owner, and this was his first foray into sailing. He was smitten by her looks and classic style. However, whilst he enjoyed the experience enormously sailing it seems is not for his family.

WHIRLWIND’s looks are wonderful, and she is a serious ocean-going yacht. She is an ideal family cruising yacht that could work very well on the charter market because of her three equal sized cabins and good crew area. 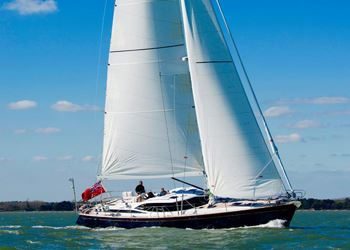