ZOE is an excellent example of a well-maintained and updated S&S Swan. The following is a partial list of improvements that have been completed during the past 3 years.

Nearly five years ago, my wife and I began looking for a cruising boat that would allow the two of us to take extended voyages. We preferred older boats that we could restore as we sailed. High on our list were sailing performance, styling, and ability to sail short-handed. Most cruise boats met the latter criterion, but in our minds the “load carriers” came up short in sailing performance and styling.

We opted for our Swan 411 and chose it over a Swan 41 because it carries more sail area. Our intended sailing destinations included the Puget Sound and South Pacific. Both areas tend to have less wind than more, so we wanted to carry as much sail as we could. There are very few 411s around, but I eventually found one in Rhode Island. It needed a lot of TLC, but it was exactly what we wanted.

We had our Swan, ZOE, trucked across America and began a restoration and sailing journey. Because we intended to go off shore for extended periods, we wanted the engine, sails, and rigging to be top notch. ZOE already had a late model Volvo engine, but her sails and rigging were tired. We chose custom off-shore sails by a premier West Coast sail loft. Because micro cracks were starting to appear in ZOE’s standing rigging, we took no chances and replaced all of the standing rigging with new solid rod.

As shown in the inventory, our updates were extensive, but we have the boat we want. It sails like a dream, and I have sailed solo quite a lot. I’m nearly 72 years old, so that says more about the boat than the sailor! Unfortunately, life has intervened in our cruising plans, so we now offer ZOE to a new generation of sailors. 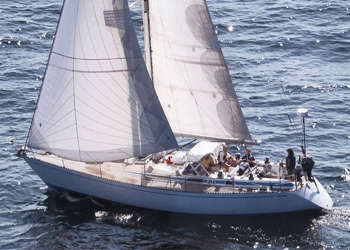