The best Nautor Swan 44 there is! There is not much on her that has not been upgraded or changed in the last 5 years. As her owner mentions below she has been in his ownership for 28 years and has been very well loved. She has been mainly used for cruising in the UK and Med. In recent years, she has been summer cruised in the Med and kept ashore in Sicily for the winter months. She has proved herself as a comfortable yacht to be on board for weeks at a time no matter what the climate is!

In September 2019, she was sailed back to the UK from the Med to come onto brokerage. She was sailed back by a delivery crew, which is a great way for a broker for a yacht to arrive as it gives us a good indication of what works and what really does not. The crew that sailed her back could not stop talking about how fantastic she was and how well she had looked after them – especially in Biscay in September. It is great to hear what a yacht is like from someone other than the owner and especially those who have sailed many yachts.

She underwent a major refit at Hamble Yacht Services on the River Hamble in 2015. The list of works that was a carried out was rather a long one and you will see full details on the specification of the main big items, which were completed. Some of the key items that were carried out are engine, rig, nav. gear, hull paint and super cool fuel cell but the list is extensive. All invoices are available to any potential purchaser to view. Since her refit she has completed in the Swan Cup in 2016 and as mentioned she has been cruising the Med with her proud owner. It is now time for a new owner to take her over and continue to enjoy her wonderful updates, gorgeous looks and fabulous heritage.

We have owned ROSY PELICAN since 1992 (27 years!). She has been all over the world with us – including an ARC. She has been a wonderful cruising yacht and competitive in Swan events (fastest 44, 7th in class, in 2016 Swan Cup at Porto Cervo). 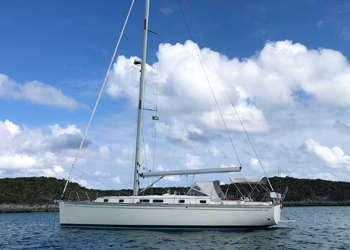