The now famous Fairey Marine range of offshore cruisers, the 23 Huntress, 28 Huntsman and 31 Huntsman, were so dominant in the big offshore races of their day that they became legends in their own lifetimes. Offering exceptional sea keeping with a rare ability to maintain speed through heavy weather and confused seas won international success and acclaim within the racing, and cruising fraternities. Now, a full 50 years on, they remain some of the most capable, and beautiful boats to ever grace the water.

When Fairey Marine closed, the two moulds for the Spearfish ended up on the Isle of Wight. Although one was stolen – and never since come to light, the survivors were bought along with the marketing rights to produce and sell them as the Fairey Spearfish (Mark. III if you are being picky).

The new Swordsman 30 was moulded by the Bewes Brothers as Swordsman Marine, using this original hull mould tooling, with an all-new superstructure to improve on the more Spartan levels of headroom, volume and aft cockpit layout of the original. As such, these craft share the same Alan V Burnard lines and effortless abilities at sea of their forebears, and have proved worthy successors to, and bearers of, the Fairey marque.

This 2006/7 example is hull 30/006 and is immaculately presented by very diligent and experienced owners, who have thoroughly enjoyed their time with her, and find the application of polish very therapeutic – as you will see the second you step on board her. She glistens from truck to toe and is very spoilt. Her sweet lines hide the powerful Yanmar 440HP six-cylinder diesel, which lies in the superbly accessible central engine bay (with a simple ram-assisted teak-laid hatch for inspection). Fuel is fed via a pair of switchable Racor fuel filters, and tank use is selectable via a simple manifold system, mounted to starboard of the main block. The Yanmar is twinned to a Hamilton HJ274 water jet, effecting uncomplicated and precision control over her handling in port, and enabling unrestricted access to shallower cruising grounds, along with the peace of mind of knowing that there is no protruding stern gear to damage or tangle should that lobster pot not quite get out of the way.

Naturally, with a centrally placed engine there is excellent access, locker space and seating potential around her capacious open cockpit (which can be fully enclosed with either an easily fitted and snug tonneau cover, or a smart canvas camper canopy, featuring large perspexes). With two adjustable helm seats, a horseshoe aft seat, and good lockers, the removable central teak table (stored perfectly in a padded bag, with bubble-wrap around the leg.) sets off this super-usable space. In keeping with her Fairey heritage, her cabin is beautifully finished in satin-varnished teak, with solid build, elevated finish and a reassuringly Corinthian feel to her. Her forward vee-sofa easily drops to a comfortable occasional double, with good lined curtains the keep the morning light at bay, and a small galley will look after your hunger and thirst, with a compact but bijou heads offering head, and basin and shower. A neat athwartships double berth, screened off by a bulkhead and curtain, runs across her beam beneath the forward cockpit – so she is a true 2+2. Much imitated, but never bettered – ECLIPSE is an absolute peach! 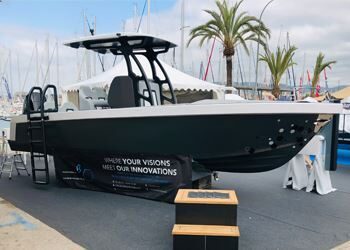