The Windy 37 Shamal was developed by Windy Boats in co-operation with Espen Øino, the renowned superyacht designer and naval architect. The 37 was the start of a new design language from the builder, which took inspiration from the brands Scandinavian routes.

MAKING WAVES was supplied by Berthon in 2020. She has been comprehensively maintained by Berthon Spain, kept under full guardiennage care and has been stored ashore under cover each winter. She was hull 6 and delivered towards the end of the 2020 summer season.

Her comprehensive mediterranean specification includes the largest Volvo Penta D6-440 diesel engines, which boast a top speed performance of approximately 46kts, depending on conditions. The engines are fitted with the latest DPI outdrives and enhanced with the Joystick docking system. The boat is also fitted with the power trim assistance feature for the outdrives, which automatically controls the drive position when underway. The responsive Humphree interceptor system, actively manages the trim of the boat.

The Fusion Apollo MS-RA770 stereo comes with Bluetooth and DAB functionality, plus 4x speakers in the cockpit and 1x panel stereo in the cabin. The cockpit lighting has been upgraded, together with the wet bar equipment.

The large social cockpit, features a sizeable aft sun pad with moveable back rest. There is also a clever canopy system, with bars that easily fold up into position and can be used as a bimini or enclosing camper canopy. The boat is also sold with a harbour cover, new windscreen cover and instrument cover. 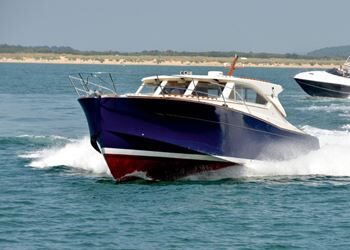