Berthon Spain are delighted to represent the Windy SR52 Blackbird – GOSTA for sale in Port Adriano, Mallorca. This exceptional example has benefited from a notable refit between October 2021 and June 2022 in addition to full time care from her professional crew.

The yacht offers a notably upgraded specification, which even includes enhancements to the hull form and bow design, which were implemented during original production by Windy during original build.

The Windy SR52 Blackbird is a hugely capable, sleek, robust and fun chase boat. With her three IPS 600 engines, she boasts a top speed of about 45kts depending on conditions, and over 600nm range at a cruising speed of 30kts. She is easily managed shorthanded thanks to the Joystick docking system and the Dynamic positioning system, which automatically hold the yachts position and heading.

The quality from Windy is exceptional, with custom lacquered hull and top sides, and everywhere the typical Scandinavian attention to detail. She combines the renowned design flair from Dubois with the superb build-quality, production capability and performance of the Windy brand.

The refit took place in La Rochelle, where the three IPS 600 engines were removed from the engine room, fully serviced and re-painted at the Volvo workshop, with the alternators and starter motors serviced. The IPS units were removed and fully serviced with clutches replaced. Whilst the engines were out the entire engine room was carefully repainted.

The topsides and hull have been meticulously repainted in Awlgrip Extreme black, together with the yachts accessories, such as the swimming ladder, FLIR camera, VHF Antenna and Radar for maximum aesthetic appeal. The Nextel dashboard was also refinished.

The triple Volvo glass cockpit screens were replaced and an additional Garmin screen was mounted in the cabin. New cameras were fitted in the engine room and above the sun pad as well as a new wind transducer and DPS antenna for the digital anchor.

The sound system was renewed with all speakers replaced, the sub-woofer tested and a replacement amplifier fitted. The entire refrigeration system for the deck fridges was changed, including raw water pumps, compressors and evaporators.

GOSTA is commercially registered and VAT paid. This exceptional example will impress on any inspection and viewing is highly recommended. 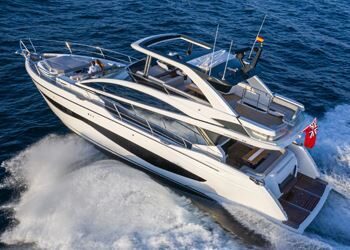