It may have the word ‘National’ in its name, but it isn’t a state-funded establishment, nor is it located in one of our principal cities where most of our national museums reside. The National Motor Museum at Beaulieu was founded by my father, Edward, 3rd Baron Montagu of Beaulieu, as a tribute to his own father, a pioneer of British motoring. As one of the first stately home owners to open his house to the p ublic, my father was also a pioneer. But this stately home had an added ingredient: a small collection of veteran cars in the front hall. This generated great interest and the museum was soon moved to larger buildings in the grounds. Later, in a further expansion, the museum and its libraries became a charity. That was in 1972, since when another 50 years of motoring history have been clocked up. 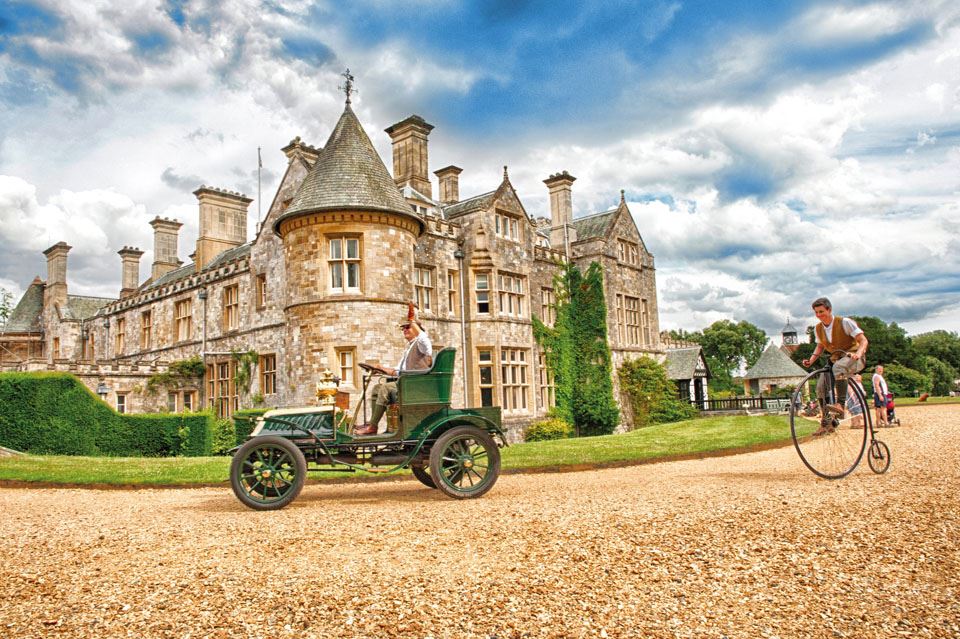 PALACE HOUSE, MY FAMILY HOME. WE WELCOME VISITORS HERE AND TO THE NATIONAL MOTOR MUSEUM EVERY DAY EXCEPT CHRISTMAS DAY.

The National Motor Museum Trust’s mission is to tell the ongoing story of motoring on the roads of Great Britain. It does this not just through our collection of 275 vehicles, but also through our extensive libraries and archives. These are housed in a dedicated Collections Centre which contains an astonishing 1.7 million objects, including 300,000 reference books and 1.4 million images, making it the most significant motoring collection in the UK. 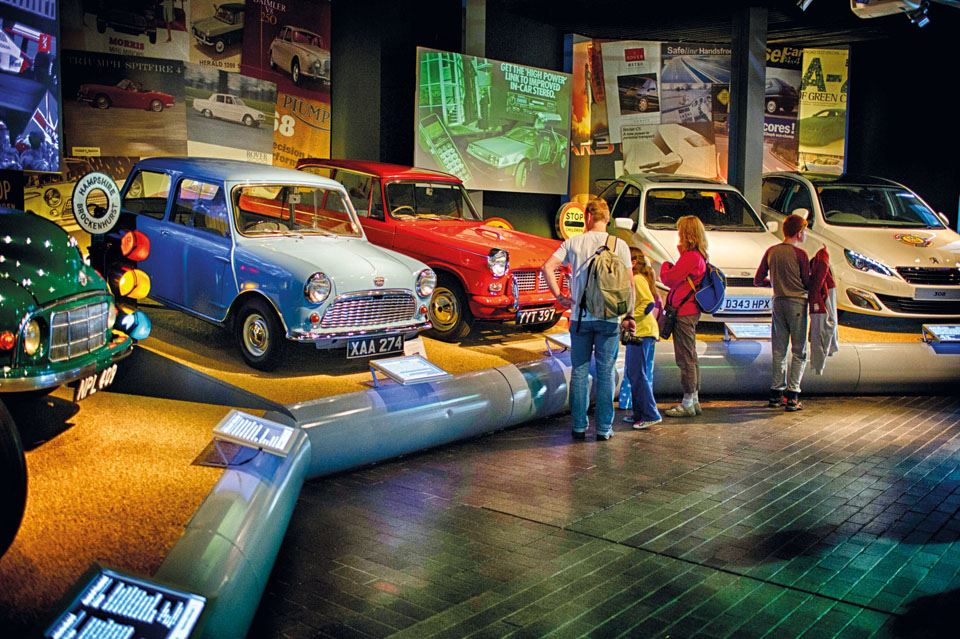 In the museum itself, the vehicles on display include family cars, motorcycles, sports cars, racing cars and commercial vehicles from every era. The star exhibits include my grandfather’s 1899 Daimler, which he drove in the Thousand Mile Trial of 1900. He was awarded a bronze medal, one of only 35 of the original 65 entrants to finish. 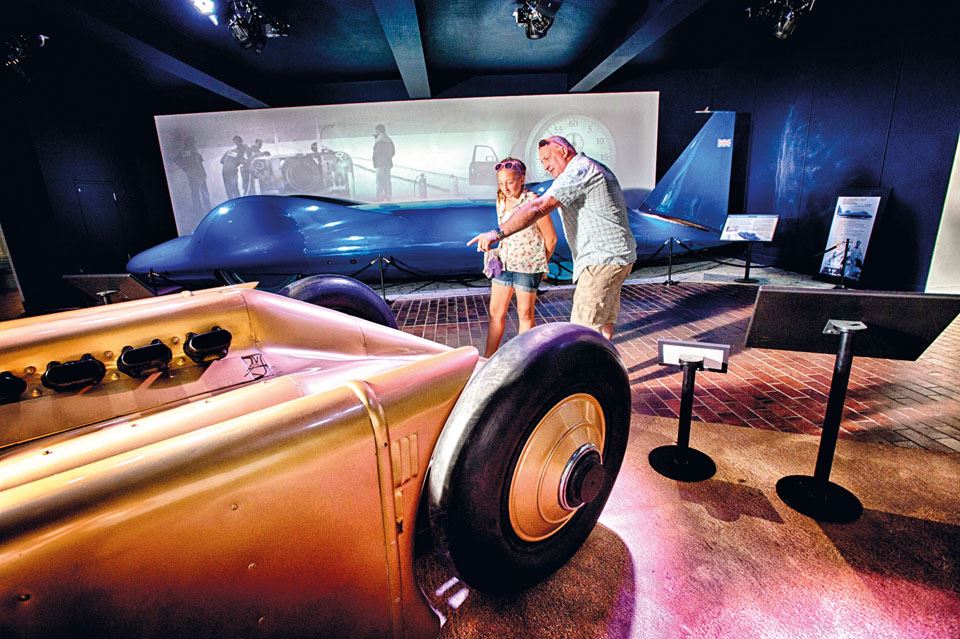 A passionate campaigner for the cause of the motorist, he drove this car into the House of Commons Yard, becoming the first person to do so, and gave the Prince of Wales, later King Edward VII, one of his first ever rides in a motor car. This was important, since Royal recognition of this new-fangled means of transport helped to make the motor car respectable.

Another treasured vehicle is the 1903 De Dion Bouton, which, as the only car to be part of the estate my father inherited, was really the start of his collection. It has been at Beaulieu since 1913, when it was acquired from a tenant, after which it became the works vehicle for the estate electrician! My father first drove it on the annual London to Brighton run in 1950, an event which the museum has entered almost every year since. Driving our De Dion from London to Brighton has become something of a rite of passage for Montagu family members after they pass their driving test! 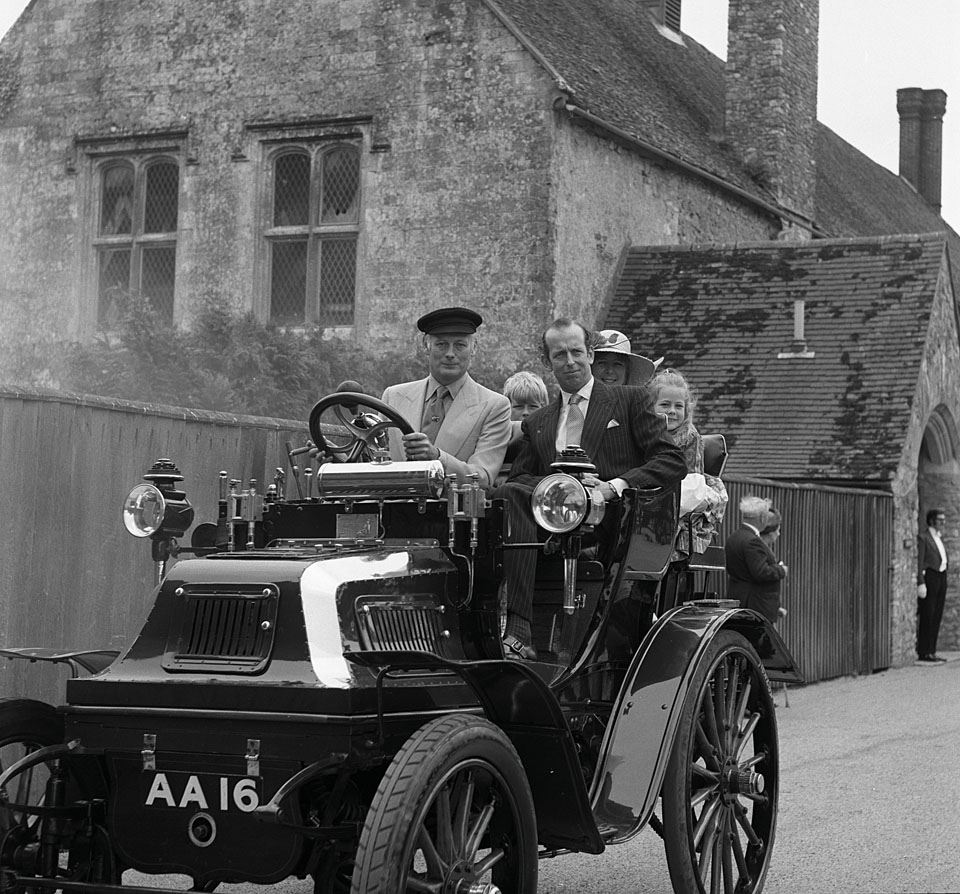 MY FATHER, EDWARD, LORD MONTAGU, IN THE 1899 DAIMLER WITH HRH THE DUKE OF KENT IN 1972. I AM IN THE BACK WITH MY MOTHER AND SISTER MARY.

Grander than either of these cars is the 1909 Rolls Royce Silver Ghost which was rebuilt from the chassis up after my father purchased her in 1954 from a garage which was using her as a breakdown truck. In her restored form, this car has appeared in more publicity images, calendars, greetings cards and jigsaws than any other! Incidentally, the Rolls Royce mascot, the Spirit of Ecstasy, was commissioned by Rolls Royce on the advice of my grandfather who recommended the sculptor, Charles Sykes, to them.

We are also very proud of our land speed record-breakers, notably the 1000hp Sunbeam, one of the first purpose-built Land Speed Record cars and the first to reach 200mph, driven by Major Henry Segrave. Another is the splendidly streamlined 1929 Golden Arrow which in 1929 set a new record of 231mph, and the CN-7 Bluebird. Driven by Donald Campbell, it set another world record in 1964: 403mph, the last wheel-driven car to do so. 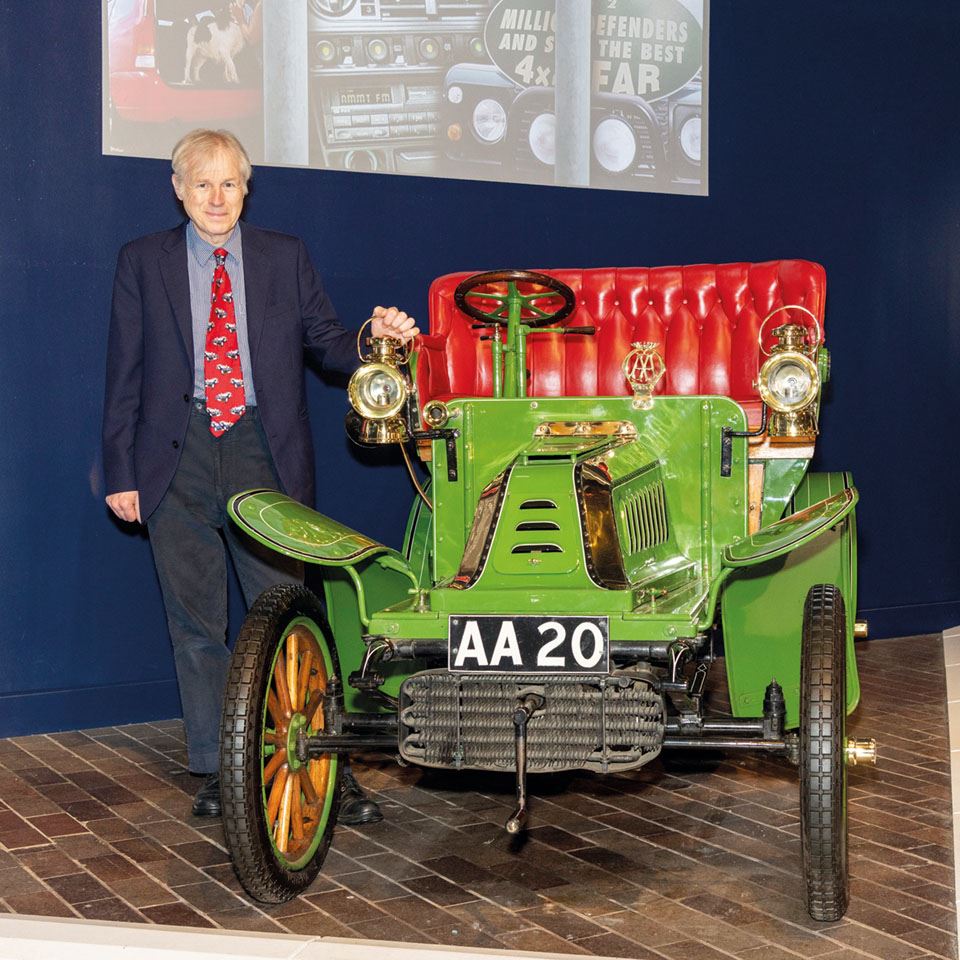 ME WITH THE 1903 DE DION BOUTON WHICH STARTED THE COLLECTION. 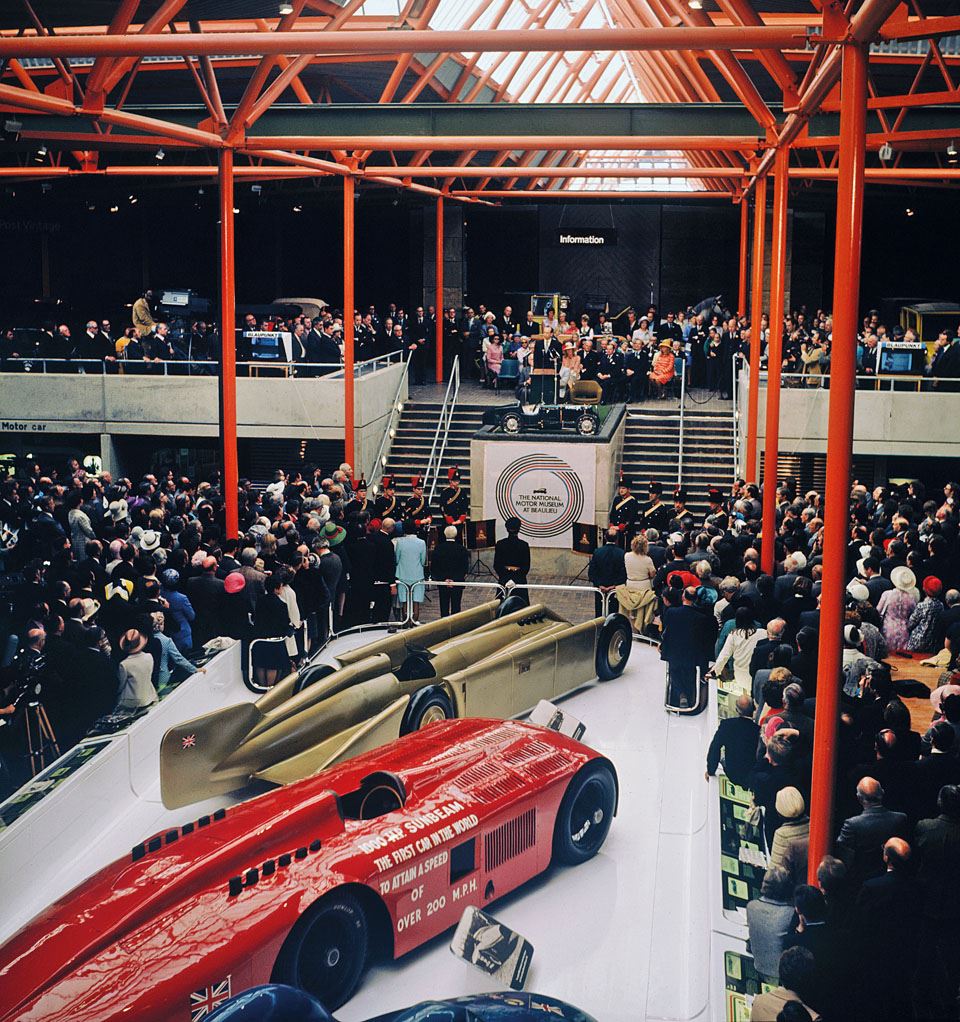 THE GOOD AND THE GREAT OF THE MOTORING WORLD GATHER AT BEAULIEU FOR THE OPENING OF THE NATIONAL MOTOR MUSEUM BY HRH THE DUKE OF KENT. 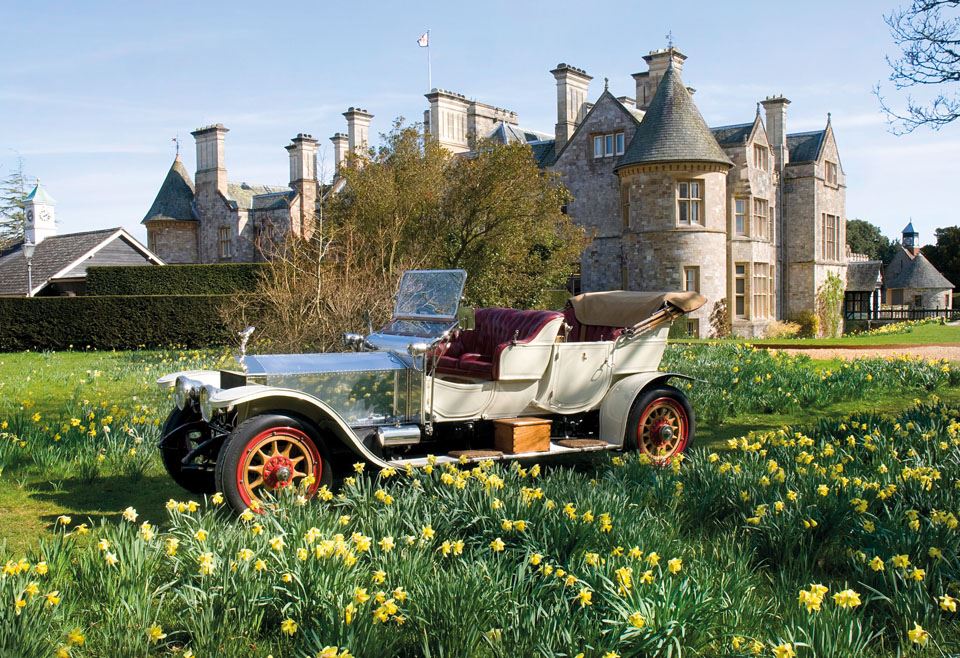 THE 1909 ROLLS ROYCE SILVER GHOST WHICH MY FATHER DROVE ON CAR RALLIES AROUND THE WORLD.

Historic as these vehicles are, it is often the cars we remember from our formative years that we spend most time over. For people like me who grew up in the 1960s, the sight of our 1960 Triumph Herald, the 1963 Hillman Imp, the 1963 Mini Cooper-S and 1966 Ford Anglia Super 1200 all have the power to take us back to memorie s of family holidays, going to school or learning to drive.

We aim to bring together vehicles and collections to celebrate everything about motoring and the relationship between the car and society. It is a rich culture which reaches into everybody’s lives. One of the aspects I most enjoy is the art and design which motoring has given rise to, starting with splendid posters of the Edwardian period. Our collection is evidence that the motor car is not just an engineering achievement but also the product of artistic expression. As cars got faster, so advertisers found new ways of conveying the sense of speed and excitement associated with motoring. Other artists devoted their skills to sculptural forms, initially mascot design, and then the styling of vehicle bodywork which helped to give each model its personality. Little wonder that the car was, and to many still is, the ultimate object of desire. 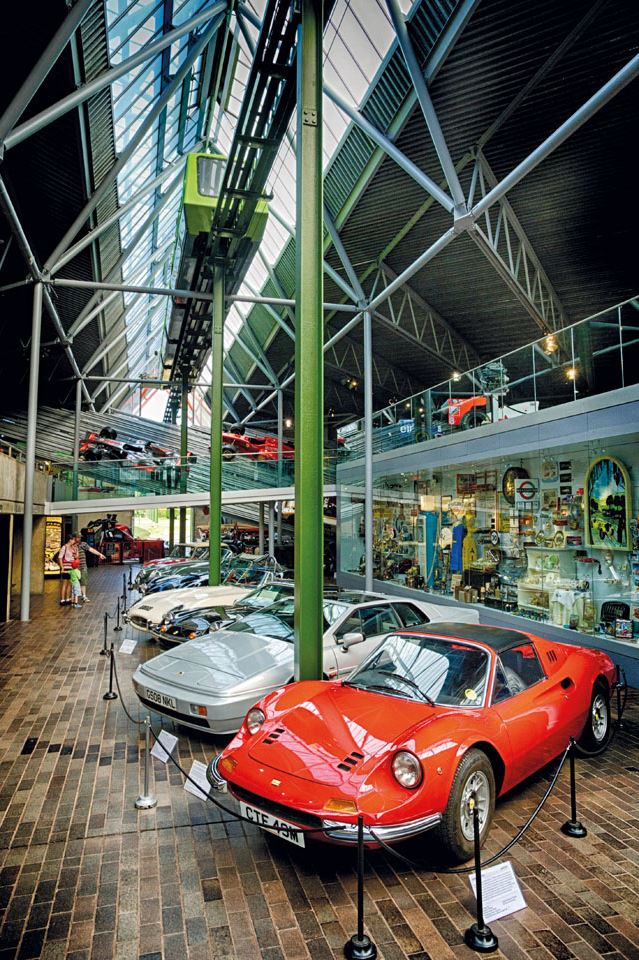 VISITORS GET TO SEE THE COLLECTION FROM THE FLOOR OF THE MUSEUM AND AT HIGH LEVEL FROM THE MONORAIL WHICH PASSES THROUGH THE ROOF.

We are also keen to strengthen our role as a centre of learning and knowledge, using our collections to influence and inspire thinking about the future of road transport. One of the ways we hope to do this is to open up the contents of our Collections Centre, using this to engage and inspire the next generation of motoring enthusiasts.

Needless to say, the responsibility of conserving and caring for such large collections, and exhibiting them in ways that enable the public to lear n from them, all costs money. In its early years, the trust was supported by the British motor industry before its decline, but now we are increasingly supported by individuals who see value in what we do, and sometimes wish to connect with a particular project close to their heart.

The end of newly-built internal combustion engines may be on the horizon, but that doesn’t mean the end of driving. Electric or hydrogen cars, self-driven and autonomous, will all have a place in the museum of the future. Our challenge is to create the space and capacity to continue collecting, because the story of motoring is far from finished.