Felixstowe Flying Boats, May Harden & May

I visited the Solent Sky Museum in Southampton, seeking information about May Harden & May, who had been acquired by Holt Thomas’s organisation, The Aircraft Manufacturing Company (AIRCO), to build flying boats. 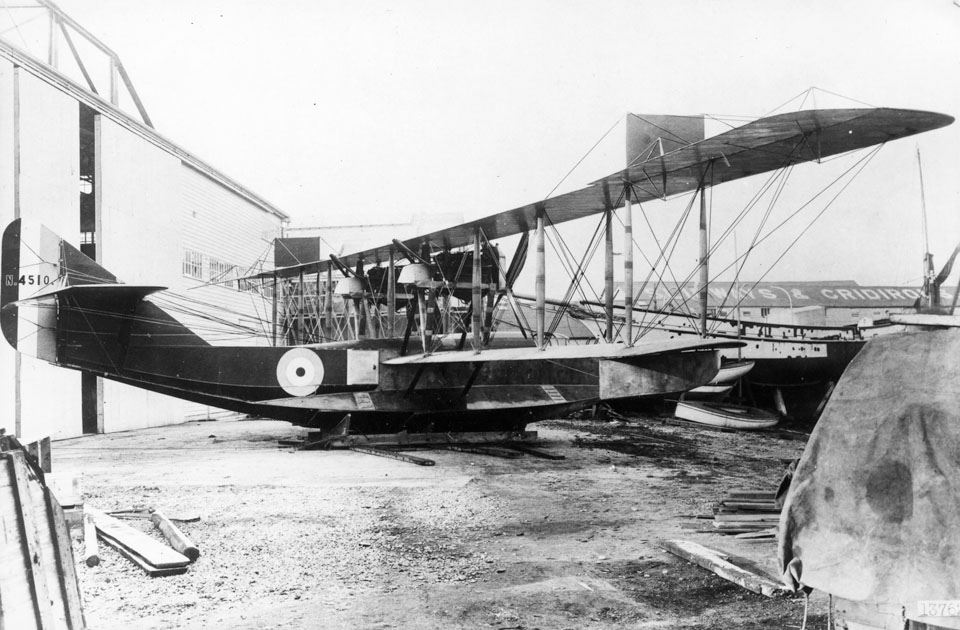 AIRCO, founded by George Holt Thomas in 1912, employed Geoffrey de Havilland as Chief Designer in 1914. Progressively during World War 1 AIRCO, based at Hendon, expanded by creating new companies, acquiring existing companies and using contractors to manufacture aeroplanes, flying boats, airships, aero-engines, and propellers. This collection of businesses, whilst being part of the AIRCO Group, continued operations under their original names, including May Harden & May, which became a prime subcontractor. By 1918 AIRCO were the largest aircraft manufacturer in the World.

The first successful flying boats were designed and built in the USA by Curtiss. John Cyril Porte joined them from England, but at the outbreak of the First World War, Porte returned home, and re-enlisted in the Royal Navy Air Service and was stationed at Hendon. He arranged for the Admiralty to purchase 2 Curtiss H4 flying boats and base them at Felixstowe Air Station, with a further 8 being built under licence in England.

This was the beginning of flying boat involvement by May Harden & May who, in 1915, built the hulls for the 8 Curtiss H4s with the flying structures built by AIRCO at their Hendon works and with final assembly at Felixstowe.

Porte worked progressively to improve the design of the hulls at Felixstowe improving their operational capabilities for the North Sea, and the subsequent designs built in England were called Felixstowe Flying Boats.

May Harden & May were experienced builders of high performance yachts, and they were able to use this knowledge to manufacture flying boat hulls. Each flying boat was then ready for final assembly at Felixstowe. Then AIRCO moved their entire flying boat design team from Hendon to Hythe and the full build from hull to completion was carried out in Hythe.

When flying boats were required, AIRCO went to the little yard at Hythe, where the beautiful hulls were first turned out. As demand increased the typical light wooden sheds of a yacht builder’s yard rapidly gave way to a much larger construction shed. This in turn was greatly extended and then a specially designed building for hull construction built, with extensions provided by H.M. Office of Works and designed by Sir Frank Baines; this building now has listed status.

Two 190hp gas engines, running on producer gas, each driving a 120kW generator, supplied power for the site, and a new slipway was constructed enabling launching at any state of the tide.

The company built a number of hulls for other manufacturers including Phoenix and the famous Fairey yard in Hamble, on the Solent using the new lamination process that made the hulls stronger and lighter.

Porte designed a huge flying boat, which was nicknamed “The Baby”, with a wingspan of 124 feet and a ply covered hull 56’10” long, powered by three Rolls Royce Eagle engines. This had a single step hull with the planing bottom with an accentuated V-form cross section. Ten were built by May Harden & May with final fit out in Felixstowe.

The majority of Felixstowe Flying Boats built by May Harden & May were called the F2A, and later the F5. The firm turned out an astonishing 71 of them.

Although designed around the Curtiss H12 the F2 and later models had significant improvements, especially in hull design, by Porte. The hull had a 20 degree vee bottom with two steps and was constructed from Mahogany double diagonal planking 4” x 3/16” with a varnished fabric interface. The planks secured together with 1/16”copper nails and planking secured to the ribs with brass screws size 4 x ¾”. (A section of hull and rebuilt nose section can be seen at the Norfolk & Suffolk Aviation Museum).

Two 345hp Rolls-Royce Eagle V111 engines provided power with tractor propellers. They had a crew of four with pilot, second pilot/navigator (in an open cockpit), engineer and wireless operator. They were fitted with four Lewis guns, one in the nose cockpit, one in the upper rear cockpit and one each in the waist section providing the armament. There was room for two 230lb bombs carried in racks under the lower wings. The wingspan (upper wing) was 95’ 71/2” with the lower wing 68’ 5”, an overall length of 46’ 3” and a maximum loaded weight of 10,978lbs with a maximum speed of 95 mph at 2000ft.

The total airframe price was £6,738 with Rolls-Royce engines at £1,622.10s extra each (instruments and guns at additional cost). The planes were primarily used for anti-submarine and general reconnaissance work.

Although there were other builders of Felixstowe Flying Boats, May Harden & May were the “Design Authority” for the whole Felixstowe series.

Harry Povey joined May, Harden and May (AIRCO) in 1917 from the Royal Aircraft Factory at Farnborough as Works Manager, and he would later become a stalwart of the great de Havilland Aircraft Company. After this Alec Harden joined AIRCO as a director and the May brothers auspiciously returned to boatbuilding in Lymington because the end of World War I, saw the enormous demand for aeroplanes disappear and AIRCO were struggling for work. Although they converted existing military aeroplanes for civil use, and designed and built civil types, insufficient demand led to the closure of the company in 1920.

The site at Hythe has survived to this day. After AIRCO moved out it was used by Supermarine to build flying boats and later was the base for the Empire Flying Boats. Jason Carrington is now (in 2020) using the very same sheds building carbon race boats including the INEOS Ben Ainslie Racing America’s Cup challenger. 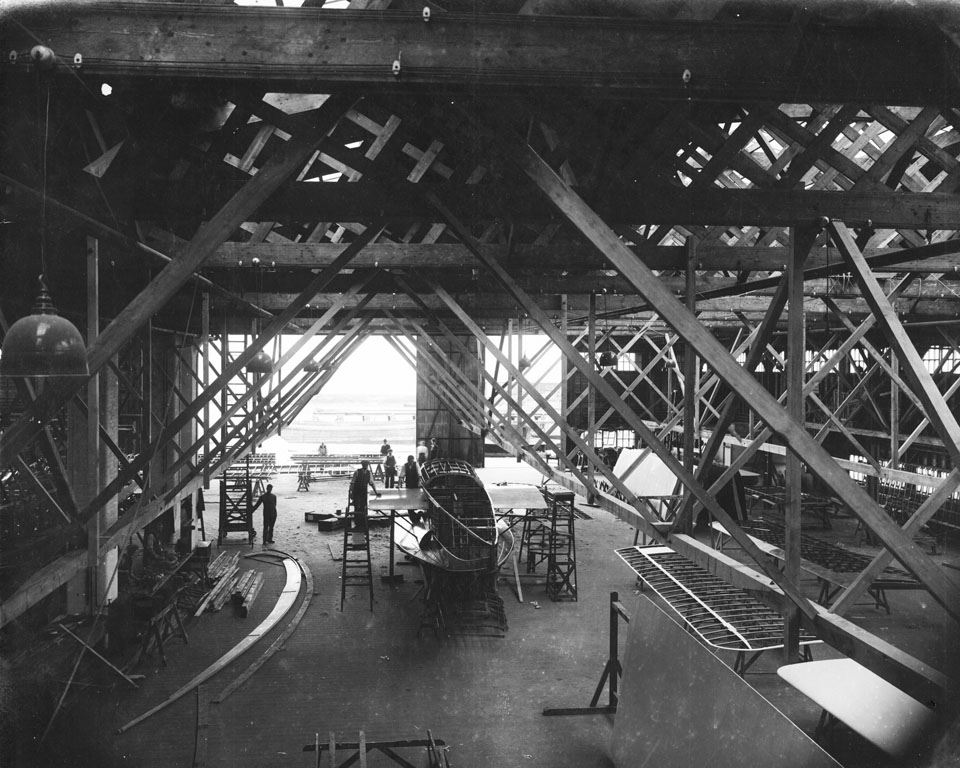 CONSTRUCTION IN THE ORIGINAL WORKS MAY HARDEN & MAY 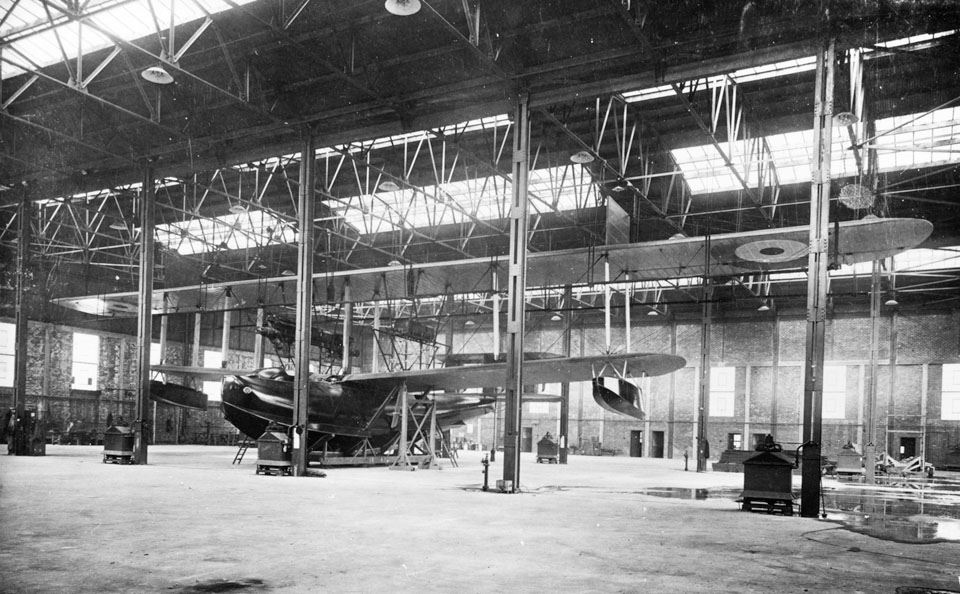