The enchanting Îles de Lérins lie in the sparkling Mediterranean Sea, just 5 k’s away from the Bay of Cannes. Made up of 2 enchanting islands and a couple of uninhabited islets, this small archipelago on the Côte d’Azur is home to stunning anchorages, fascinating history, pine scented forests and some rather talented monks. 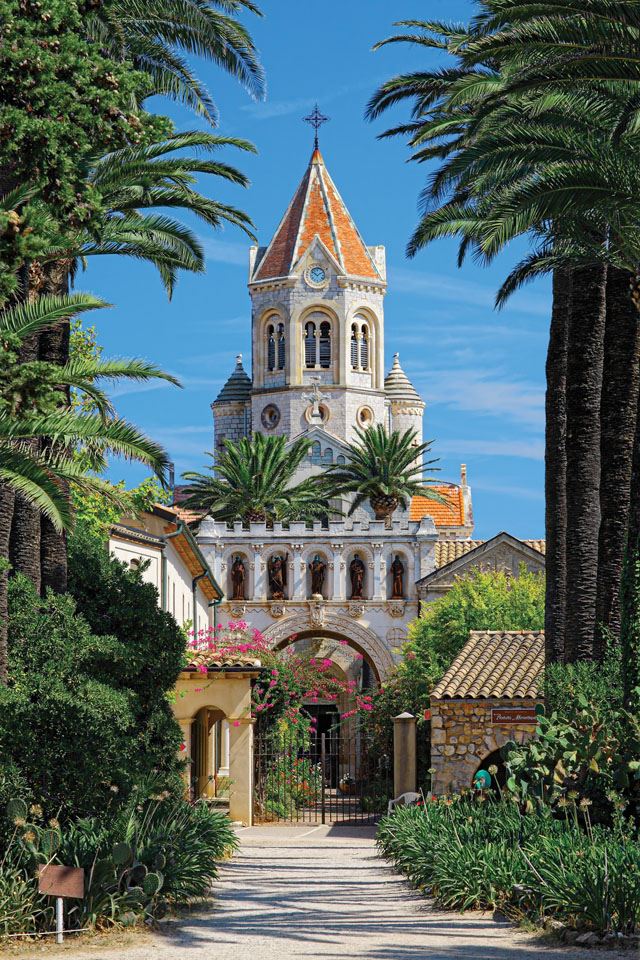 LERINS ABBEY (ABBAYE DE LÉRINS) ON THE ISLAND OF SAINT-HONORAT

The islands are a marine paradise with coves of crystal clear waters that provide a perfect anchorage between Sainte Marguerite and Saint Honorat. It’s a popular spot during the summer, where many enjoy swimming, snorkelling and picnics on board. However, to really appreciate the beauty and tranquillity of this idyllic location, the secret is to hang on just a little longer. By sunset, most have been lured back to the night life of Cannes and Antibes, allowing you to enjoy the peace of a near-empty anchorage, dining on deck with the lights of the French Riviera twinkling from the mainland.

The coastline around this archipelago is beautiful and well worth admiring from the water. However, these islands do deserve a shore trip and to do this, you would need to take one of the frequent ferry shuttles from Cannes or Nice. Please read on and once you’ve tried it, I’m sure that you will agree that both the islands of Sainte Marguerite and Saint Honorat will warrant multiple visits to their interior. 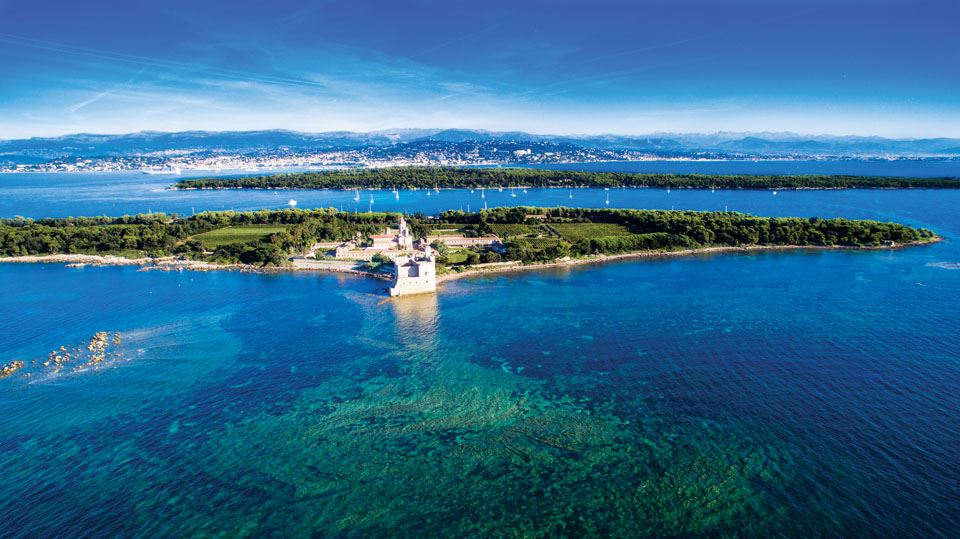 THE ÎLE SAINTE-MARGUERITE AND THE ÎLE SAINT-HONORAT OFF THE FRENCH RIVIERA, IN CANNES © MAIRIE DE CANNES – AXIS DRONE

The Island of Sainte Marguerite

The largest island, named Sainte-Marguerite, is covered by Aleppo pines and eucalyptus trees, entirely planted by man during the 19th century. Marguerite’s Fort Royal is notoriously famous for the incarceration of a secret prisoner during the reign of Louis XIV. The story of the Man in the Iron Mask and the rumours surrounding him have been recounted over time, most famously in a novel by French writer Alexandre Dumas in the 1840s and more recently in a Hollywood movie starring Leornardo de Caprio. The identity of the prisoner has never been revealed and remains a secret to this day. The story goes that the unfortunate man was refined and well-mannered, fuelling rumours that he was highborn. Numerous theories surrounding his identity have surfaced over the years from the disgraced son of the King, to the bastard child of the King’s mother and that of a secret twin brother. The detailed history can be explored at the Fort Royal and its museum, ‘Le Musée de la Mer’ (Museum of the Sea). It is a must for anyone visiting Sainte- Marguerite.

With the pine forest surrounding the lagoon of Batéguier providing sanctuary to a host of migratory bird species, Sainte Marguerite attracts many bird enthusiasts and hikers. There are numerous hiking trails to explore throughout the 152 hectare forest, and hiking is the best way to discover all the island’s secret nooks, crannies and coves. A full coastal loop is around 8 km’s and may be walkedin about 3 hours. The trail at Dragon Creek on the southerly side leads to small coves, much loved by day trippers who come to enjoy the beaches and views of all the lovely yachts at anchor.

There are around 20 residents lucky enough to have a privileged address on the island. During the summer months they share their picturesque village with the many tourists, offering light refreshments at snack bars and restaurants. 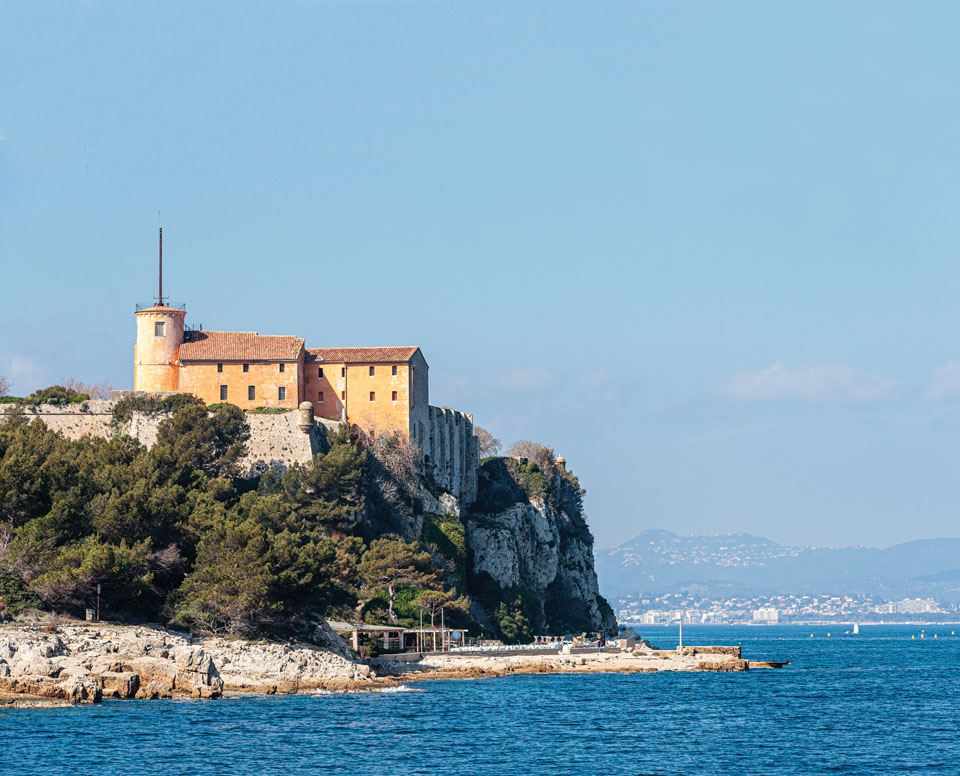 FORT ROYAL ON THE ISLAND OF SAINT-MARGUERITE

The Island of Saint Honorat

Saint Honorat owes its name to the hermit who founded its Abbey. Sainte Marguerite (name sake to the main island) was his sister. A community of Cistercian monks have lived in the monastery here since the 5th century. Saint Honorat’s ‘Abbaye de Lérins’ has several cloisters and chapels but at its very heart is the Monastery Tower, which was built in stages over a prolonged period of 3 centuries. The tower was originally used as a fortress until the 14th century, when the monks transferred the relics of Saint Honorat to its Chapelle St Croix. Over the subsequent centuries a number of cloisters were built around the tower until finally, by the late the 15th century, the tower found itself at the centre of the monastery building. The church here is open to visitors, who are welcome to share prayer times with the monks throughout the day.

Tourists can enjoy wandering round the island to visit its chapels and will find that the monks are delighted to give visitors guided tours. Several 10th century chapels and some 11th century ruins are dotted about within strolling distance. In particular, the ruins of Chapel of St Michael to the north are quite enchanting. Close to the Chapelle de la Trinité, are found the fortified batteries and one of the island’s two hotshot furnaces which date back to 1794. The furnaces were used to heat cannonballs to high temperatures, so that they were red hot when fired out of the cannons. All this can be explored via paths meandering through the olive and pine trees. It’s a very peaceful way to spend an afternoon.

After exploring all that history and the architecture, you may wish to head to the Saint Honorat vineyard. The island’s vintages are celebrated and their quality is recognised by oenphiles the world over. Passionate wine producers since the Middle Ages, the monks skilfully cultivate their 8 hectares of vineyard, using ancient methods to produce exceptional reds and whites. A number of liqueurs are also produced, including a Limoncello they have named Lérincello, distilled with the lemons of nearby Menton and an aromatic, herbal liqueur named Lérina. Needless to say, a vineyard tour and wine tasting should be a compulsory part of any tour.

Both islands are accessible all year round by a 16-minute ferry ride from Cannes. Sainte Marguerite also has a ferry departing from Nice – this takes about an hour. There is truly something for everybody from beaches and hiking, flora and fauna, culture, history and museums, wine and restaurants. With so much to discover ashore Les Îles de Lérins, one trip alone would only touch the surface of what they have to offer.

Or of course, you could just admire it all from your anchorage on a lazy, summer’s afternoon… 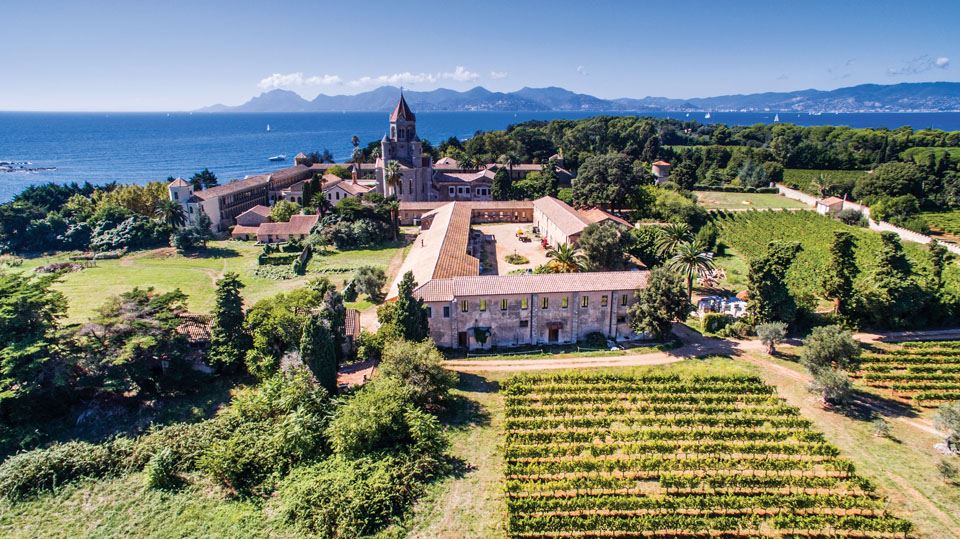