Lepe Country Park – The WWII History of our Solent Shore

Lepe Country Park with its lovely shingle beach offers an idyllic setting for water sports enthusiasts and young families alike. Wind and kite surfers enjoy their sport in safe and sheltered waters; families and children can swim, paddle and rock pool to their hearts content. The views across the Solent to the Isle of Wight are stunning on a sunny day. You can make out Portsmouth’s Spinnaker Tower in the distance, the Solent Forts on the eastern horizon and just about spy Hurst Castle to the west. Whiling away a couple of hours just watching the endless stream of yachts, ships and ferries on this busy stretch of water is a fabulous way to relax. 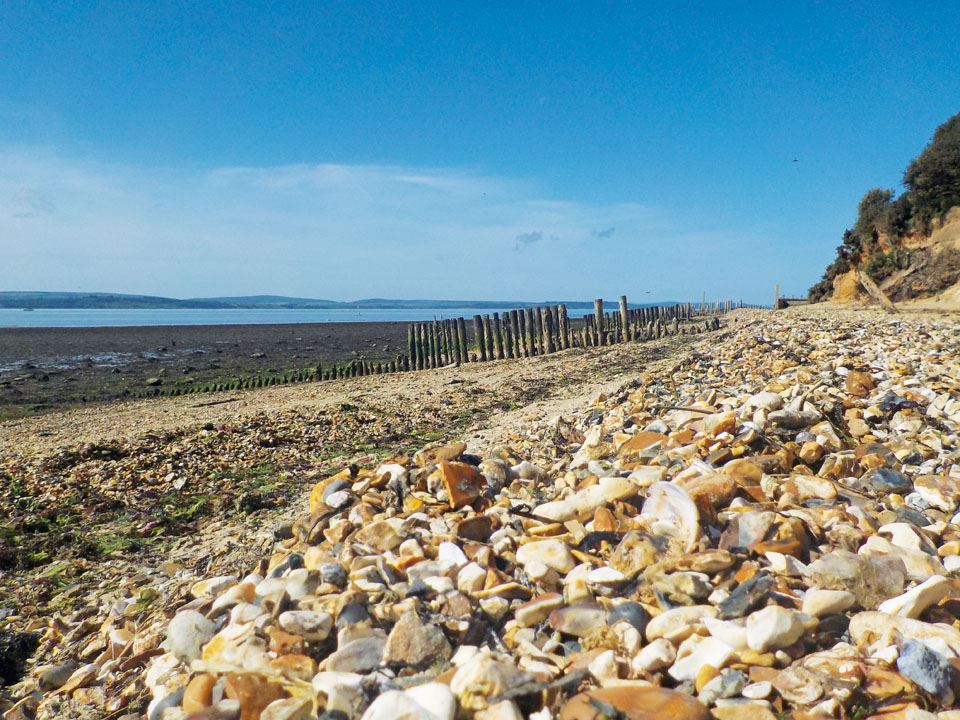 As the children beachcomb and catch crabs amongst the rocks and breakwaters, take a short walk further down the shore, east of the ‘The Lookout’ café. This delightful stretch of coastline, an ‘Area of Outstanding Natural Beauty’, has an impressive history from a much less peaceful time. 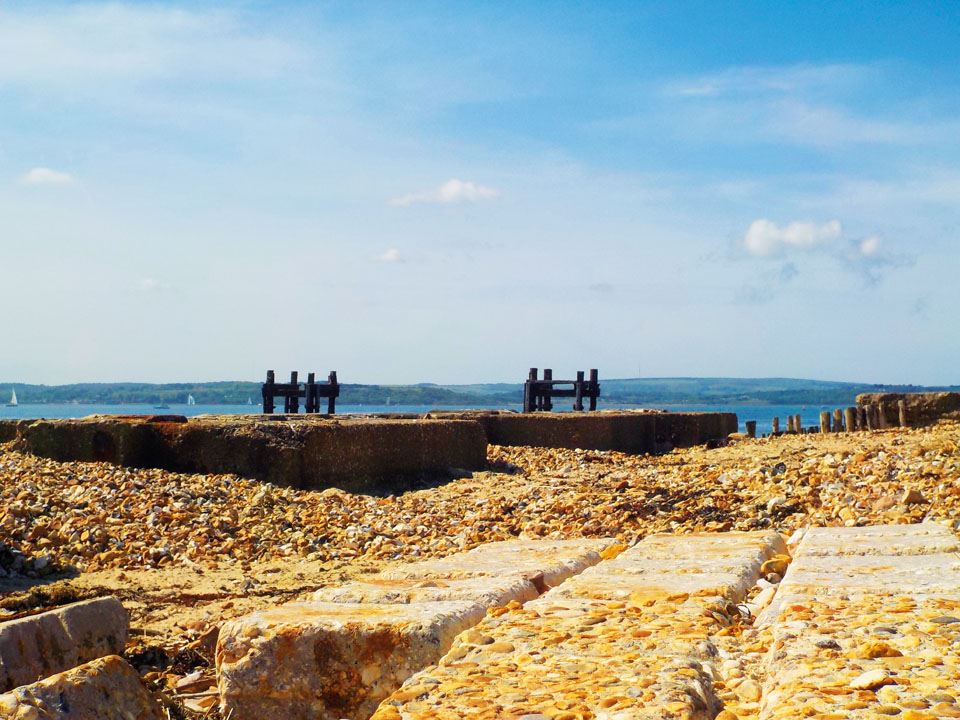 There were no surfers on the beach and not a child in sight hunting for sea treasures. Britain was at war. It was all hands on deck on our South Coast, as everyone made ready for D-Day and Operation Overlord.

Circa 1942, the construction of the concrete embarkation hards at Lepe began. Beach hardening mats were put in place to support the many troops, tanks and equipment as they were loaded on to Landing Craft Tanks (LCTs) bound for Normandy’s Gold Beach. The beach hardening mats served to re-enforce the shingle, providing a firm base for the troops to drive over and reach their LCTs. There were two hards built at Lepe: one in front of Lepe House on the Lepe Estate (‘Q’ Hard) and the larger ‘Q2’ Hard a little further east at Stanswood Bay.

Metal support structures known as Mooring Dolphins were sunk into the Solent, perpendicular to the beach. They were used to secure the loading vessels, and with a series of ramps laid across them, served as a pier to allow the embarkation of troops and equipment to the loading vessels. 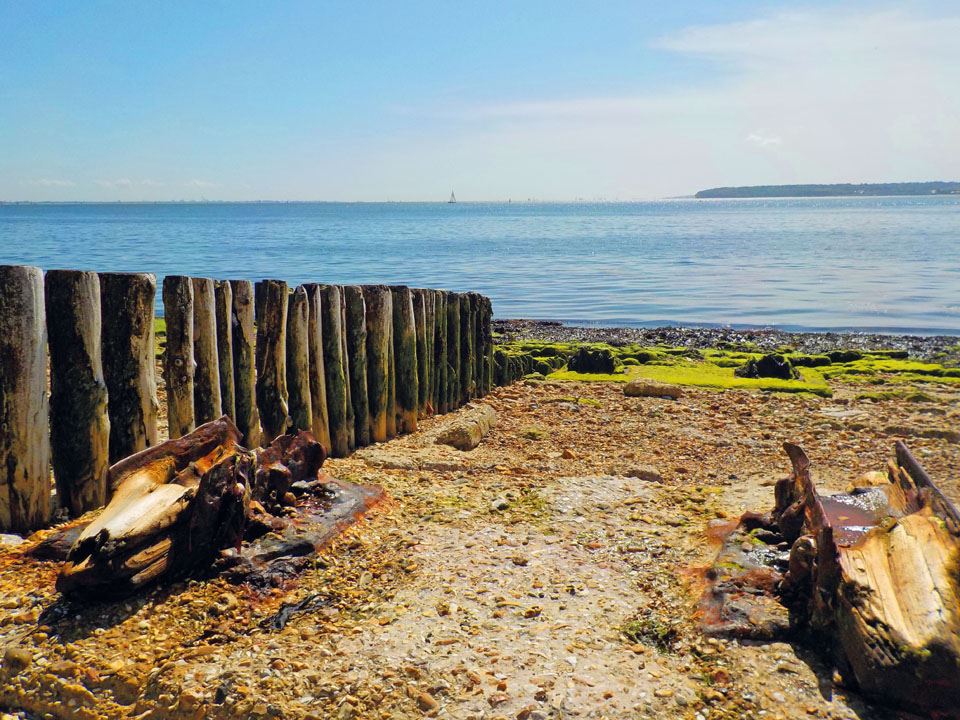 Two additional Dolphins to the west of the pier protected the moored vessels from drifting with the strong, local tides.

During the war effort, nearby Exbury House served as HQ to HMS Mastodon. From here were controlled the numerous ground forces, marshalled up and down the Hampshire coastline and in the New Forest, as they awaited their embarkation for the Normandy Beaches. According to WWII war records, 1579 men and 292 vehicles boarded 40 LCTs at Lepe during the months leading up to D-Day, and post D-Day this increased to 6407 men and 2037 vehicles boarding 122 LCTs. Lepe was one of many beaches on the South Coast involved in this extraordinary operation, with up to 68 hards having been built. These included hards at nearby Southampton, Gosport and one opposite Berthon HQ, next to what is now Lymington’s ferry terminal. 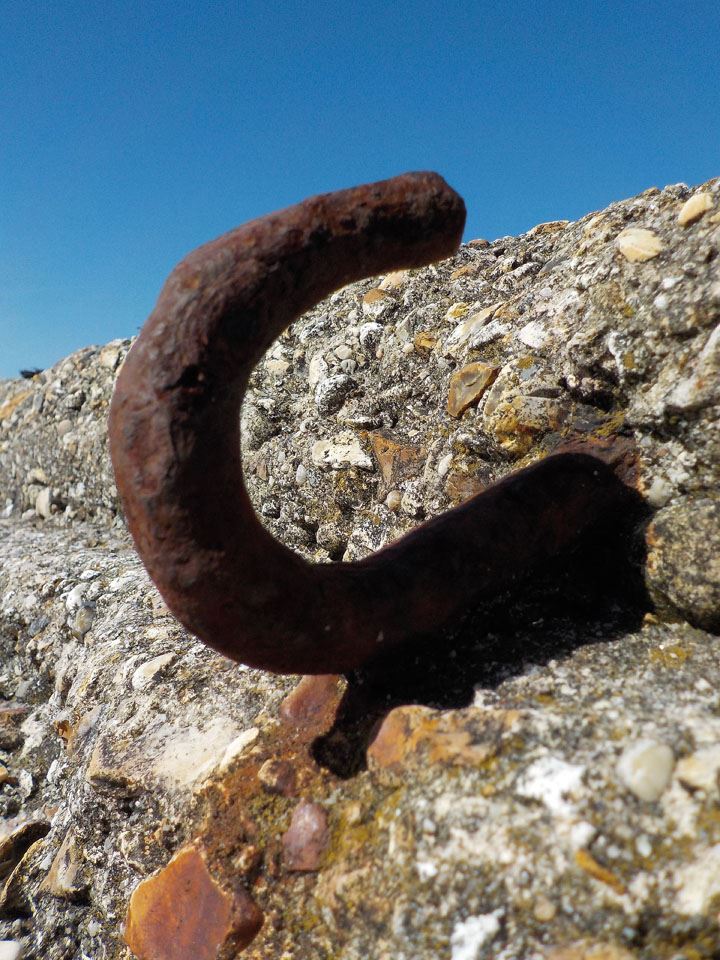 Around 1943, the site at Lepe was chosen as one of several locations to partially construct components of the temporary, portable harbours, known as Mulberry Harbours. Essential for offloading cargo and supplies to the troops in Normandy, the Mulberry Harbours supplied the army whilst France’s ports and harbours remained under Nazi control. These were constructed in the UK, partially assembled in various locations, and towed in sections across the Channel to the Normandy Beaches.

Their build and transportation from our South Coast to France’s northern shores were a colossal effort, huge technological and engineering achievement, as well as the best kept secret on the planet.

The Mulberry Harbour component partially assembled at the Lepe site was the Type B2 Phoenix Caisson. These giant structures served as the Mulberry Harbour floating breakwaters, creating sheltered water within the harbour itself. Built with boat hulls to enable towing, the caissons came in various sizes. Each had storage space and simple accommodation for crew. Some of the largest caissons (18m in height) also had defence towers, mounted with anti-aircraft guns.

The Lepe caissons measured 62m in length, 13.5m in width and 10.6m in height. Six of them were simultaneously assembled at Lepe on keel blocks upon huge, concrete construction platforms. Twelve carriages on rolling tracks, laid on concrete walls parallel to these platforms, allowed their onward movement to the metal and wooden launch slipways, helped along by a series of pulleys. Winches would then control a caisson’s sideways launch into the Solent from where it would be towed by tugs up Southampton Water for finishing touches before crossing The Channel. 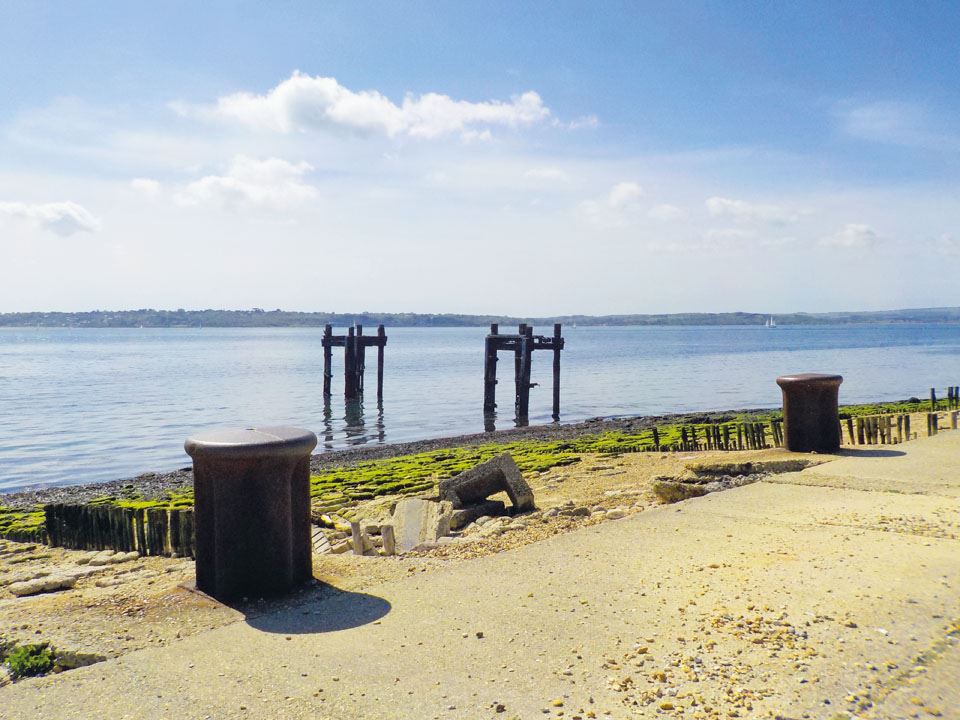 Remains of this significant contribution to the UK’s war effort can be easily explored at Lepe today. The most prominent feature and now a permanent Solent landmark are the two additional Mooring Dolphins built west of the embarkation pier. These magnificent twins grace the front cover of this publication.

Though a little storm damaged at the far eastern end, you can walk right over the construction platforms where the six caissons were built. Before the concrete was fully dried, a worker walked across this hard, leaving his footprints for us to find 80 years later.

Running east to west are the rolling track walls that helped manoeuvre the giant caissons to their launch positions. Visible at low tide are the eight slipways used for the caissons’ launchings, now covered in seaweed and teaming with sea life. Their broken up, metal and wooden tracks lie scattered between them, worn by the waves and tides. 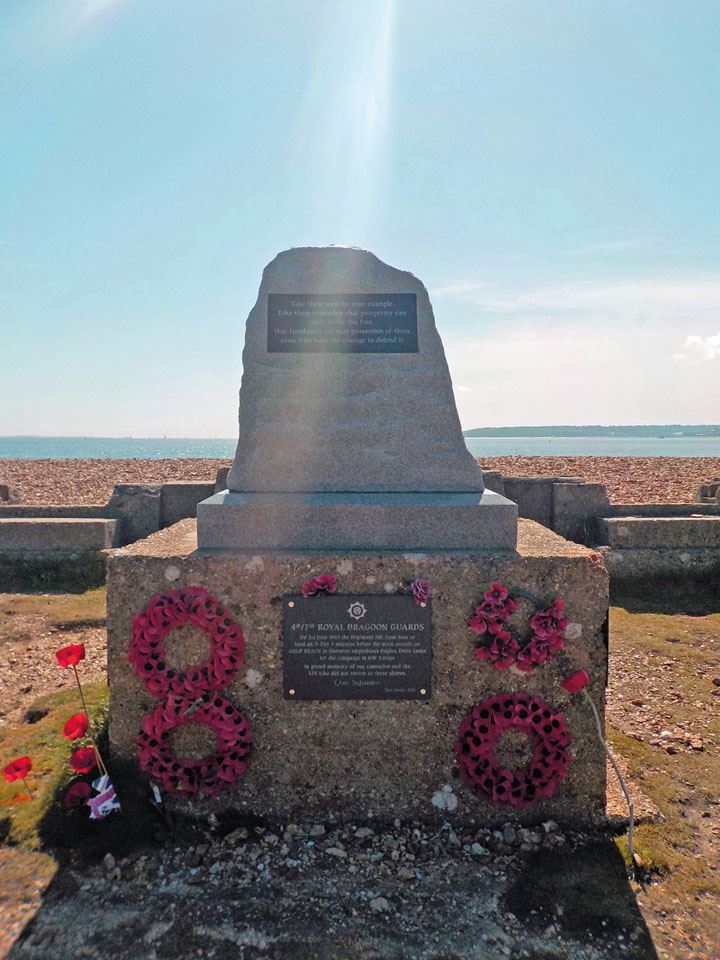 Fragmented beach hardening mats pepper the beach around the location of the slipways and the pier, broken up like big chunks of concrete chocolate bars, and the hooks that helped secure them hold fast to the wall.

Two huge mooring bollards stand proud near where the pier would have been, still looking strong and sturdy.

Head slightly inland and you will find the concave base for a water tank that served the workshops and crew accommodation. 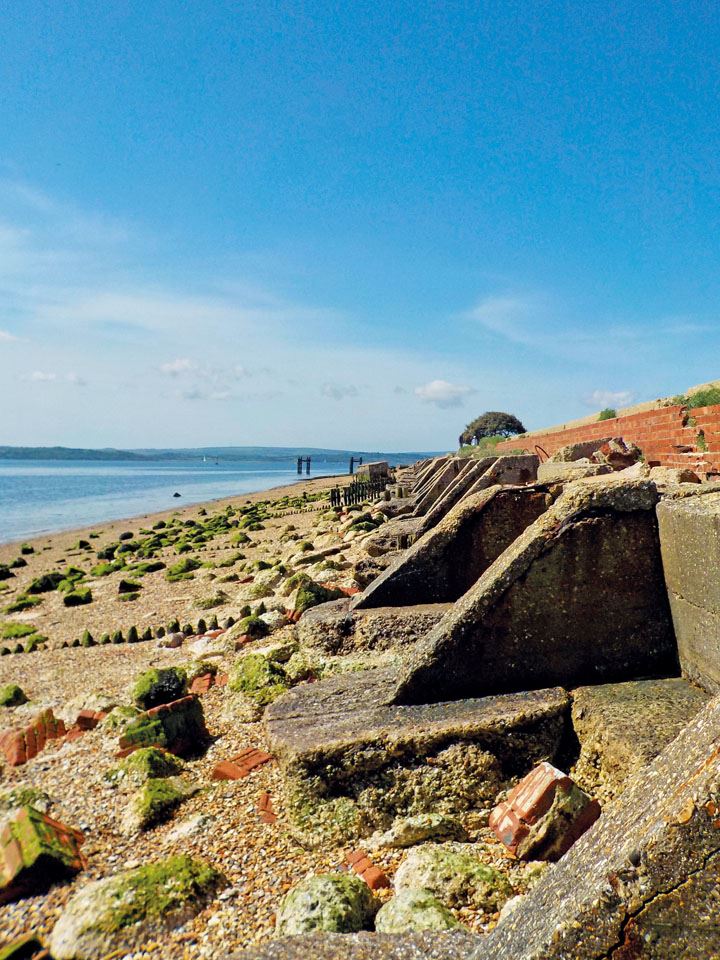 Behind the track wall and the slipways, is the WWII Memorial honouring the 4th and 7th Westminster Dragoon Guards. Having embarked at Lepe, the Dragoon Guards claim to have been the very first unit to reach Gold Beach in Normandy.

So when you’re next cruising past Lepe’s tranquil setting, or building sandcastles on a family day out, see what else you can find. There is so much else to explore, local history in abundance, and you can definitely make out the Mooring Dolphins from the Solent. With a little imagination, you can hear the screeching of winches, shouting of orders and grinding of gears and rolling stock – echoes of more troubled times and a country at war. Also take a moment to think of those who made the ultimate sacrifice so that children today can find sea treasures amongst these ruins. 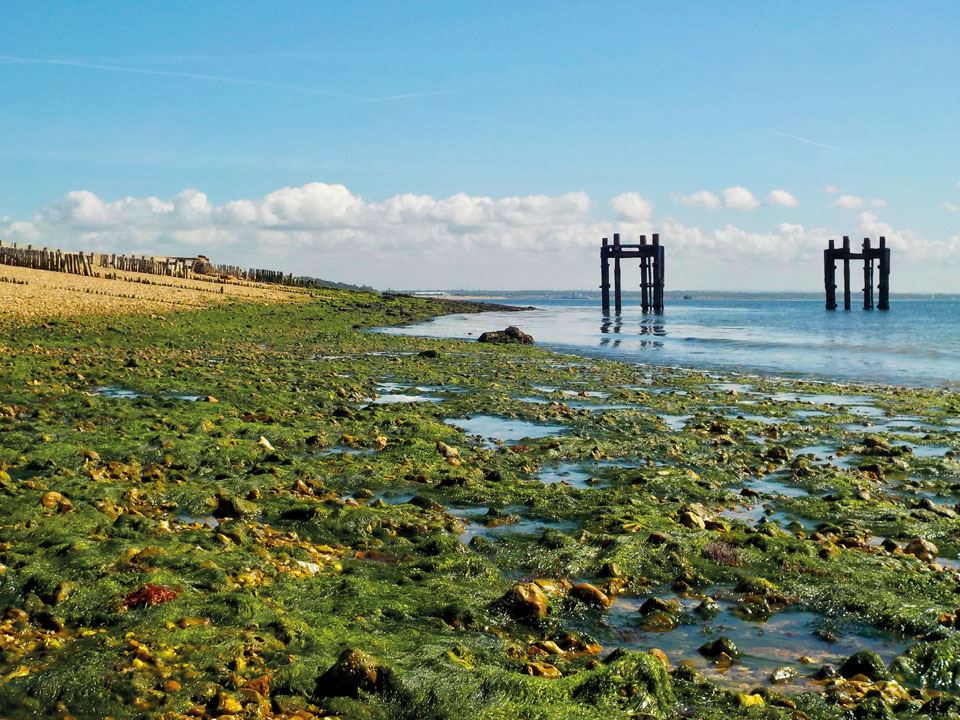 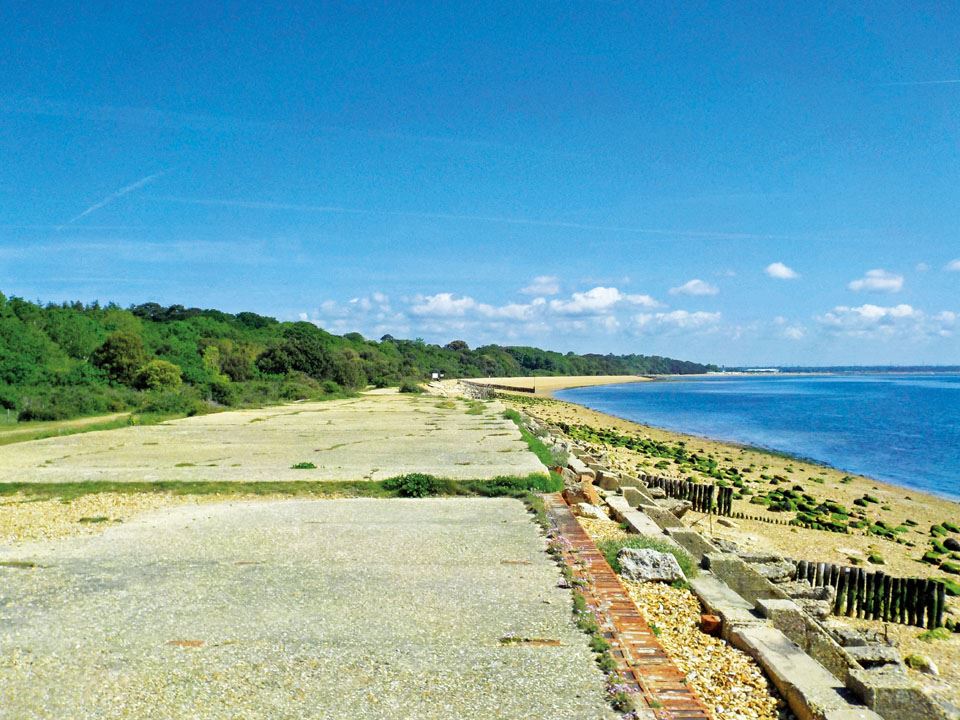 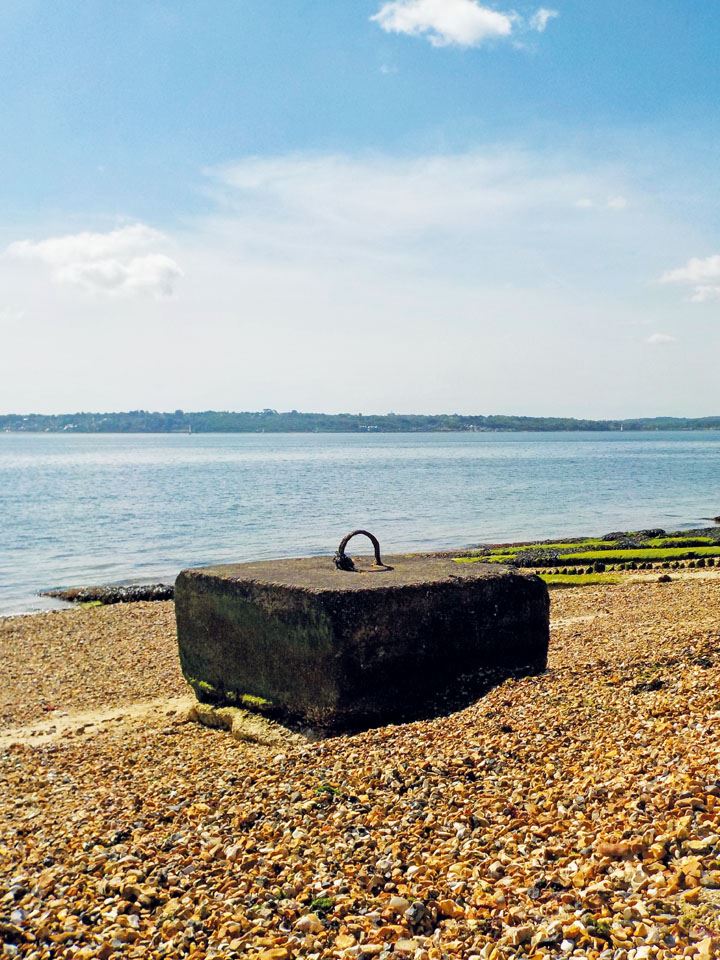