Réflexions On The Côte D’azur

It was the end of a highly successful charter. The guests had been easy and the weather, up until the last day, had been fabulous all the way north from Sicily, where we had picked up our ten American guests two weeks earlier. 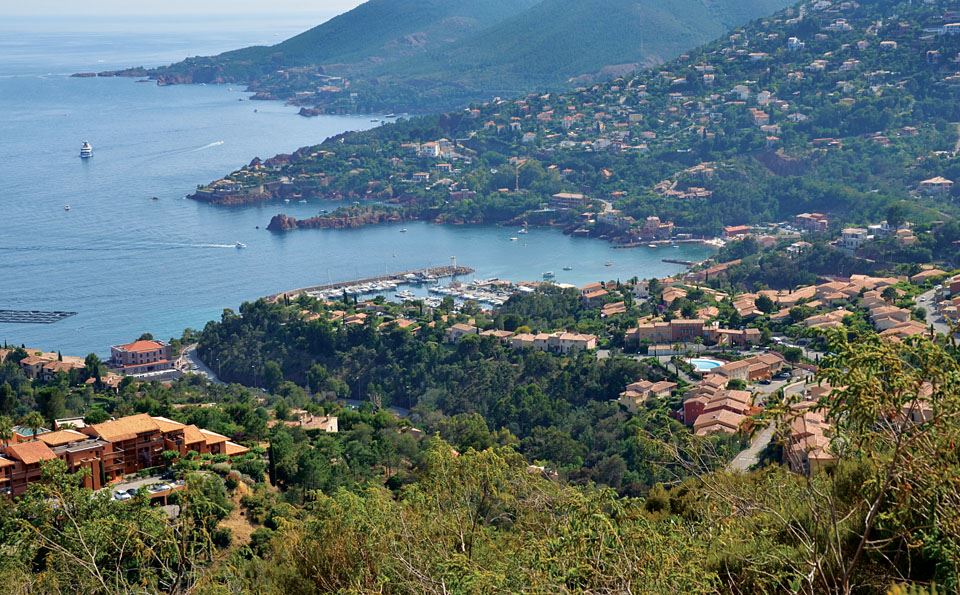 Unfortunately, there was an unexpected change, and the wind was blowing a steady force 6, gusting force 7, out of the west. I had booked a berth in the port of Cannes for the last night, so that the charter guests could enjoy an evening in one of the fleshpots of the Côte d’Azur before flying out on their jet from Cannes airport. The weather had caused a couple of the yachts in the port to delay their departure, and in the last week in August, there will never be a spare berth for a 40 meter motor yacht! The guests were understanding, and as dusk deepened, I conned us down to the anchorage off Theoulesur-Mer, just past Mandelieu-la-Napoule, at the western end of the Bay of Cannes. The holding is pretty good there, and with four shackles of chain on the bottom, I felt comfortable and organized the anchor watches for the night. 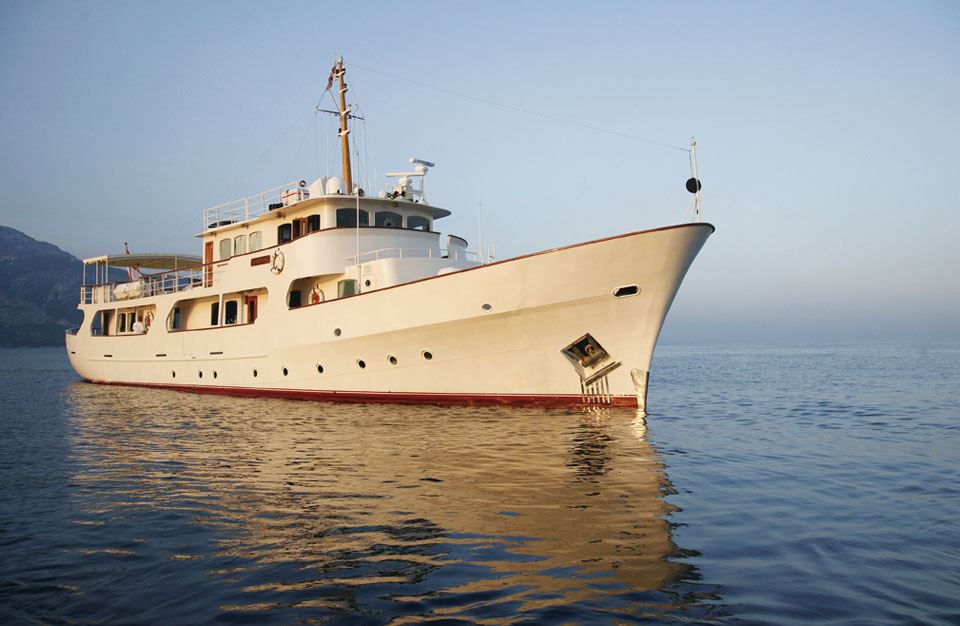 My chef, Dario Tagliasacci, was delighted that he had another opportunity to receive the plaudits from the Americans, who all seemed to think that Dario was a magician – which he was! The stewardesses fussed around the dining salon, decorating the table and getting their instructions from Dario as to how the meal was to be served, while the guests were fed champagne on the aft deck, sheltered from the wind, but able to admire the lights stretching along the coast. The night passed quietly, the guests wove their way to their cabins, often closing one eye to prevent seeing two companionways, and the tired crew gathered up the stack of empty Cristal and Rothschild Chateau Lafitte wine bottles. The wind started to die about 2 o’clock, and I prepared for an early start. 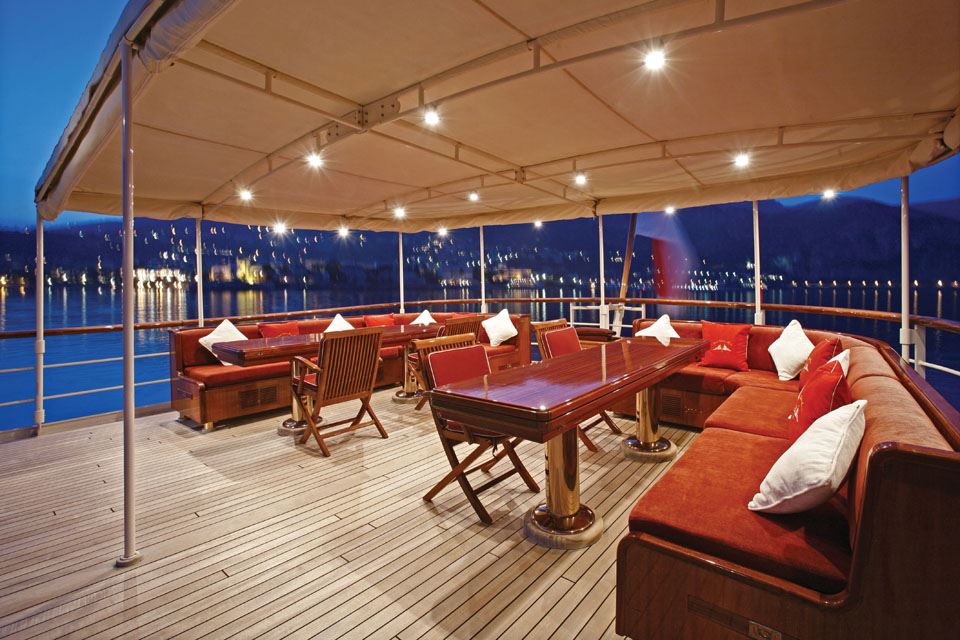 I phoned the Port Office in Cannes the next morning at 6 o’clock, to be told that two yachts were sailing within the hour, and that I would be able to dock at 7 o’clock. The yacht, MONTREVEL, was the quietest boat imaginable, and we were dropping 2 anchors and making fast the stern lines before the guests had risen. Breakfast over, the guests started packing and preparing to depart, I called their pilot at the airport and gave him an arrival time, and after an al fresco lunch, the 10 very happy Americans piled into the two rented people carriers, waved their goodbyes, and set off for the airport. The crew and I settled down to the post-charter debrief, at which I was able to give them the good news that the guests had left a hefty gratuity behind, to be shared out between the nine of us, and I decided to add to their happiness by telling them that I was taking them all out for an end of charter dinner in the Old Town. 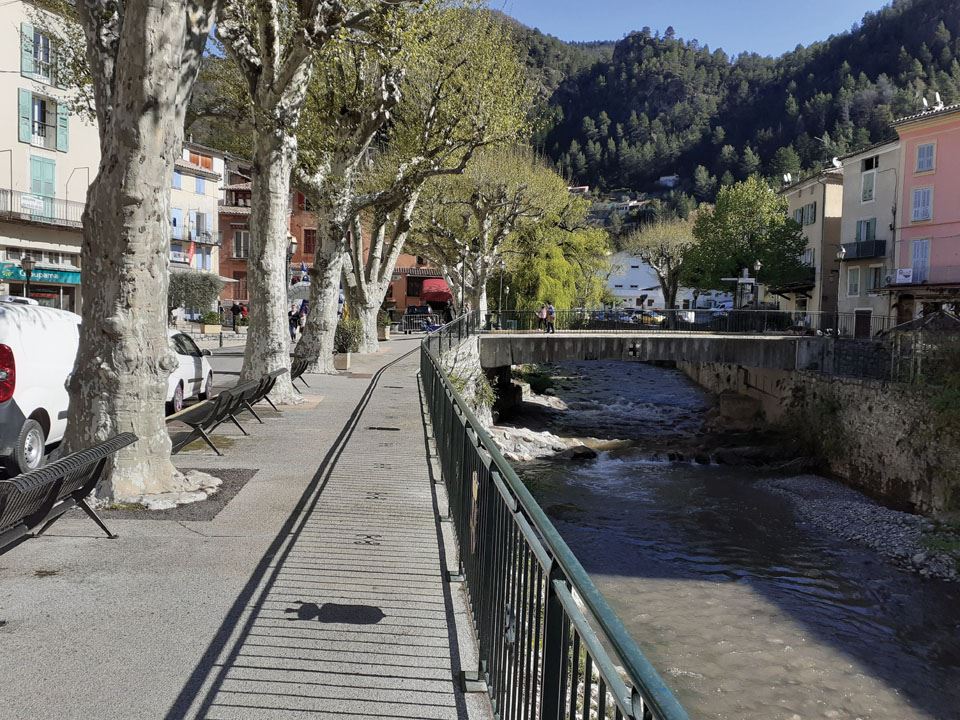 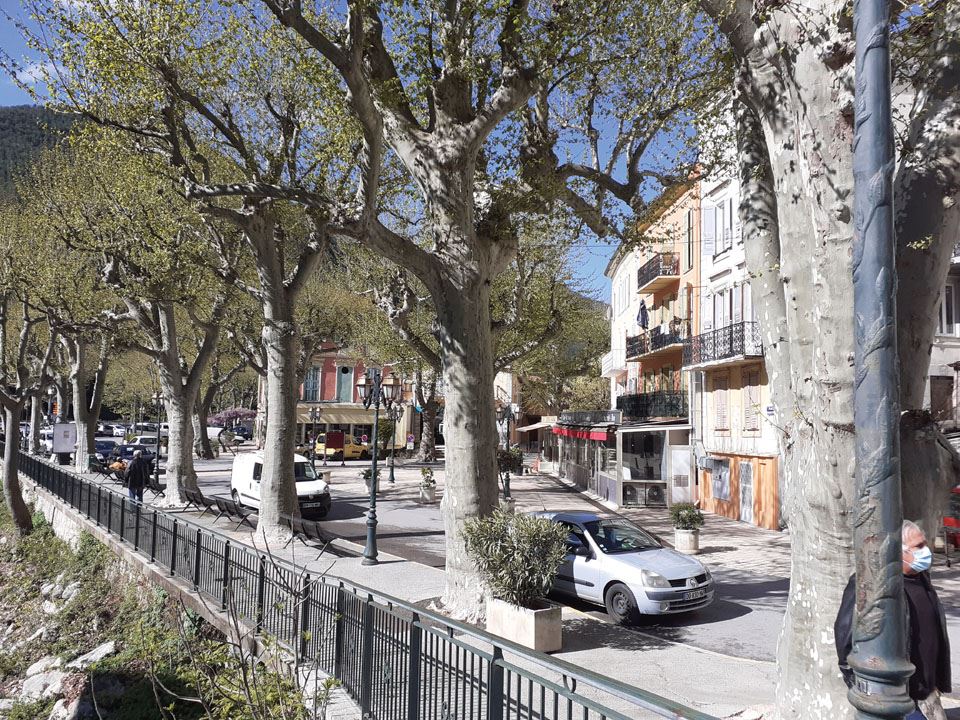 That evening, having taken on a trusted dayworker to mind the boat, we all walked through the glitz and glamour to the old town, and settled down for an excellent, if radically expensive, dinner – food and wine prices on the coast are hideous!

The next morning I settled the Port Office, approved the work list for the next few days, and climbed into my venerable Jeep to drive home for some well earned down time. The drive to the small village in the foothills where I live, takes only an hour and a half, but the difference in the countryside, the people, and the architecture could indicate a change of continent.

Puget Théniers is a small place of only 1,500 inhabitants, including toddlers (only a few of them), and wrinkly oldsters (plenty of them). I live outside the village, about three kilometers away, in a very private little valley that I do not share with anyone else. Driving down the long, steep and wooded driveway, after a hard working period away, is the most wonderful feeling. I might well startle a couple of deer, or a large and bad tempered wild boar, and then the small stone house comes into sight, with the wooden shutters painted Provence Bleu. Habitually, I open the house up, get changed into the most comfortable clothes that I can find, and then head back down to the village, where I buy stores such as patés and cheese, say ‘Bonjour’ to anyone that I recognize, and then head to the local Bar/Tabac to have a glass of wine and catch up on local news. 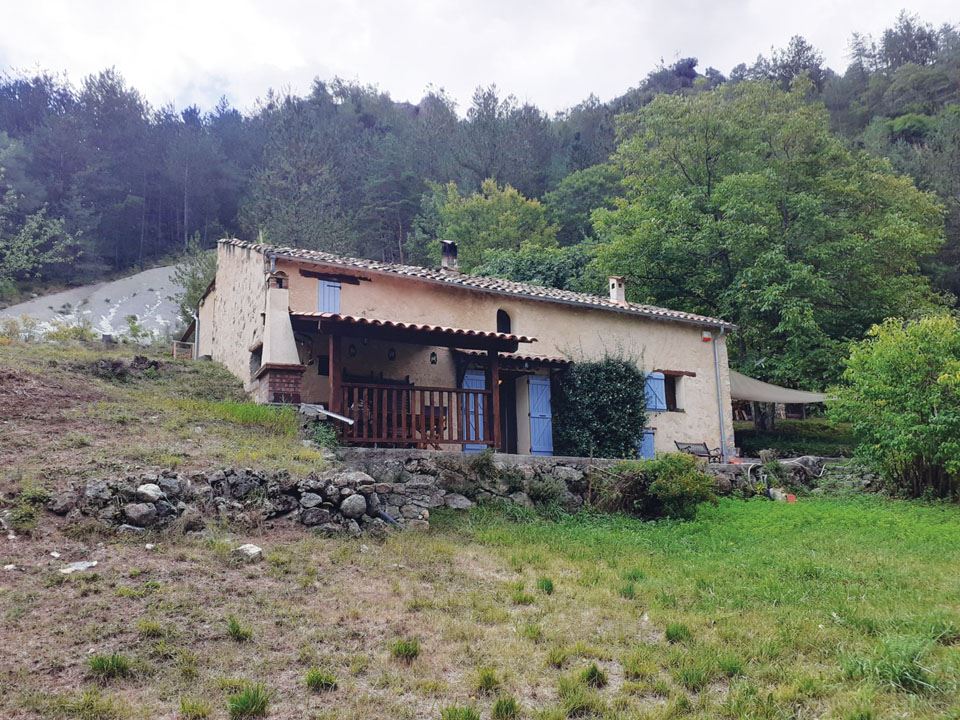 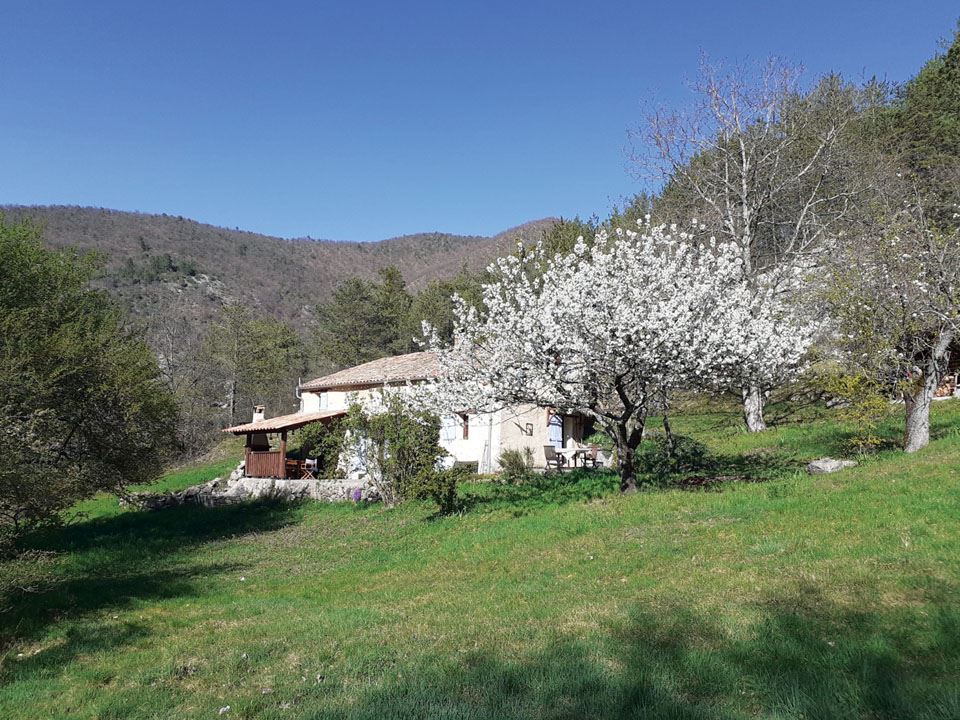 I usually find Jean-Claude, an ex-Legionnaire, propping up the bar, and for the price of a ‘grand rouge’, he will give me a relatively truthful account of what has been happening. Jean-Claude has never in living memory bought a single round of drinks, not even by accident, but he orders them from Colline, the pretty barkeep, very well. After the coast of Provence, the hinterland can be very surprising. The wine costs €1-50 for a large glass, while in Cannes or Monaco, you will pay €8, a beer on the coast is €7-50, while in Puget it is also €1-50. The people out in what is known as L’Arrière Pays, or back- country, are friendly and interested – often to the point of nosiness, while the coast is obviously much busier, and the people just want to get on with their day. After listening to a few of Jean- Claude’s more scandalous tales of what has been going on in the village, and filling his glass a few times, I often head over to the trout farm, where I buy a couple of fish for my evening barbecue. I do have a stream at the bottom of my land, and I have once, (in 15 years!) caught a trout in it. I have tried fly, lure, worm, grasshopper, all to no avail, and the general opinion is that I am just a lousy fisherman, and that the single trout that I caught was mentally defective. Both observations are probably true.

The late summer evenings at my house are idyllic. I light the fire, open a bottle of wine, grill the fish, and listen to the silence from my patio. 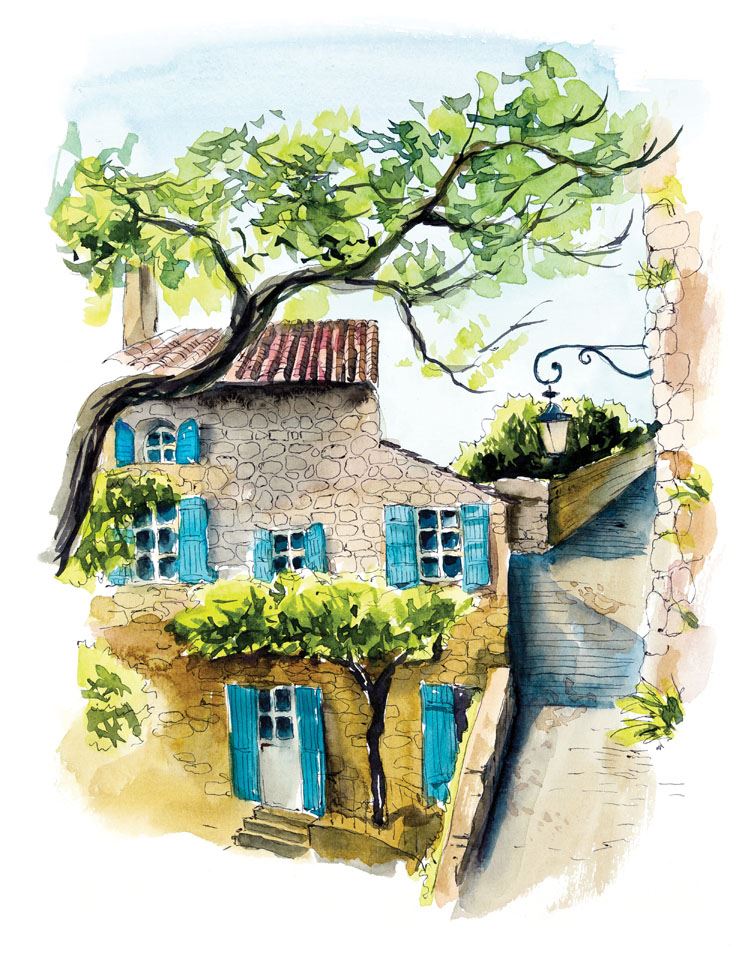 It really has been a wonderful way to spend my last years of running yachts.