The Balance Sheet of Life

I was last at the Pig Shed Trust’s Biddenfield farm 3 years ago, and told the tale in an earlier Berthon Book. Run by Harvey and Amanda Jones, I was promised butterflies, and wow did Biddenfield deliver. Masses of them including the silver washed fritillary butterfly in swathes. I was amazed at the time by the profusion of wildlife everywhere on this 400 acre farm which is managed for the wildlife and to preserve and encourage all native species whether crawling, flying, swimming, growing or running, not to be useful to human kind, but just to be. Nowhere since the great enclosure have they been so welcome. 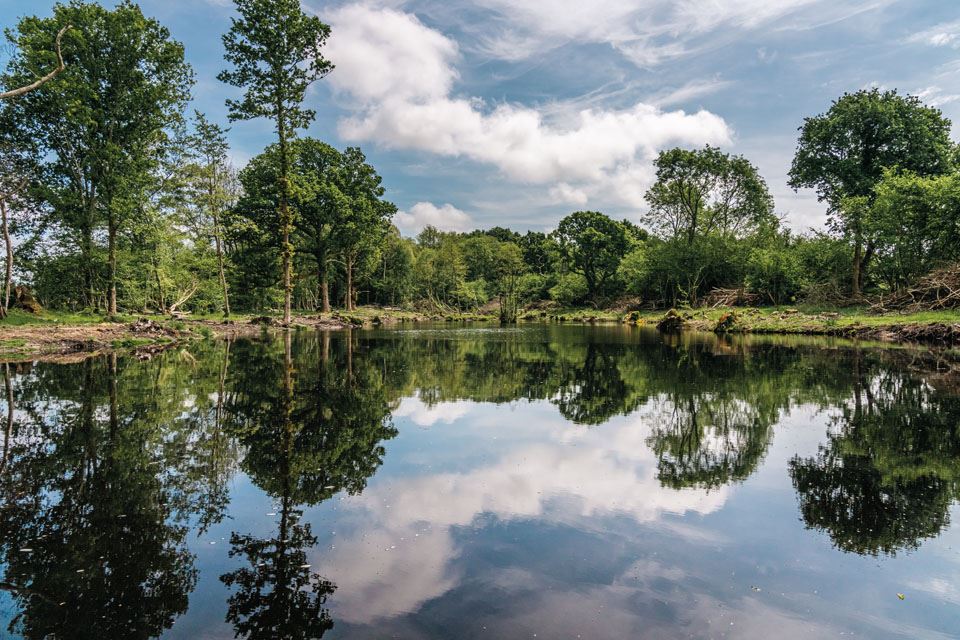 In the interim, Biddenfield has expanded with the addition of a further 100 acres from a nearby farm whose main parcel was sold for building and the Trust also acquired another farm – South Holt, bringing the total acreage managed by them to a vast 1,250 acres. All this means that Harvey and Amanda have a lot on bringing these lovely places back to their natural state and moving them from farm to sanctuary.

Asking about developments, I just knew that Harvey and Amanda would have branched out from butterflies. When I asked, I was airily told to come and have a look at their new barn, a few ponds and Ted the Percheron heavy horse. Harry our photographer and I bombed over to gather the griff, and we were not disappointed. 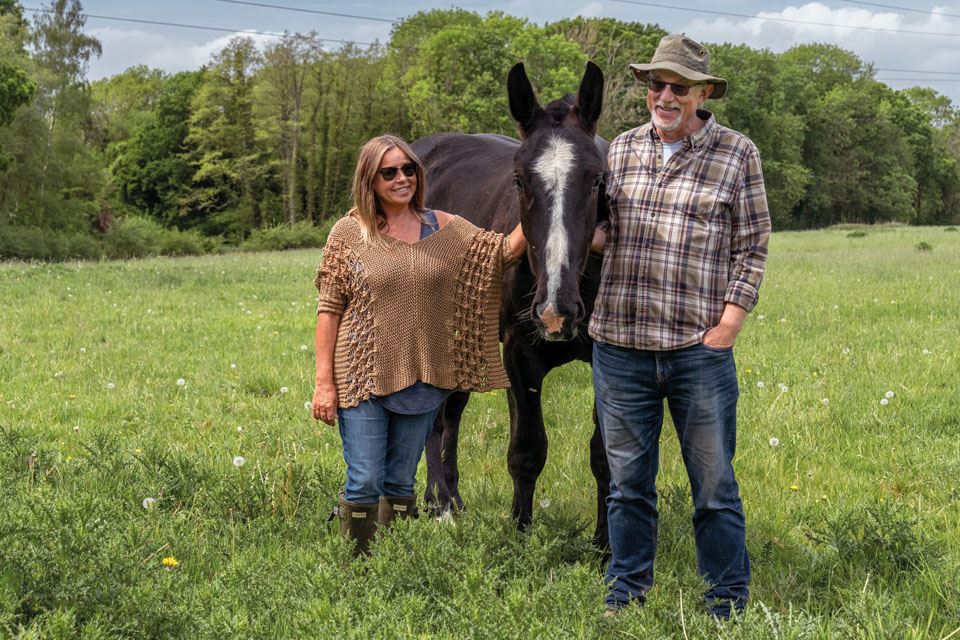 AMANDA AND HARVEY JONES WITH TED

When Harvey said Barn, I was not expecting the full restoration of a threshing barn built in the 1800s at the time of the Napoleonic wars. It was disassembled, moved and reassembled close to the farmhouse and surrounding buildings. I was also not expecting something quite so beautiful, with its ancient wooden structure preserved and with new wood let in where time and neglect had damaged it, and with a beautiful new structure fashioned around it, with lovely roof tiles. Soon it will have a wooden floor in the centre just as it would have been in the beginning for the threshing of the grain in the winter, with flagstones left and right. Like everything at Biddenfield, it has not been restored to make offices, or another house, or a games room, but simply so that it can be. 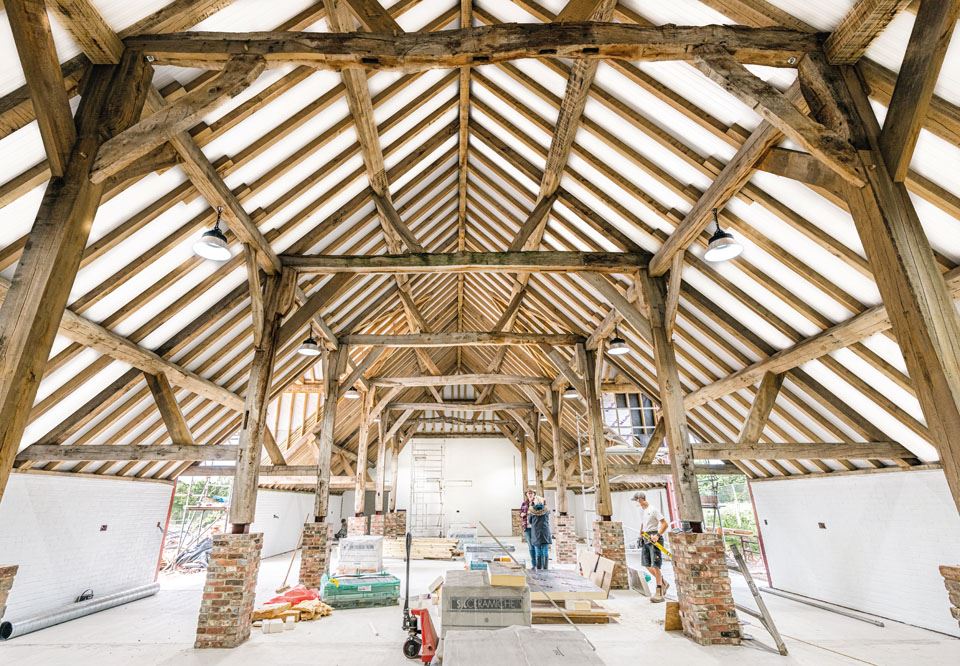 Hopping aboard Harvey and Amanda’s trusty chariot – the 4 wheel drive jeep, we hurtled off into the depths of the glory that is Biddenfield in late spring, to see the ponds. The few ponds are in fact 30, and they have been dug over the past 3 years by Harvey, Mick and Pete, with the help of Bevis the digger named after a legendary local giant who was big on tumuli – earth mounds to you and I, and Biggus Diggus. H is 15 metre span is great for digging ponds without getting stuck, except sometimes! He was lent his name of course, by the wonderful Life Of Brian. 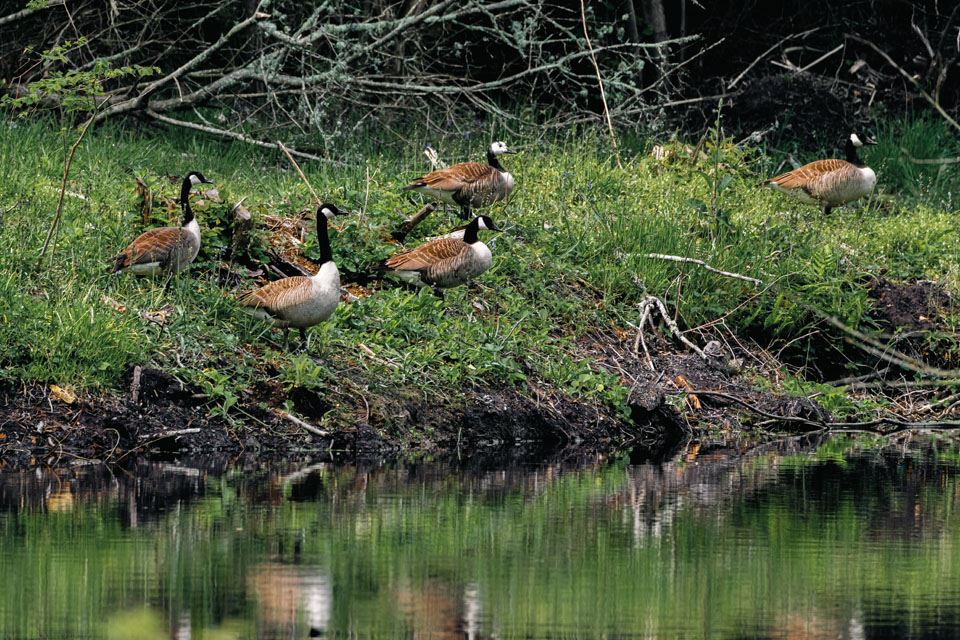 GEESE BY THE MICKSMERE POND

First stop was to the biggest of the ponds. All the ponds have names and this was Micksmere for reasons that you will well understand. A silted up duck shooting pond from long ago, with an ancient manmade dam, the trees growing out of it were cut down, water drained and the trunks used as a bridge for Biggus Diggus and Mick to cross to remove the anaerobic and very smelly plant matter full of swamp gas, and then to extend its size. Dam repaired and exit Biggus Diggus stage left, and Mother Nature has done the rest. I have never seen tadpoles so large and in such profusion, dragonflies, geese, wild flowers and a cacophony of bird song. Like all the Bevis, Biggus Diggus ponds, there are many deliberate edges, all of which provide more habitat for the wildlife that will call it home. 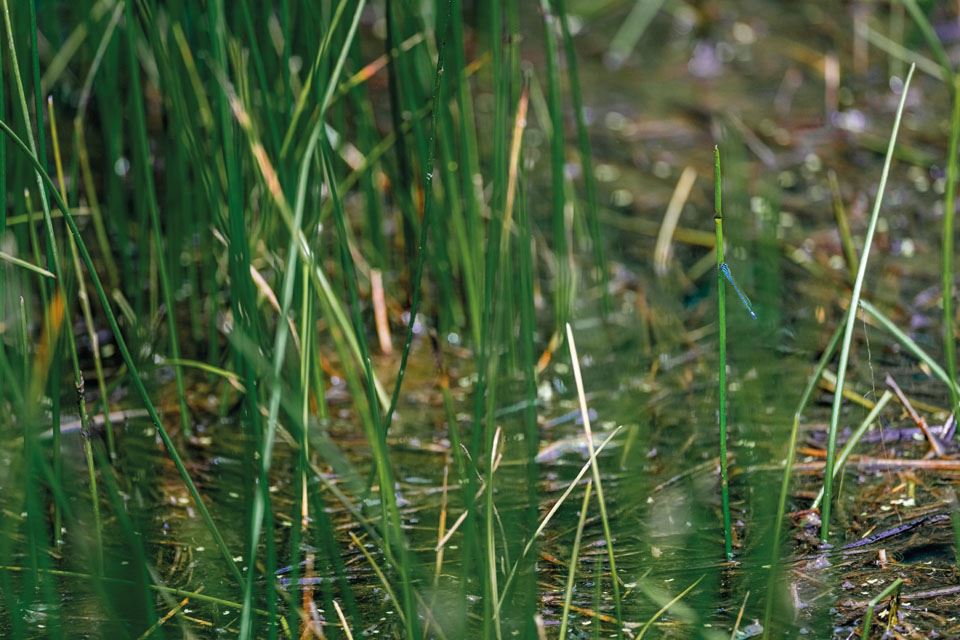 Next to Steve’s Pond, the first of the ponds dug by Steve – do what you can in a day, he was told. We stop in a field of brilliant yellow broom. No sign of any pond. Getting to it is a mission but once there the bulrushes, campion and dragonflies are epic. All around is the gentle aroma of wild garlic not far away. I keep asking who’s done the planting. Blank stares. This is what happens when you help nature and then leave her be. 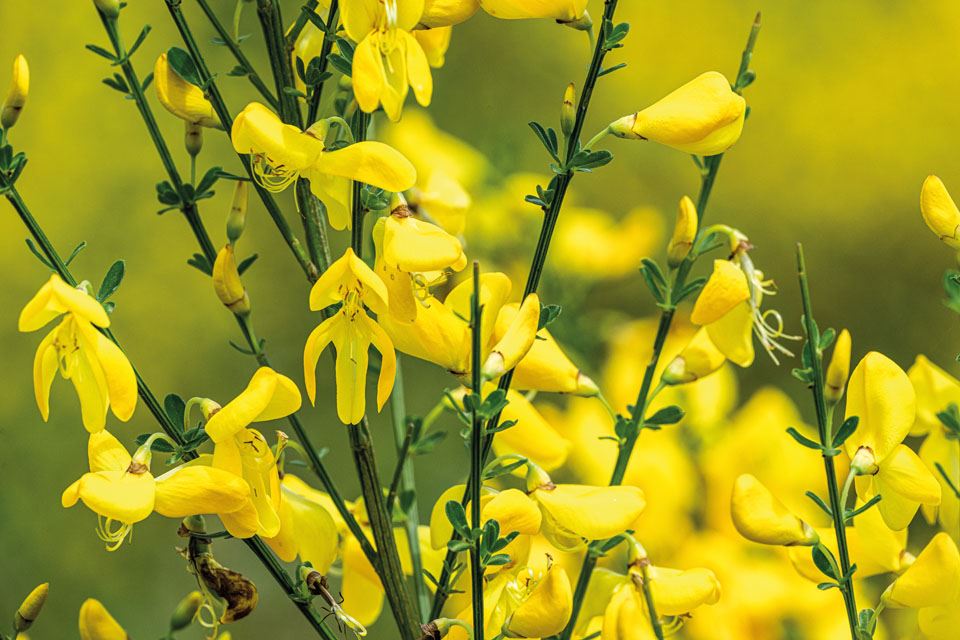 Whilst likening Biggus Diggus to the Aurochs of yore is a bit of a leap, you can imagine that they would have done similar damage to the landscape and provided new habitat and homes for wildlife way back then. 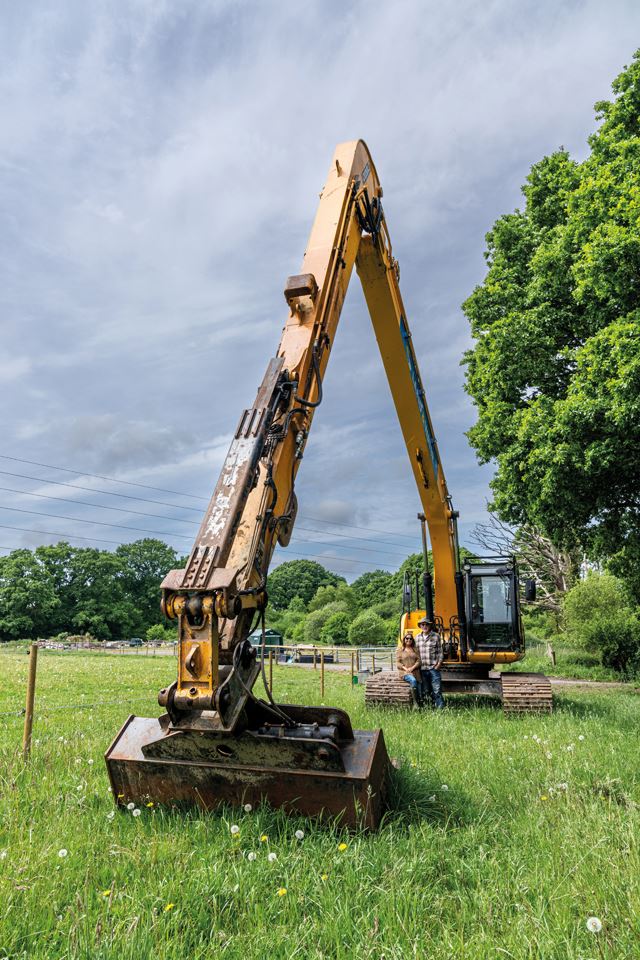 Next, it was time to meet the amazing Ted. A 3 year old Percheron who is being trained to help Harvey, Mick and Pete to haul stumps and the bush from pollarded trees without mechanical help or huge physical effort. 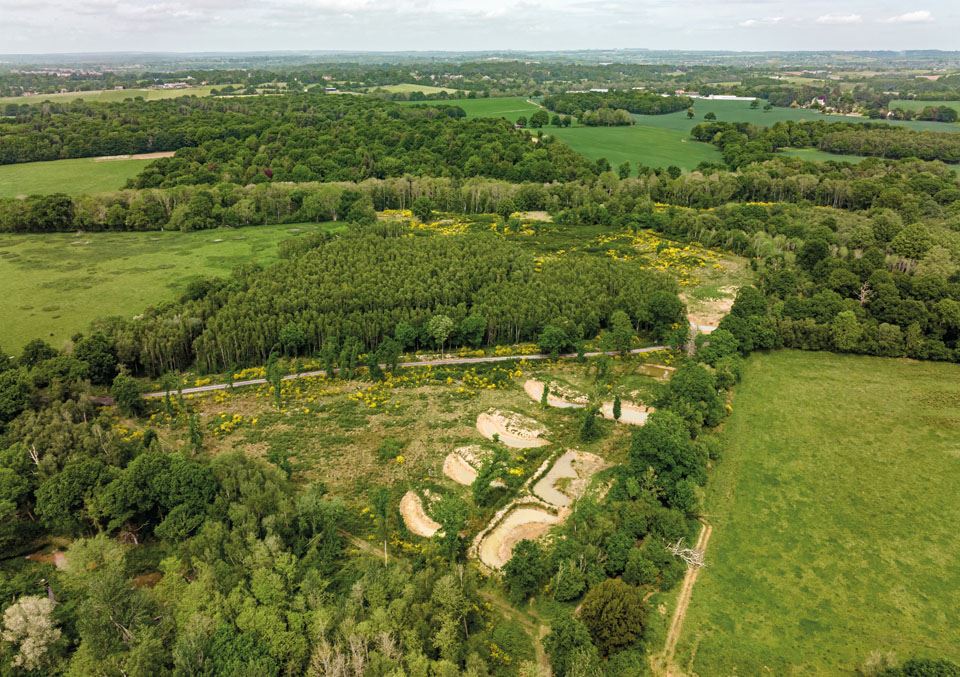 A SELECTION OF BIDDENFIELD’S PONDS FROM ABOVE

Ted and his 3 horse friends have the run of Biddenfield, sharing it only with the 20 cattle – expanded from my last visit with the British Whites joined by Shetland cattle, whose homeland has conditions so extreme that they are very tough. So, 500 acres, 4 horses, 20 cows…yet the profusion of life all around means that it is far from empty – quite to the contrary, it is teaming with life.

Another series of ponds of all shapes, sizes and depths, beckons. Some connected to streams and others not. All look different, and all are filled with activity and life. Biggus Diggus and his chums have not run riot, they are all deliberate excavations that enhance diversity and mean more wildlife. 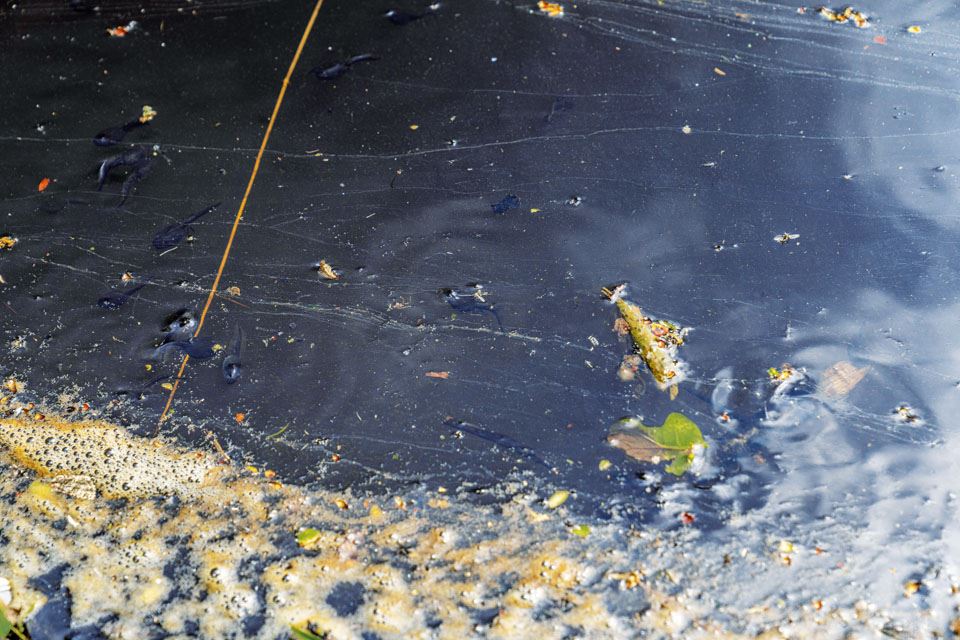 Whilst the work at Biddenfield continues, the importance of keeping count, and of enhancing P&L of wildlife is key to the Trust. Understanding the impact of the ponds, removal of non-native species, pollarding and leaving be is having, has meant a lot of research around the species and new species and their numbers. This is being constantly analysed and carefully catalogued.

A small example of this are the new Biddenfield acres that had previously been intensively farmed. Over the first year, in a recorded square of ground the headcount of earthworms grew from 1 to 55, exciting for Biddenfield as Harvey loves worms… 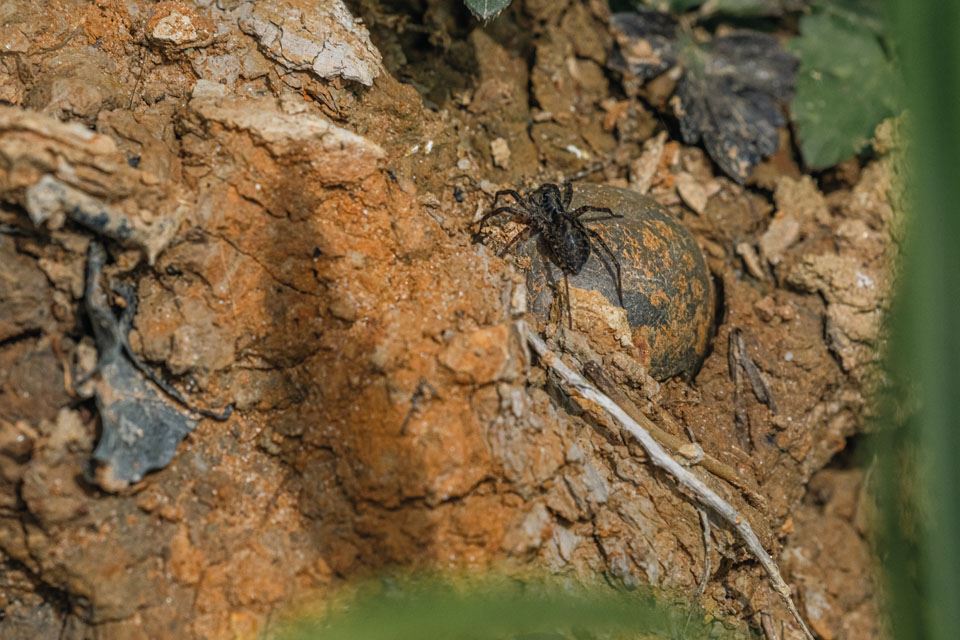 WOLF SPIDER – ONE OF 136 SPIDER SPECIES AT BIDDENFIELD

A simple thing but it demonstrates the point. For Harvey and Amanda the success of the Pig Shed Trust project is not measured in pounds and pence. Here the balance sheet is comprised of numbers and profusion of species whether animal or vegetable, and the Trust’s ability to continue to grow the diversity of life in this special place.

As for South Holt, another big project with a massive tree fell underway to remove diseased spruce and ash that would destroy the ancient woodlands on these lands. Contentious yes, but the right thing for the balance sheet of life. As with all successful endeavours to get the right result you, must as Harvey says, do whatever it takes… 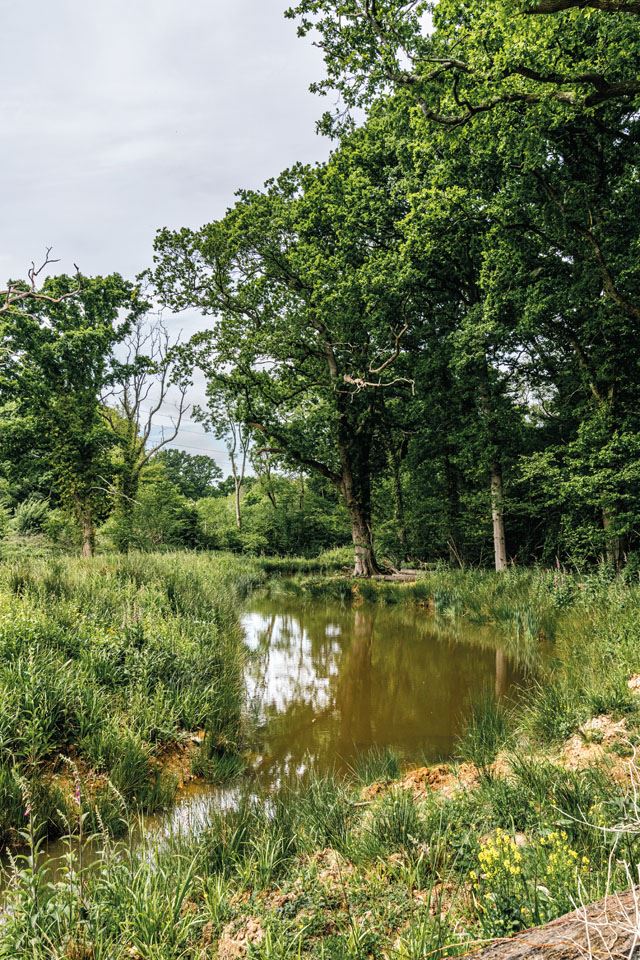