The Magical F1 Circus that is the Monaco Grand Prix

For many locals, the Monaco F1 Grand Prix season starts in March. If one is fortunate enough (or unfortunate depending on one’s view of the sport) to live in an apartment overlooking the track, March is when you need to apply to the Automobile Club of Monaco (www.acm.mc) for a pass for you and each member of your family to be able to leave and enter your flat on race days. Failure to produce the right document on race weekend and you will not be able get home during the race days so this is an important early step. Equally depending on the location of your flat, you may or may not be allowed to enter or leave your garage. If you can leave, you will also need one of those for your scooter, car etc as many of the roads around the track are also subject to restrictions. 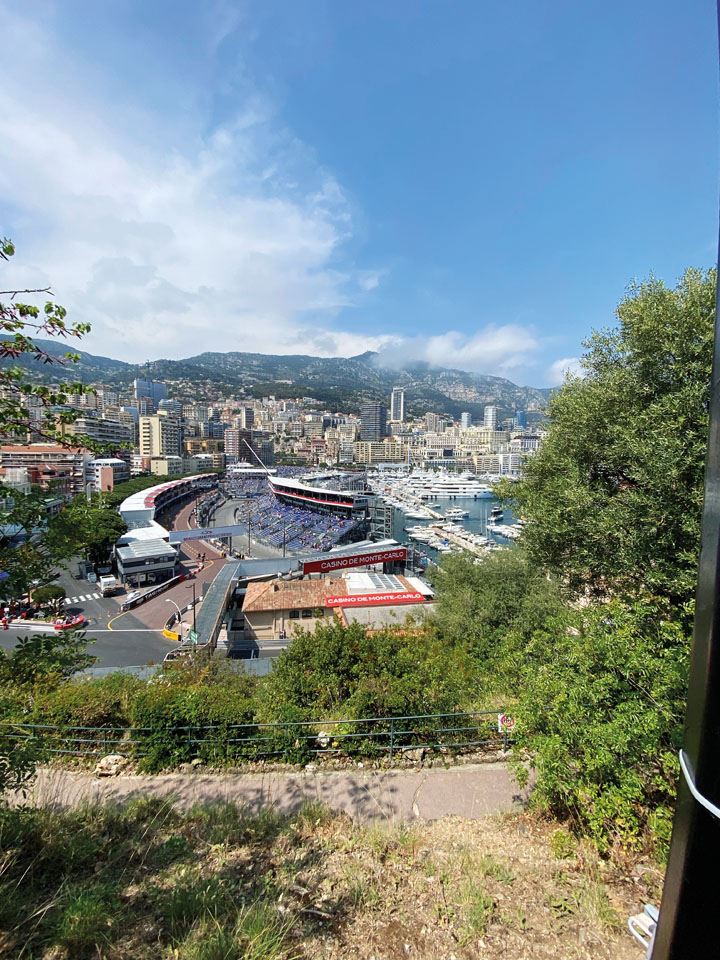 If you are welcoming visitors to your flat, they are also subject to strict rules during the race weekend, and so you must apply for tickets for each one of them at the same time as the other passes. Numbers are strictly limited to two people per linear meter of balcony overlooking the track! No more, no less. And don’t expect to be able to cheat as security is present during the race weekend, checking all comings and goings!

For the locals, this means plenty of planning from March onwards. 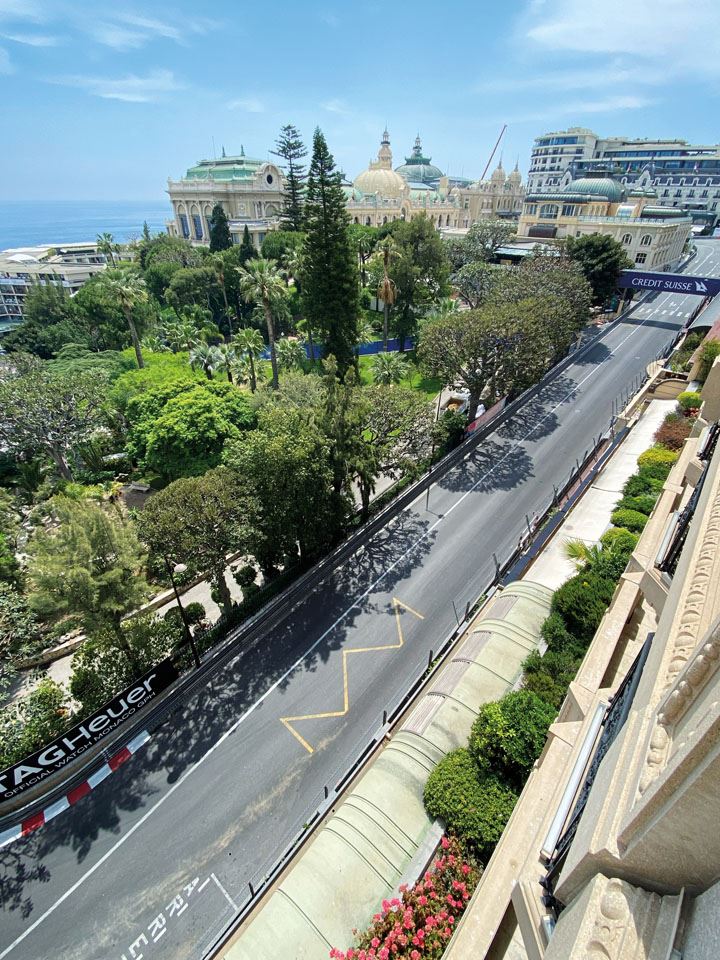 From the end of March the principality gradually gets a nightly makeover. Every night, a little bit more of normal urban life is removed and a little bit more of racetrack appears. In early April, the roads forming the racetrack are resurfaced. This means all habitual white lines and other highway markings disappear one night at a time. At the same time, highway signs are gradually removed to be replaced with bare minimum signage as the permanent road signs get in the way of the Armco safety barrier fencing. If you ever walk around Monaco, you will see that no signage is concreted in and each sign is simply inserted into road and pavement sockets. You will also notice in the pavement that every six feet, there is a 2 inch by 6 inch ACM manhole which in fact is a permanently hidden socket for all the Armco racing barrier posts.

For us locals, the absence of road markings such as stop, give way signs, lanes or even where to park is no big deal as we know where we should stop, give way or park. But for tourists and others, one can often see their blank face behind the wheel as they try and assimilate where to drive, park, turn or stop! 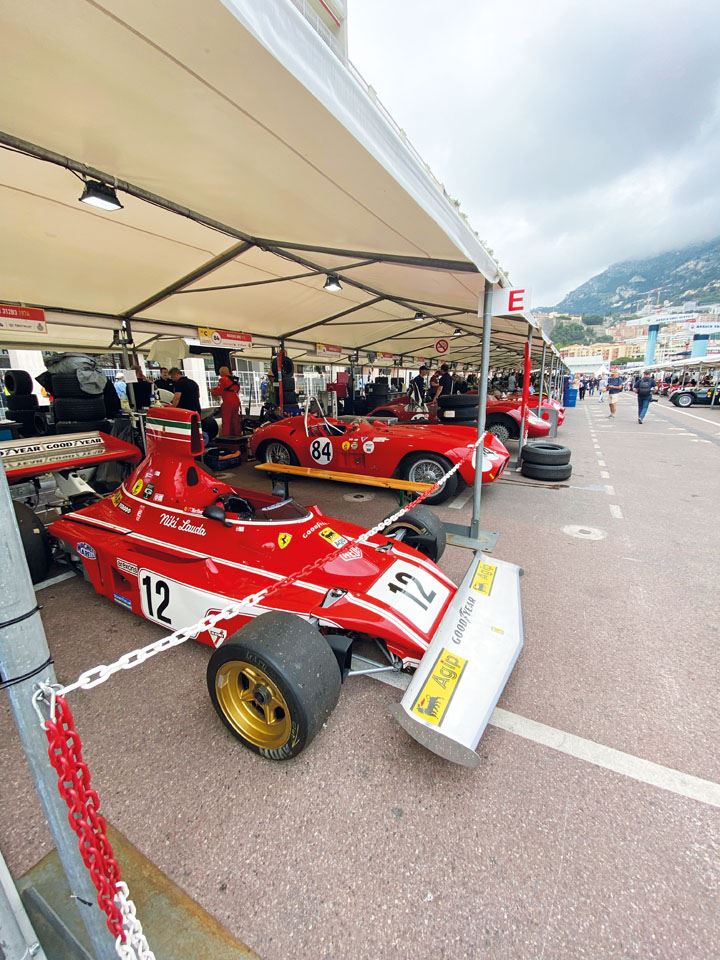 As the weeks progress, the track emerges. You can no longer cross the street where you want, and you end up looking for a temporary gap in the safety fencing to swap sides of the road. Gradually the 100,000 person stadium style seating emerges out of the ground (this must be one of the biggest annual scaffolding contracts in Europe!) and eventually all the F1 race technology gets installed alongside the huge screens which enable the fans to watch replays from their track side seating. Finally, the red and white curbs get a fresh coat of paint and sponsors’ signage appears in all the camera important strategic places. Miles of cables have been laid discreetly at the edge of the parking by this time and temporary masts are installed to boost internet and telephony capacity throughout the principality. The entire race track becomes one impressive private WIFI hotspot!

By early to mid-May, we are racetrack ready! 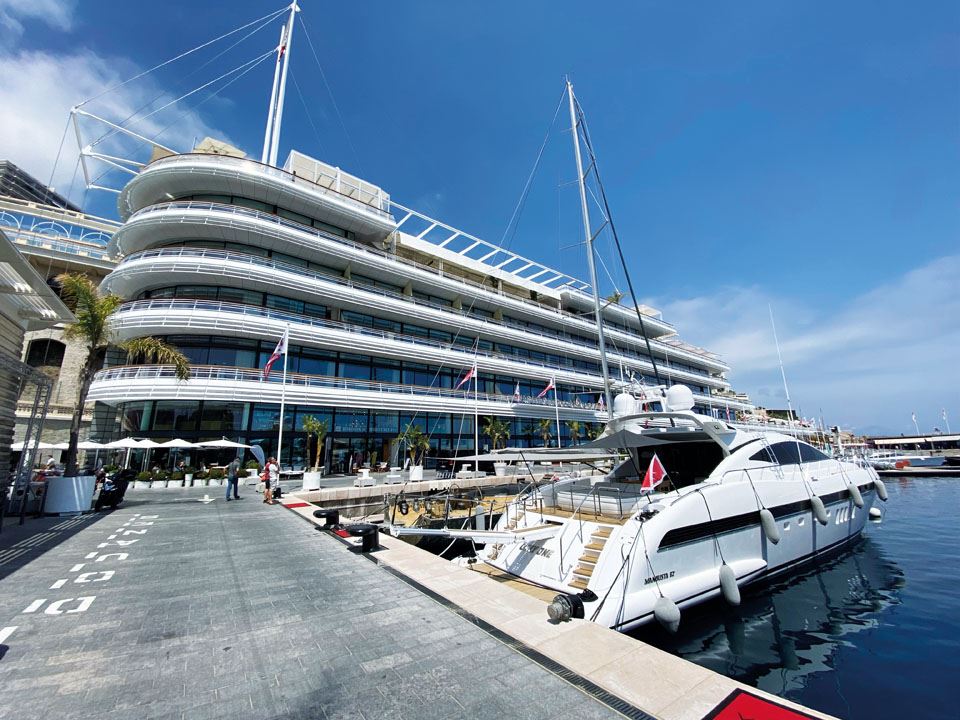 Once the track and fan infrastructure are installed, the teams and their sponsors appear. It is not unusual to see during the night 100 metre plus telescopic cranes park up on the road to lift sofas, TVs, bars, fridges and other party infrastructure, not to mention numerous palettes of wines or kegs of beer being lifted onto roof terraces which have been taken over by sponsors or teams.Only in Monaco do you see such huge cranes lifting such small items. But it is part of the folklore of Monaco!

From the Thursday to the Sunday of the race weekend, the roads are usually closed from 7am to 7pm to form the track and many of the surroundings are also subject to road traffic orders and restrictions. This means that you need to be organised to get your shopping done (or your escape planned) prior to the Thursday when it all starts. 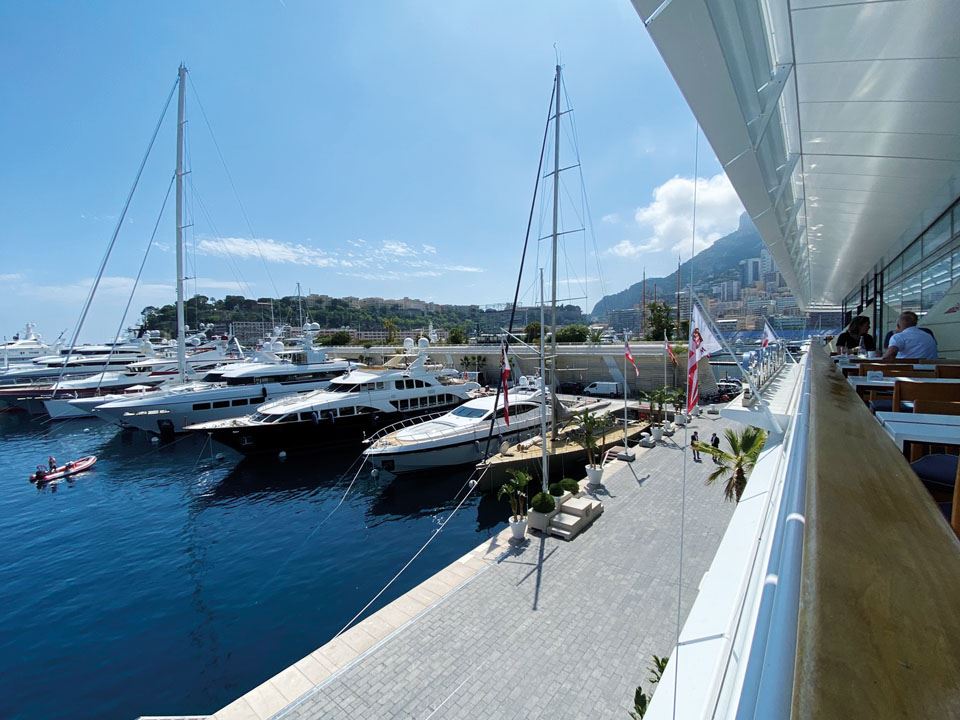 On Saturday and Sunday, the Monaco heliport cannot cope with the volume of helicopter traffic and the Fontvieille harbour wall is commandeered to add an additional 6 helicopter landing spots. Touch and go is de rigeuer; anyone however rich or famous cannot leave one’s helicopter in Monaco on that day. You come, you land, and you go!

As soon as the cars appear on the track, ear defenders come out. Even the Porsche Cup and the Formula 2 cars are intensively noisy. 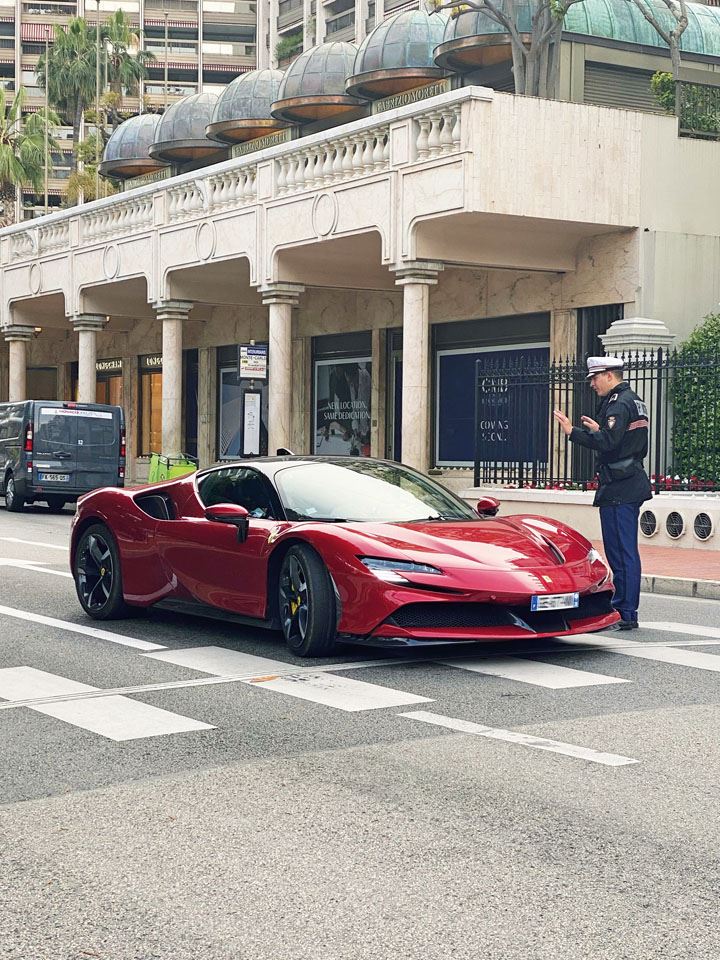 Similarly, harbour places in Port Hercules are at a premium. If you want to secure a berth for race weekend, best to apply six to nine months in advance. Berths are allocated first to teams and team sponsors and then the remaining berths are allocated on a first applied for basis. Local yachts are displaced into Fontvieille, Cap d’Ail or further afield to enable those fortunate enough to have a berth for the Grand Prix to move into their spot. Be there at the right time as some berths are locked out by a superyacht behind and beside you, so there is a real synchronised orchestra of movement to get everyone in the right place at the right time. Rumour has it that the Port Hercules achieves 50% of its annual turnover in just 4 days!

For those locals that decide to stay in town, during the four days of the race weekend, Monaco transforms itself into a village atmosphere. Street parties and gatherings are the norm and bars invade pavements and streets. Music and bands pop up as do souvenir sellers and merchandisers. Streets are pedestrianised and people flow from one area to the other. Most locals have favourite watering holes where they will gather during the four-day event. These gatherings feel no different to a local village fête where everyone knows everyone, even if you haven’t seen one another for a while! Don’t also be surprised if you find yourself drinking your pint next to a current or past F1 driver, rock star, sport legend or actor, as they are there like everyone else having a drink. The good news is that they won’t be served any faster than you because of their fame or fortune! 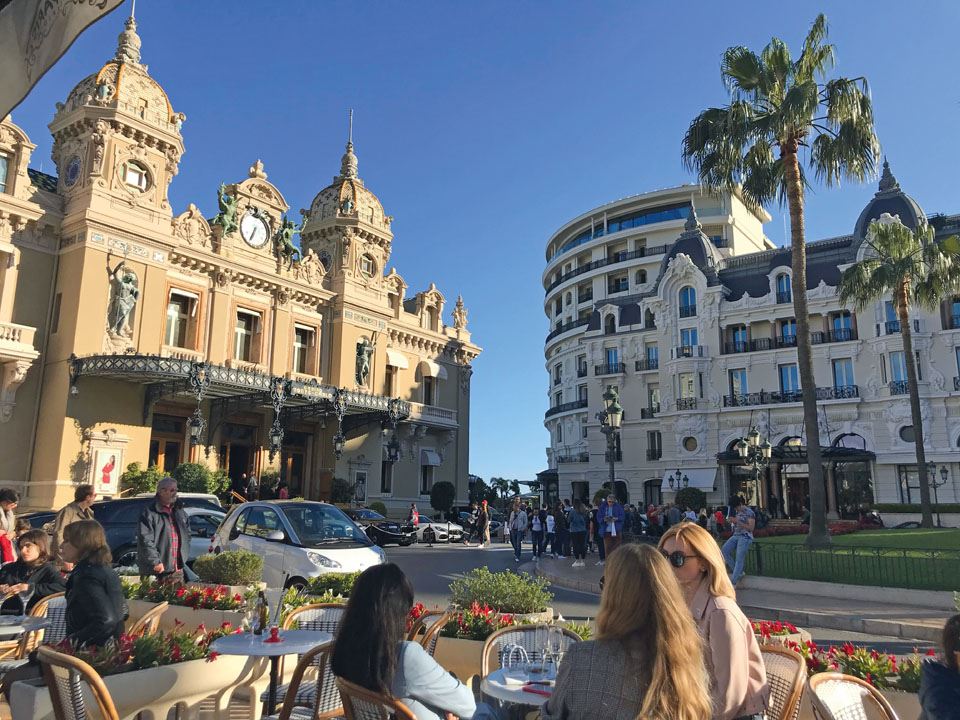 Saturday night is the PARTY night. It starts with a drinks reception hosted by their Serene Highnesses Prince Albert and Princess Charlene of Monaco. Thereafter people usually move towards the harbour to witness the awesome parties being staged on the superyachts on the central T dock opposite the swimming pool. Each yacht has a theme and sometimes they clash. Many years ago two adjacent yachts went for opposite themes. One was playing loud heavy metal music while the other had a classical pianist and ballerinas. Only in Monaco!

Living on the track does have its challenges. Cars start racing round the track from 7am to lay down the rubber for the Formula 1 cars. Don’t expect to be able to answer your phone at times as the sound (even with double glazing) makes it impossible to converse. Thank goodness for WhatsApp and emails! Just give up work and enjoy the circus. People watch, car watch and enjoy a glass of chilled rosé once the sun has gone over the yardarm! 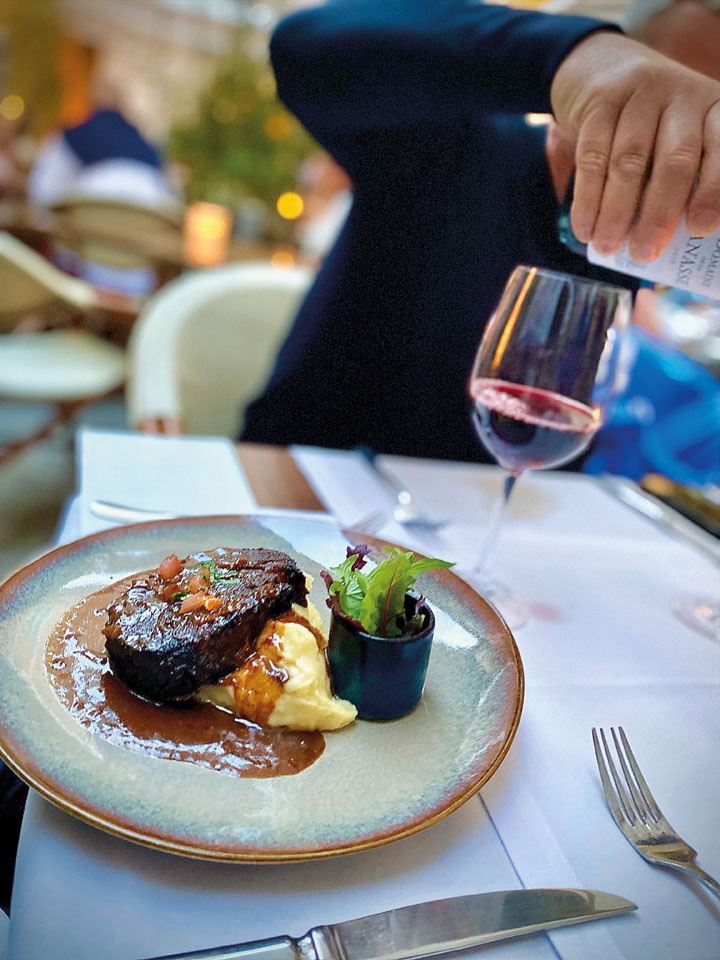 The Monaco Grand Prix experience is a magical F1 circus. As locals, we are privileged to watch this circus with all the celebrities and fans who come to Monaco, watch the racing, party hard and then disappear into the night! 8 to 10 weeks to build. 2 to 4 weeks to disappear as the Longine Horse show jumping competition moves into town as swiftly as the F1 cars have left the principality.

Whether you like it or loathe it, Monaco is a magical place during the Grand Prix weekend. It is worthy of an experience in a town that becomes not only a village but also one of the most coveted race tracks in the world. 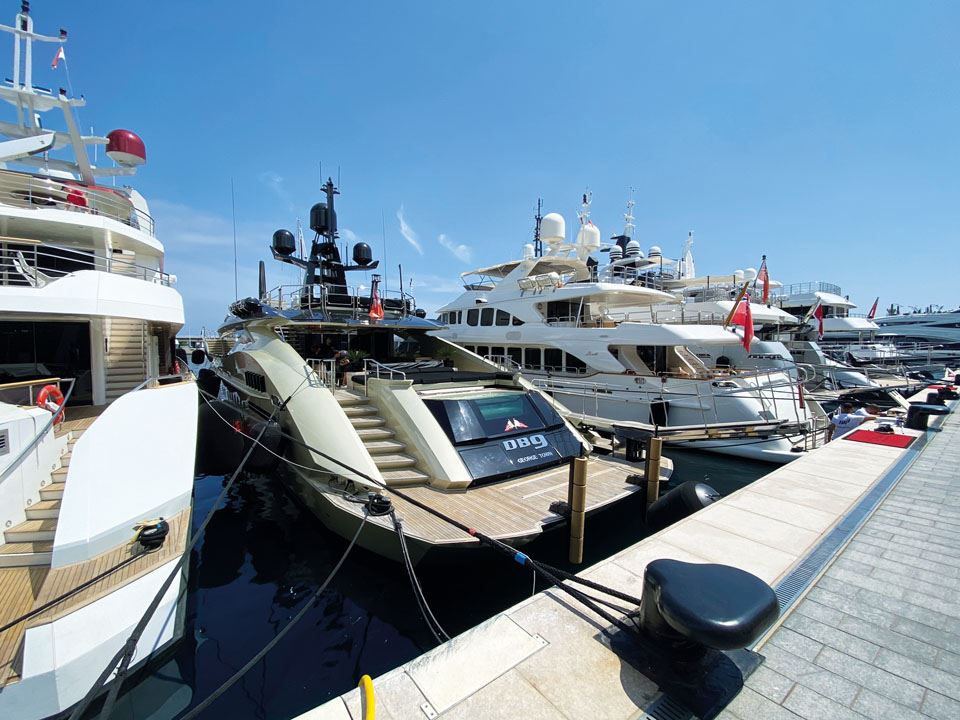 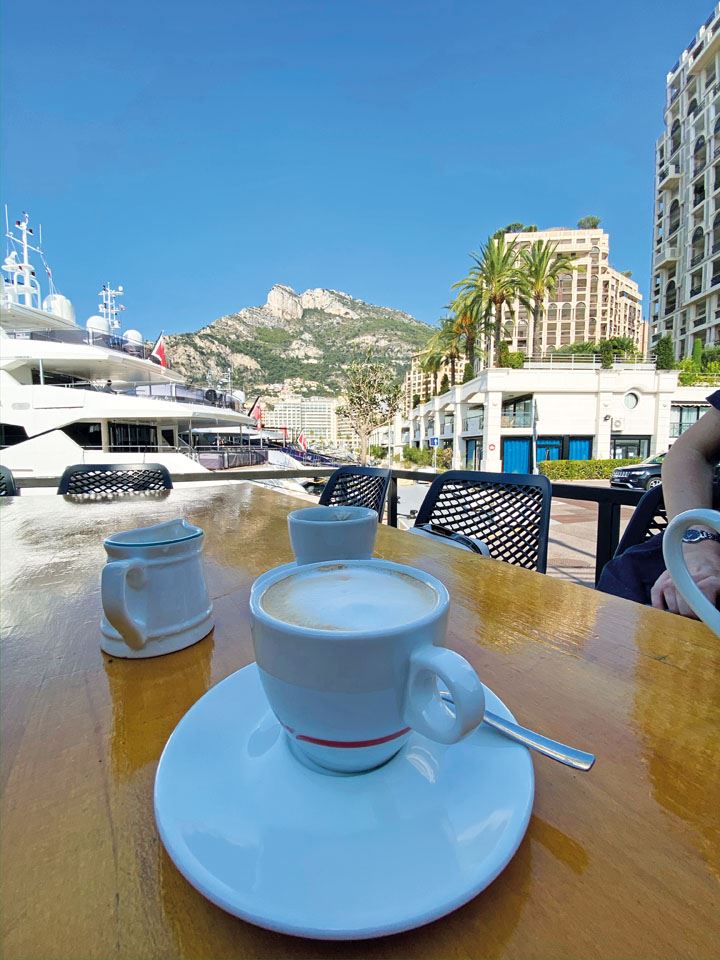