The stuff of fairytales – The Ice Hotel 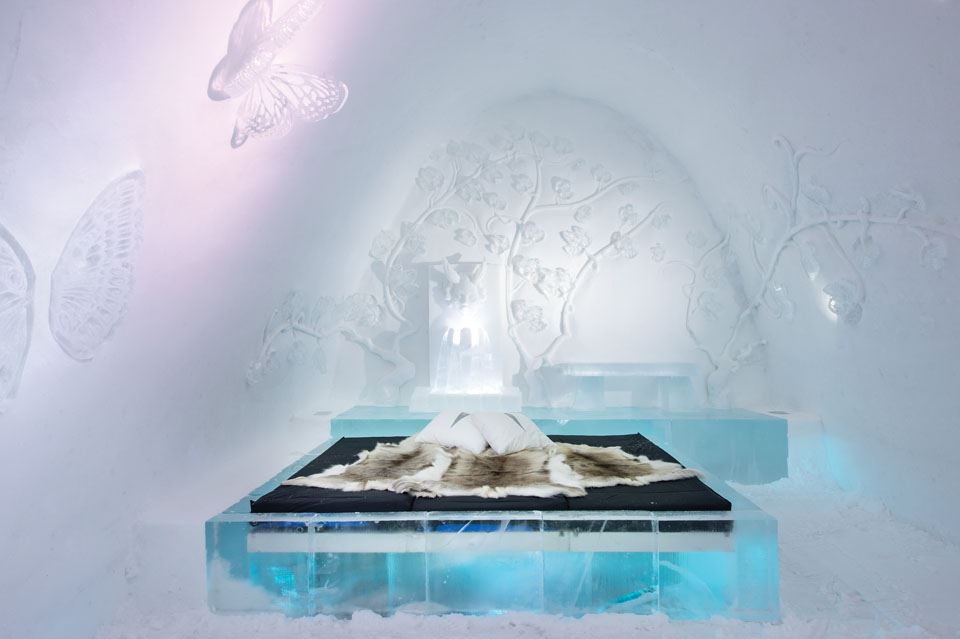 I have never visited this special place, but amongst friends and Berthon supporters there are those who have. Everyone who visits has a unique experience. Friend Mikael Holmqvist was married in the Ice Church, spending his first night of married life at the Ice Hotel. He and his wife have since visited in the summer and seen the River Torne flow past the site of the Ice Hotel with the promise of a new glistening structure yet to be fashioned from the frozen waters of the Torne. The Ice Hotel offers blocks of ice for beds, and for some of its visitors, the comfort of a permanent hotel close by. This provides the opportunity to experience this extraordinary place but then to return to the comfort of central heating and a warm bed thereafter.

The Ice Hotel travels. There are also Ice Bars, that have been seen around the world, and which are still found in Stockholm and in Jukkasjarvi where you drink from a glass of solid ice and the interior is made using nothing but ice from the River Torne.

From our UK office we learned of the Heald family, Swan 45′ owners, and of their recollections of their extraordinary visit to the Ice Hotel from Imogen who brings the experience to life beautifully. 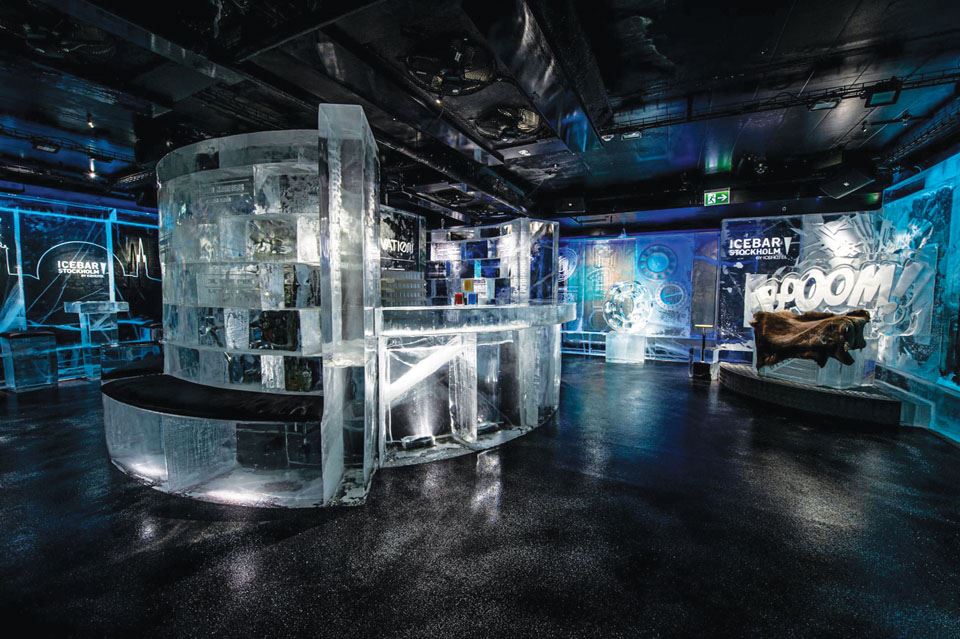 “If I told you that you could see the Northern lights from the highest peaks in the Arctic Circle, elks grazing by huge craters of abandoned copper mines and spend a night in an Ice Palace, you would of course think I was telling fairy tales!

From the moment we stepped off the plane to Kiruna, Sweden, the landscape was breathtaking. We travelled to Abisko, home of the Aurora Sky Station and checked into a lodge booked for us nearby. 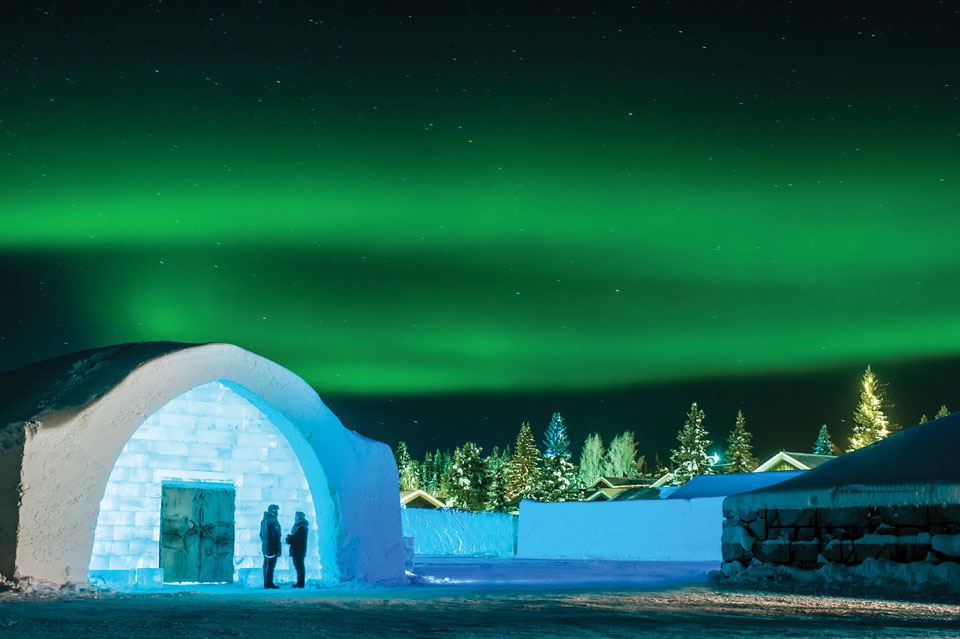 Before taking the 30 minute chair lift, we clambered into huge black suits over the top of our layers, and whilst now closely resembling Michelin men, we were thankful for the warmth provided by this unflattering garb. With hot drinks in hand, we were finally at the highest summit in Abisko National park. Once on the viewing deck we were able to see the magic of the sky. For us the aurora offered only a few grey wisps, but the sky station is the best place to see the Northern Lights in Sweden. This is weather dependant and like all fairy tales the magic of this natural phenomenon is not easily given up to all.

From there it was off to the frozen lake that is home to the Ice Hotel. Close by, there is an ice village that was truly the stuff of fairy tales, bustling with people and with Ice Hotel guests from across the globe, swelling the numbers and an infrastructure made of nothing but ice. 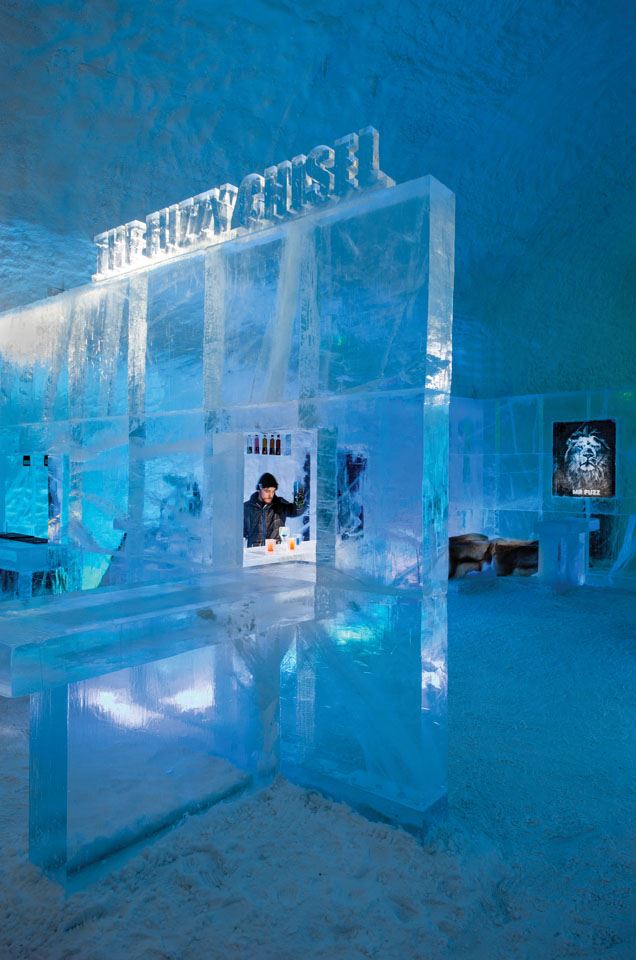 First stop – the Ice Bar, formed into a huge dome fabricated using an air balloon as a mould to create its extravagant shape. Once inside this crystallised cave, we drank from ice carved shot glasses filled with vodka and lingonberry juice.

The next fairy tale adventure was husky sledging. These iconic creatures pulled us through a landscape with swathes of pine trees and across open frozen lakes. Our final destination was a small tipi hidden between the trees. Inside, an elderly couple were boiling water over a small fire, and soon it was hot drinks all round. After our very cold huskie ride, to this day that drink still ranks as one of the best I’ve tasted – ever! With feeling returning to the tips of our fingers, it was back aboard the sledge for the return trip to the ice village. 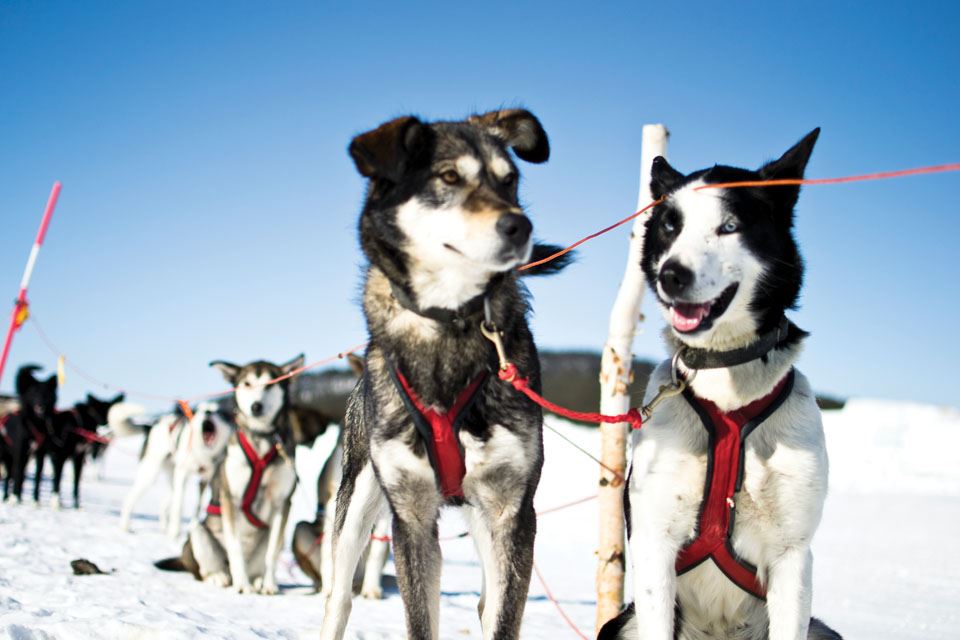 A word about the food….. like all good fairy tales, with only limited ingredients, the local chefs created magical local fare that tasted wonderful. I still remember the mushrooms that were found by the copper mines nearby. With the viciously bitter weather outside, they were heavenly. 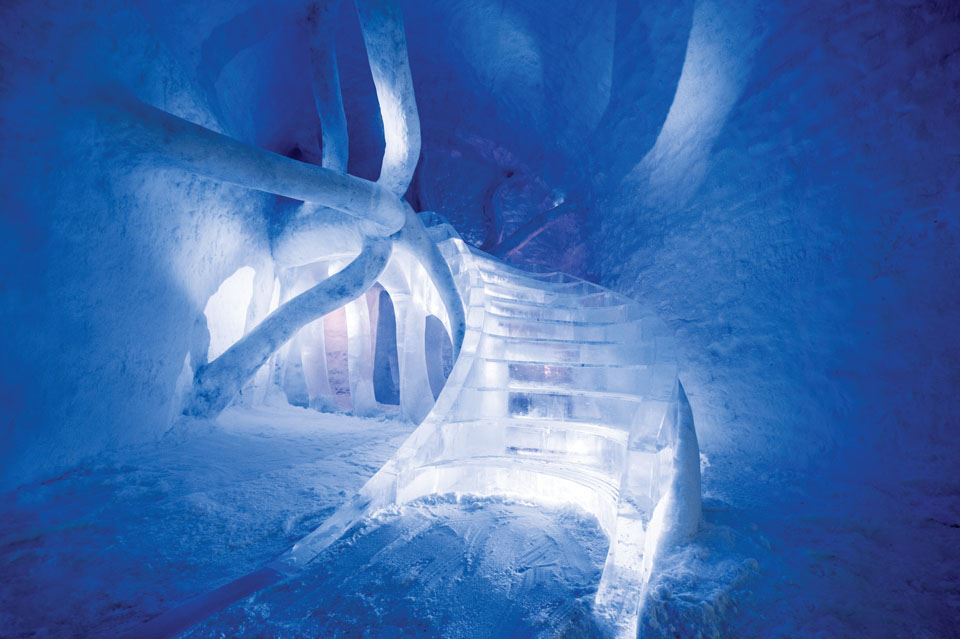 On our last day, as a birthday celebration for my mum, we took some Mini cars for a spin on a nearby frozen lake. Not yet a driver, I had the fun of flitting between my parents’ cars. My mother took the sensible tack, approaching the track carefully, skidding and sliding around the curves. My father, on the other hand, decided to snowplough into the track’s banks at every opportunity. For the adrenaline junkies amongst us, this is definitely a must do on any visit to the Ice Hotel! 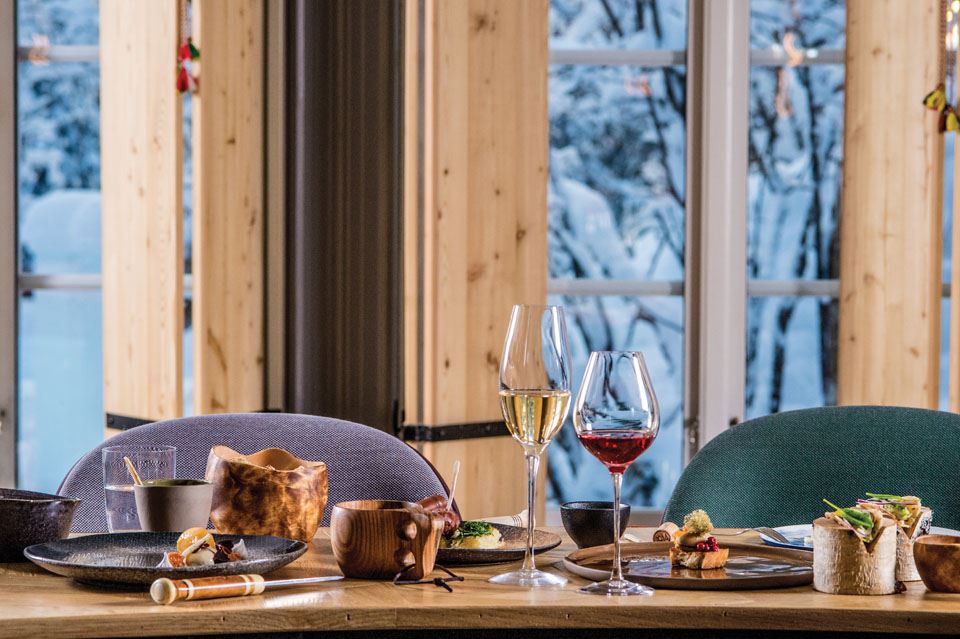 Beyond the Ice Village there are miles of fern woods and frozen lakes, but there is also a local town which is home to the Jukkasjärvi church, a beautiful clapboard building with fascinating Scandinavian relics and long gothic candle wicks; a reminder of an altogether simpler time. 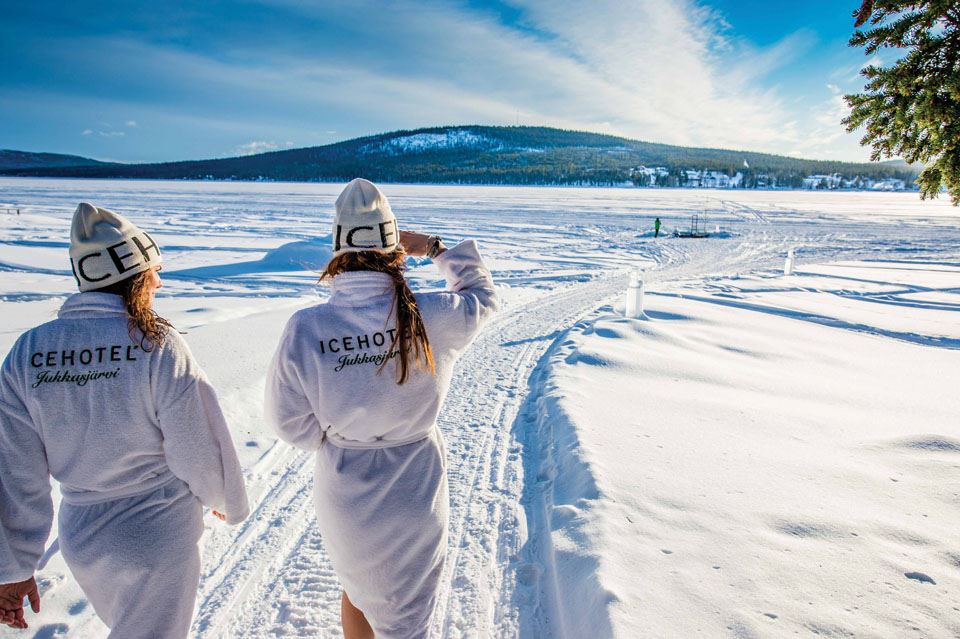 All this and what about the Ice Hotel? That evening we walked through its ice doors into a huge icicle carved into a chandelier. Over a thousand tons of crystal ice are used to create the foundations of the hotel every year. It really is an extraordinary technical undertaking that once completed, becomes one of the largest pieces of artwork on the planet. And remember, that it lasts only until the warmth of spring arrives, when it melts and returns to the River. 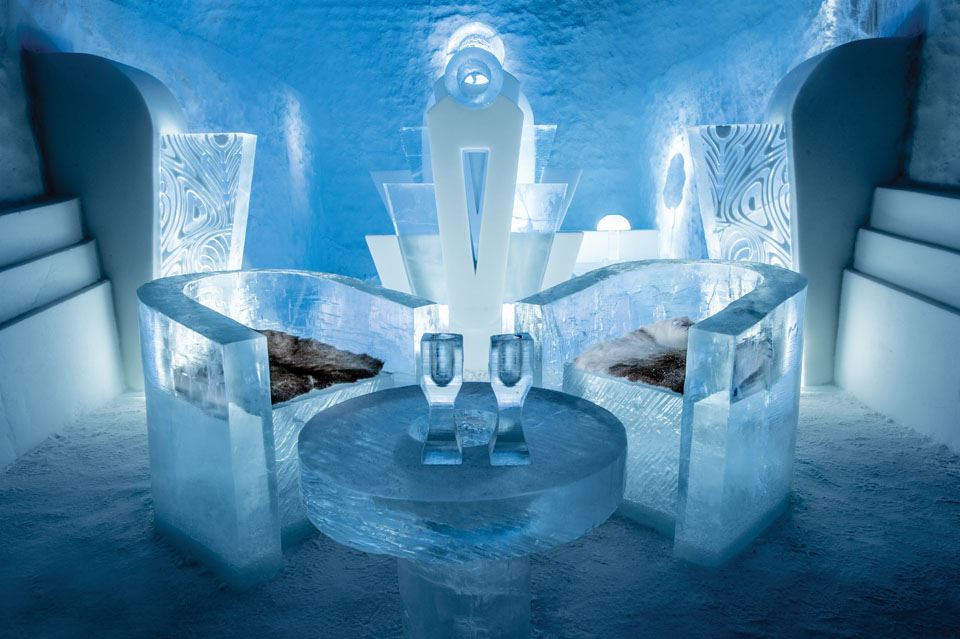 Many of the hotel rooms are designed by local designers. Our room for the night was designed by Emma Curden, Theodor Fahlen and Gabriella Buli, who created the room to resemble the inside of a watch, with cogs and dials carved into the sides of the domed walls. Superb as this was, I couldn’t help noticing that the beds are genuinely made of ice, with thick animal skins thrown over them! Of course, beds are for sleeping and we really needed the arctic sleeping bags, which kept us warm by retaining our body heat. Probably not the very best night’s sleep I’ve had in my life, but I was surprisingly comfy and warm on my ice block of a bed.

We awoke to steaming cups of hot lingonberry juice, which were very welcome! It was an unforgettable fairy tale experience, sleeping on ice and surrounded by the giant inner workings of a clock, amongst the bezels and minute hands all fabricated from solid ice. It seemed to me that maybe, Time himself stopped for us that night, for just a little while…” 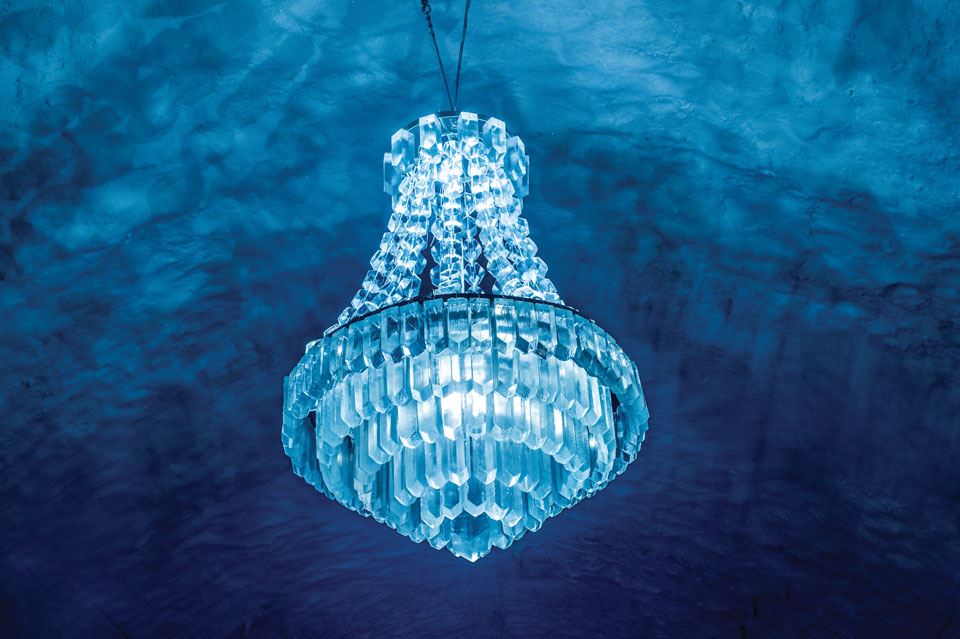 So, a magical place in my own country, and one that I plan to visit someday very soon. From the Northern Lights, to lingonberry juice, to huskies, the Ice Hotel is truly the stuff of fairy tales.