Through the lens of yachting photographer – Mark Lloyd

If you follow sailing events, browse sailing websites, read sailing magazines or follow sailing in the national press, the chances are high that you’ll have seen Mark Lloyd’s pictures before.

One of the world’s most renowned sailing photographers, the New Forest-based photographer has spent the last two decades documenting the sport’s most iconic moments.

From the cutting-edge America’s Cup monsters to the oceanmunching IMOCA 60s of the Vendee Globe, from the blisteringly quick SailGP foilers to traditional Olympic classes, Lloyd’s photos are unmistakable for their style, beauty and ability to perfectly capture moments in time. 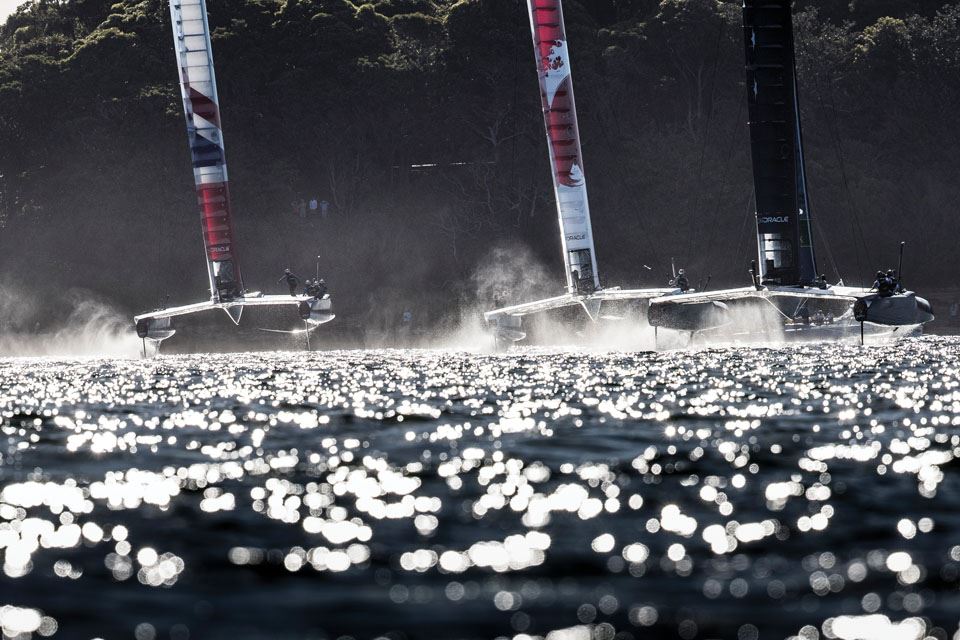 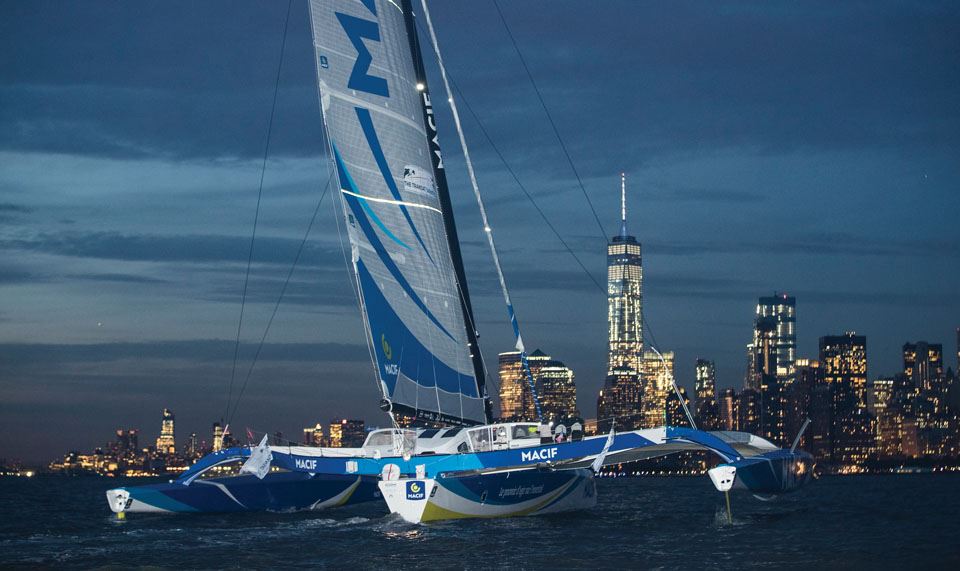 Like so many of the best lensmen, Lloyd cut his teeth in newspapers. A job working in the darkroom at legendary East Midlands press agency Raymonds was followed by a stint in New York, covering events across the pond for the world’s media.

On his return, Lloyd freelanced for the national papers. A chance meeting during a shoot at Downing Street unexpectedly opened the door to the sailing world.

“I was on a shoot for the Daily Mail and while standing outside I met Mark Pepper and the team from BT Global Challenge,” Lloyd said. “We got chatting and clicked. A few weeks later he commissioned me to cover the homecoming of Mike Golding’s Group4 IMOCA and Ellen MacArthur’s Kingfisher following the Vendee Globe.”

“I knew I had to offer something that others weren’t doing at that time, so I shot it from a different angle. It was a pivotal moment for me – I got the shots and from there my career was established.” 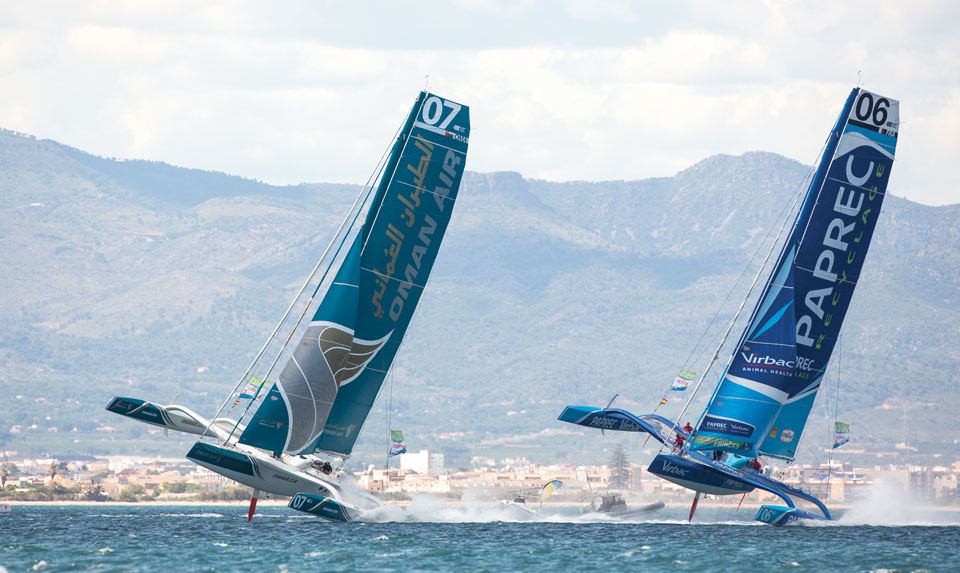 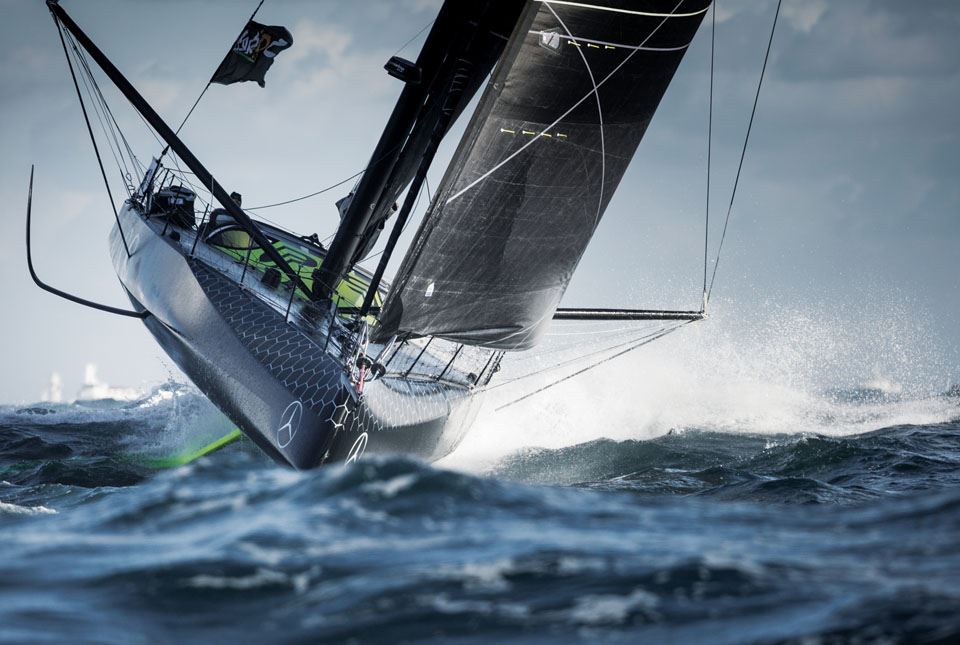 ALEX THOMSON AT THE VENDEE GLOBE 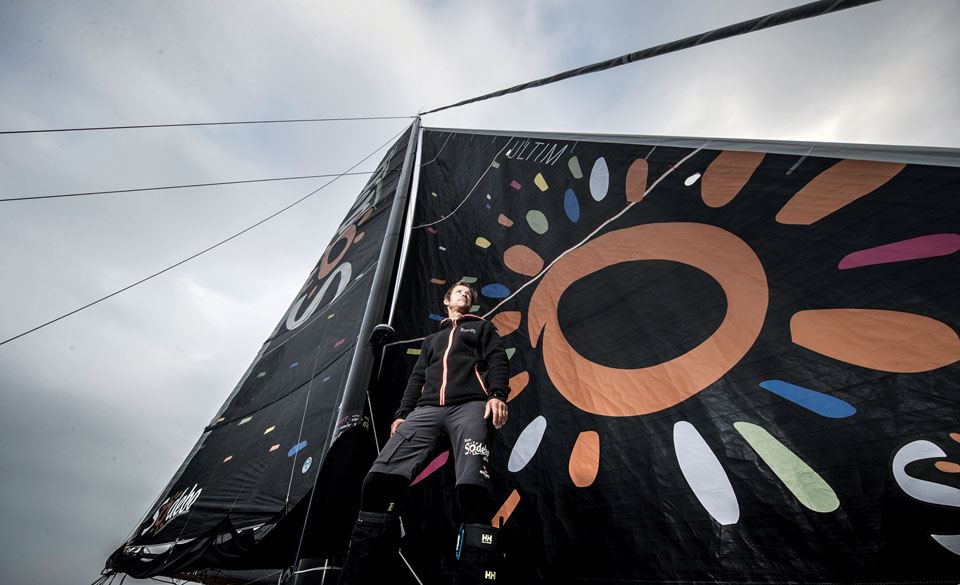 The combination of Lloyd’s technical wizardry combined with his creativity and can-do attitude soon made him the go-to guy for teams, events looking for something a bit different.

“I remember going sailing with [French offshore sailing legend] Loick Peyron, with me at the top of the mast railing around,” Lloyd recalls. “Then there was a shoot from this crazy Vietnam-style helicopter that the Omani government provided for us. The pilot didn’t speak any English and it was completely inappropriate for the task but so much fun – I think we almost blew Shirley Robertson over at one point.”

Among Lloyd’s most memorable images are those now-famous stunts from British round the world sailor Alex Thomson and his HUGO BOSS IMOCA 60.

First it was the Keel Walk. Sharply dressed in a Hugo Boss suit, Thomson filled the leeward water ballast tanks until his Open60 was heeled right over, then canted the huge swing keel in the opposite direction, lifting it clear from the water. With trademark cool, he sped up to the boat from a jetski, and sauntered out onto the orange keel blade.

Blasting alongside in a rib, Lloyd fired off shot after shot. The moment the pictures were released they went global.

With Lloyd’s input, the stunts got bigger, better and even more creative. When Thompson again heeled Hugo Boss over to 45 degrees and scampered along the 30-metre mast untethered, Lloyd was there to perfectly capture the feat and the ensuing swan dive. 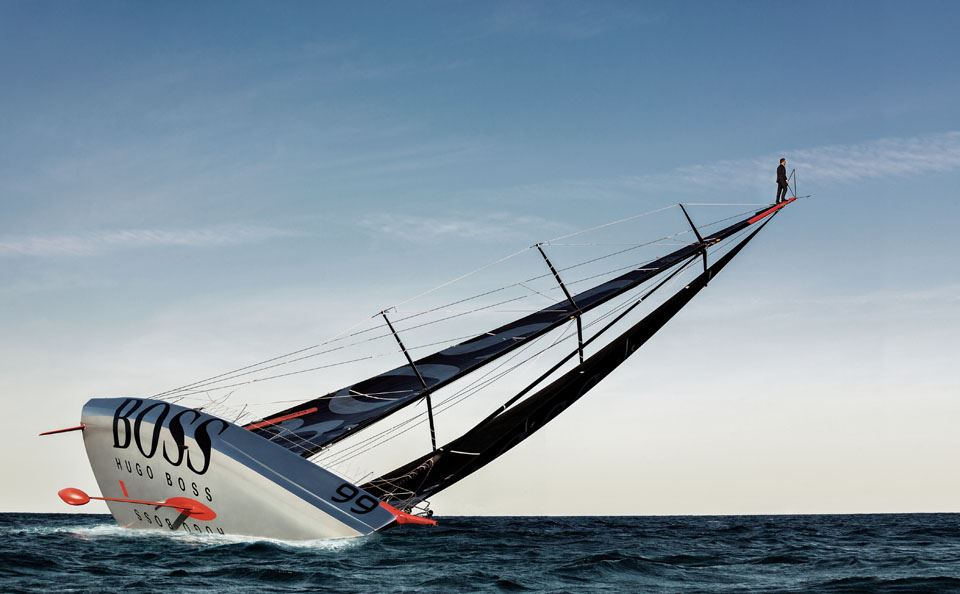 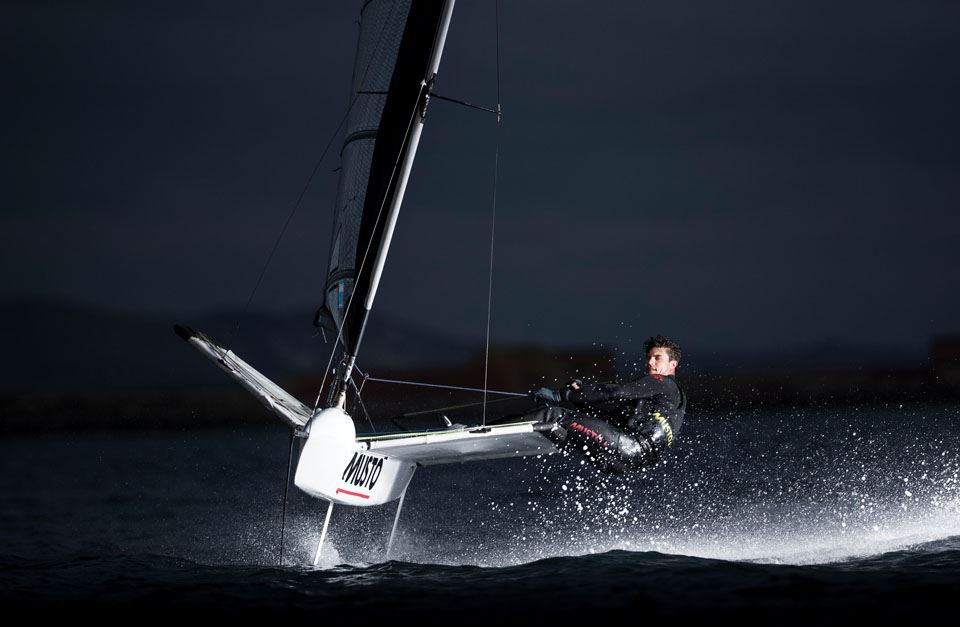 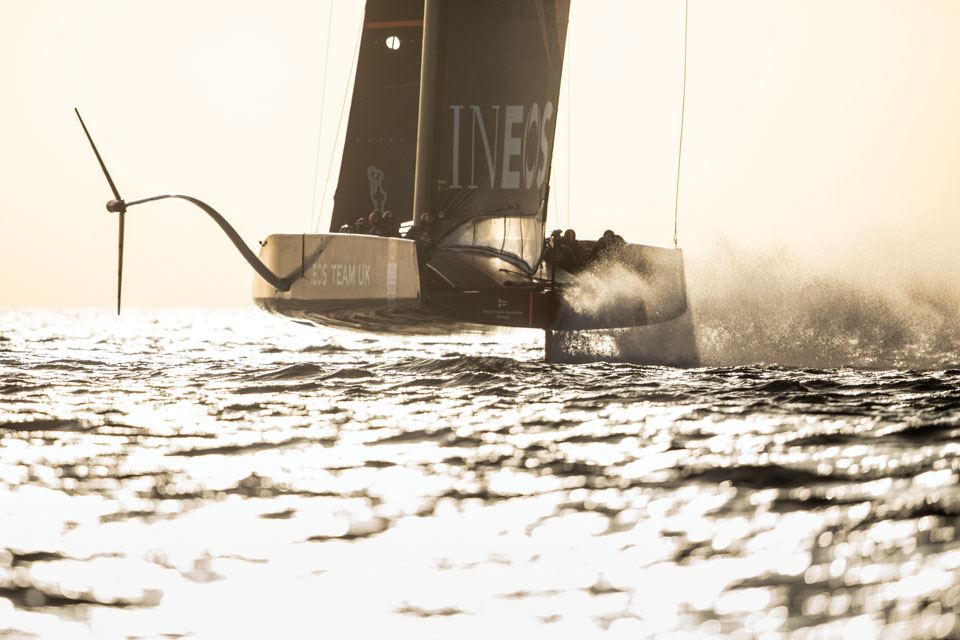 Just when it seemed there was no stunt that could top the Mast Walk, the Sky Walk was conceived. Thomson’s most daring and dangerous stunt involved him kitesurfing behind Hugo Boss until hitting a certain speed, then using his kite to catapult high above the boat before parachuting back down to the water.

Needless to say Lloyd nailed the pictures, and the world’s media duly ran them. When asked how he captured mind-blowing photos of the world’s fastest, most powerful racing yachts:

Before the Covid-19 pandemic struck, Lloyd was juggling shoots with Sir Ben Ainslie’s INEOS Team UK America’s Cup challengers at their training base in Cagliarai, Italy, with documenting the British oufit in the debut season of SailGP.

Both boats lift clear of the water on foils: Ainslie’s is a never-seenbefore ‘flying’ monohull while the SailGP GBR team use a turbocharged version of the 2017 America’s Cup cats. Both can hit speeds of almost 60mph.

When asked if you can describe what it’s like to shoot either of these high tech yachts “it’s like standing on the roof of your car at 50mph or snowboarding with a camera. The trust with either the team whilst you’re onboard, or the partnership with a chase boat driver also help make the pictures you see published. Beautiful to photograph, amazing fun, and I’m really lucky!” 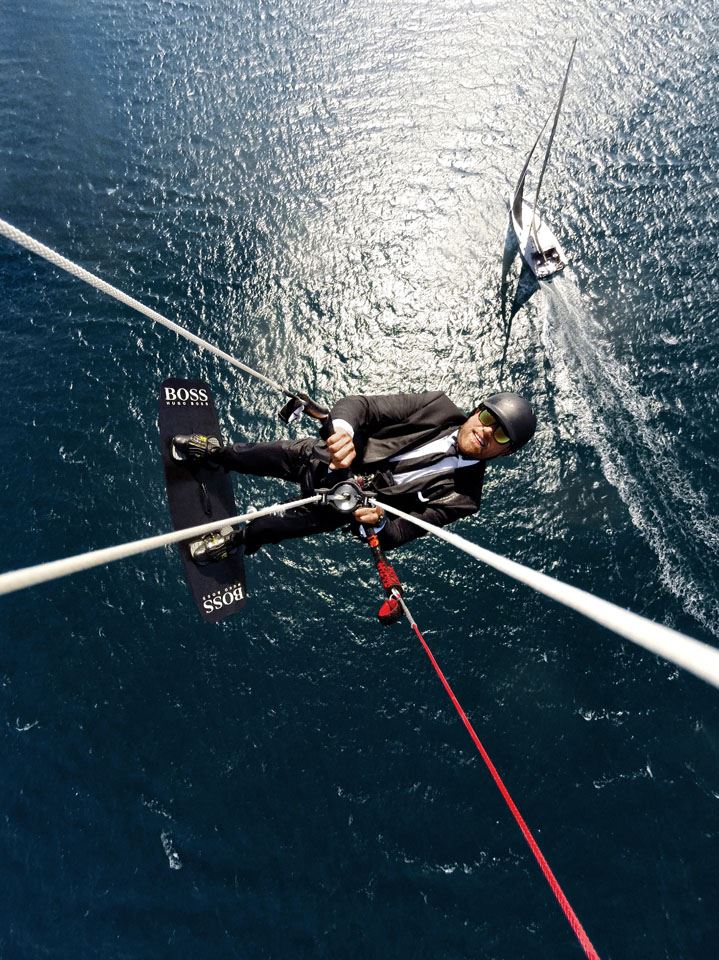