INTERIOR DESIGN FOR YACHTS and why it matters… 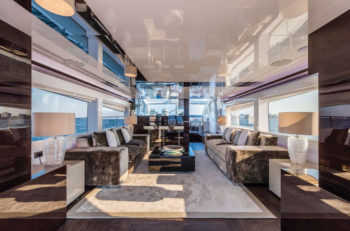 A sailing or motor yacht is a massively complex piece of equipment that has to be able to function effectively and safely in an environment which is hostile both in terms of the conditions that she finds herself in from time to time and also in terms of the corrosive damage that can be done to machinery in all that salty air.

Man’s early brushes with the sea were not always successful and most of the time the sea most definitely came off best! Gradually we have learnt to understand this incredible force and it remains the case today that a relaxed attitude to the sea and what it can do is not cool and having respect for its forces is absolutely necessary if you are to make old bones.

Against this backdrop the importance of function is very much at the fore. Yachting is a relatively recent sport in comparison to the lengths of time since man first stepped into first coracle (if that elaborate) and yacht designers and yachtsmen have always been very clear that it is not what the yacht is but what she does.

Of course we are reminded of the great leviathans of the sea produced by Fife and the like with their extraordinary and beautifully hand crafted interiors, but for lesser mortals, interior niceties were not really what counted. A half way dry bunk and protection from the elements was quite enough.

Design has developed and the advent of the production yacht in the 1960s (albeit that the forerunner of this idea was pioneered between the wars at Berthon with the Gauntlet class) meant that yachts were for families, more comfortable and designed to appeal, to a degree, to the whole family.

That said, double berths aboard yachts for anyone but the cheque writer weren’t really invented until the 1980s, and if you look at yachts both sail and power in production in the 1990s and early 2000s and examine their galleys, you will see immediately that many were designed by a team that never cooked, had no idea how the process worked and the only concession for the cook was a belt to enable them to be chained to the galley in a seaway to ensure that the sailors above were fed and watered – come what may!

The term traditional interior covers a multitude of sins. It normally means lazy design, to make the yacht designer and builders’ lives easier with no imagination or flair or idea of how to make the interior a nice space to be in.

Similarly, a lot of house building at the time was pretty shocking, although the excuse that introducing a modicum of style and panache would affect the yacht’s safety at sea is an easy out that was not available to the architects and house builders at the time. In addition, as many cruising families had limited experience out on the water it was an excuse that designers and builders got away with for far too long. Families buying houses were not putting up with this sort of rubbish, so good house interior design started to inform what we consider acceptable a long time before the yachting industry clocked-on.

Fortunately this has all changed. As with yachtsmen’s houses, cars or planes, they now expect a yacht’s interior to reflect their lifestyle. She has to be a comfortable and well-crafted space that looks and feels attractive and welcoming. Kit that would have been unthinkable a few years ago – hair dryers, hot boxes, and proper audio visual built into the interior are now common – and a jolly good thing too.

It is the production yachts that have led the charge and yanked yacht design and build and dragged it out of the dark ages. Companies like Hanse with their loft like interiors, Sealine with their tardis-like innards and Beneteau with their Sense range, where inside and outside living merge have all made a massive difference to the way that new yachts look today.

By providing sharp and 21st century design, they have enabled far more families to take to the water and enjoy the sport. The days of dark and gloomy interiors, with badly designed heads compartments and uncomfortable seating are thankfully past.

Not only does this sell new yachts, it has provided a shot in the arm to the second hand market as pre-owned yachts when on the market, can be sold to other families who can also enjoy this new and frankly, much better sort of shipboard life. Spending time yachting, even in our rather chilly and wet climes does not need to be a trial by brown and cricked neck. It can be a warm and relaxed experience where even on the dullest days, your yacht is a haven of light and comfort.

There are amazing interior designers who specialise in yachts – Andrew Winch, Nauta, Ken Frevoikh and many more. A lot of these designers will also carry out special orders for products other than yachts and this is very healthy. It is good to see more interior designers entering the fray and lend their magic to the design and build process. Although always important for larger yachts, interior design in the past has been something of an afterthought for much of the industry. In the 2000s builders liked to say that an interior designer had breathed on the interior of their latest yacht. Sadly in many cases, this meant that a full fee wasn’t paid and the colour palette was suggested by the interior designer and little else that they said was implemented aboard the finished article.

It has only been recently that interior design has increased in importance and become an equal partner to the yacht designer and builder for mid-range yachts. If you think of a design house like Nauta and the input that they have to a host of yachts from the Advanced Yachts that we market to Southern Wind and many more. They provide the magic glue that brings together the design and build to deliver a memorable and special yacht.

Motor yacht manufacturers were far ahead in the drive to innovate interior design and the sailing yacht market took a few years to catch up. It would be unthinkable to imagine a Windy boat without Design Unlimited’s sure footed design know how, yet they are a relatively new member of the world beating Windy team.

Even in the performance sailing yacht market where interiors are limited due to the need to save weight and to accommodate big crews offshore, it is now acknowledged that in a world where less is nearly always rather more, that a clever intervention by a talented interior designer can change the space from an area that has all the charm of public school changing room to an area that is light and stylish.

It is probably true to say that there was some snobbery around the use of interior designers who are not yacht specific. It was felt that interior designers had to be connected with yacht designer to understand the brief properly. In the past few years, a hole has been most certainly blown through this myth and fortunately for the yachting world we are now seeing interior designers of international repute entering the ring. There has always been a little of this in the mega yacht world but we are now seeing this for quality semi production yachts; a good example of this great innovation can be found with Pearl Yachts whom we represent in the UK and France.

Their fantastic interiors are all designed by Kelly Hoppen. This is a partnership where she provides a very full input into the look and feel of Pearl’s interiors. This is what she says about the design process and the look that she has developed for this brand –

Neutral palettes, beautiful textures and an East-meets-West aesthetic are all parts of my signature look. For me designing interiors is about creating a sense of balance and calm in a space, and this translates into my yacht design. Across my range of designs for Pearl Yachts, I have taken my signature neutral palette and mixed it with beautiful veneer finishes, touches of high gloss walnut, lacquer cabinetry, metal inlays and handcrafted marble. What I love about a neutral palette is its simplicity – yachts should be effortlessly glamorous.

For me, designing anything is the same – the aim is always to create something timeless, classic, and harmonious. Whether this is for homes, or for yachts, or even for products, you use the same part of the brain regardless. The main difference with boats is that you need to plan the design around the fact that everything needs to be screwed down, and storage is incredibly important. It’s true that you’re looking at something in a very different three-dimensional way, but ultimately you’re still using the same part of the brain to design.

Of course it’s not just new yachts that benefit from interior design. For preowned yachts, they can be transformed with an uprated interior to bring them into the 21st century. After all if you are refitting a yacht and replacing decks, paint, systems, machinery, electronics and AV – why wouldn’t you update the interior to make the most of the changes and upgrades that you have made? In many cases new moving parts are smaller and funkier than those originally fitted aboard the yacht when new and provides a new palette of choices for a clever interior design.

We saw this done with great effect aboard the Humphreys 77′ AGLAIA which came into Berthon for a very big refit in 2016. Her owner announced that the interior designer who worked with him and his family in his houses had been commissioned to take AGLAIA on. This was a decision that the Refit Department at Berthon received with some trepidation, but this was soon dispelled when they met and worked with Lola Beuyukian. She was imaginative, talented and very clever, and lifted the interior of AGLAIA in a subtle and very special way which brought her interior bang up to date and also delivered the look and feel that the owner and his family wanted to make the yacht feel theirs.

And did it enhance residual value? Absolutely! Could Berthon have created such a special interior without Lola and the owners’ input? Probably not, the result would have been a fantastic 2016 rebuild with a 2001 interior that was beautifully refinished.

So, the time of the interior designer is definitely here in our industry, and jolly well about time too! Acting as a vital part of the design process to deliver yachts that are fit for the 21st century, the only real mystery is why they weren’t used more in the past. We are excited about the increasing use of design that is not yacht specific. Understanding and being aware of space and how this is best used is something that all interior designers do, be it houses, apartments, cars, planes or buses. We also see huge advantages to using their experience in other sectors to keep yacht design innovative, fresh and relevant.

All power to the interior designers and their ability to banish boring, banal and brown…