58’ Berthon Classic SHELMALIER – Here’s one we made earlier!

SHELMALIER was built to iconic Laurent Giles designs by Berthon in 1964. 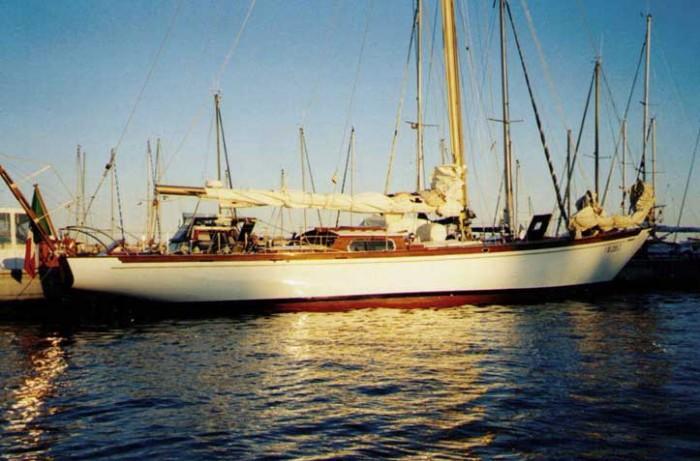 In that year she was the largest yacht to be built on the South Coast of the UK and her first owner Sir Ian Lloyd was to enjoy her for decades both in UK waters and later in the Mediterranean.

Built of Iroko beneath the waterline… 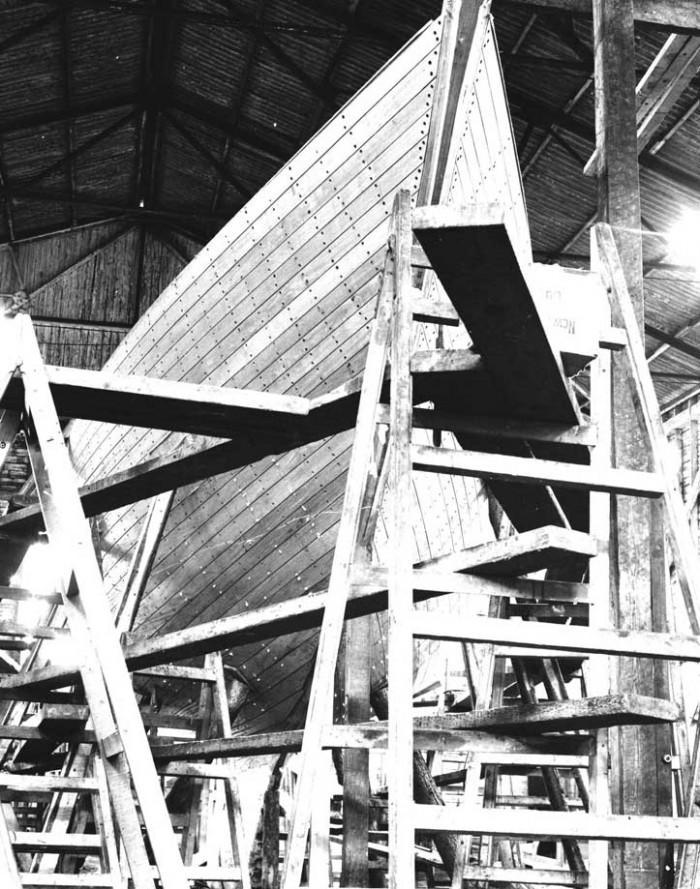 Two-ply Mahogany above the waterline… 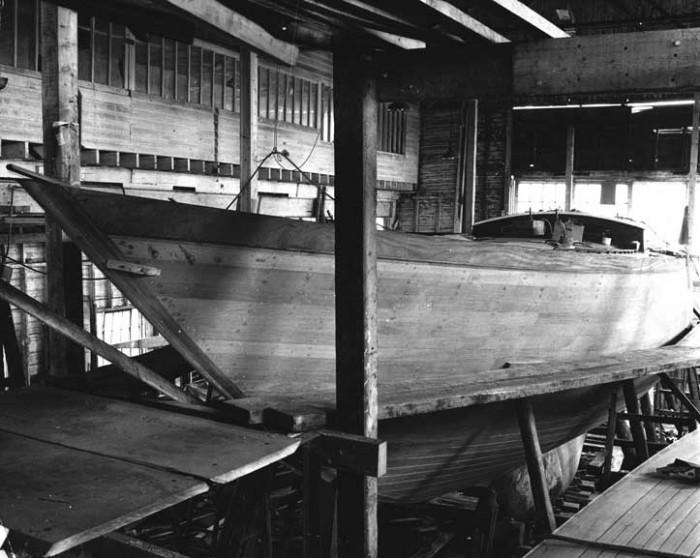 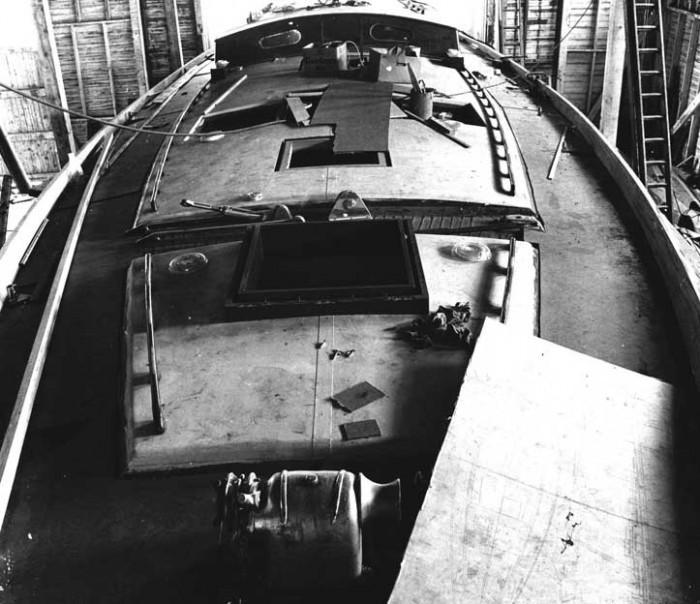 She managed both with aplomb. This method of construction made her durable and light weight for her day. 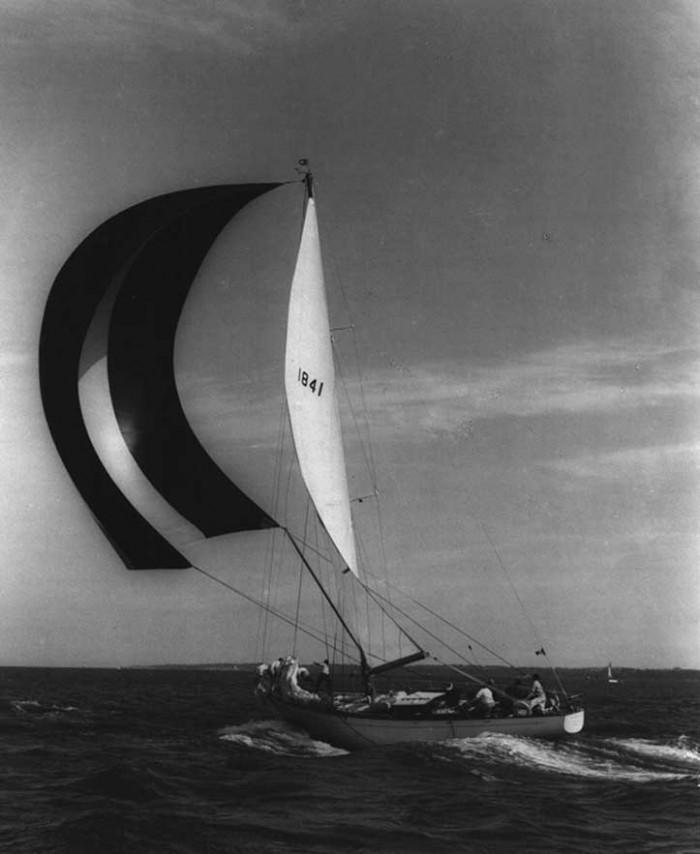 Her current owners purchased SHELMALIER through Berthon in 1992. At that time, she was showing her years and was in need of some TLC to fit her for her further yachting adventures. Her owner was determined to restore her faithfully to the condition in which she found herself on the sunny day on which she slid down the Berthon slipway in 1964 and found the River Lym.

The result is an enchanting classic sailing yacht that has lost absolutely none of the spirit and charm of her build year. 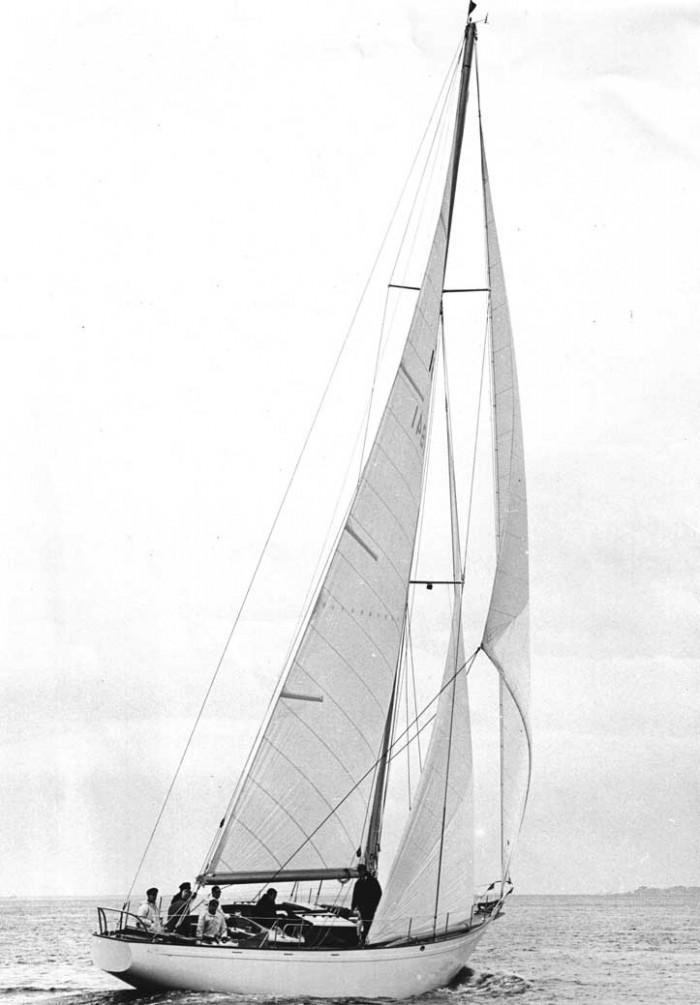 • Purchased in the South of France. We decided to carefully assess the works needed and put together a programme for SHELMALIER. We commenced work to the yacht in 1994.

• The first step of the restoration was undertaken by Chantier des Baux at Sanary Sur Mer in Toulon in France.
• The interior was completely removed.
• All the rotten steel stringers were removed (some which were still sound and were not replaced until a later phase of the restoration), and replaced with new custom stainless steel ones.
• All bulkhead and rib fixing bolts were changed and replaced with stainless steel.
• We removed the original steel fuel and fresh water tanks and replaced these with stainless steel equivalents.
• The original 36 hp Perkins was replaced with a new Yanmar 120hp turbo intercooler (actually weighing the same as the original).
• Two new engine alternators were fitted: delivering 24 volts for services and 12 volts for the engine and comms.
• We repositioned the original off centre shaft with a new stainless steel centreline one. This meant we had to modify the rudder. This is the only deviation from the original build plans, aboard SHELMALIER.
• We fitted a new aqua-drive for smooth gear operation and reduced vibration and a new large diameter Max Prop, with variable-pitch for low revving use.
• She has a new electric bilge pump beneath the shaft and a new SSB Furuno radio, as well as a 10 man liferaft.

• For three years SHELMALIER was docked at Cantieri Navali Di Imperia, Porto Maurizio Imperia in Italy. This was the period of major refurbishment under the supervision of Mario Quaranta the Director and naval architect of the company.
• Her hull and interior were stripped to bare wood and the original teak deck and ply sub deck were removed.
• All rotten hull planks were replaced. A new high quality marine ply sub deck was fitted and treated with West System.
• We sourced 25 year+ aged Siam teak for the new teak deck and this was screwed in place. The deck was sealed with two pack compound and then left for 6 months to avoid any shrinkage.
• New teak bulwarks were fitted and new teak decking to the cockpit.
• A new heavy duty bronze Genoa Yankee rail was fitted to replace the original weaker one which was deformed.
• We had new winch pedestals designed and fabricated.
• All deck fittings and winches were removed or re-furbished.
• New stainless steel wind scoops were fitted.
• A new stainless steel pulpit was made from original plans.
• New lines were fitted on original stanchions.
• We fitted a complete new set of stainless steel chain plates and a custom light weight gang-plank in teak. New teak flagstaff as well as a new stainless steel bathing ladder.
• North Sails built a mainsail for the original furling boom in Dacron.
• The underwater profile was stripped and the hull treated with the West System and then antifouled.
• The topsides taken back to bare wood and then primed and re-painted with two pack white paint with gold detailing.
• All deck areas were stripped and re-varnished where necessary.
• The mast and boom were professionally re sprayed with two pack Dupont vintage gold paint.
• A new manual bilge pump was fitted under the cockpit and a new Bombard rigid hull inflatable with 5hp Johnson outboard was put aboard.


Phase Two of the Restoration – Internal

• Complete rewire and electrics, including the restoration of the original chromed switch panel.
• The interior was repainted and varnished, and new interior lighting with identical replacements of the original fittings used.
• A new electric toilet was fitted in the forward heads original manual Victory Blakes toilet available for refitting if preferred.
• New seacocks in both heads and galley were fitted.
• New teak soles were fitted throughout with mahogany batons to cabin sides throughout the ship.
• Blue upholstery was fitted throughout with new crew mattress in cautchou latex for the forward cabin.

• We replaced the last remaining steel stringers around the base of the mast with new stainless steel ones.
• The topsides painted again with four coats of two pack high gloss using Stoppani paint with gold detailing.
• We also fitted a new 12 Volt battery charger in addition to the 24 Volt one fitted in 2006.

• SHELMALIER continues to be maintained to the highest standards. She has a part time skipper who maintains her regularly. In 2013 she has been hauled, fully serviced and re-antifouled, painted and varnished – the programme continues.

SHELMALIER has been used for Mediterranean sailing with her current family and has given enormous pleasure. Her owners’ words are below – 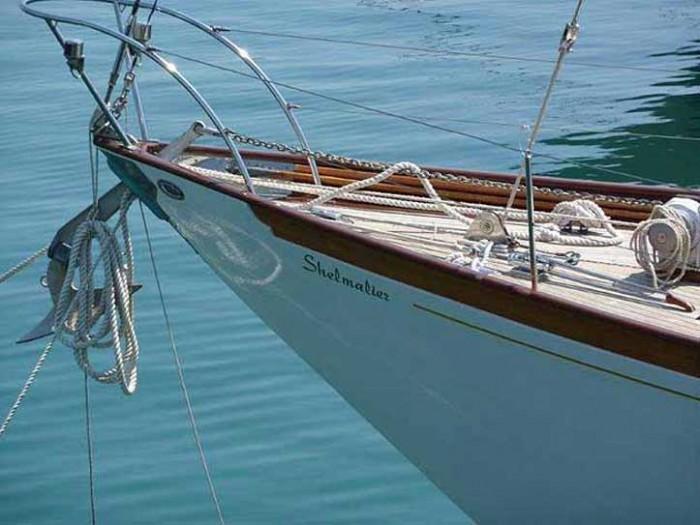 As with all classic yachts, you do not choose them – they choose you! We were entirely sure that SHELMALIER would become part of our sailing family as soon as we saw her. We knew that she would require work in order to put her back into good, reliable sailing condition and of course this was very much the case. 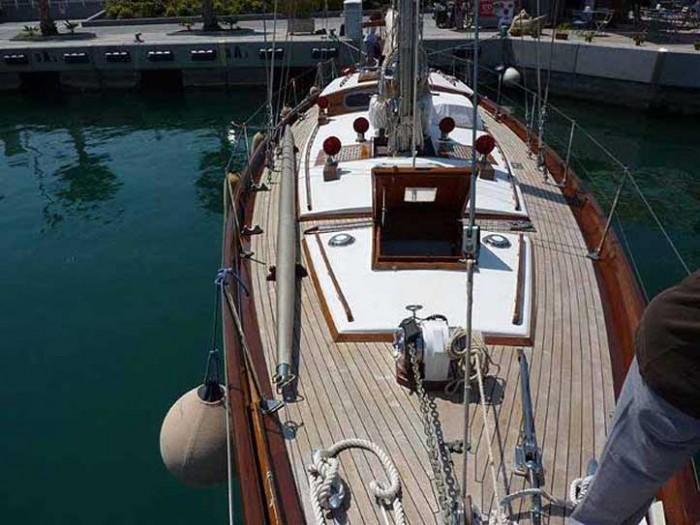 We chose to carry out a series of nautical makeovers, sailing the yacht between her forays to the Shipyard! It has been a great challenge as well as a joy to restore the yacht not just too reliable sailing condition, but to the condition that she was in when first launched at Berthon in 1964. This involved a lot of research to enable the Shipyard to replace parts with similar – in many cases this involved remaking the original article from scratch. Hard work and not cheap – but immensely rewarding in terms of maintaining the integrity and character of SHELMALIER. 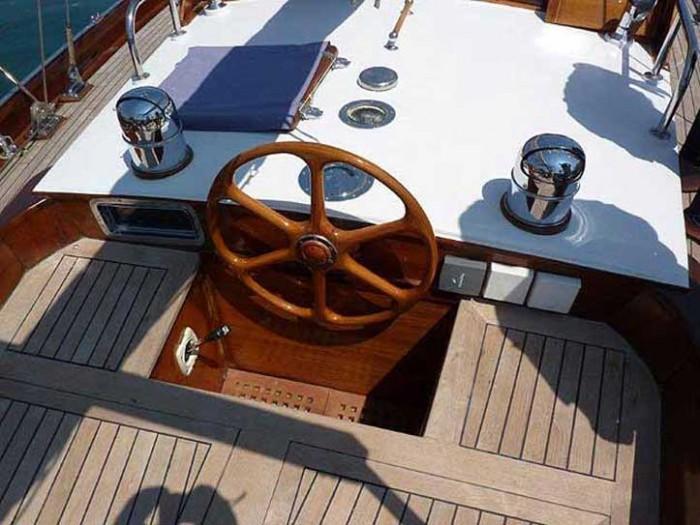 However, owning the yacht has been about so much more than the restoration of SHELMALIER. We own her as a syndicate and she has been an indispensable part of summer holidays for our families, where she has been a watery apartment, responsive and powerful sailing yacht, a talking point in any port that she enters and a focus from which we have all enjoyed the sea. 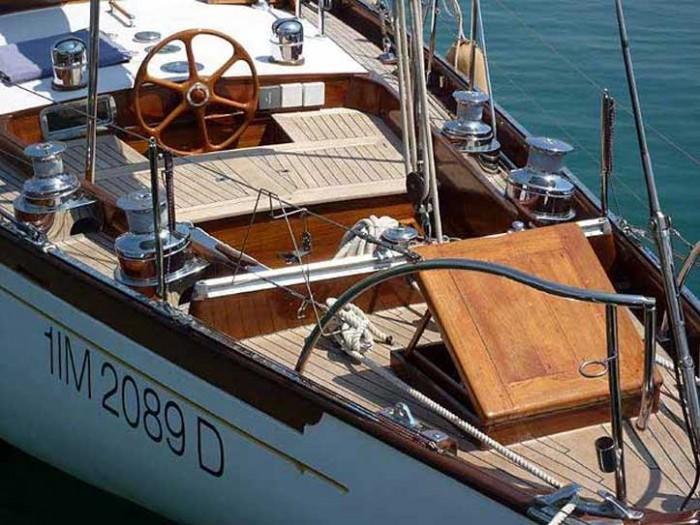 SHELMALIER is now offered for sale by Berthon and we invite you to contact us for more information about her and to discuss with us her new life.