Home Berthon Blog “ACHARNÉ IS THE BEST DAMN BOAT I’VE EVER HAD.”

“ACHARNÉ IS THE BEST DAMN BOAT I’VE EVER HAD.”

ACHARNÉ is an astonishing explorer yacht of composite construction, which started life as an IMS race boat and was subsequently rebuilt for serious ocean passage making, with an uber low carbon footprint.

Now in brokerage captivity (05/02/19), asking USD$475,000 and located in the Seychelles, she is an iconic yacht that has just completed a research project with these owners – she did brilliantly.

Berthon sold her to these owners and we thought that you might like to see this PassageMaker magazine feature, from November/December 2015, which was written when she was in her previous ownership by Ocean Voyager. 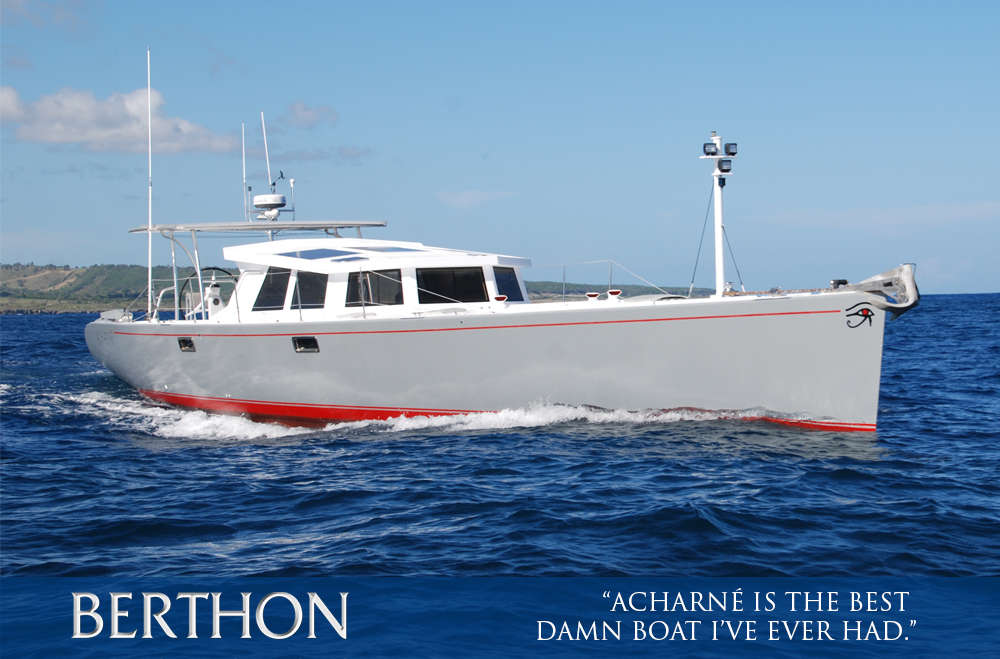 “ACHARNÉ IS THE BEST DAMN BOAT I’VE EVER HAD.” Sam Conor said. Conor owns Ocean Voyager, a boatbuilding company in Newfoundland, best known for converting existing commercial designs to long-range power cruisers. This boat, however, is something different altogether.

Acharné began life as a racing sailboat, christened, Sagamore. Designed by the late Bill Langan while he was chief designer at Sparkman & Stephens, she was built of carbon fiber in 1999 by New England Boatworks in Portsmouth, Rhode Island. Sagamore competed in the IMS Maxiboat World Championship against the well-established alpha-dogs of the era. She took line honors in the 2000 Bermuda Race, won the Middle Sea Race in 1999, and placed first (1999) and second (2000) at Antigua Race Week. Her owner campaigned hard, and after a dismasting during the 2007 Pineapple Cup, an 811-mile race from Fort Lauderdale to Montego Bay, Jamaica, he put her up for sale. Conor, who was looking for a new project, bought her.

Prior to Acharné, Conor owned Pink Shrimp, a 105-foot fishing trawler designed and engineered by Williamson Fabrications in Coden, Alabama, and built of steel in 2000 by Jemison Marine & Shipbuilding in Bayou La Batre, Alabama. Conor had fitted out the hull of Pink Shrimp for himself and cruised her in the Pacific until about 2009. 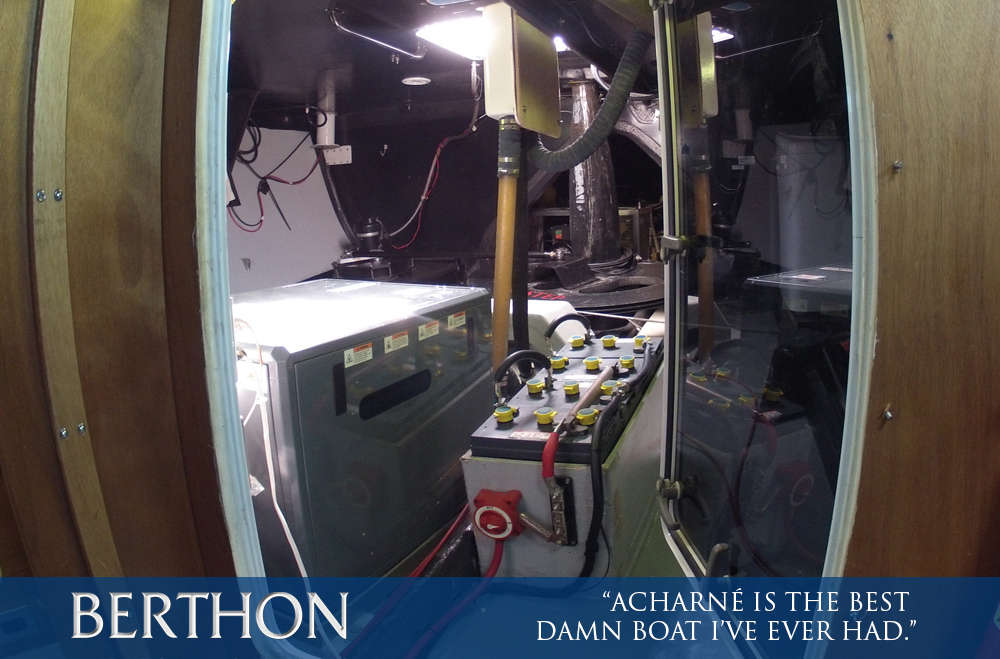 Pink Shrimp displaced 186 tons and carried nearly 18,000 gallons of fuel. A pair of 600-horsepower Cummins KTA 19 diesels gave her a top speed of 12 knots and a cruising speed of 9 knots. Her range at cruise was about 4,000 miles. Although trawlers are relatively economical to operate, topping up the tanks for a long nonstop cruise costs a small fortune. Diesel prices vary greatly by location, but for the sake of argument, let’s peg it at $3 per gallon. Filling Pink Shrimp’s tanks from empty would cost $54,000. This, plus the expense of full-time crew, made Conor reconsider his priorities. He began to long for a fast, simple, and economical long-range cruiser that he and his wife could easily run themselves. Eventually, Conor sold Pink Shrimp to well-known yachtsman Jack Setton, who commissioned Ocean Voyager to refit her to his specifications.

Conor is 67 years old and has been in the boat business all of his life. He’s owned 35 boats of 50 feet LOA and longer and sailed more than 100,000 miles. After he sold Pink Shrimp, he bought an Andrews 70 in San Diego. Designed by Alan Andrews, she was an ultralight-displacement racing boat, affectionately known among the cognoscenti as a sled, primarily because the type is very fast off the wind.

Conor, his wife, Virginia, and sons, Sean and Patrick, set off from San Diego in 2011 for a cruise through the Pacific. After stopping first at Cabo San Lucas, they pointed the bow westward.

“It was a peculiar year,” Conor recalled, “and the trade winds weren’t dependable.” In the fluky conditions that dominated the cruise, Conor and his family frequently had to reef the mainsail, shake out the reef, and change the headsails to match the conditions. Soon, Conor felt like Sisyphus condemned to Hades, eternally rolling the heavy rock uphill only to have it roll down again as it neared the top. Such are the joys of sailing a high-performance yacht. Eighteen months later, they’d had enough. “The cruise convinced me that I never wanted a sailboat again.”

When he spotted the damaged Sagamore on the market, he had a vision. Obsolete racing sailboats often have a difficult time finding a new home and sometimes sell for less than the sophisticated technology warrants. Some of them get upgraded with a new rig, sail-handling gear, keel, and rudder, and continue to compete in offshore handicap events such as the Newport-Bermuda race, or in yacht club races close to home. A moderate design of Sagamore’s ilk lends itself to being re-made into a cruising sailboat, but Conor saw a potential that others may have missed. He’d turn her into a motoryacht. 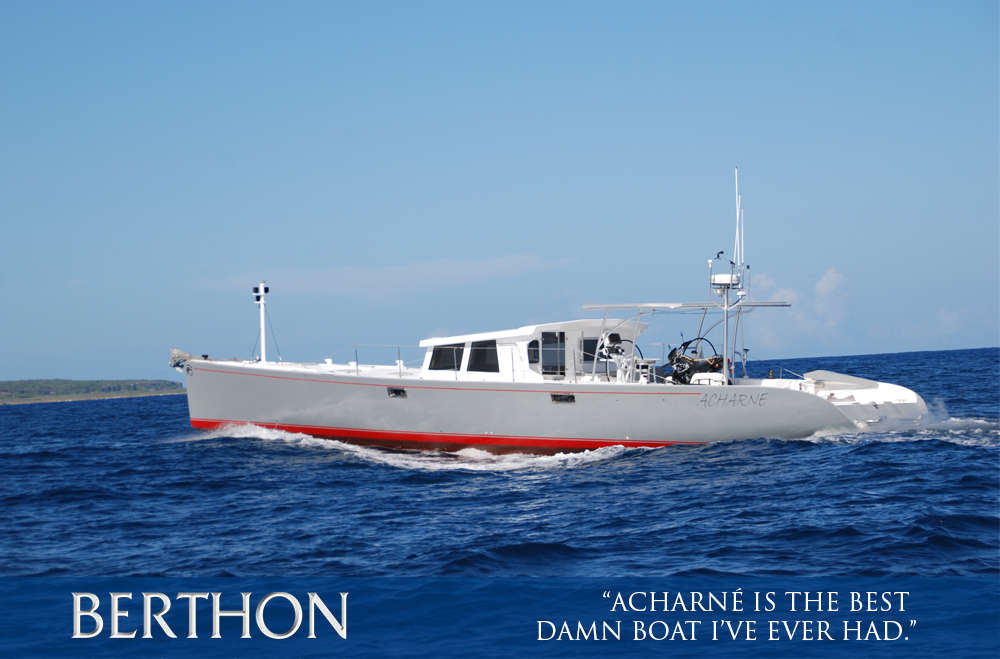 Converting a racing sailboat to a motoryacht is not as daffy as it seems. To begin with, she has to be easily driven to perform well under sail, so she doesn’t need a lot of horsepower to reach theoretical hull speed. If we compare the hull with that of a lightweight powerboat, such as the Rangeboat line designed by Nigel Irens, we’ll discover that the ability to sail well—fast and balanced, heeled to optimum or bolt upright—compromises her waterline. This tradeoff, however, is negligible. On the plus side of the ledger, displacement boats—sail and power—benefit from a long waterline. Acharné’s load waterline (LWL) is 68 feet, 11 inches, which is about 86 percent of her overall length. This gives the hull a theoretical displacement speed of 11 knots, but the shape of her underbody and light displacement allow her to exceed that speed. As a sailboat, she displaced 65,000 pounds, giving her a displacement/LWL ratio of 88.33. That’s super light.

To make her a competitive racing boat, she had a fin keel with a ballast bulb at the tip, giving her a draft of 14 feet, 6 inches. One of the first changes Conor made was to shorten the span of the keel to 6 feet, 6 inches, which removed about 22,000 pounds of ballast. The modified keel weighs 5,000 pounds, and Conor added 6,000 pounds of ballast inside the hull to maintain stability. He kept the original hydrodynamically effective rudder. Her fully loaded displacement now is 19 tons, resulting in a displacement/LWL ratio of 51.6. Conor said that Acharné can cruise all day at 10 knots, burning 2.75 gallons per hour, upwind in moderate seas. He’s seen 12.5 knots surfing on the face of a wave and told me that 240 to 270 miles a day is normal—depending on conditions.

Ultralight-displacement boats dance along the surface of the sea like a water strider and have a quick motion in a seaway, instead of the slow deliberate heave, pitch, and roll common to heavy-displacement monohulls. Quick, though, doesn’t mean violent. Acharné’s underbody is very shallow compared with that of a traditional sailing yacht, but her elliptical cross sections soften her motion. Her fine entry splits the seas, and prepares the way for the beamy sections farther aft to lift her over the swell. “Her motion is more like a catamaran’s,” Conor said. “Even at anchor she doesn’t roll.” Although the keel doesn’t have a lot of surface area, its depth and weight help to damp roll, especially when the boat is at speed. Conor fitted Acharné with active fin stabilizers, but he uses them only occasionally.
Reducing the yacht’s displacement by 14½ tons, removing the sailing rig, and replacing her auxiliary diesel with the more powerful and heavier 210-horsepower Cummins 6BT 5.91 turbo diesel caused Conor and his team to examine the weight distribution.

Acharné carries 700 gallons of fuel in four aluminum tanks plus one reserve arranged around the center buoyancy to prevent significant changes in trim as they empty. In her sailing life, she obviously wouldn’t have needed that much fuel capacity. Conor placed the two freshwater tanks—140 gallons total—well forward to balance the weight of the equipment in the dive center under the afterdeck, the air conditioner, and water maker. 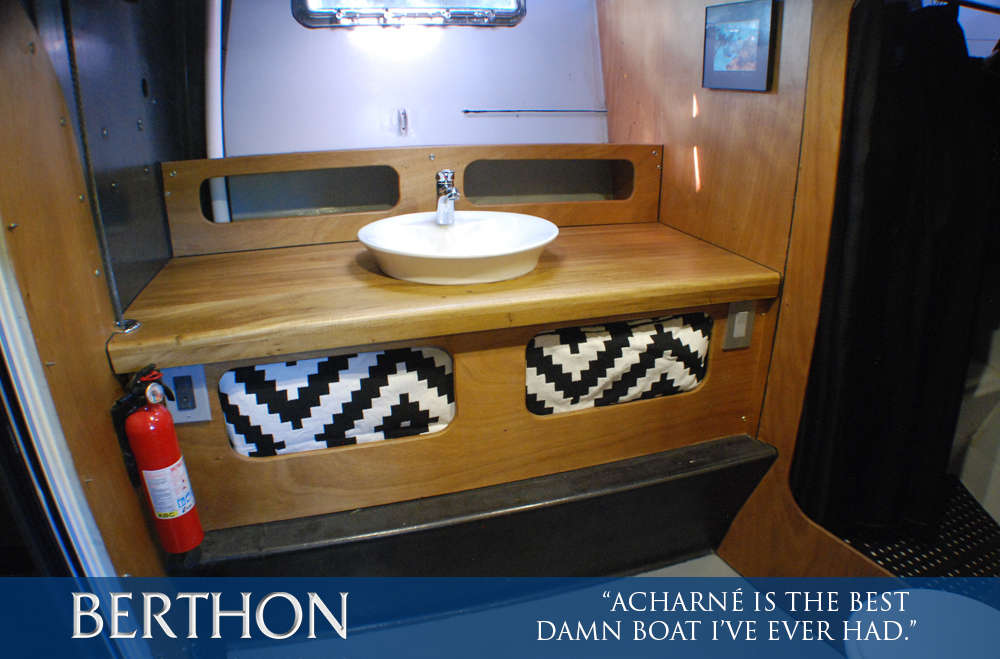 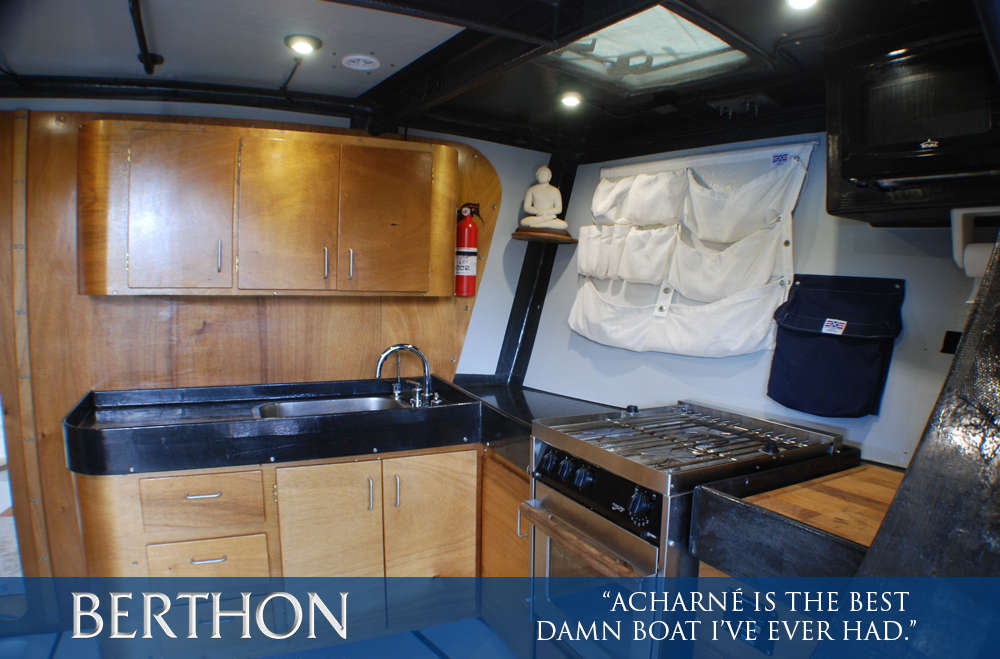 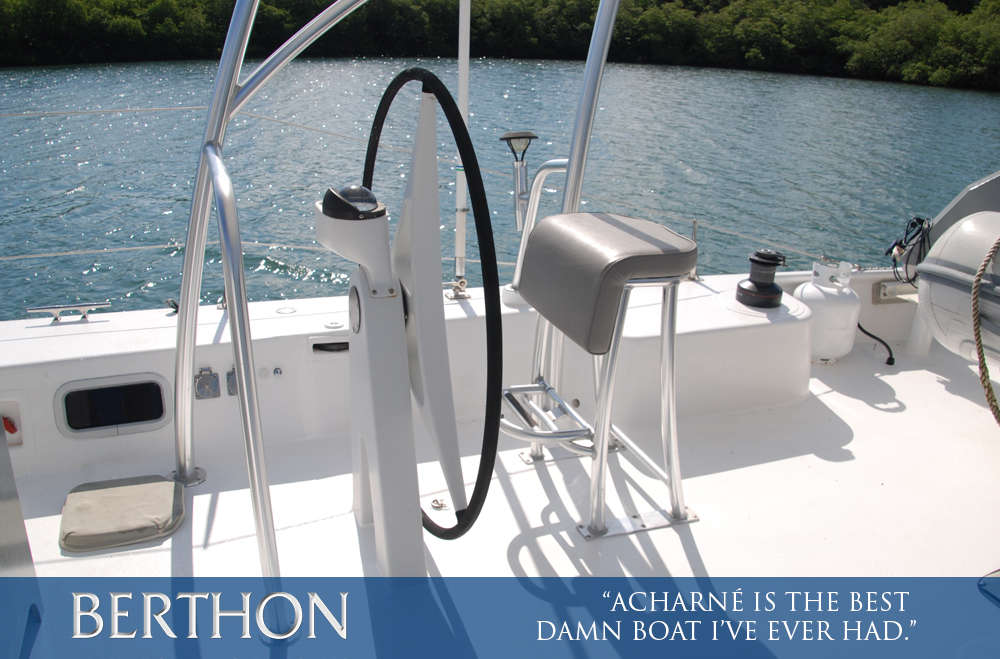 As a racing boat, Acharné had a flush deck and a typically large, flat cockpit—the latter cluttered by a village of winches, grinders, blocks, and other sail-handling gear. Conor removed all of that hardware and patched the holes, so now the deck and cockpit are remarkably free of excrescences, except for a trio of dorade vents, a few hatches, and a searchlight mast on the foredeck. Lifelines along about half of the deck’s length protect anyone who goes forward from taking an unplanned swim.

Sagamore’s spacious cockpit appealed to Conor, and he makes good use of it, carrying an AB 3.5-meter RIB and a small motorcycle on the afterdeck. Twin wheels, also common aboard modern racing sailboats, enhance the helmsman’s sightlines and allow him to get his weight farther out on the high side. Although lateral weight distribution doesn’t count as much aboard a motoryacht, Conor retained the dual helms and binnacles to help him see beyond the deckhouse.

Fitting a truly useful deckhouse to a low-profile hull requires a bunch of compromises. If aesthetics carry a lot of weight, the house can’t be too tall. On the other hand, it needs standing headroom to be practical and comfortable. Conor resolved the conflict by placing the maximum height of the house aft, where the settees and dinette are, and the lowest part forward, where you begin the two-step descent into the main saloon. Natural light from windows floods the saloon and helps brighten the galley, which is located a bit farther aft. Although this superstructure is angular and upright, it perfectly matches Acharné’s role as a motoryacht.

A carbon-fiber racing sailboat operates under enormous loads from the rig and keel. The shrouds, fixed and running backstays, and the forestay keep the mast in column and from being blown out of the boat, but all that tension wants to eject the mast through the bottom of the hull. “She’s way stronger than she needs to be,” Conor said. A grid of carbon-fiber floors (transverse reinforcement) and stringers (longitudinal reinforcement) stiffen the hull where the keel attaches and where the original mast stepped. Ring-frame bulkheads, which traverse the bilges, extend up the topsides and across the beam beneath the deck, add stiffness to the rest of the shell. Engineered and built to resist flexing or breaking under extreme loads, Acharné will think she’s died and gone to heaven dealing with the trifling stresses of life as a motoryacht. 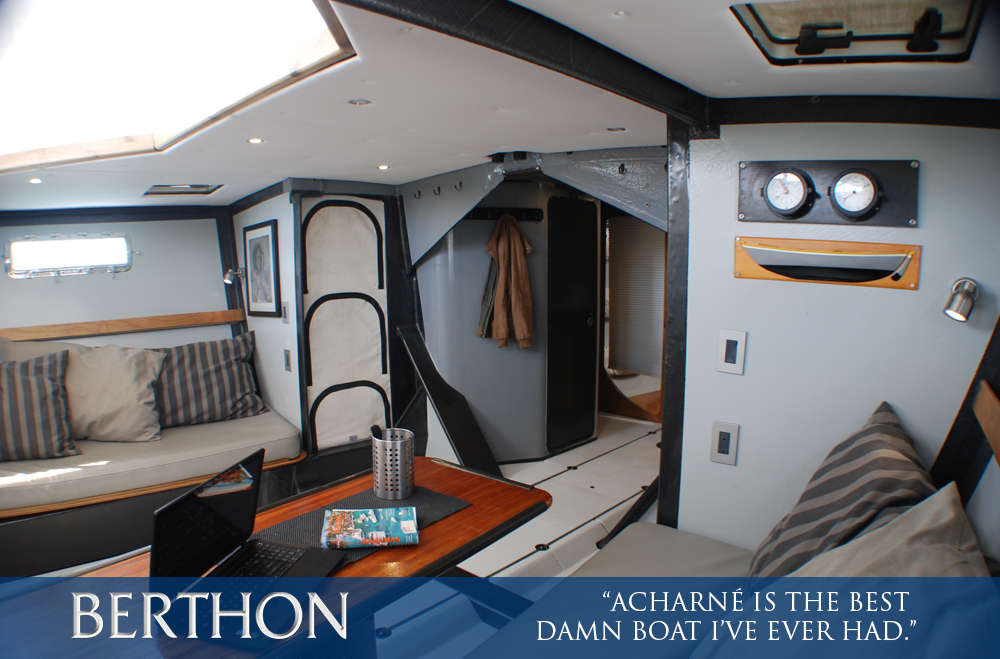 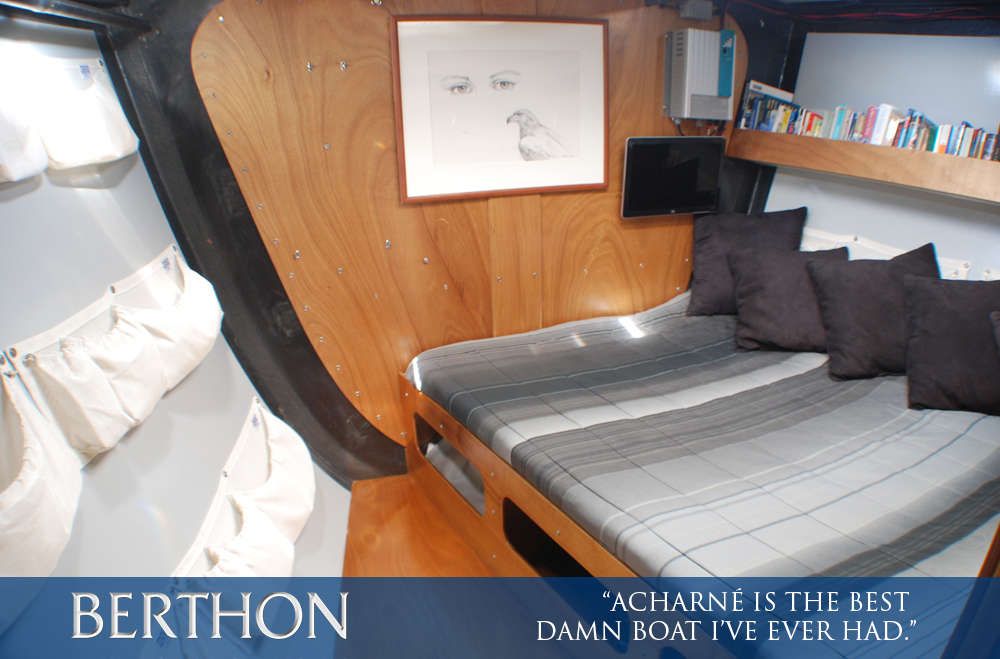 If this conversion has a downside, it’s a lack of volume belowdecks caused by the shallow underbody, relatively narrow beam—a bit more than 16 feet—and low profile. The Nordhavn 78, for example, has the same LWL as Acharné and draws 7 feet, 8 inches measured to the bottom of the skeg that protects the prop and rudder. Her bilges are cavernous, freeboard high, and beam measures 21 feet, giving her all the space in the world for stowage, staterooms, stand-up engine room, and massive saloon.

Even though Acharné isn’t all that roomy below, she has two staterooms with a queen-size berth in each, two heads with a shower in each, a reasonably spacious main saloon, and a fully equipped galley. A fair amount of carbon-fiber structure displayed in the accommodations gives her a modern, minimalist atmosphere. Conor could have sheathed a lot of the carbon with wood, but that would have increased the displacement and added substantially to the cosmetic maintenance.

Acharné is for sale at about $750,000 and ought to attract sailors who can’t give up the ambience of a high-performance sailing yacht. These prospective buyers won’t mourn the shortage of stowage space or the absence of huge windows and luxurious sprawling room in the common areas. To be sure, Acharné needs a special owner. 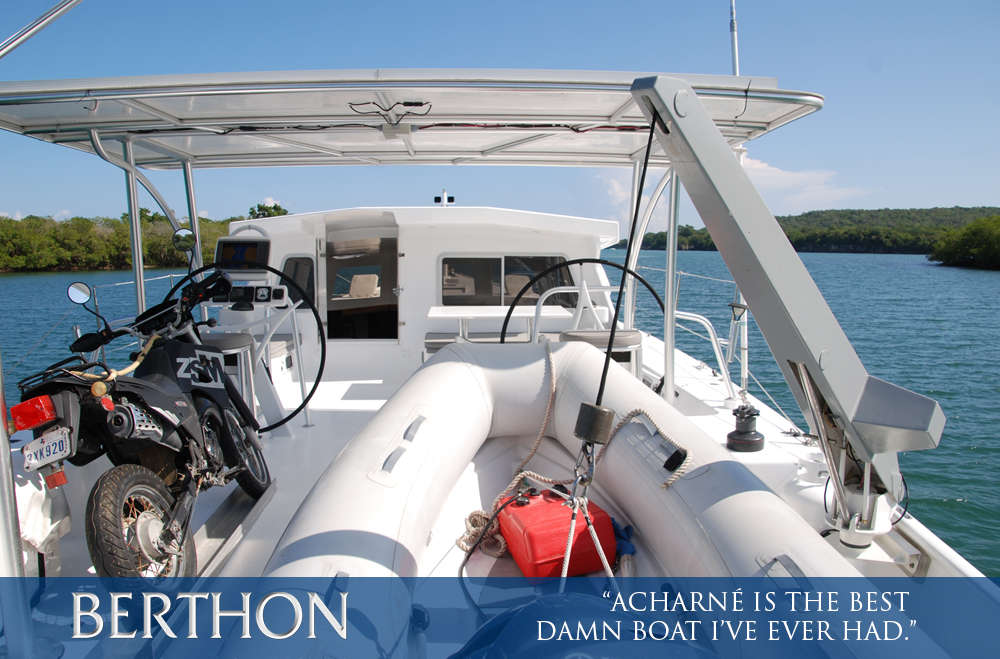