All About Discovery 55’s MISS BEHAVING 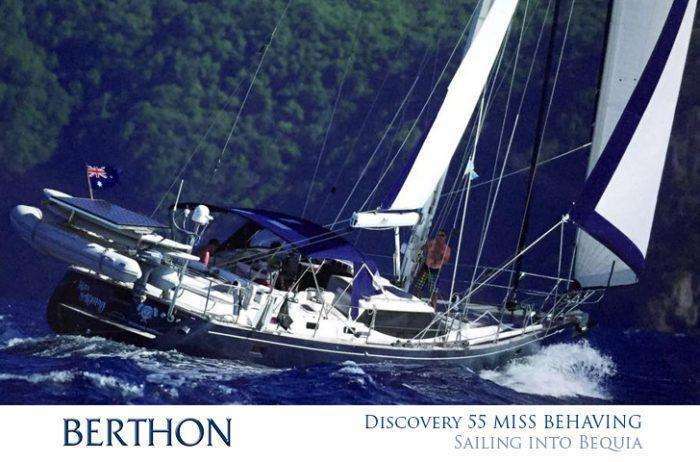 If you’re keen to understand what it is about MISS BEHAVING that makes her so special, it’s worth knowing that, when it comes to bluewater cruising, her current owner has form; he found his sea legs at an early age, cruising across the Pacific as a child, then again as a teenager with his father, and then sailing from the Caribbean to Australia in his mid-20’s; he’s been there and done it. It makes sense, therefore, that his most recent voyage has been on the bucket list for some time. He and his young family are fresh back from four incredible years undertaking what can best be described as a true 21st century odyssey.

Millennium year saw him and his wife navigate their way across the Pacific once again; whilst underway, they had what would prove to be a life-changing conversation; should they head home as planned, or just keep going? They decided the timing wasn’t right, and agreed to head home, make some money, have two children then buy a bigger, better yacht to do the other half of the world. Just over a decade later in 2012, that moment arrived and their minds were made up: the time had come to gather up the gang, sell the business, pack up the house, and circumnavigate the globe as a family. Then followed discussions about their route. Start in Melbourne, work their way up the east coast of Australia, stop in Indonesia, Borneo, Singapore, Malaysia, Thailand, Sri Lanka and the Maldives, and then work their way across to the Med for a few months, finally returning home to Melbourne again. Their plans were ambitious. Now they just needed to find the right bit of kit to take them there, safely, comfortably and within their scheduled time-frame.

They’d been hunting for the right yacht for some time. They knew she needed to be modern and comfortable, but above all, the right size and spec to cope with long passages, be comparatively easy to handle and able to withstand the varying conditions they were invariably going to encounter on their voyage. After extensive searching, and unable to find exactly what they were looking for, they decided they would go ahead and commission a new yacht, and one able to match their cruising plans. However, things were inevitably delayed and it began to look like there might be a problem getting the yacht completed in time for the off.

Friends with similar bluewater experience had told them about the Discovery 55 – a special design perfect for the kind of cruising they were looking to take on. With the completion date of their commissioned boat looking increasingly unworkable, their search quietly resumed, focusing on the pre-owned Discovery market. Not only was the Discovery 55 the right design for the job, but the raised saloon and nav station – a feature incredibly well-conceived and executed – set her apart from other bluewater cruising yachts on the market.

Then, out of the blue, a Discovery 55 became available. Better still, she was already in Australia. Her current owner jumped on a plane two days later, and his mind was made up. She was such a beautiful, and wholly suitable yacht for the journey that he and the family took a deep breath, swallowed hard and walked away from their deposit on the new-build in order to begin their adventure with MISS BEHAVING instead. Buying her as a three year old, they felt she needed a little modifying – they had intended to buy a new boat, and as such brought her up as close as they could to a brand new standard; she was given a total overhaul, both internally and externally, bringing her spec fully up to date and kitting her out with all the mod cons you could ever need for their intended voyage. By the time they were finished, she had gone from being a great design in need of a makeover, to an unbelievably awesome yacht, hi-tech, well-equipped and gorgeous. As the owner puts it, he splurged! 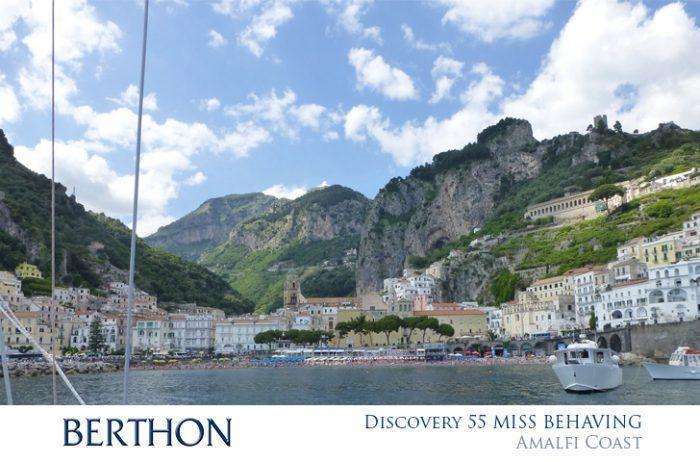 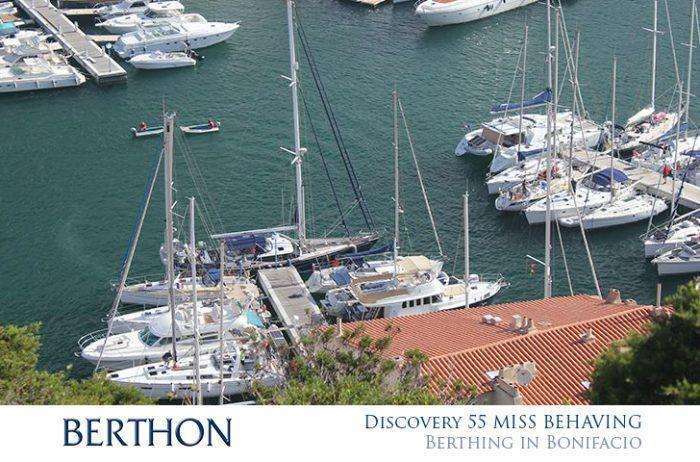 So how did she perform once underway? Her current owner – a man who, by his own admission, has a fondness for a gadget – has documented a great deal of her voyage on YouTube for those keen to watch it first-hand. In the meantime, however, he’ll be the first to say she exceeded all expectations. And then some. Firstly, her speed is something worth writing home about, as her fellow cruisers left in her wake will tell you. Passage times were quicker than anyone expected, enabling more ambitious passages without stress levels altering incrementally; such impressive swiftness really came into effect when her owners felt confident they could outrun a front coming over the horizon as they were due to leave the Canaries; their fellow cruisers decided to stay put, adding at least another fortnight to their journeys. MISS BEHAVING set sail however, and despite the front nipping at her heels most of the way, they out-sailed the storm.

On top of her superior speed, she handles like an absolute dream, and her ample length doesn’t impact this at all. According to her owner, a lot of their friends and family expressed concern about her size – wasn’t she ‘too big for that kind of bluewater cruising?’ they asked. Not a bit of it. In fact, when asked about what yacht he’d buy now, her owner says simply, he’d go even bigger. Without a doubt, she’s been put together with owner/ driver in mind; her ease of handling and well thought through design (both practically and aesthetically) make her a joy to sail. 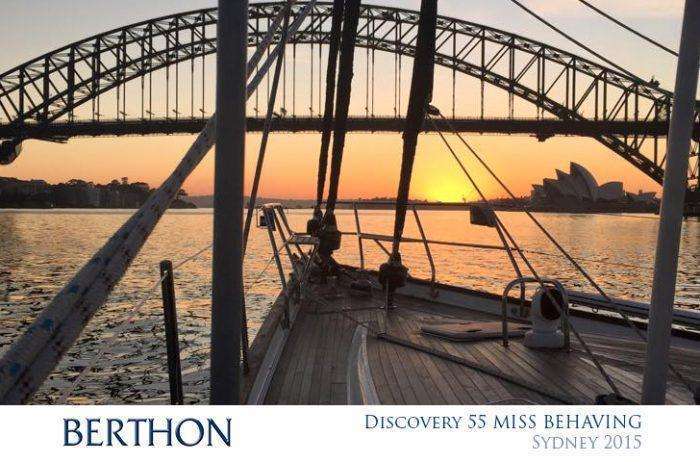 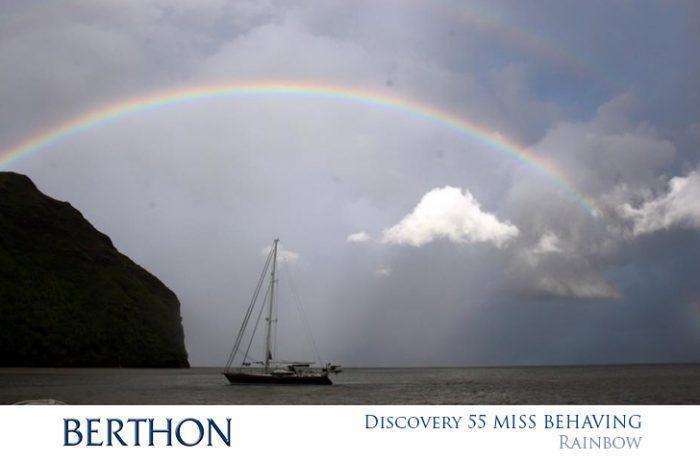 Inevitably, a voyage of this scale put her through her paces – no yacht would make it around the world unblemished. Those who worked on her commented on how good a yacht she was to maintain, and Discovery themselves really surpassed expectations. 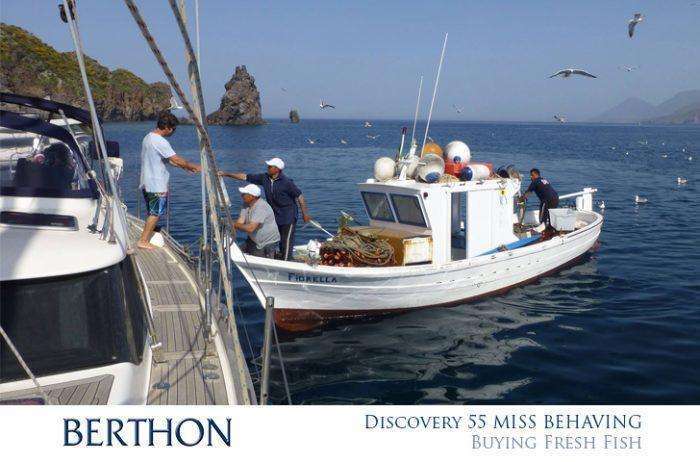 No job was too difficult, no part too hard to locate and deliver, wherever in the world she was at the time – a level of service her owner feels is first class. He even went as far as to say he’d buy another Discovery for this level of support alone. 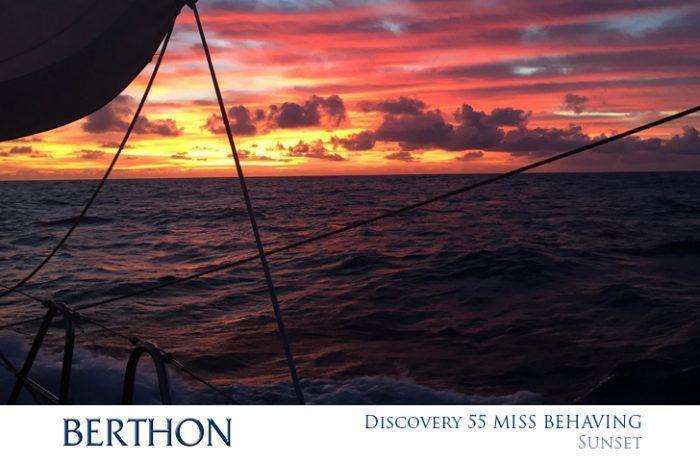 Her owners continually updated her as they went – new hatches, anchoring gear, some rigging work about half way through the voyage, then in late 2014 they upgraded all the main electronics to the latest Raymarine. In the last few months they did a haul out, fresh bottom paint, repainted boot stripes, hull polishing, some maintenance on sails and rigging – plus more. All in all, approximately $20k of bits and pieces. This was to keep the yacht in great shape, and means she is prepped and ready for her next bluewater adventure.

As a final comment, we asked her owner to sum up how she makes you feel. In a word: proud. Proud because she’s such a beautiful looking yacht, and proud that you’re sailing a great yacht designed to deliver optimum security and comfort at all times. 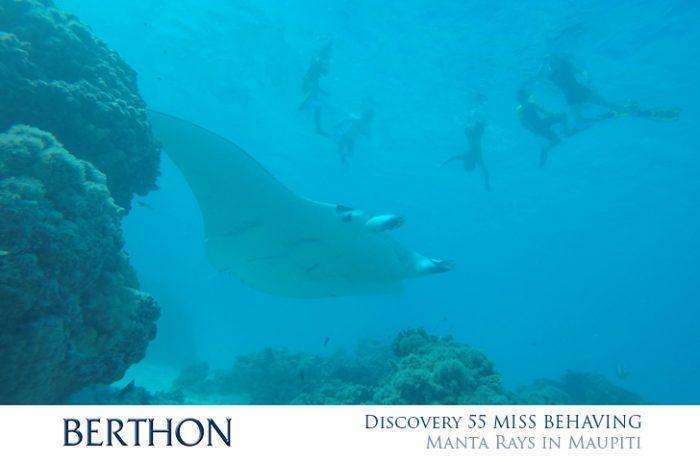 MISS BEHAVING’s been on a massive adventure – the kind that really keeps you focused on what’s important in life – but it’s time now to hand over the reins to a new custodian, to take her on her next voyage of discovery. However far afield you’re looking to go, her owner will tell you, she’s the yacht to take you there.

For her full specification visit Discovery 55 MISS BEHAVING [OFF MARKET].    Check all current yachts for sale.

Watch the footage of her in action here: