FPB – The Concept in Reality.

Traditional thinking has held that you need a sailboat to cross big expanses of ocean, and that this be done slowly downwind. A few trawler type yachts occasionally attempt long distance cruising, but they do so typically laden with on deck fuel supplies, going no faster, and often slower, than sailing yachts.

But what if you could cross the longest stretch of ocean at 9+ knots upwind or downwind, with minimum motion, consuming relatively minuscule amounts of fuel while maintaining a comfortable ambiance, without ever running a generator? 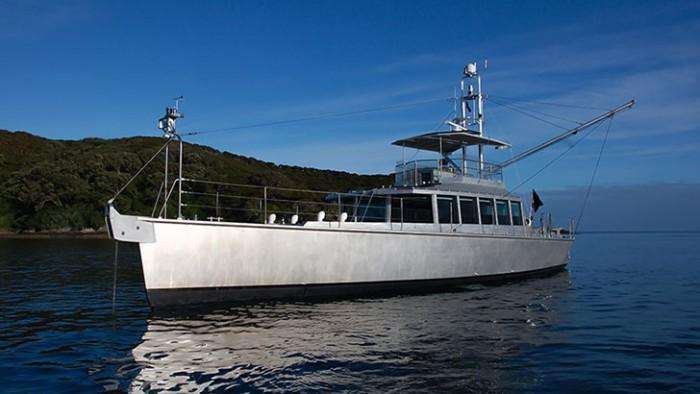 This was Steve and Linda Dashews’ concept when the iconic sailing yacht designers created the ground-breaking FPB 83 Wind Horse.

In six short years of cruising, Wind Horse accumulated over 60,000 nautical miles, with just a crew of two, ranging from her birthplace of New Zealand to 80 degrees north, 600 miles shy of the North Pole.

In the last four years, nine FPB 64s have followed in Wind Horse’s wake, with over 70,000 nm of cruising among them. While these distances seem unusual, one need only reference the historical cruising mileage of the Dashews’ sailing fleet to recognize that the numbers are no anomaly. Of the 37 Sundeer, Beowulf and Deerfoot yachts for which there are records, the average cruising mileage per hull is over 54,000 NM.

The Dashews believe that if you optimize for long distance cruising, the boats will go. This philosophy starts with heavy weather capability and includes high average boat speeds. Both characteristics yield a comfortable and quick passage, while minimizing weather risks.

The recent 2400 nm passage of FPB 64-6 GREY WOLF illustrates this philosophy in action. 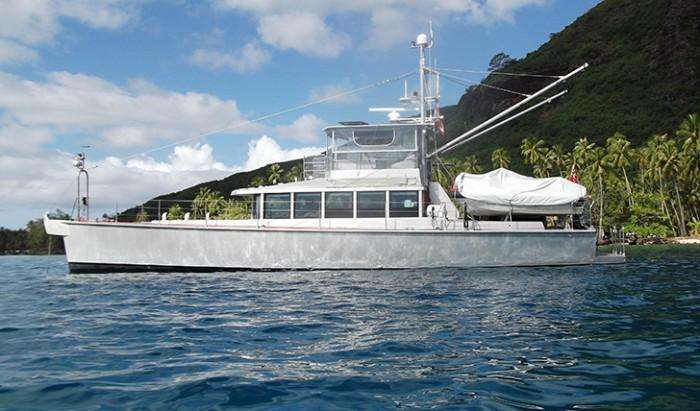 Owner Peter Watson is on his way back to his home waters in the UK from New Zealand via Panama, The Bahamas, and Bermuda. The 2400 nautical mile leg between New Zealand and French Polynesia was accomplished at an average speed of 9.4 knots, burning just 19.6 L/5.2 G per hour. GREY WOLF arrived with sufficient fuel left in her tanks for another 3000+ nautical miles. This out of season voyage was primarily uphill with just a hint of downwind powering. Leaving New Zealand on the heels of a tropical cyclone, their boat speed allowed for a much easier passage than would otherwise have been the case. At the same time, the limits of ocean weather forecasting were demonstrated, as well as the necessity of being properly prepared for Mother Nature’s surprises.

Peter Watson picks up the story:

“I have had the experience of sailing over the Atlantic a couple of times, but the Pacific is a whole different world– until you cross this ocean you really don’t appreciate how big it is. With GREY WOLF I am quite confident, but still always treat the sea with a great deal of respect, otherwise it will catch you out.

Of course, on a long passage like this, weather is everything. We’ve learned never to completely believe what a forecaster tells you and to keep an eye on the barometer. The performance polars we had for GREY WOLF, her ability to maintain a consistent average speed in conjunction with the routing software, and the comments of New Zealand weather router Bob McDavitt, made it possible for us to minimize most, though not all, of the weather risks we faced.

On several occasions, when the models varied from reality, the difference was extreme, and you might say spectacularly wrong. I understand now why it’s a good idea to have two weather routers available for a passage like the one we just completed. It allowed us to compare the forecasters’ different views with our own version of the weather, so that we were able to make better judgments on the spot. Bob McDavitt was generally able to look further forward than we could, so as to alert us to possible changes that were on the way. 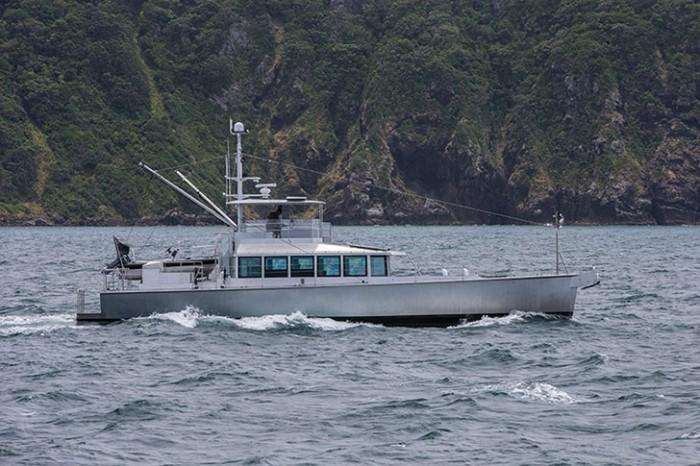 When we were taken by surprise by the un-forecast tropical storm, being able to get on the sat phone and ask ‘What the Hell was going on, how long was it going to last, and what direction should we be heading?’ gave us a second opinion from someone with access to a lot more data than we had onboard. There was great comfort in being able to compare notes. I had never been on the edge of a tropical storm and would be very happy not to repeat it.”

“Whilst in the teeth of the squall we had 50+kts on the port beam with a 3m swell combined, and control remained excellent. Roll control in 3m beam swells was equally impressive, with little apparent roll except on the shortest of wave lengths. With a large rudder and the autopilot set up correctly, control is maintained, surfing with aplomb and with very little rudder input. The directional stability going ahead is impressive.”

“We really felt quite safe, a helluva lot safer than any other yacht. In fact, looking at the passage as a whole, I would not like to be out in some of the conditions we had other than aboard an FPB or a British built RNLI Life Boat. The performance and comfort was phenomenally better than a sailboat; and I should say something about the seat, lap and bunk belts on all the FPBs – how many ocean going yachts do you know that have them? In conditions when no one would normally be at sea, they make sitting and sleeping more comfortable, and are an excellent safety feature.

Thinking back, it wasn’t such a big deal. But you have to remember I’d already been out with GREY WOLF by myself in Force 6 to 7, which felt like a 3, so the performance at sea was as I expected.

In spite of making an out of season, potentially difficult passage, our speed allowed us to stay for the most part in conditions that were pleasant. My favourite spot when the weather was nice was up on the Matrix deck on a bean bag seat. Otherwise I was in the great room, enjoying the ride.

The most fun is surfing. It adds speed, comfort, and a thrill. Our top speed was 14.6 knots.”

Another friend of Peter Watson aboard for the passage is engineer Jeff Holden. Jeff reports that all equipment is operating well:

“Preventative maintenance carried out in Tahiti has included a main engine oil change with new filter fitted, raw water pump impeller change, alternator drive belt change and general inspection for wear and leaks. We also inspected the raw water suction strainers and found the almost inevitable plastic bag blocking most of one of them, good job we had both open whilst at sea. All temperatures and pressures have been monitored as we travelled here, we have had no unexplained changes. Even with the sea temperature getting up to 29.7 deg. Celsius, no cooling issues have shown up.” 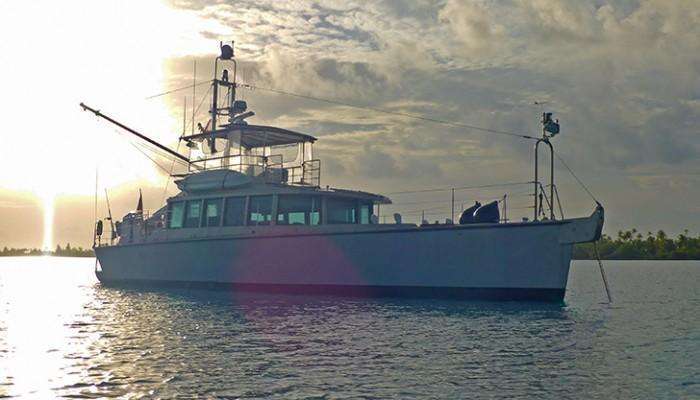 A recap of the first leg is as follows:

“With 5085L having been consumed on this stage 1 Pacific crossing, at their speed and burn rate they have 7000L of fuel left which gives an additional range of 3400 nautical miles on top of the 2400 or so already run. Actually, we would expect a little better than this since they would be running lighter.”

Although the comments so far have emphasized the adverse weather, this was by no means the norm. Tony remarks regarding average conditions on passage:

“Two days with swell abaft the beam giving surfing conditions and a max speed of 14.6kts. The remainder of the time the swell was forward of the beam, generally between 30-60deg off the starboard bow, but on the final day it moved onto the nose overnight before returning to the prevailing 30-60deg off the starboard bow. Average swell height 2-3m. Sea state superimposed on the swell between 1-2.5m. Winds varied from predominant SE through E round to W in the squall off Rarotonga (54kts).”

“GREY WOLF is a wonderful boat, capable of great comfort. If the going gets tough she is the safest boat I have ever been in, and her ability to cross oceans quickly and comfortably is what I love best about her, along with the knowledge that she has the ability to be safe if the weather does turn unexpectedly nasty.” 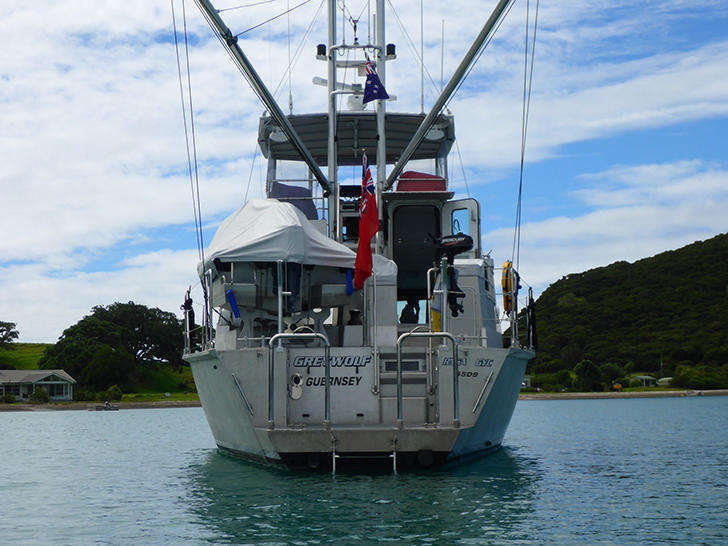 “Peter Watson was faced with a passage timing conundrum.  His 14,000 nautical mile return trip to the UK makes it difficult to optimize the entire trip in terms of weather. By waiting for the passage of a tropical cyclone, Peter Watson was able to take advantage of a relative period of calm and relaxed trade winds for the first part of the voyage.

For this approach to be successful, reducing the tropical weather risk to an acceptable level, GREY WOLF had to be able to maintain her 9+ knot passage speed in all conditions.

The un-forecast intense tropical weather system GREY WOLF encountered was an example of limitations of modern forecasting. The bottom line in the ocean crossing weather context is that the models are not particularly accurate in predicting wind strength and direction near frontal boundaries, convergence zones and depressions.

Although the speed and range may seem surprising, they are actually at the lower end of the performance spectrum of which GREY WOLF is capable.”

While Peter Watson’s out of season New Zealand to Tahiti passage is unusual in a cruising context, it is very much the norm for the FPB fleet. Last year, FPB 64-3 Iron Lady made the same trip, worked her way up to the Marquesas Islands, then Hawaii. As this is being written she is heading for Alaska via the Straits of Juan de Fuca, a 2300 nautical mile passage. At the same time, FPB 64-1 Avatar, having cruised throughout the Pacific for several seasons, has worked her way north along the Pacific coast, from California to British Columbia. Recent ocean crossings by FPB 64-7 Buffalo Nickel from Fiji to New Zealand, and FPB 64-9 Orca from New Zealand to Fiji, add to the total. In the next few weeks, FPB 64-5 Tiger will be heading to Tonga, while FPB 64-8 Atlantis is leaving for New Caledonia. 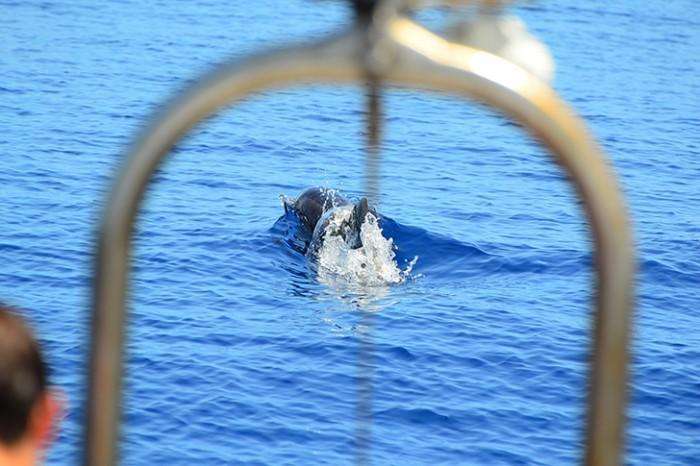 Steve Dashew is the iconic designer of the Deerfoot, Sundeer, Beowulf series of sailing yachts and the FPB motor yacht range. Together with his wife Linda, he is the author of eight books including Offshore Cruising Encyclopedia, Mariner’s Weather Handbook, and Surviving the Storm.

For detailed information on the FPB Concept see: http://SetSail.com/why-fpb-3

For information on the FPB 64 see:
http://SetSail.com/fpb-64-theory-reality-2