Simon Rogers Cutter Rigged One Design, SONG OF THE WHALE – as of 11/2021, is now for sale. Further details available at https://www.berthoninternational.com/yacht-sales-brokerage/yachts-for-sale/cutter-rigged-one-design-song-of-the-whale/. 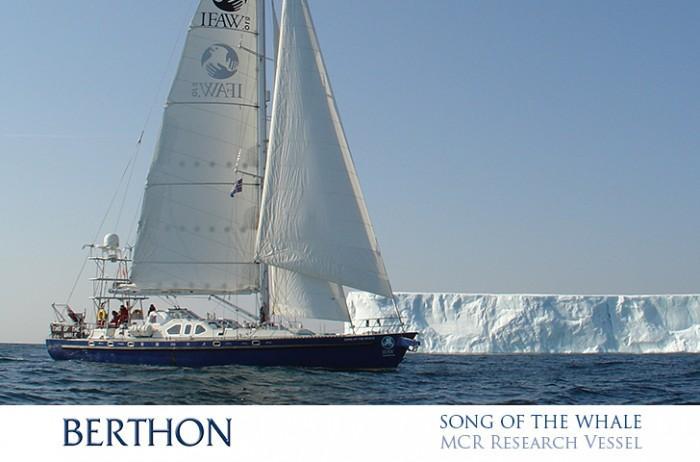 SONG OF THE WHALE is a striking 70’ custom built research vessel, who has been a familiar sight at Berthon since 2004.

Built locally to the thoughtful designs of Lymington based designer Simon Rogers, she is a 4 wheel drive, go anywhere sailing yacht of steel, which was commissioned by IFAW (the International Fund for Animal Welfare). 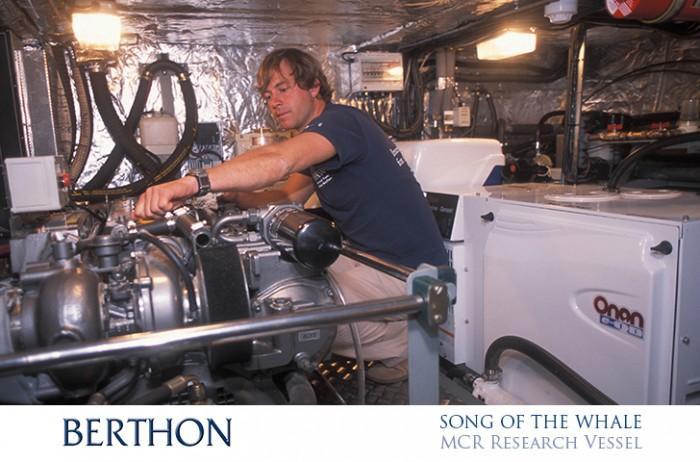 She is designed to be virtually silent (whales have good hearing!) and is perfectly set up to house the equipment and scientists required to undertake the important research that she was built to do. 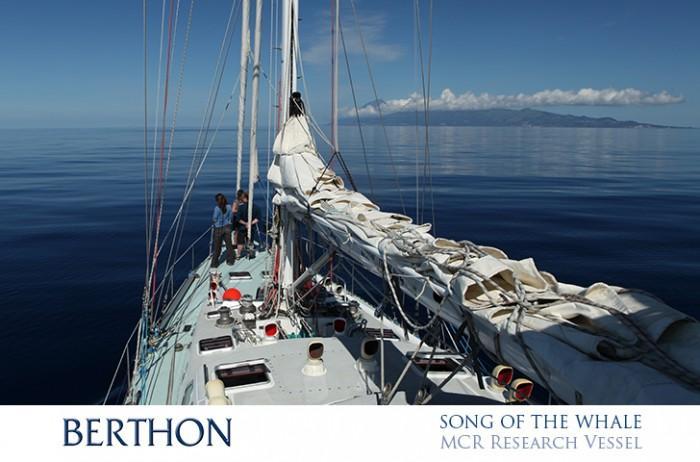 SONG OF THE WHALE is now owned and run by Marine Conservation Research, which in turn is owned by the skipper and scientists that worked with IFAW to make SOTW a reality. An incredible resource and force for good, Berthon are working with them to promote their recent projects, and those currently on the drawing board, for which funding is needed to make them a reality.

A bit about SONG OF THE WHALE – 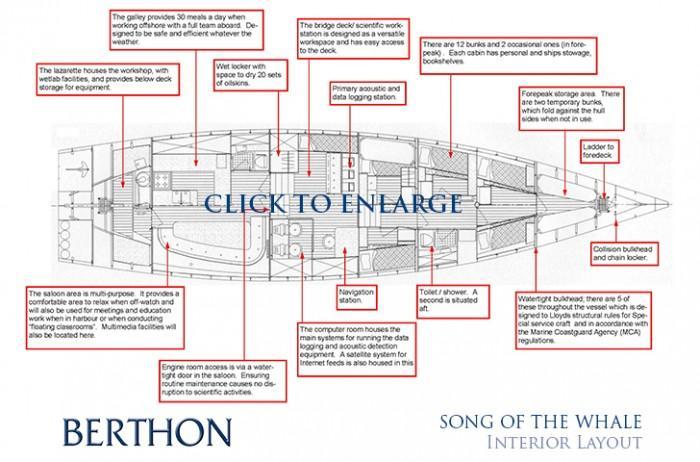 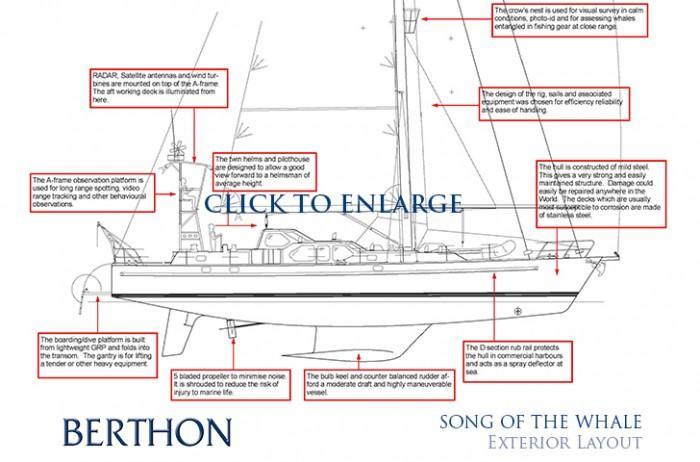 As one of the quietest research vessels in the world, she comes with a 5-bladed propeller, vibration dampening mounts on the engine, sails whenever possible and can remain offshore overnight and for extended periods during surveys. 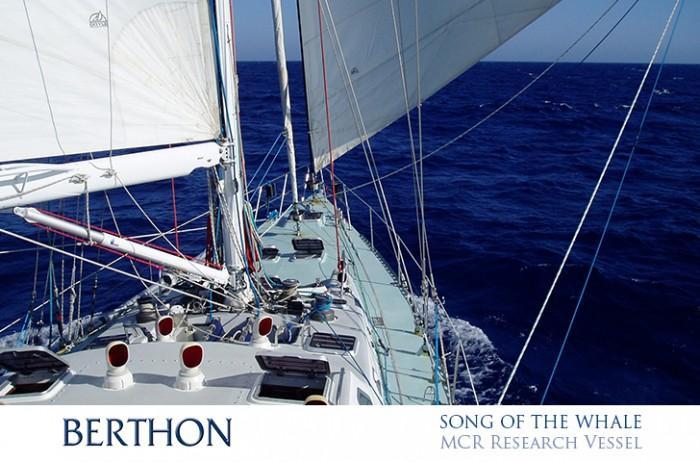 She generates electricity from wind turbines, remaining self-sufficient for over a month if needed.

Her crew are highly-qualified and experienced in marine mammal science, and boat handlers, which facilitate effective, safe operations and efficient, consistent data collection.

They are also thoroughly good eggs that are fun to work with and totally committed to their work.

This is what they’re up to at the moment – 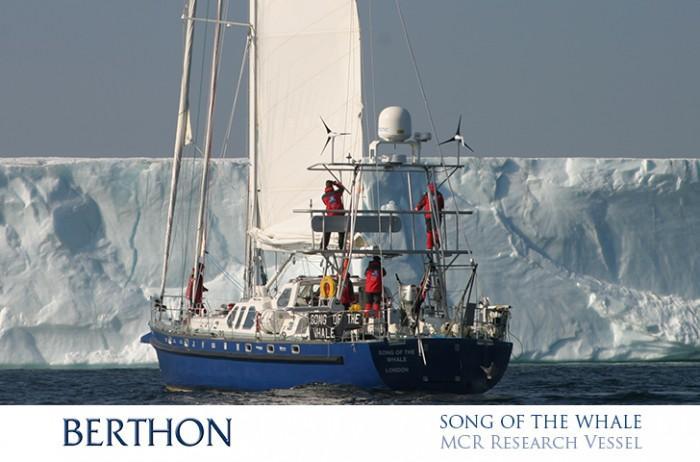 Polar species face multiple challenges, in addition to impacts from human disturbance, resulting from a rapidly changing climate. Critical habitats in extreme environments are altering, with significant implications especially for those species that are closely associated with the ice edge, as food webs change. They face increasing levels of underwater noise and volumes of shipping from improving human access due to ice retreat. They may also potentially face increased competition for prey with seasonally migrant species that remain in polar waters for longer periods; in some areas, there may also be increased levels of predation. Examples of MCR’s planned projects in Arctic waters include:

In addition to identifying potential threats to vulnerable populations of cetacean, the MCR team actively engage in advocacy and the development of conservation strategies to protect these iconic species. Examples of MCR’s planned projects include:

The offshore capabilities of Song of the Whale allow our research team rare access to some of the world’s most inaccessible and inhospitable marine habitats. We hope to exploit this unique opportunity on future projects including:

Saving the UK’s mega-vertebrates; discovering our threatened cetaceans (whales, dolphins and porpoises), basking sharks, seals and turtles. It is surprise to many people that they even inhabit the waters around our shores. Listed as priority species by the UK Biodiversity Action plan, they are the most threatened and require conservation action¬. New UK and EU marine legislation is due to be implemented before the end of the decade; This provides a critical timely juncture; novel information on the distribution of UK species and the threats that face them will help guide the development of future national monitoring schemes and inform effective species and habitat protection. A range of outreach activities will raise awareness of the presence of these astonishing animals, and inspire people to engage with, and support better protection of their natural heritage.

SOTW is currently in her home port of Ipswich undergoing maintenance whilst the Team continue to develop project plans and to make funding applications, in addition to working on a series of expeditions for the new season. 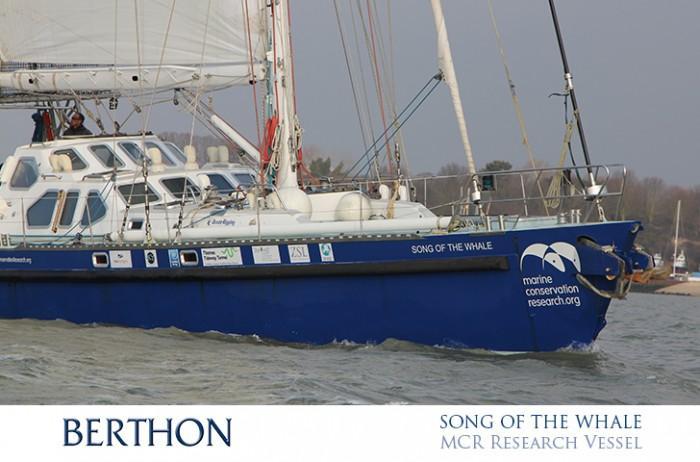 They are looking for partners to work with them to assist with some of the projects that are currently at the planning stages.

There is of course the chance for bespoke sponsorship, as well as participation in important conservation projects so that SOTW continues to put miles beneath her keel, and to make a difference to the well-being of our marine environment. Although primarily focused on cetaceans (whales and dolphins) there is much more that needs this remarkable boat’s help. 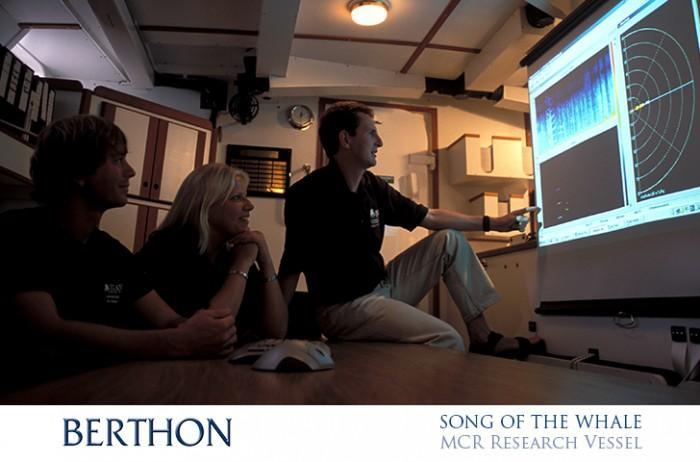 For the first time in 2016, SONG OF THE WHALE will be offering charter places on board to enable you to see some of the wildest places on the planet at first hand and to participate in a very unique way, in the yacht’s work.

There may also be opportunities to join SOTW during positioning voyages between projects and on occasion there may be chances to join during a research project.

Berthon will be following SOTW during the coming months, so look out for the blog.

If you would like to know more about this epic boat, the project or the extraordinary people who run her – contact sue.grant@berthon.co.uk.