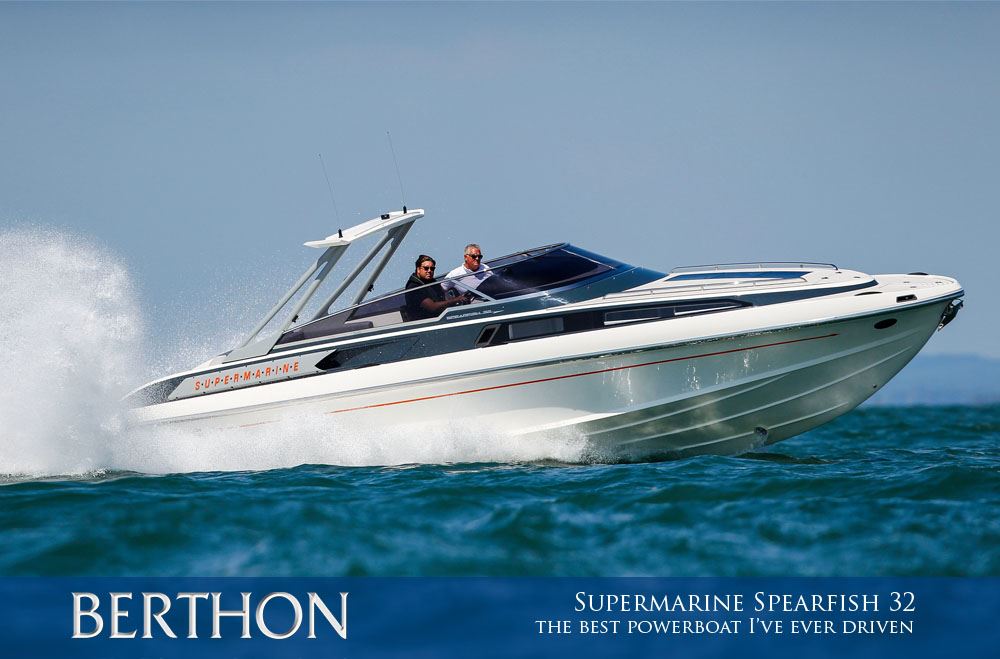 The saying goes “never meet your hero” – so I guess for me it would be “never drive the Spearfish”. Having become involved with the great set of people at Supermarine, who are building the all-new Spearfish 32, I received a brief email from their Production Manager inviting me to be “ready on the dock at 10:30”. I wondered if reality would meet up with expectation; and so I set out in the trusty grey Passat for Itchenor, with a bag full of wet weather gear…

The balmy early August weather was having a bit of a twitch, and literally the moment I stepped on board, the heavens started to cry. This was the second Spearfish 32 which Supermarine have finished – and in colours not for the faint-hearted. Her Scandinavian Owner has matched her topsides and superstructure to his sports car, Blackberry Red setting off a funky green colourway for her hull – so she is no shrinking violet under her Anthracite Grey radar arch. To say she is striking in the water is perhaps a little under-valuing how cool. Low-slung and purposeful she looks. With a hunched frame of a sprinter at the blocks, there is no mistaking her provenance underneath that highly-polished stainless steel rubbing strake.

The glassfibre Spearfish 30 evolved from her earlier hot-moulded mahogany siblings, with a razor-sharp deadrise stretching forward into three spray rails and a stiffening chine – and it is the progeny of that same mould which now lies tantalisingly on her lines at Northshore’s pontoon in sleepy Itchenor.

The purpose of today is to set up her engines, check and log back pressures, check trim settings and shake her down with a few high speed runs, and so we fire her up – her Spitfire-style exhaust stubs promising some fairly exciting performance. Slotting easily into gear, we head away from the dock and stow fenders and lines. The fenders are on easy push-button lugs – so no warps to undo – all very easy, and her SeaSmart cleats drop into their housings with a satisfying swoosh. All super easy and well thought-out. Lots of engine diagnostics to have checked out by Yanmar, so we don’t have the engine hatch quite closed, so there is a rorty buzz coming from the engine bay, where a pair of 370s are rumbling away – pushing up down a damp and drizzly Chi Harbour. 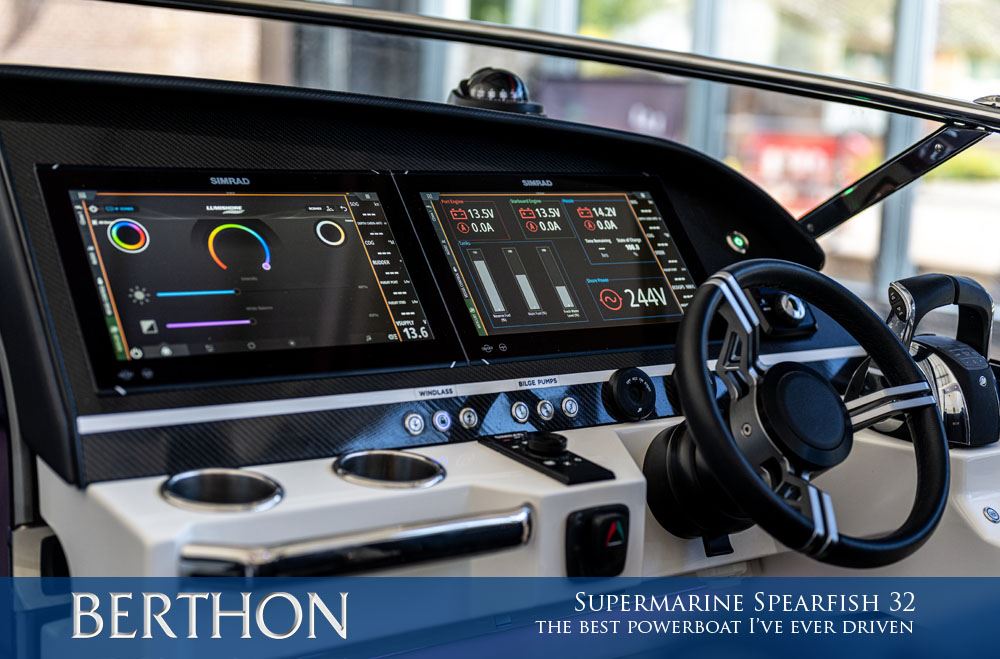 Leaving the Winner Bank behind, the engineers thumb up and ask for more revs, so we punch up to a near instant 24 knots and an indicated burn of 54 litres per hour combined. We are running heavy, with five persons on board and near-full tanks, but the trim is sublime as the hull is shoved forward, with no discernible bow-rise and just wider smiles. Through 30 knots, all pressures good, 38.9 knots gives 100 lph and the boat feels as if she is standing still in the water – there is no sensation of the actual speed we are travelling at – just the raindrops hardening into tiny balls as they ping of the low screen. Zero vibration, zero rattle and just an immense solidness. As we back off from a brief spurt at 45 knots I am handed the wheel, or rather I slide into the helm position. It’s tight, it’s enveloping, kind of a wrap-round sports-car hug comfy. The throttles are perfect for me, with an adjustable small sports wheel and wonderful support from the SHOXS seats. I choose to stand, ask the crew to hang on, and throttle up. 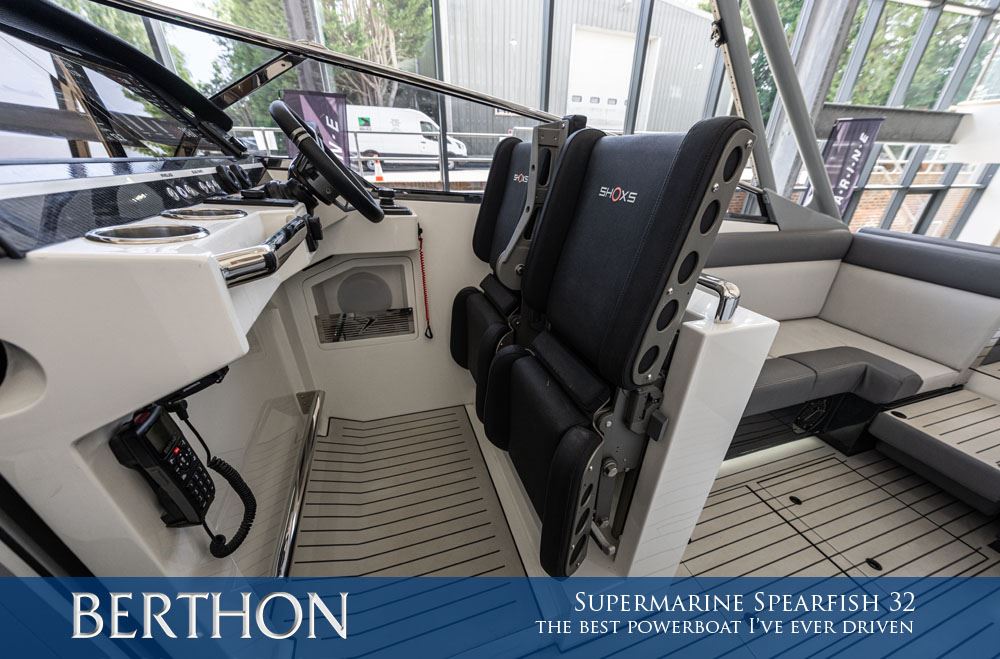 Crikey! Now I’ve driven a few Spearfish of the shaft-drive variety, and this is a very different experience. The Spearfish generally had a brace of Perkins 145 diesels to hurry her along, with a decent down angle to fit the drive-train in, and her belts spinning a fair way forward under the cockpit hatches. This thing has a twin set of duo-props right at the transom, with lightweight electronically-injected 370 diesel V8s (weighing in at c.400 kg less than the Perkins pair) set well aft. So the acceleration pushes you firmly into the backrest as the needles climb and the turbos spool and spin up. With massive mid-range torque, the launch is rapid, and continuous. The bow just refuses to lift. The horizontal thrust from the props just sling-shots the hull forward – unlike any other hull I have driven of this type. No fuss, no difficult trimming, just a wholly composed hull doing exactly what it always has (since 1969). She is mighty impressive. 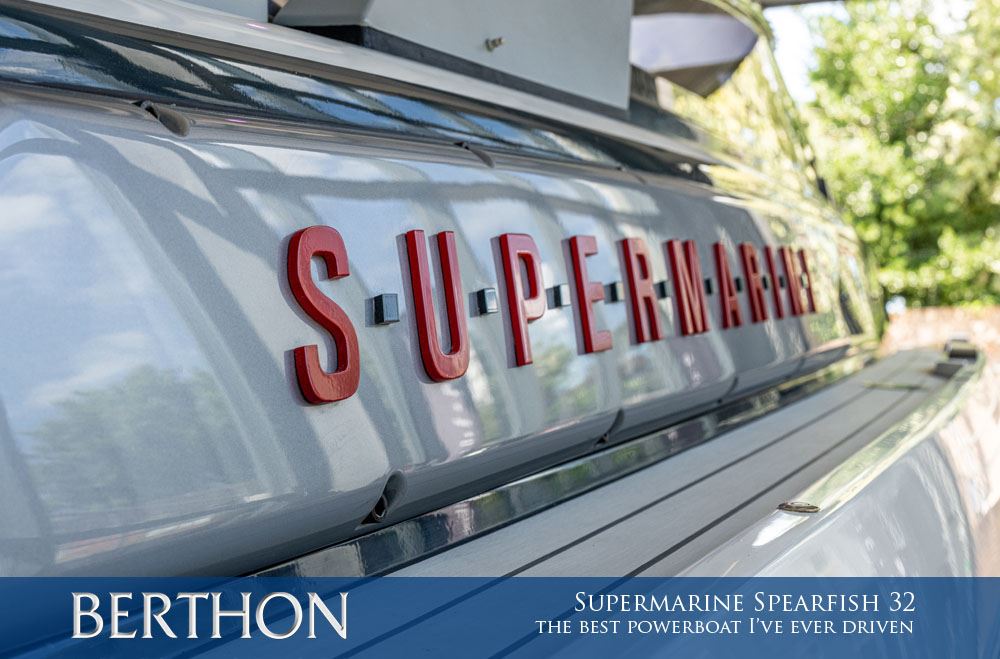 Winding the wheel over, the rails bite and the Spearfish banks into the turn, carving as hard as you want. No step out – no hint of slide – just a neatly radiused arc through the water, and with no rudders to brake the water flow and masses of power in reserve, she feels alive yet completely controllable. In other words, this is a very hard beast to wrong-foot in any way. I am lucky and privileged to have driven many boats over the years: fast, slow, jet, full-displacement, semi-displacement; and they are all different in character and most, thankfully, are very proficient at their job. However, this is just streets ahead in the grin stakes, the “E-Type” factor, the modern classic category… She is, pound for pound, the best powerboat I have ever driven. 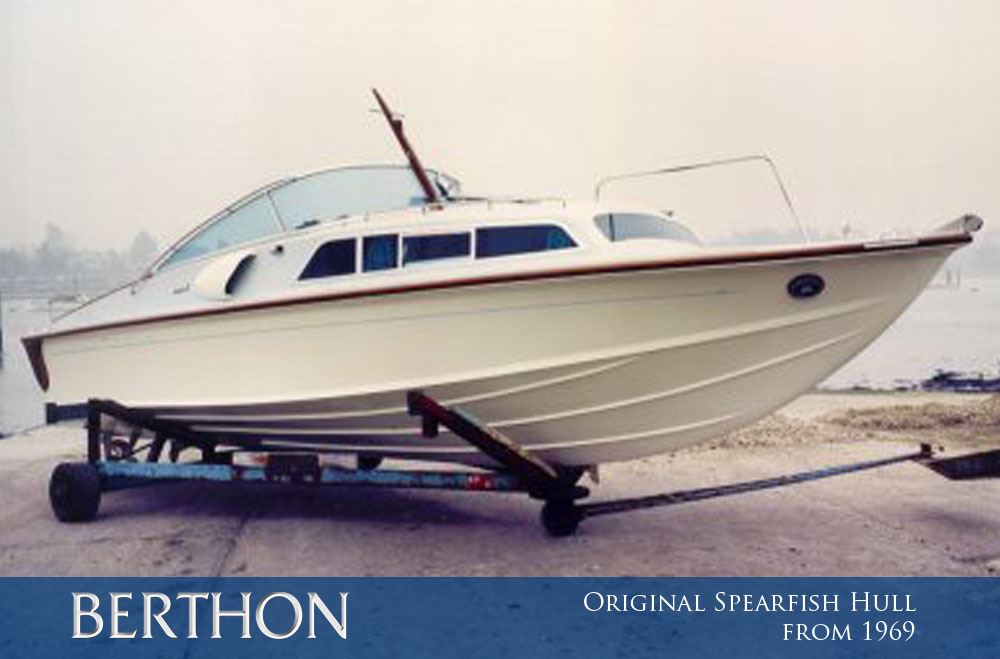 Supermarine Spearfish 32, 32.001 is for sale with Berthon. Her full sales particulars can be found here: https://www.berthoninternational.com/yacht-sales-brokerage/yachts-for-sale/supermarine-spearfish-32-32-001/.