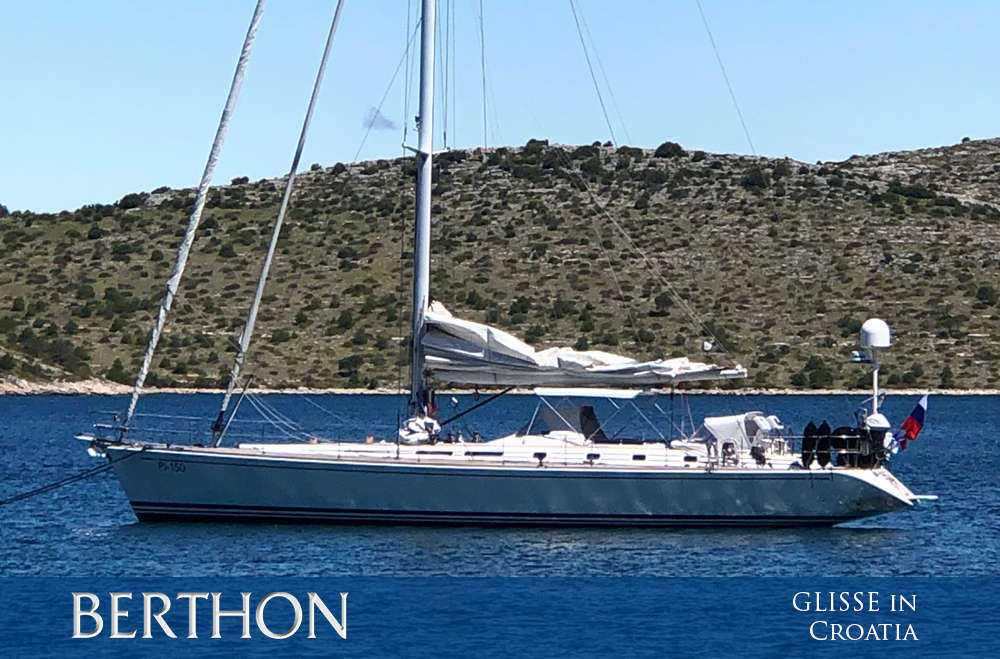 Let’s face it, when you are on a Swan 62 sailing in the beautiful waters of Croatia, there is not too much wrong in your world. GLISSE is now based out of Šibenik, at a brand new luxury marina, Mandalina Šibenik – complete with all the dock support services you would require, including the grocery store/wine shop. Having sold GLISSE to her current owners last year, I was invited to come and sail her for a week, and preview the charter experience that would be offered to other avid sailors. Our sailing area was in Central Dalmatia, which produces the country’s best wines, olive oil and prosciutto! The area between Split and Dubrovnik is also a great cruise, but having done that area two years ago, the plan was to see something new.

Our crew was standing by ready for our arrival, fully stocked and ready to go. Sebastian and Ambro have worked together as a team for over 10 years, and it showed. Not only do they run charter boats, but they also organize and run various regattas around the Med and Adriatic. They were very good at sensing what the guests on board would like, and each day and evening they were able to come up with different suggestions for us, all of which were right in line with our thoughts. Our instructions had been to do “local” as much as possible, as far as the foods and wine were concerned and to explore off the main tourist track.

Our biggest problem was the rain for the first three days! Saturday evening the crew had arranged an outing to a very local restaurant, fantastic, and as we were at the end of a long day of travel, it was nice to be in a quiet place. Sunday morning we woke to basically torrential rain, so off we went with our umbrellas, into the old town of Šibenik and made the best of the day. Up to the top of the town to the 16th century fortress we went, the ticket taker looking at us like we were nuts, then back down to a lovely café where a long lunch was in order!

When we got back to the boat, Ambro had made us a traditional Croatian stew, had the heat on, and since we were soaked, it was the perfect comfort food. The boat is equipped with satellite communications/internet, so a good movie was in order, as none of us wanted to go back outside.

Monday the suggested itinerary was the waterfalls in Nacionalni Park Krka (National Park). The problem was the bridge we had to go under, and Sebastian was not quite sure of the air draft. But yes, Jennifer had her phone, did a quick email to Lars Strom at Nautor, and within ten minutes, we had an air draft measurement of 27.2m! Of course, there seemed to be some major reservations from Lars, as the next email was detailing how to maximize heel and save a meter. We did decide to go by car, to which Lars replied “good idea”! 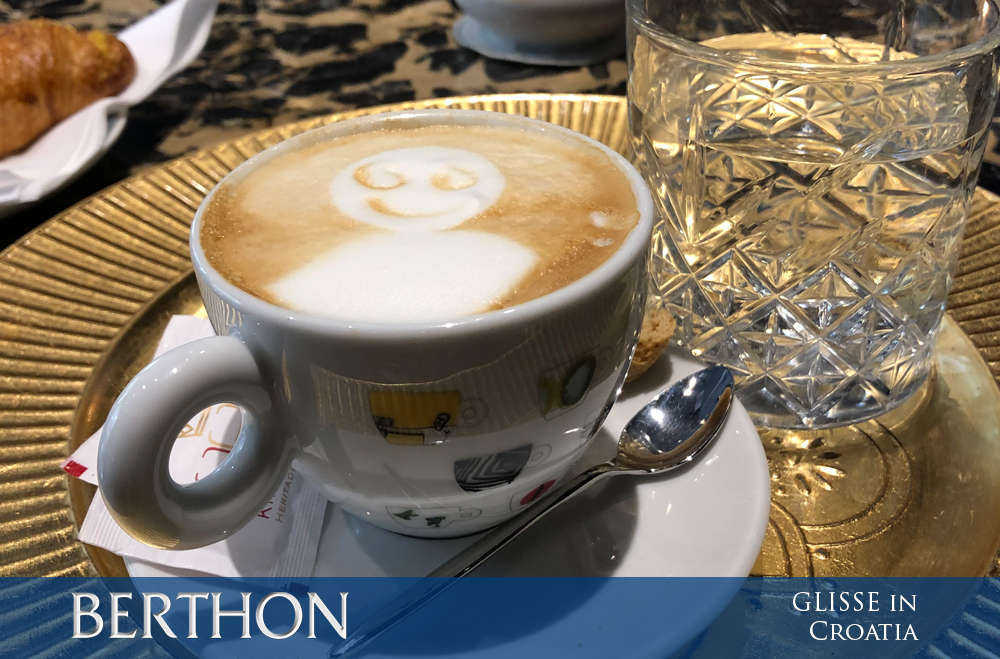 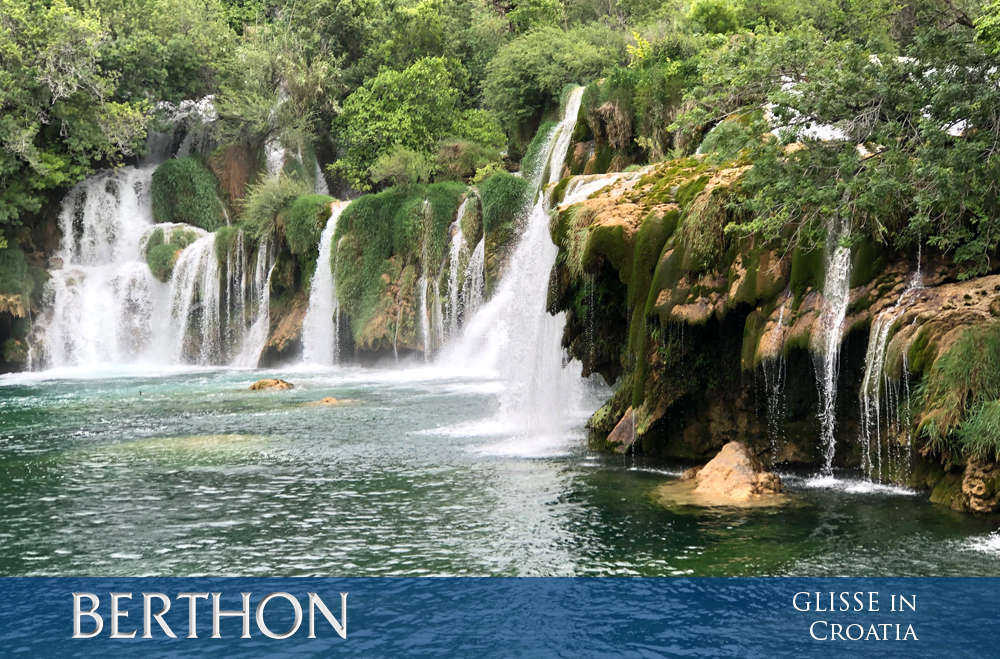 The waterfalls were great, and well worth the trip. A ferry takes you in to the area, and then paths have been erected around the falls so that you are able to see most of them.

It was loud, as with the spring thaws, the water was rushing down the mountains. In the still spots, you could see fish, lots of bird life and lovely water irises. The guide books will tell you that there are more than 860 plant species and over 200 bird species living in the Falls, making it one of the most valuable ornithological areas in Europe.

We then headed off to a local farm/restaurant in the country, where the owners have built a replica of an old home, AROCA, and are in the process of farming/processing their own Croatian prosciutto, which was SO GOOD! BBQ pits and tables under the olive trees, stone courtyards and as the Captains of the port, complete with gold braid showed up at the same time, we were able to sample the iron bell cooking, PEKA, which buries the meats and vegetables in hot coals for a slow cook that is “must have” on the menu in Dalmatia. 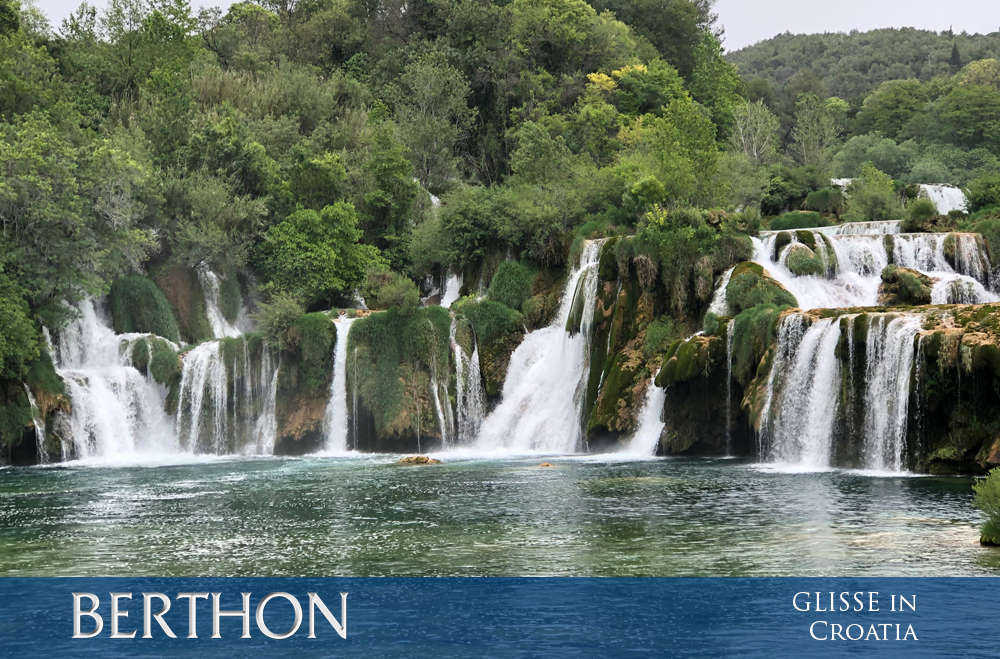 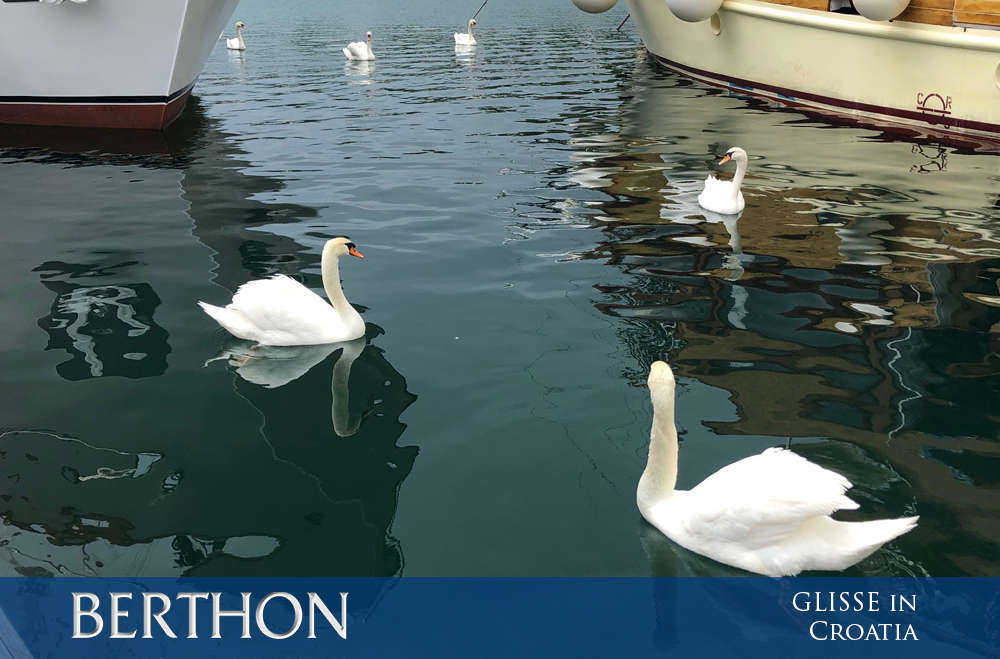 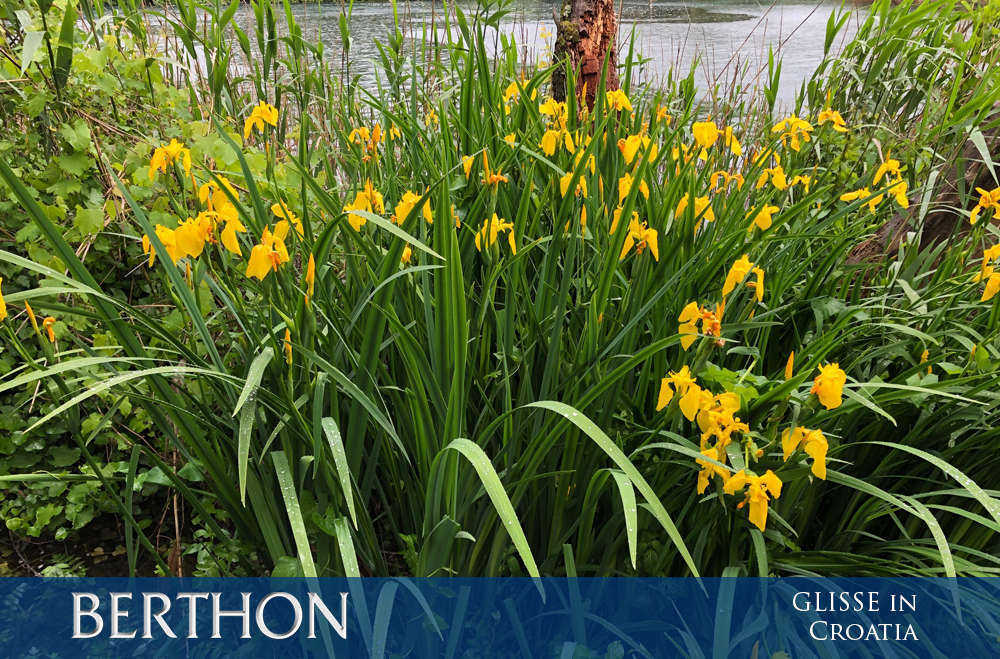 Next day off to Split, home of the ruins of Diocletian’s Palace with the ancient walls and towers to climb, and Trogir, which is an UNESCO World Heritage site.

Of the two, we definitely preferred Trogir, which is a beautifully preserved medieval village on a huge canal, with two very large marinas across the bridge, and numerous restaurants on the water.

Ambro took us to their favorite pizza spot for yet another long lunch. Back to the boat with hopes of a clearing sky. The dinner on board was an excellent pasta dish with local cheeses and of course, yet more local wine.

FINALLY, the sun arrived, on went the engine and out of the port we headed.

Have to say being down below, you have no idea that the boat was even moving, and we popped up just in time to catch the view. 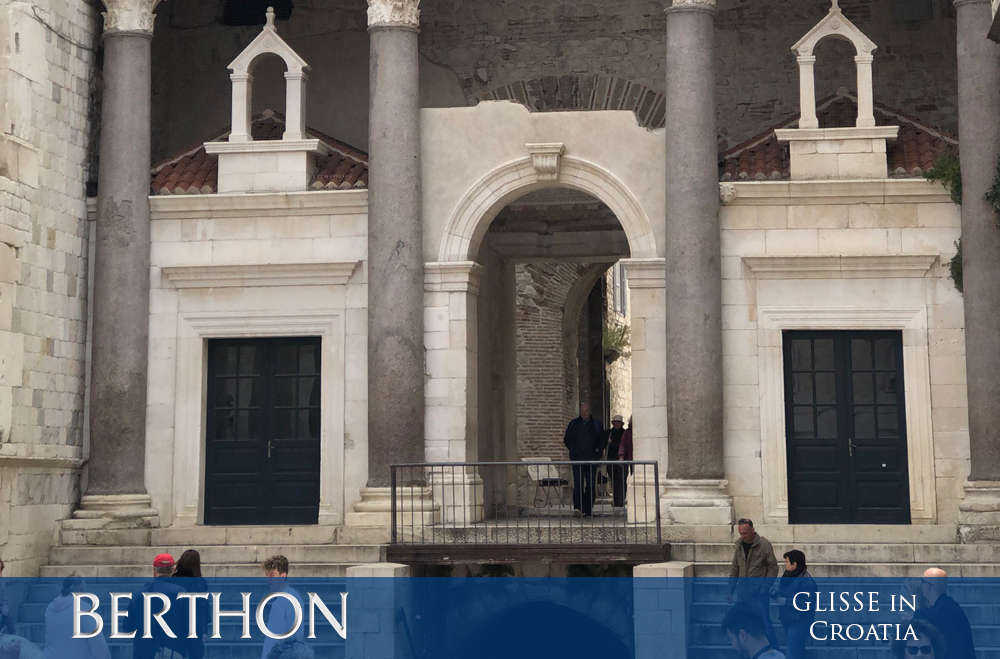 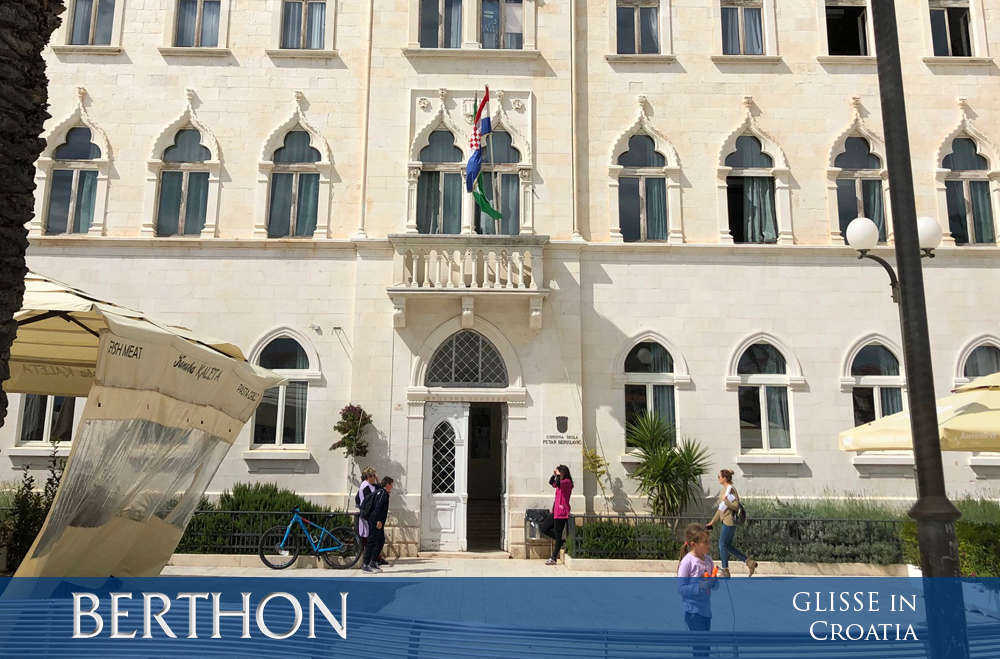 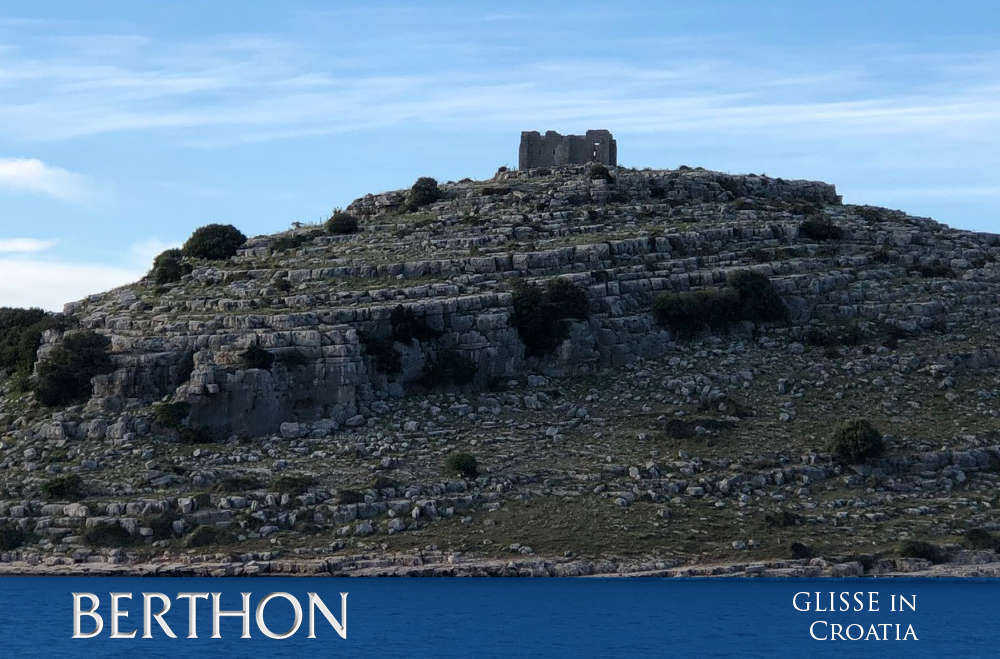 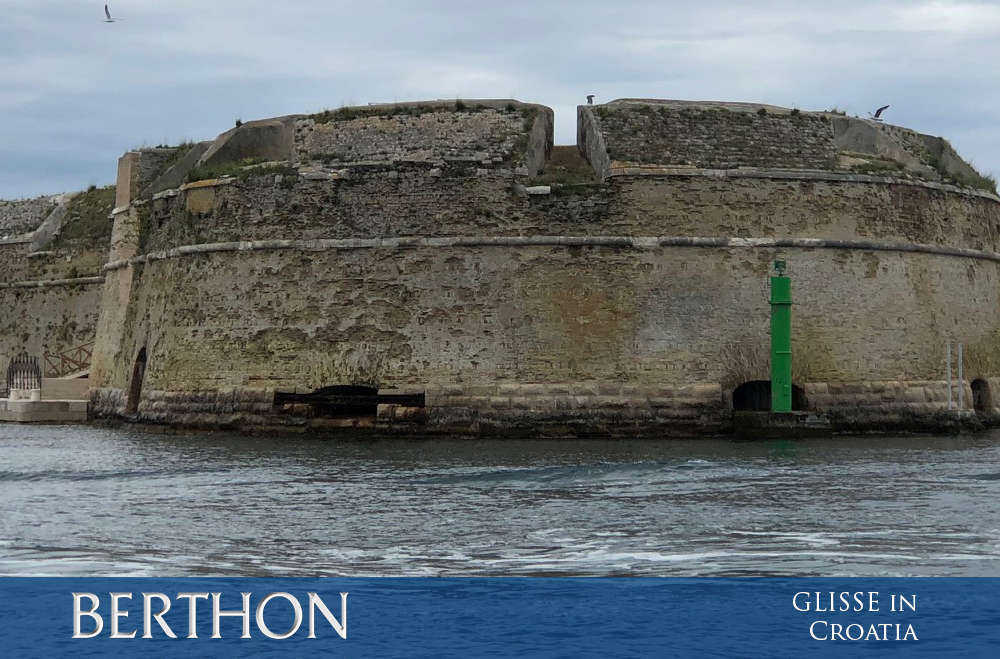 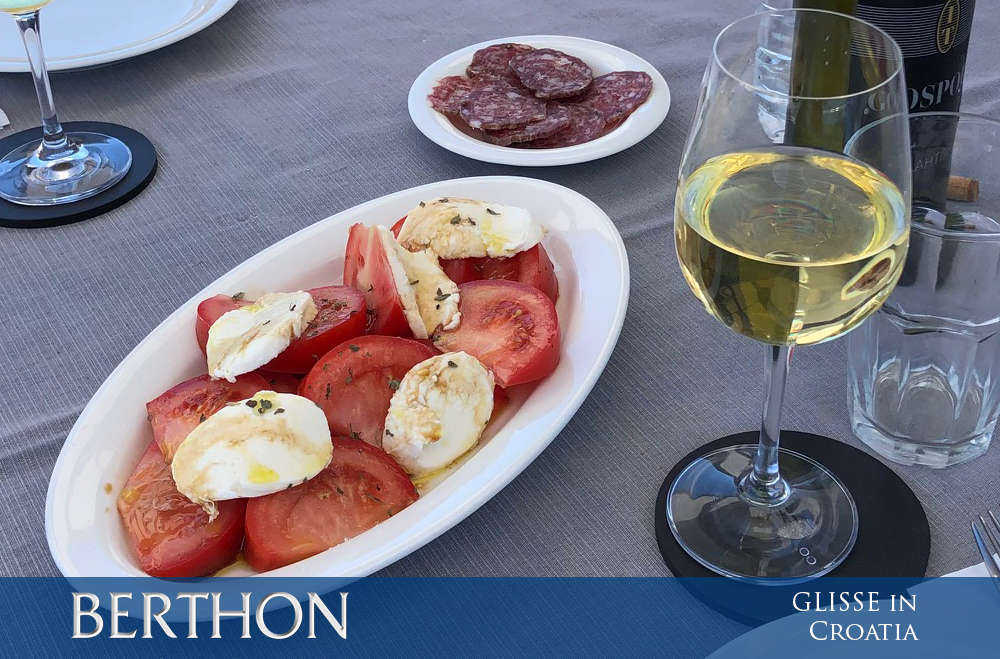 Our first stop was a small island called RAVNI ŽAKAN, where we climbed the hill for a spectacular view of the islands, then a quick lunch on board.

What was so nice was that we were ahead of the season by about two weeks, and so it was very quiet, we were often in company of only one or two other boats. Then off to LAVERNAKA, one of northern islands in Kornati National Park chain, the largest archipelago in the Adriatic, with about 100 islands. Most of the islands are completely deserted, except for a few that are used to raise sheep, or if occupied, maybe 4-8 people there during the season who have amazing restaurants. If you eat in their restaurant, dockage was free of charge, a rather pleasant bartering system. Another hike over the island top and down to a lovely little beach on the other side, great to stretch our legs before dinner.

Perfect sail on Thursday to National Park TALAŠČICA or Long Island (named as approx. 45 KM long), the wind was just right, and into the harbour we pulled. Definitely a more popular island with small ferries arriving from Murta, with day trippers to climb up to the cliff face and back down to the salt water lake in the center of the island. Rowing into shore because we were too lazy to launch the outboard was probably not the best idea as the winds decided to pick up right at that point! The cliffs were spectacular to say the least, and seeing shell life in the middle of an island lake was very unusual. 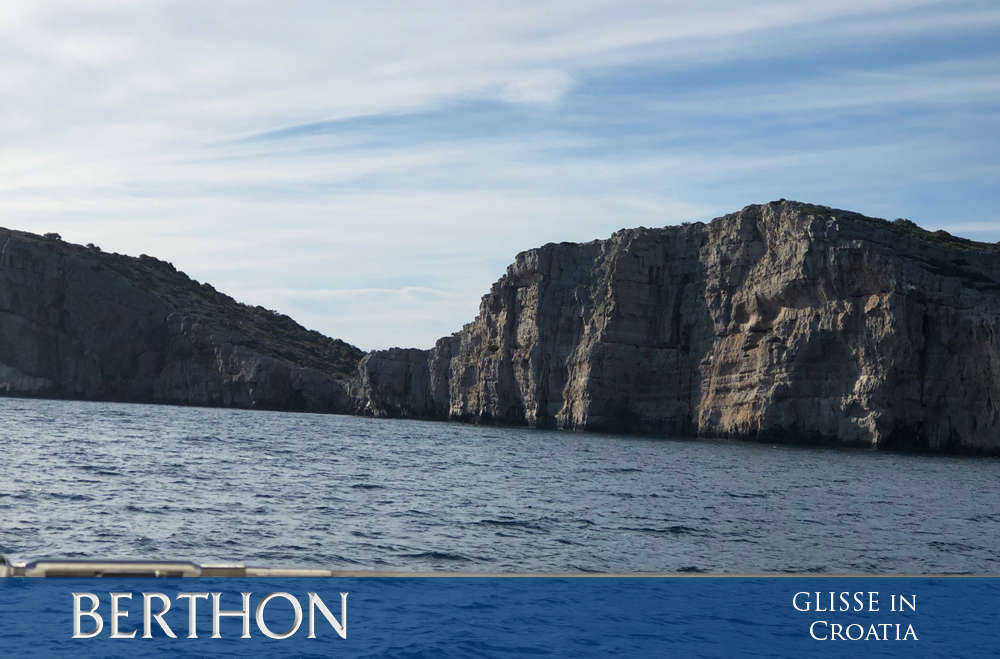 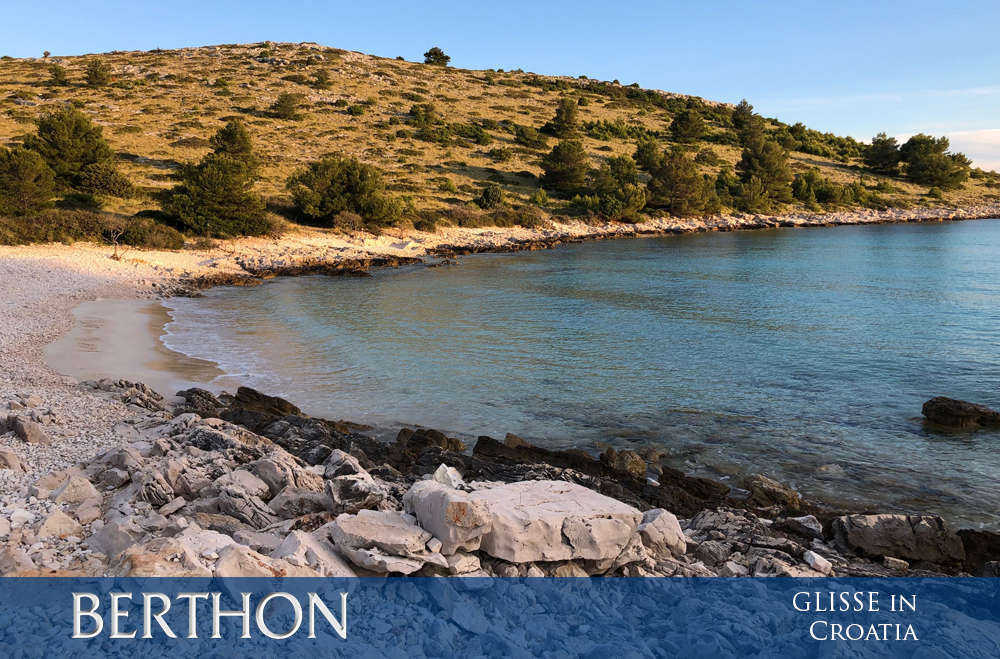 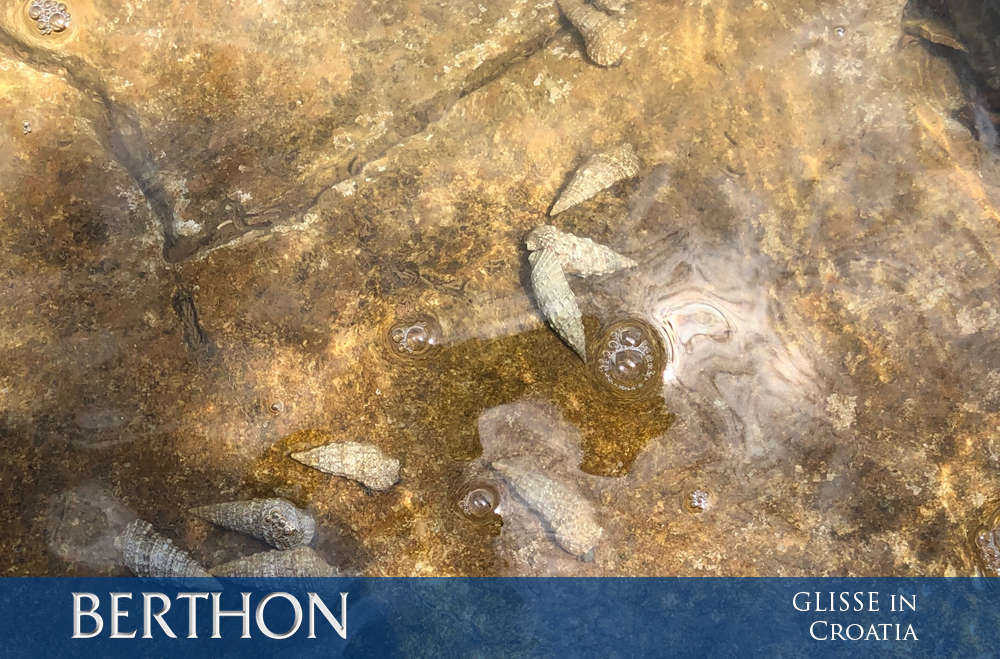 Great lunch in the cockpit, and a downwind sail to a very deserted anchorage on KAPRIJE inside a very picturesque bay KUNKA and another enjoyable evening on board. 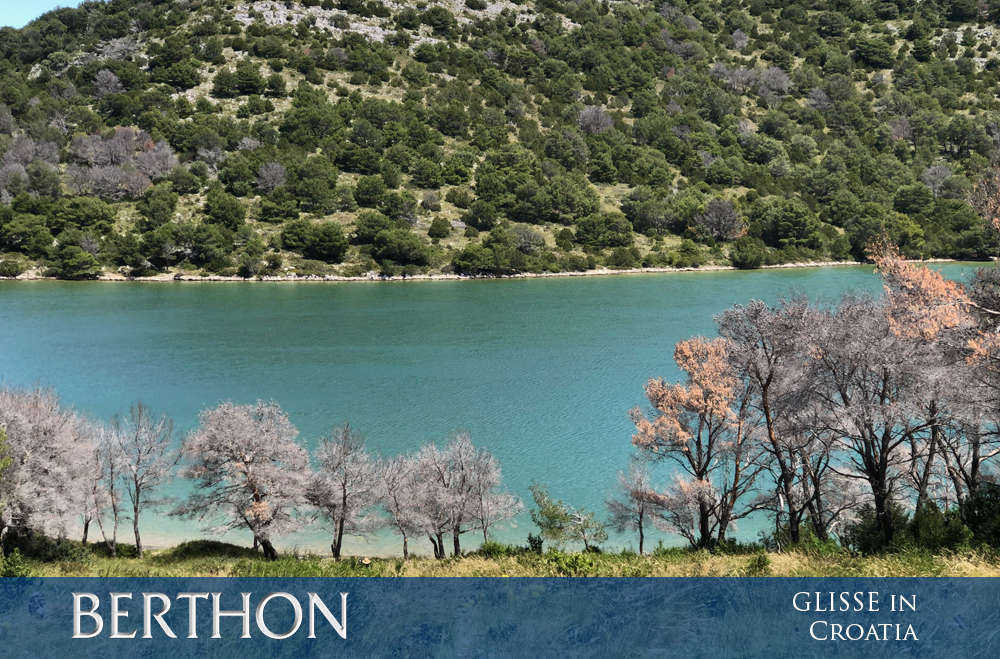 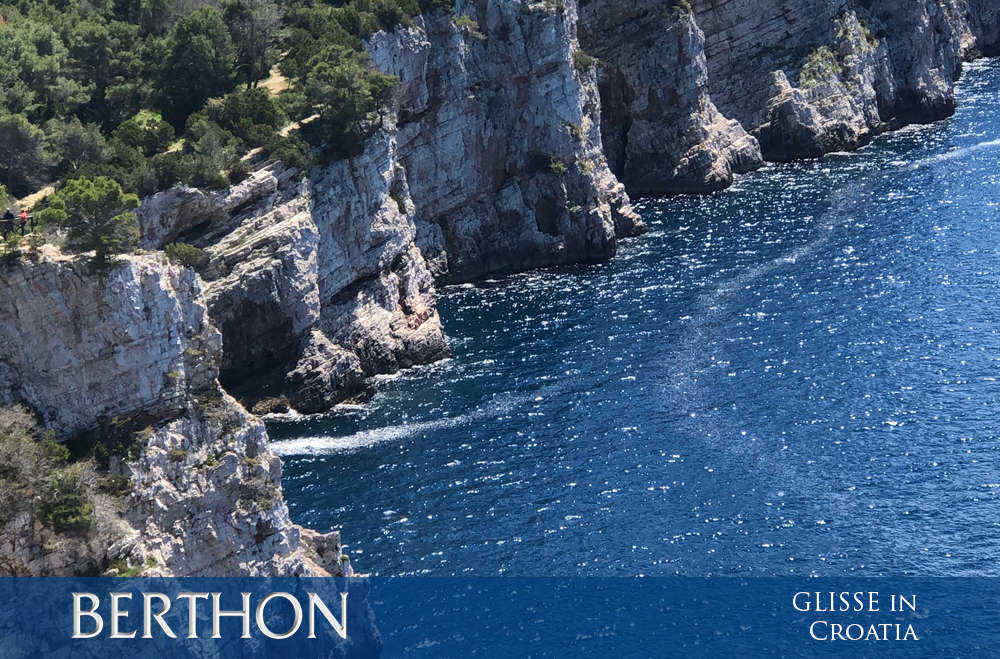 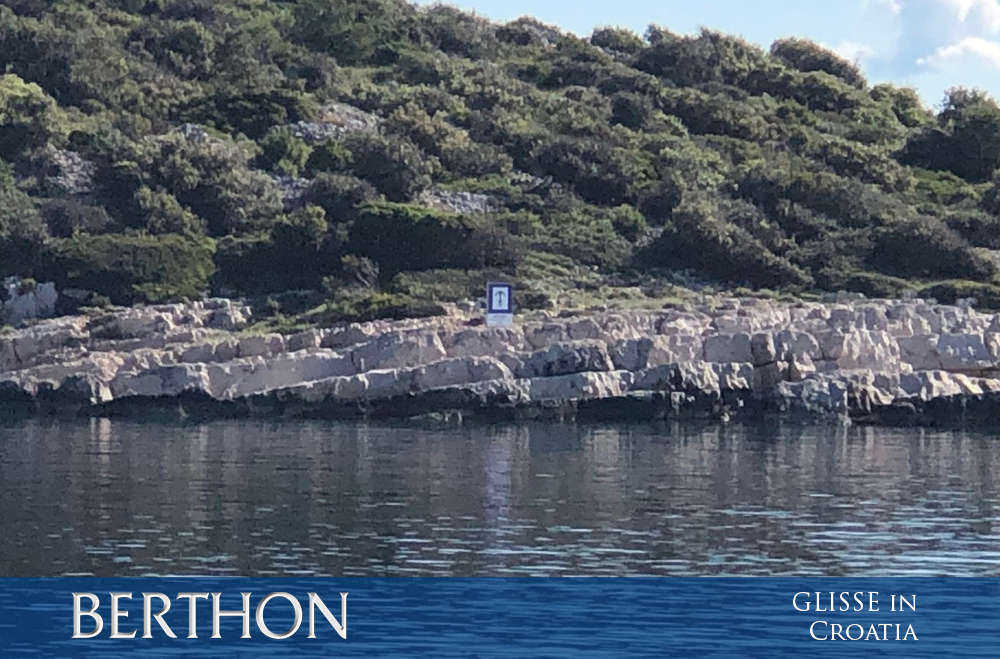 Our last day of sailing – ZLARIN or Coral Island, an absolutely immaculate island, every home with gardens and fresh paint, and a great lunch spot on the docks. We had to wait for a turn to get into the dock, but the anchoring system is so easy on GLISSE that it no problem to drop and raise the anchor.

Then back to Šibenik and the arrival of the Oskar and Petra, who have done such a great job refitting GLISSE. We had the evening to catch up on news, had a lovely dinner in the old town and then off to the airports in the morning, reluctantly saying goodbye to GLISSE.

Having sailed GLISSE in New England and the Caribbean with her past owner, I will admit to a certain fondness for her, she has been the source of many happy days on the water. Croatia is a fabulous place to go for a sailing vacation, as it is easy to island hop, with the chance to mingle with the locals and feel the years of history that we do not see here in New England. Would highly recommend that you take an opportunity to sail on board GLISSE and experience it for yourself. 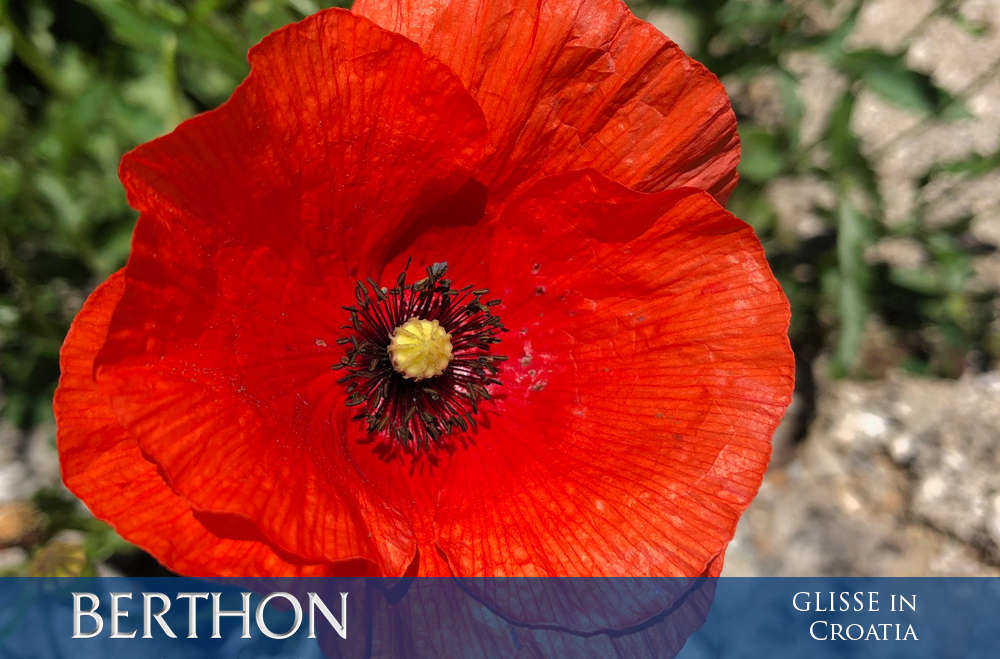 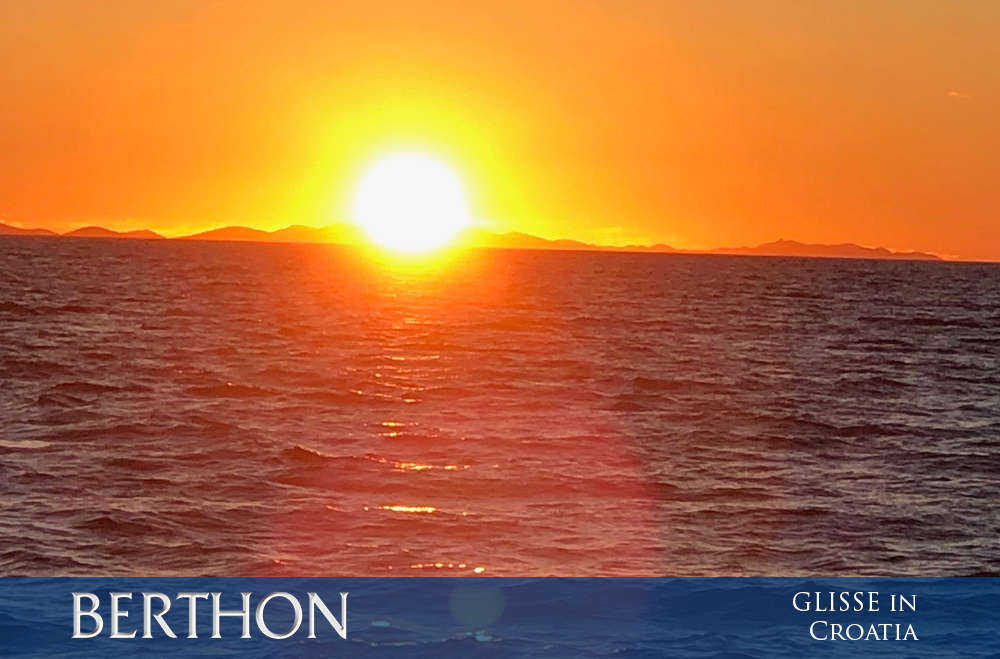 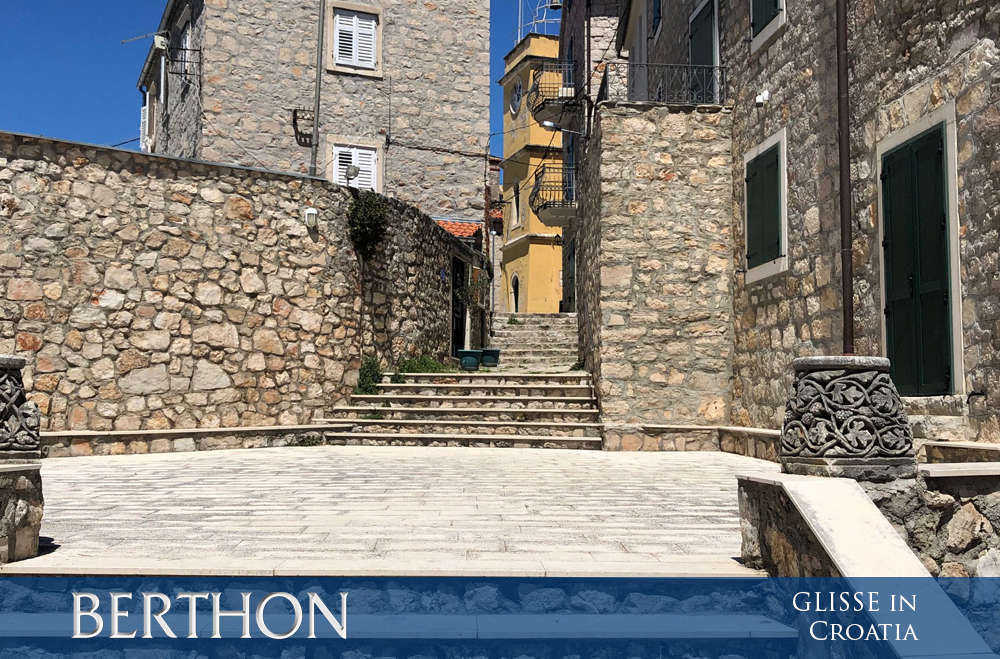 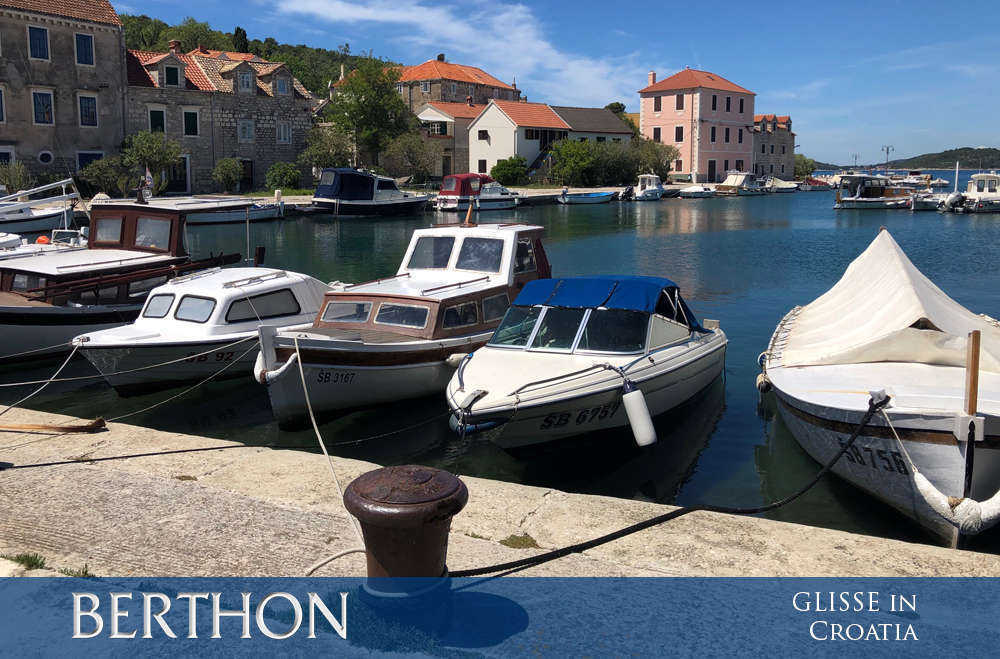 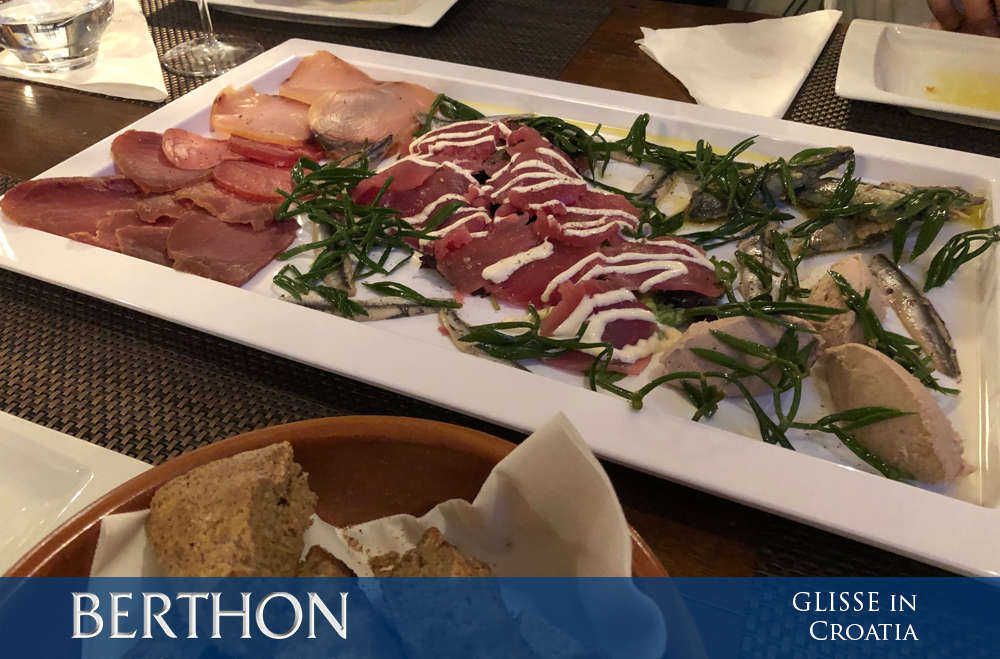