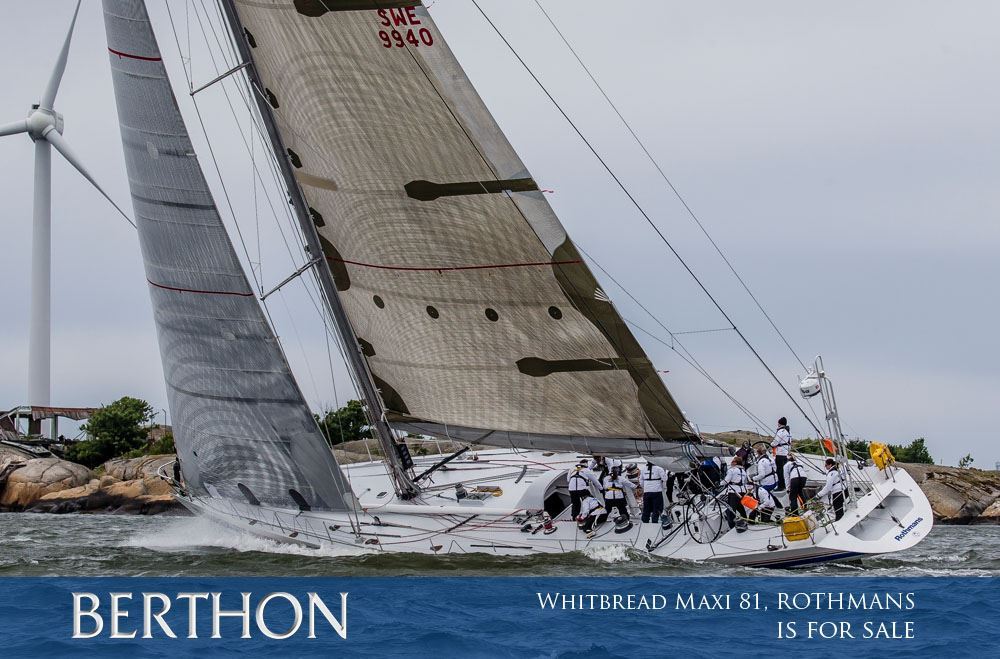 Whitbread Maxi 81 ROTHMANS was originally a British maxi yacht, skippered by Lawrie Smith, designed and built for the Whitbread Round the World Race 1989-90. She originally sailed with a crew of up to 16 and finished the 1989-90 race in fourth place overall.

Built by Paragon Composites to a very high tech construction at the time, using variable density Divinycell, from H80 to H250, as you might imagine It’s a very complex laminate, with a hybridised laminate of carbon, Kevlar and E-glass. All was to ABS Plan Approval, and not surprisingly she was a high budget and well researched yacht. 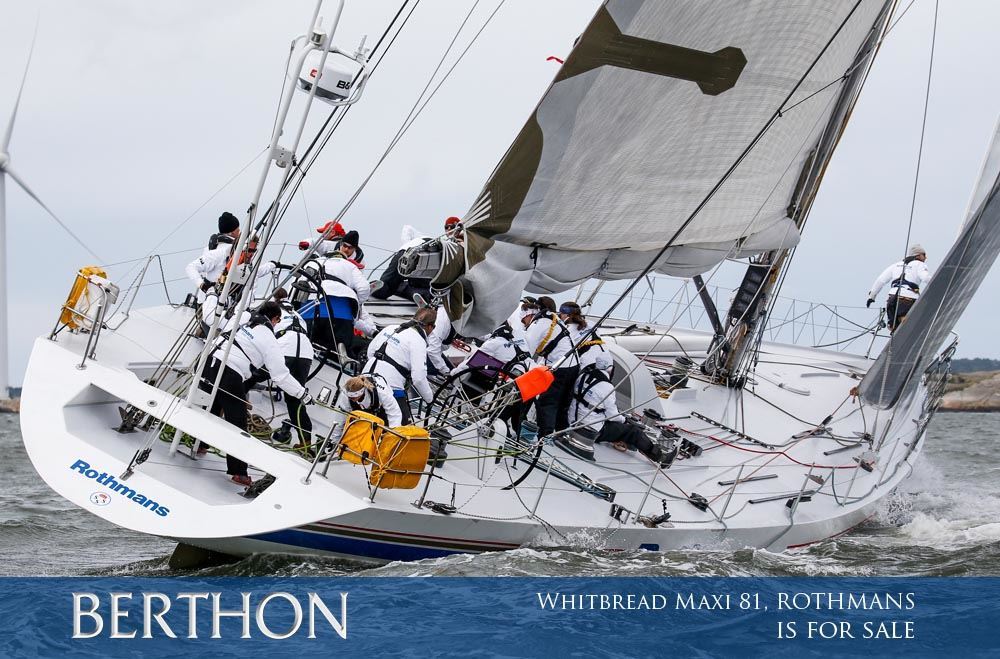 Early signs were promising, but she could not hold back the ketch configuration of Steinlager and Fisher & Paykel, and duelled with her similarly rigged rival Merit until the end.

One of the most outstanding moments in the race, was in Leg 2, from Punta del Este, Uruguay, to Fremantle, Western Australia. Although Steinlager 2 won every leg of the 1989-90 race, the battle on this leg for second, just an hour and a half after Steinlager 2 had claimed line honours, was an intense one and the duel between ROTHMANS and MERIT was fierce. At the final moments of the race, ROTHMANS overtook Pierre Felhmann’s MERIT, to come in 28 seconds ahead. 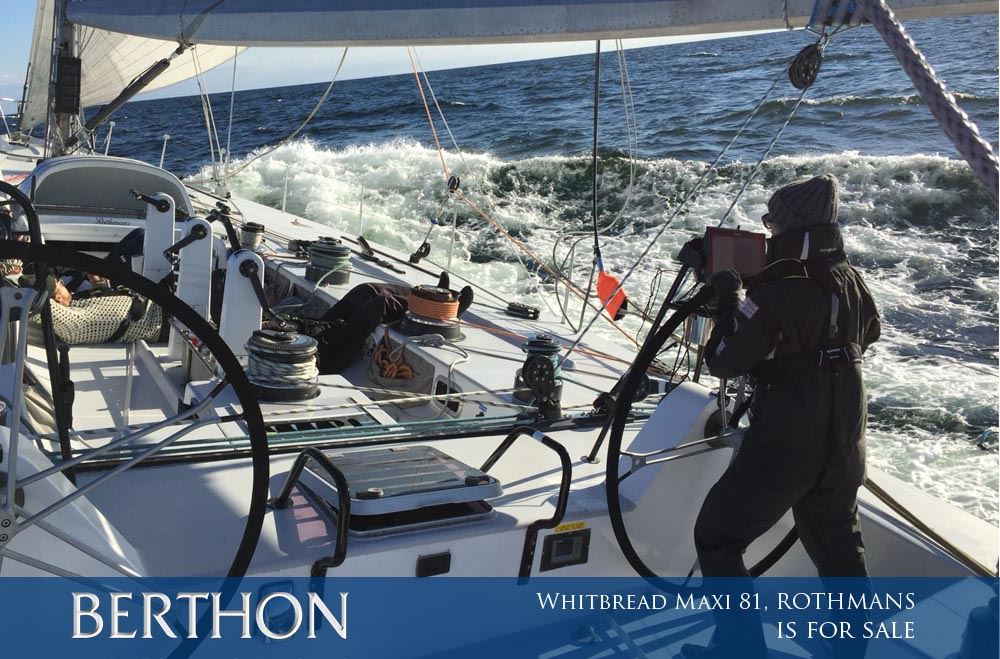 Since the race, ROTHMANS continued to race for a while, causing controversy in the Sydney Hobart race by flying a spinnaker with cigarette advertising (out of sight of any other yachts though) and despite winning the race, she was disqualified.

ROTHMANS had a full refit in 2011. Her hull and topsides have been fully faired and painted and she has a new suit of sails. Since then she has been used in the competitive Legends race alongside the Volvo Ocean Race and used for private pleasure sailing. 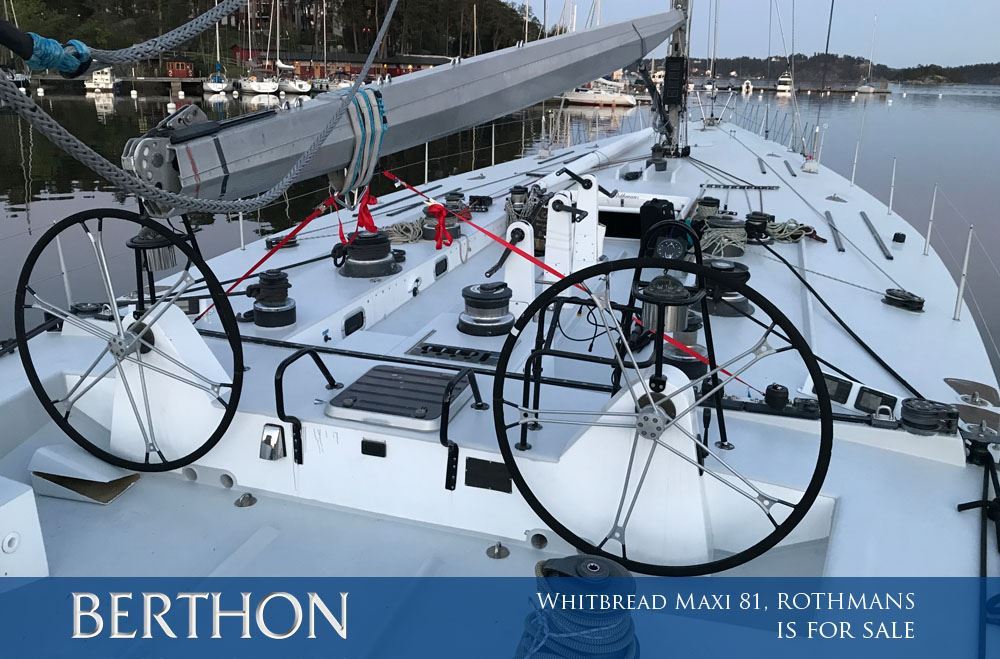 ROTHMANS is located in Sweden, and well maintained and cherished by her current owner. She is an outstanding yacht for adventure sailing, charter or just to enjoy sailing privately.

You can find her full specification here: – [OFF MARKET]

She is available now for review on the West Coast for Italy. For further details contact ben.cooper@berthon.co.uk.