Moody 64 MAISHA was built in 2003, designed by Bill Dixon, combined with the quality and craftsmanship of Moody. She offers a huge amount of boat for the money – providing potential for extended passage making and the ideal holiday yacht – plus charter potential.

The Moody 64 is a remarkably powerful boat, fully capable of fast passage times across a range of conditions. Her good performance derives from the way her Bill Dixon hull shape balances the power of the underwater sections and lead keel with the tall, high aspect ratio, cutter rig. Despite her size she is easily sailed by two persons – in part courtesy of the hydraulically powered fully furling rig, self-tacking staysail and powered winches.

The well finished teak interior designed by Roel Degroot sleeps six guests in three guest cabins and two crew in a separate forward crew cabin – plus a pilot berth in the “study”.

The vessel has been constantly well maintained and has a very full inventory – including generator, air-conditioning, bow-thruster, water-maker and more. The yacht had new standing rigging as at summer 2015.

Most recently she has undergone substantial refitting and improvement with a new teak deck installed in Turkey winter 2018-19. The yacht then sailed to Palma in May / June 2019. The owners enjoyed the yacht throughout the summer of 2019 and decided to then invest in further upgrades and with the idea to return her to commercial use and undertake some charter to offset costs.

That refit is now completed but with changes around the world and combined with personal circumstances the owners have decided to sell. The refit included major items such as: new head-linings throughout, new washing machine, new Raymarine instruments, new batteries, new deck hatches to the aft cabin, new fridge and freezer compressors, and a new liferaft. But also, a myriad of many details such as refurbishing panels in the aft cabin, varnish works, reconditioning of vang and furlers, reconditioning the hydraulic pack, reconditioning the toilets, deck painting …. and more.

MAISHA is British registered as a “pleasure yacht”.

VAT (IVA) was paid in Spain by the current ownership in November 2017.

The yacht was previously a “small commercial vessel” and a new owner could quite easily bring her back to commercial status if they wished.

MAISHA is a wonderful yacht for cruising. My husband and I bought her to live on with our young son and sail around the world. We named her MAISHA, which means life in Swahili. We chose her due to her quality build and generous space above and below deck. We had so much fun cruising the Mediterranean sea on her. MAISHA felt very stable during bad weather and made longer journeys pass comfortably. The generous galley and dining areas made cooking and eating on board a pleasure on nights spent in remote bays. There was plenty of room for our paddleboards etc. and we loved lying on the foredeck stargazing or lounging during the day under the sun canopy home schooling. Unfortunately, due to events our plans have had to change so we are offering her for sale. 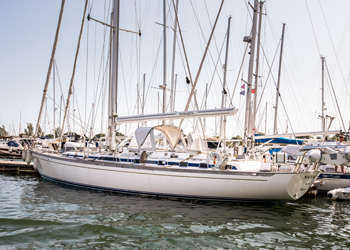