UK to Falkland Islands voyage | R/V SONG OF THE WHALE 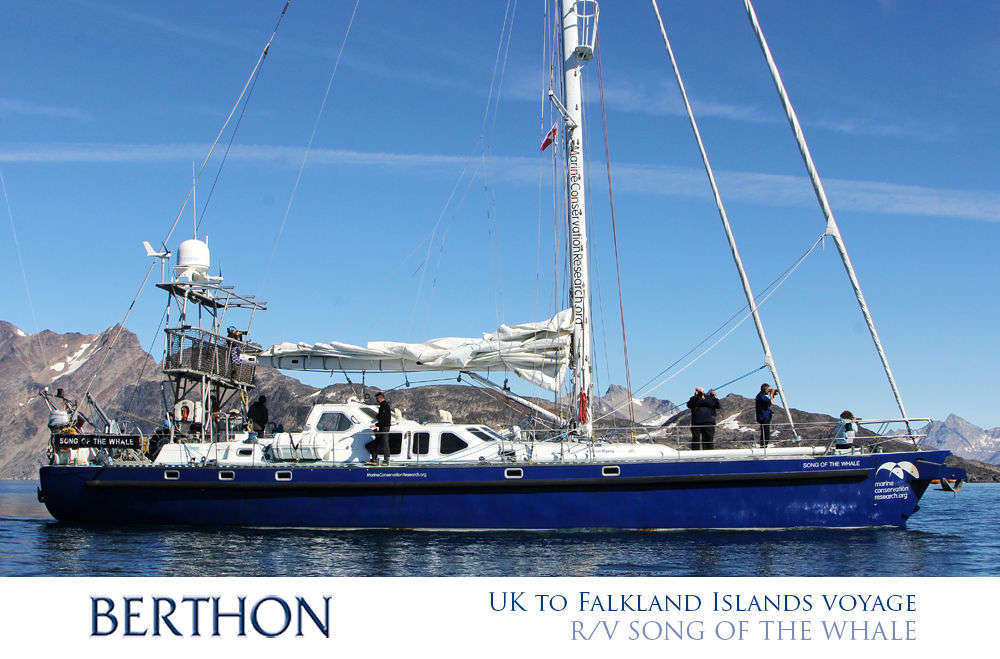 Marine Conservation Research are offering an exciting opportunity to join the team on a research expedition, sailing on R/V SONG OF THE WHALE, from the UK to the Falklands Islands, Southern Ocean departing in early November 2017.

This autumn, the team on board R/V SONG OF THE WHALE will be departing the UK in early November, bound for the Falkland Islands in the Southern Ocean; this epic voyage of 7,000 nm transiting both the north and south Atlantic oceans, (with short stops in the Canary Islands and Cape Verde Islands), is primarily to deliver the vessel to the sub Antarctic for a new research project which will take place in early 2018 (working with British Antarctic Survey). However, the trip, and the generous funds made available by a recent donation  are enabling the team to undertake visual and acoustic surveys for whales and dolphins, as well as potentially to collect data to contribute to ongoing studies of plastic pollution en route, through these remote, little previously studied (and data deficient) ocean waters.

The SOTW team has been undertaking studies of marine mammals (most often whales and dolphins) since 1987, and the data we collect on the behaviour, and the presence, distribution and if possible abundance of animals has been used in a wide range of applications, from supporting the designation of protected areas, to contributing to studies of the movements and population biology (eg through photo-identification of individuals), to reducing threats from human activities such as collisions with ships, and underwater noise pollution. See http://www.marineconservationresearch.org/conservation-successes/ for a summary of some of the projects we have undertaken and their outcomes and http://www.marineconservationresearch.org/downloads/ for reports and a publications list.

This trip offers an amazing opportunity to collect data from areas that have received very little previous study effort; the team will collect passive acoustic and sightings data on cetacean species encountered during the passage – including photo-identification of individual whales (especially any sperm, humpback and right whales) encountered as and when possible. All of our data is made available to third parties to use for conservation management – for example via the OBIS SEAMAP data base (see our team’s data contributions here http://seamap.env.duke.edu/dataset/1158 ), and we support and collaborate with other academics, students and intergovernmental conservation programmes to supply data for conservation (e.g. including population and habitat modelling efforts etc). We provide data sets to students for projects, as well as analysing and publishing results ourselves – recent projects have included studies of the N Aegean Sea (Mediterranean) and Thames estuary (near London, UK) for harbour porpoises, the distribution and movements of minke whales in Iceland, and investigating the presence of humpback whales from their songs in the Cape Verde Islands.

Passing through 100 degrees of latitude, the team will navigate through warm tropical waters, close to the Equator, which provide breeding grounds for large migratory baleen whale species, such as humpback whales, blue and fin whales, and Southern right whales, as well as deep offshore habitats, known to support deep diving toothed whales such as beaked and sperm whales. Then continuing south, the team will head towards the highly productive, austral summer sub-Antarctic feeding grounds for a vast array of marine life (from large whales, to seals, penguins and seabirds). The team will record sea bird, turtle and shark sightings, as well as monitoring levels of shipping, floating debris and will undertake daily sampling tows for plastic particles (to feed into on-going studies of marine plastic pollution in the Atlantic Ocean). Photo-identification, sightings encounters and acoustic data will be shared with groups undertaking ongoing studies of humpback whales, off S. America and the Cape Verde islands. Using techniques developed by the SOTW team, acoustic surveys along the track-line for sperm whales will provide fascinating new insights into the presence and relative abundance of sperm whales (a species that was decimated by commercial whaling, up until the mid 1980’s) along a latitudinal axis covering 100 degrees of latitude.

With your support we have been able to include a dedicated field research assistant as part of the team on SOTW for this trip to act as a guide and data logger for the research and data collection. This is providing an exciting opportunity to a young scientist to work alongside the SOTW team and gain additional experience in conservation science and environmental outreach, as well as generating valuable data sets on the presence and distribution of cetaceans, and on other environmental issues. The grant provided in 2017 will also contribute towards the archiving, sharing, analysis and write up of the data, by a post graduate student (with guidance and support from MCR / SOTW senior scientist, Dr Oliver Boisseau).

We’ve been avid followers of R/V SONG OF THE WHALE for some time… For the bigger picture, you might want to read the following:

An update on SONG OF THE WHALE

She also featured in this years Berthon Lifestyle Magazine XIII, article entitled ‘Why save the whales?’

“HUMANS HAVE A UNIQUE CONNECTION WITH WHALES, FROM WAY BACK IN HISTORY TO THE PRESENT DAY – HAVING DECIMATED THE WORLD’S POPULATIONS OF LARGE WHALES, I BELIEVE WE NOW HAVE A DUTY TO PROTECT BOTH WHALES AND THEIR OCEANS FOR FUTURE GENERATIONS.”